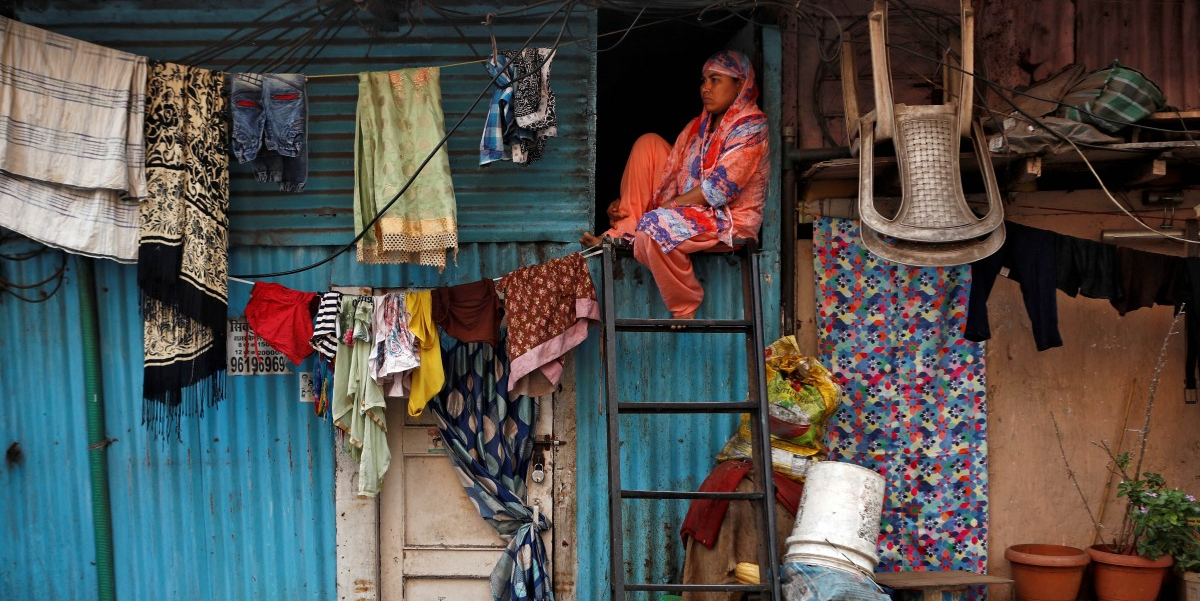 Social policies almost always have multiple, often unintended, consequences. This feature came out sharply, when Prime Minister Narendra Modi declared a nationwide lockdown to arrest the spread of the novel coronavirus without announcing an immediate or near-simultaneous relief package for India’s poorest.

As the fight against COVID-19 unavoidably puts the livelihoods of millions at risk, an ugly truth of Indian society has come out in the open – namely, a large section of our urban workforce barely earn subsistence and are in no position to withstand a five-week lockdown.

Recent media reports about the suicide of a Bihari migrant worker in Gurgaon sparked understandable disquiet and concern, with his wife claiming that he had been “troubled ever since the lockdown started” and that the whole family had been struggling to et food with “no work and no money”.

In a lockdown, ‘high risk groups’ are those with little income and hence meagre savings Just how vulnerable are these high-risk groups?

The table above, collated using National Crime Records Bureau (NCRB) data, brings out a disquieting fact, made more important in the context of dwindling incomes during a lockdown. It shows that – even if the immediate trigger for suicides may vary – income vulnerability is consistently highly correlated with suicide victims, with the proportion of suicides falling drastically in higher income groups.

On average, out of a total of 1.3 lakh suicide victims per year, around two-thirds earned less than Rs 1 lakh annually. Thus, income vulnerability clearly is a crucial component of the matrix of various factors that cause a large number of suicides in India. This provides a strong justification for using suicide data to trace income vulnerable groups or high risk groups in lockdown.

Clearly, going by the suicide figures, daily wage labourers are more income vulnerable than those in the farm sector (a glimpse of which we found from the migrant daily wage earners deciding to walk back to their villages, often without food). 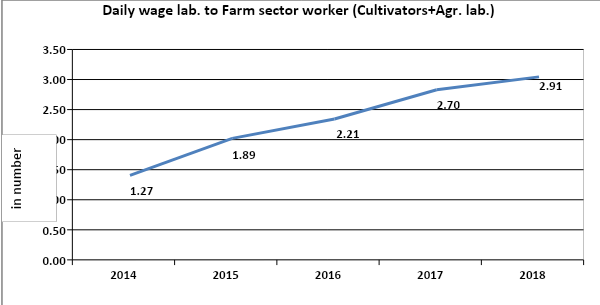 Since we are primarily interested in identifying the vulnerable groups impacted by the loss of livelihoods due to lockdown, therefore, the analysis is restricted to workers alone (for occupation status of students, housewives, unemployed, retired persons etc. remain unchanged with the lockdown). Further, it is disturbing to note that the vulnerability of working population sharply increased between 2014 and 2018; for example, out of 1,31,666 total suicides in 2014, the share of workers’ suicides was 39.1% whereas out of 1,34,516 suicides in 2018, the share of suicides by workers was 48.8%.

These adjustments are done in Figur e2; suicide figures of agricultural labourers are added with daily wage workers and figures for cultivators are added to the self-employed group. Other than the categories mentioned above, the remaining section of the workforce is professional and salaried persons.

Figure 2 below plots the share of suicide by re-defined categories of the workforce and once again the vulnerability of daily wage workers and agricultural labourers come out starkly. Not only their share is throughout the highest, in fact, but it is also continuously rising and has breached the half-way mark.

Figure: 2 Share of suicides by profession (in per cent; only within the workforce) 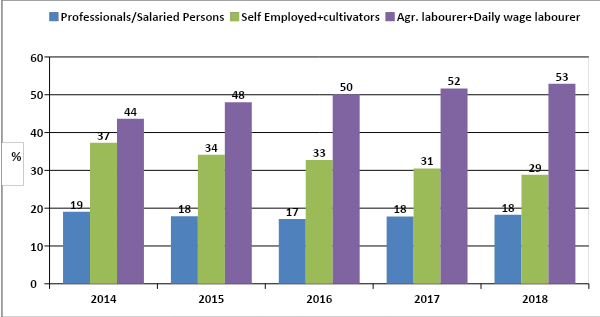 This finding sits well with the wage data for casual workers obtained from Periodic Labour Force Survey (PLFS); as wage growth almost halved between 2011-12 and 2017-18 (compared to 2004-05 and 2011-12), coupled with economic shocks like demonetization and two consecutive droughts in 2014 and 2015, the vulnerability of daily wage workers and agricultural labourers were on the rise.

As expected, with stable incomes, the share of professional and salaried persons was the least among workers committing suicide, without much variation over the years. Between these two categories lie the self-employed and cultivators showing a steady decline in the share of extreme vulnerability throughout the period. However, the vulnerability of the middle segment is self-evident as it accounts for almost 30% of workers’ suicide in 2018.

Table: 2 Yearly percentage change in suicides by profession (in per cent; only within the workforce)

However, the reason for closely monitoring the situation of daily wage workers and agricultural labourers to prepare a targeted economic package need not depend on their higher relative vulnerability alone.

A much stronger case can be made from Table 2. Note from Figure 2, the share of suicides by daily wage workers and agricultural labourers is the highest in 2014 – from this already high base, year to year percentage change in suicides by this group is throughout positive and at least as high as other groups (except 2017, when growth in suicides by Professional/Salaried persons is higher than wage earners – but this is purely because of the low base in 2016; note the negative growth for Professional/Salaried in 2016).

This shows vulnerability – associated with income, for reasons stated above – was consistently rising in absolute terms for daily wage workers and agricultural labourers, even before the lockdown. Evidently, they are going to be the worst affected group during the lockdown requiring greater economic support from the state.

Not only that, but it also has to be done immediately. The incidence of malnutrition is also likely to be the highest among daily wage labourers — the most income vulnerable group.

For instance, anaemia, commonly caused by nutritional deficiencies is highly correlated with wealth status (mostly derived from income) of individuals. The National Family and Health Survey (NFHS) in 2015-16 showed for women (men) in lowest wealth quintile group 58.7% (32%) were anaemic, while, for the highest quintile group this figure was 48.2% (17%). With malnutrition the body is unable to hold out for long, therefore, relief in the form of food rations must be released at once.

This was also the case during the Bengal famine of 1943. As Nobel laureate Amartya Sen has noted in his research, fishermen, transport workers, paddy huskers, craftsmen, other non-agricultural labourers and agricultural labourers were the worst affected in the famine. On the other hand, peasant cultivators and share-croppers were among the least affected groups. This is not to say that an economic package for the cultivators and self-employed will not be necessary; in fact, with the continuation of lockdown, government support has to be intensive (for farmers) and extensive (for salaried in small private enterprises) in coverage simply because there is a limit to which people can live on their savings.

Failure to do so may lead to terrible outcomes; for example, as economist Jean Dreze has pointed out, hungry and feeble people do not always revolt. They may simply die a silent death of starvation or commit suicide.