Head of Emerging Markets at JP Morgan Bank, Jahangir Aziz tells Karan Thapar that if the government does not provide for “extensive income support” India could end up in a serious financial crisis. 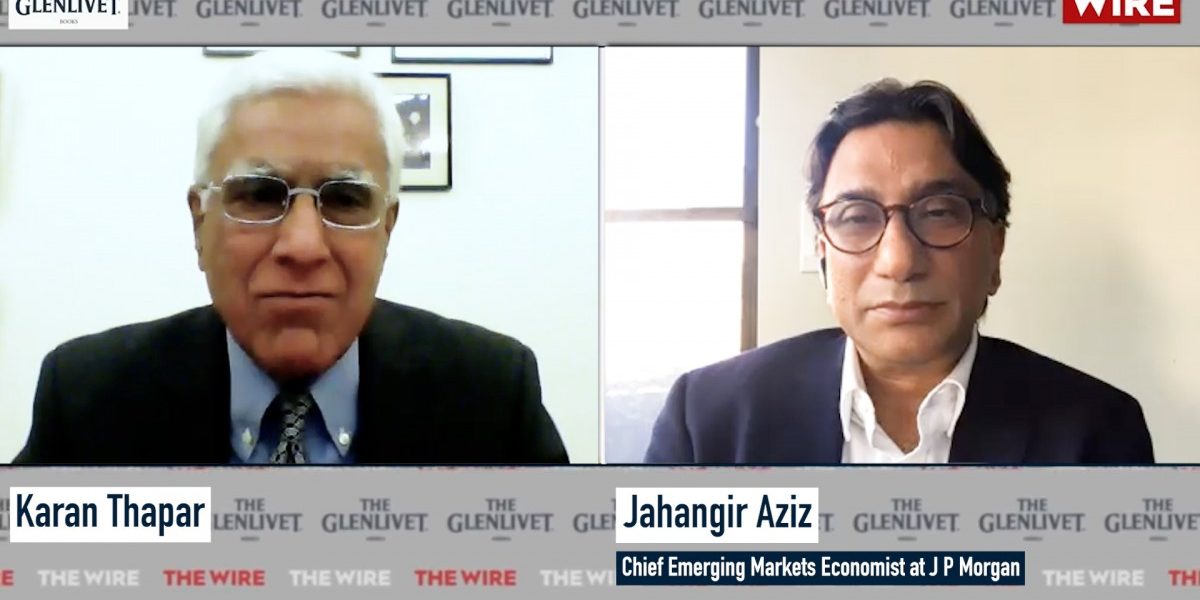 In an interview on the state of the economy as 2020 ends, the Head of Emerging Markets at JP Morgan Bank has both clarified a widespread misconception about the Indian economy whilst sounding a serious note of concern about its future.

Jahangir Aziz says it’s wrong to claim that with Q2 results India has slipped into its first-ever technical recession. That mistaken belief is based upon a misunderstanding of what constitutes a recession.

However, Dr Aziz has also warned that if the government does not provide for “extensive income support” India could end up in a serious financial crisis just about the time when vaccines make an economic recovery possible. If that happens it will seriously obstruct India’s recovery and economic growth.

In a 36-minute interview to Karan Thapar for The Wire, Aziz says that the mistaken belief that India has slipped into a recession arises out of the fact that India compares quarterly economic results year-on-year whereas the practice followed by the majority of the world, including all the major economies, is to compare quarterly results quarter-to-quarter.

DAziz says that although India does not itself do quarter-on-quarter calculations his bank, JP Morgan, has done estimates which clearly show that India’s economy did not slip into recession. The JP Morgan estimate show that in Q1 GDP growth plunged by 25%. However, in Q2 it recovered by 21%. Therefore, India did not experience two consecutive quarters of negative growth, which is the definition of a recession.

However, Aziz points out that India cannot take much comfort from this because the JP Morgan estimate shows that GDP is still about 8% lower than what it was before the lockdown happened. That’s a huge amount.

However, in the interview to The Wire, Aziz went one step further. He said even “six quarters from now India’s GDP will still be about 7% below the pre-pandemic path”. This, he added, means an income loss of roughly $300-billion-a-year across two years compared to the pre-pandemic path. And this, Aziz points out, is a much bigger hit to the economy than almost anyone has anticipated.

Aziz told The Wire that JP Morgan has estimated that this fiscal year India’s economy will shrink 9%. However, next fiscal year it could grow around 12%. But Aziz added a more important point is that even at the end of fiscal 2021-22 the economy could be 8-9% lower than the pre-pandemic path.

In these circumstances, Aziz told The Wire that the Indian government’s refusal to provide greater income support was very difficult to understand and explain. First, he said, one of the paradoxes is the repeated refusal to increase expenditure at home whilst the private sector’s excess savings are so large that India is investing abroad. This, he said, means, “the RBI has been funding other countries’ fiscal deficits”. Since April 2020 this has happened to the extent of $70 billion, which is roughly 2.7% of GDP.

The second point Aziz made is that at the same time the government is refusing to provide income support “wages, employment and earnings of SMEs have plummeted”. Side by side, he added, some 10 million jobs have been lost as the Centre for Monitoring the Indian Economy has reported. This means household and SME balance sheets are in dire straits.

Aziz said if the government doesn’t act immediately to help households and SMEs then, by the time vaccines make a recovery possible, India could have a serious financial crisis on its hands. If that happens it would obstruct or impede India’s recovery and economic growth. Therefore, Aziz called upon the government to provide “extensive income support now”. He said this was not the time to worry about the fiscal deficit. Every major economy has made provision for huge fiscal stimulus packages without worrying about the fiscal deficit.

Aziz said India’s concern that the rating agencies would adversely view a large Indian fiscal deficit and, possibly, downgrade the country is mistaken. When every other major economy is running huge deficits without being downgraded India would not be treated differently.

However, Aziz added, if six or eight months later, when it faces a financial crisis, India is forced to provide the stimulus it has so far not done and then runs a sizeable fiscal deficit, the country would be an outlier and rating agencies would look at the situation very differently.

Aziz confirmed to The Wire that this means India could end up with the worst of both worlds i.e. failing to provide a fiscal stimulus when it’s needed and would be understood by rating agencies only to be forced to do so six or eight months later when agencies would view it very differently and, at that point, might downgrade the country.