Once clarity emerges on product-specific red lines, it will be easier to identify areas of offensive and defensive interests for both sides, and carve out a zone of possible agreement. 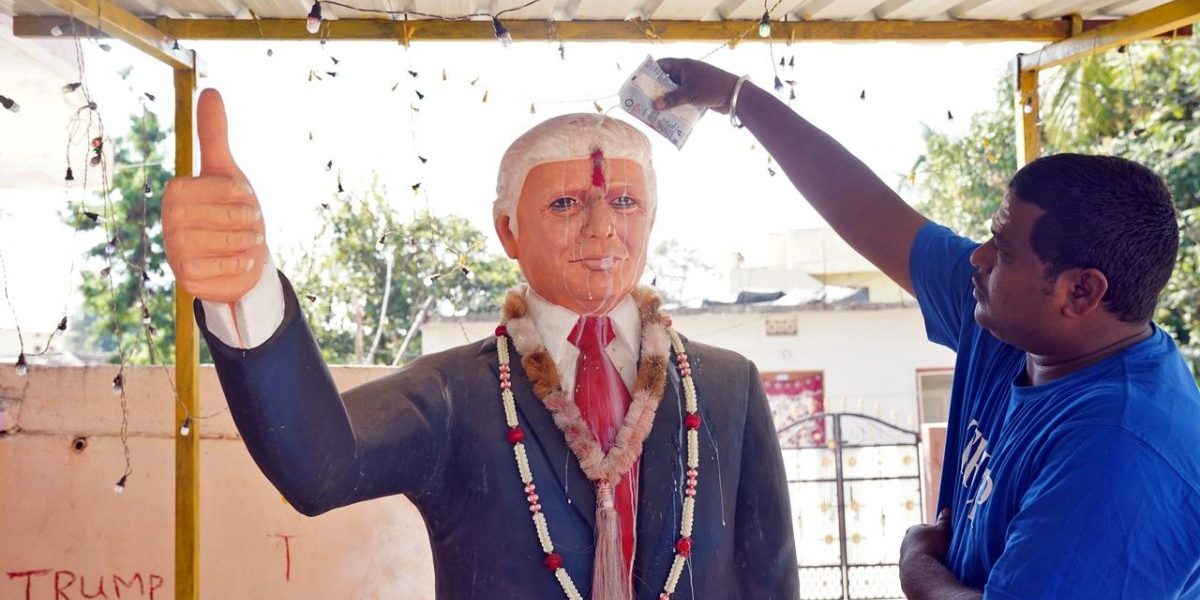 Bussa Krishna, a fan of US President Donald Trump, offers prayers to a statue of Trump at his house in Konney village in Telangana, February 14, 2020. Photo: Reuters/Vinod Babu

United States President Donald Trump will shortly land in India on his first state visit. In the run-up to his visit, Trump has been his chaotic self. He has praised Prime Minister Narendra Modi, exuded excitement about being greeted by a large number of people, displayed hope of a very big trade deal in due course, complained about being treated unfairly by New Delhi and finally, unilaterally removed India from a list of developing countries.

Apparently, the trust factor is missing and that must be restored to enable both countries to become better friends than they are, as they need each other in this rapidly evolving geo-economic world.

Analysed carefully, the practice of personally praising his counterpart while complaining about unfair treatment immediately prior to an in-person meeting has become a standard template for Trump. It is either a pressure tactic or more simply, a message that says ‘Hey buddy, let’s drop all pretense and move forward arm in arm’. Trump’s transactional and revisionist approach, along with his priorities, are also on clear display. America-first, global popularity, and resetting rules of the game are all undoubtedly high on the president’s agenda, just as Modi’s agenda to transform India to a $5 trillion economy by 2025 is based on adopting similar tactics.

India is known for its patience, and adopting a waiting game as a negotiating tactic. This was on full display during the recent negotiations for the Regional Comprehensive Economic Partnership (RCEP).

For RCEP, New Delhi has still not returned to the negotiating table, even though it can. It is perhaps waiting for China to accept her demands, considering its now-weakened position owing to its economic slowdown, coronavirus mayhem and domestic troubles.

While the US will certainly be more difficult than RCEP’s members, there is no reason for India to blink first, particularly on sensitive issues. It should clearly define red lines and non-negotiable items with Washington DC and communicate them intelligently. For instance, despite India hitherto enjoying the status of developing country, and Trump having re-negotiated trade deals with developed countries such as South Korea and Japan, Indian tariffs were still lower than those imposed by these countries in several areas.

Similarly, India should be able to leverage Trump’s love for popularity. For whatever it is worth, Trump could make an entry into the Motera stadium on his favourite Harley Davidson bike, with Modi simultaneously announcing further tariff cuts on the bike’s import, given its negligible market share and limited impact on Indian players. At the same time, Modi should unequivocally convey to Trump that the stadium would not be even half full the next time if US pushes for export of dairy products to India sourced from animals that are fed animal derived blood meal.

Much earlier, the trade relations between US and Europe often floundered on red lines considering different standards and inflexible stances on issues  such as hormone-treated beef, yet these did not come in the way of their Transatlantic bonhomie.

Once clarity emerges on product-specific red lines from both US and India, and political will to sincerely pursue bilateral engagement is retained, it will be easier to identify areas of offensive and defensive interests for both sides, carve out a zone of possible agreement, and devise a glide path to arrive at such a comprehensive agreement.

For instance, India has been willing to diversify its oil and gas imports and balance the uncertainty in Middle East by relying more on the US. It has been reported that India is willing to double its shale oil imports from America from the current six million tonnes per annum. It is also willing to buy more defence equipment from the US and the bilateral defence trade, which was essentially zero in 2008, is likely to reach about $18 billion later this year. 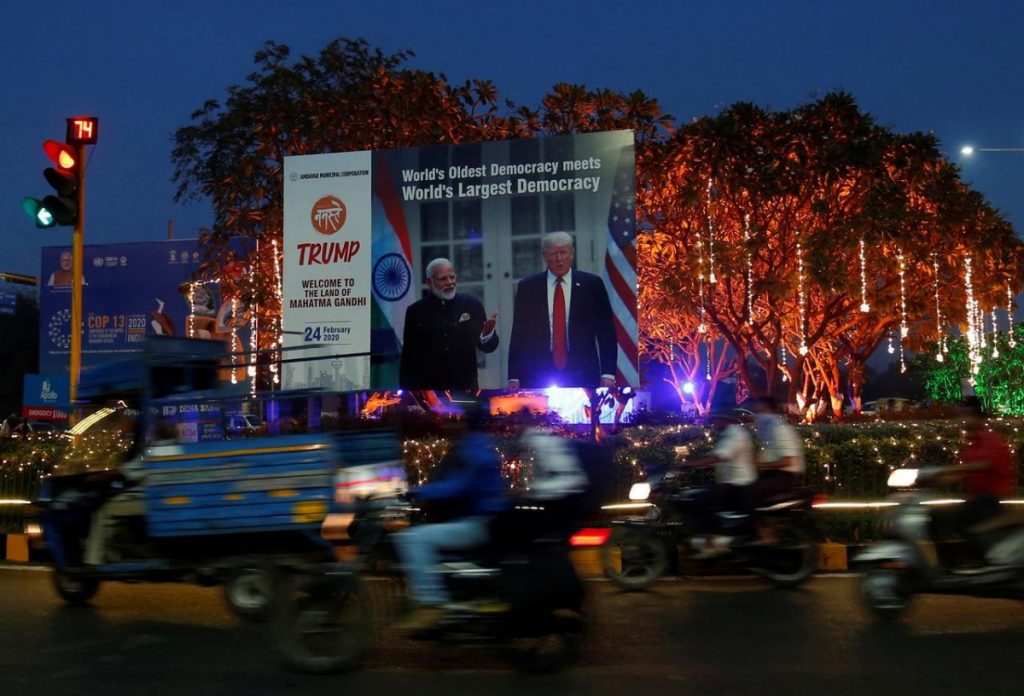 People ride their motorbikes past a hoarding with the images of Prime Minister Narendra Modi and US President Donald Trump installed next to decorated trees alongside a road ahead of Trump’s visit, in Ahmedabad, February 20, 2020. Photo: Reuters/Amit Dave

India should be able to aggressively use these numbers to push for concessions it seeks. Prime Minister Modi should leave no stone unturned to reiterate how such imports would benefit America First policy. Substantial imports from India go one to value addition in the US rather than be consumed domestically. Hence even the trade deficit is much lower than what appears through a simple plus-minus calculus.

Modi would need to summon all his communication, entertainment, and theatrical abilities to convince Trump that India is already doing much more than what it perhaps ideally can. This could help reinstating India in the developing country list and restoring its beneficiary status under the Generalised Systems of Preferences.

As a goodwill gesture, India could also offer rolling back increased cess on medical devices and enhanced duty on shelled walnuts, both of which were announced in the Budget, perhaps to be used in negotiations later. These could be appropriately used to sweeten the deal for Trump.

A much more nuanced approach would be required on certain complicated issues, sensitive for both sides. It has been reported that India and US have signed a knowledge sharing agreement on intellectual property rights, aimed to enrich IPR systems between two sides and foster active cooperation. Given that IPR has been an area of concern on both sides, this is a step in the right direction, will enable both countries to better understand and appreciate each other’s position, and hopefully reach a balanced agreement. This would also help to boost the bilateral cooperation in the area of innovation in many fields, particularly energy and strategic areas.

This template could be pursued in other similar areas of concerns for both sides to engage with a positive mindset and arrive at a mutually beneficial consensus. For instance, India may not outrightly reject America’s demand for reciprocity but adopt a case by case approach. It could clearly highlight areas wherein it would require time and those in which it would require time as well technical assistance and capacity building from US to consider its demands. A broad time frame could also be agreed to build domestic capacity.

Such positive approach and willingness to cooperate could enhance the level of trust between the two countries and would bolster the opportunity of pursuing a comprehensive trade deal. The bilateral trade between India and US is expected to cross $150 billion this year. Both countries are led by leaders of similar nationalistic mindset. The stage is set for pursuing a comprehensive trade deal between two countries. Modi and Trump must shake hands with each other and not let the opportunity slip by merely offering a namaste.

Pradeep S. Mehta and Amol Kulkarni work for CUTS International, a global public policy research and advocacy group with Centers in Washington, Geneva and other capitals of the developing world.