Why It's Time to Reconsider the Commodities Transaction Tax

The imposition of the tax has impacted the international competitiveness and liquidity of the Indian commodity derivatives market and must be reconsidered in the upcoming Budget. 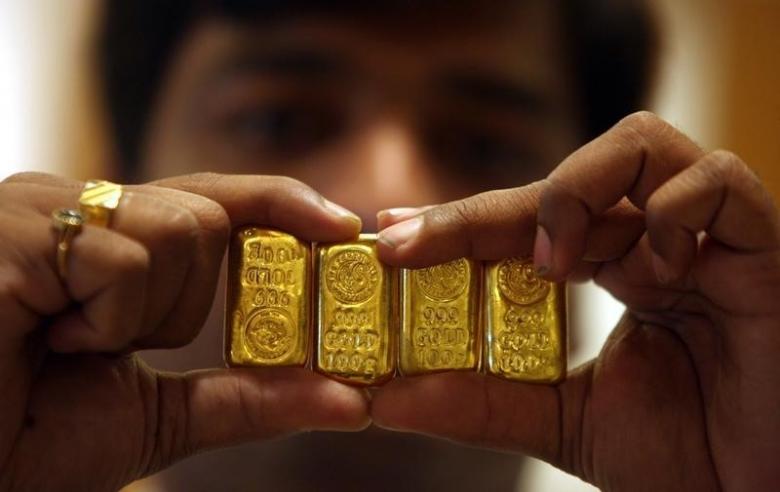 “There is no distinction between derivative trading in the securities market and derivative trading in the commodities market, only the underlying asset is different. It is time to introduce CTT in limited way. Hence, I propose to levy CTT on non-agricultural commodities futures contracts at the same rate as on equity futures, that is at 0.01% of the price of the trade. Trading in commodity derivatives will not be considered as a speculative transaction and CTT shall be allowed as deduction if the income from such transaction forms part of business income.”

Even before CTT was imposed, there were fears that its imposition would severely impact liquidity in the market. On implementation, these fears were confirmed. Turnover in the commodity derivatives market plummeted, from Rs 170 trillion in 2012-13, to Rs 101 trillion in 2013-14 and Rs 67 trillion in 2015-16. Post CTT, average daily volumes on non-agricultural futures such as gold fell by more than 50%, on crude oil and copper by around 60%, and on silver by around 70%. 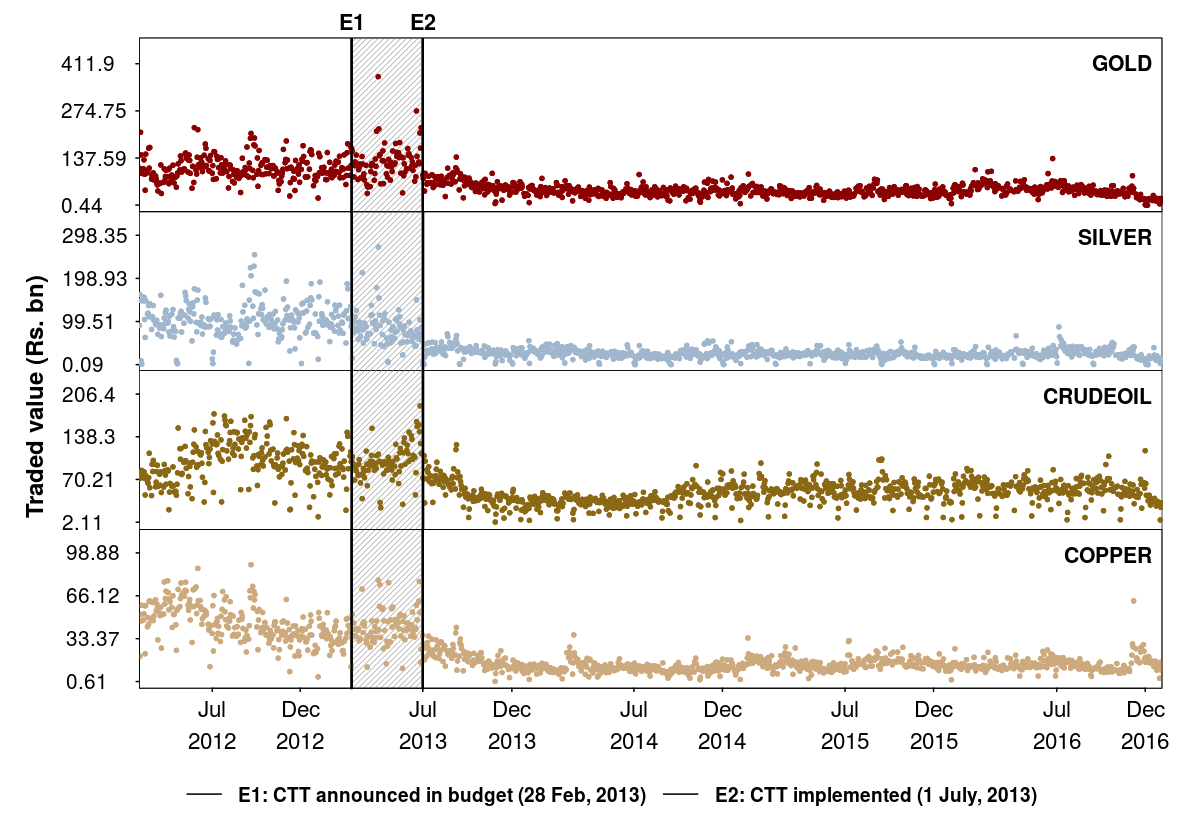 Price efficiency for these contracts worsened. Basis, which measures the gap between spot and the futures prices, also widened. For example, gold futures basis widened from a pre CTT level of 0.41% to a post CTT level of 2.38%. A wider basis adversely impacts the hedging effectiveness of futures contract and reduces their ability to serve as an effective tool for risk management.

In all, we find that the tax imposition severely impaired the market quality of commodity derivatives. And even after three years of implementation, markets are far from the liquidity and efficiency levels that existed pre-CTT, in 2012-13.

The global experience with transaction taxes

Globally, governments have experimented with imposing transaction taxes, but have invariably done away with them mainly because of highly negative unintended consequences that these taxes result in. These consequences are in the form of reduced liquidity and efficiency, as is seen even in the case of commodity derivatives in India, or as migration of trading to markets and countries where such taxes are not imposed, as was witnessed in Sweden in the late 1980s.

From 1984 onwards, the Swedish government imposed various taxes on equity trades, options trades and fixed income trades. The result was that a large proportion of trading moved to London, and Sweden collected far less tax revenue. Eventually, the tax was abandoned by the authorities in 1991.

The Indian rationale for CTT: the parity principle

In India, securities transaction tax (STT) was first imposed in the cash equity segment. The rationale for STT was not curbing speculative activity or volatility, it was easing tax administration. STT, which was imposed and collected at the exchange using a simple rule, was easier to administer compared to a tax on gains from trading, which had to be collected from individual assesses. As a result, the imposition of STT was in lieu of an exemption on long term capital gains tax (LTCG) and a concessional rate of 15% on short term capital gains tax (STCG).

STT on Nifty futures in India was introduced in 2005. From then on, SGX has become the preferred destination for Nifty futures trading. This comes as a cost to the Indian markets, which lose liquidity as well as trading related revenues from these volumes.

The imposition of transaction taxes on derivatives trading is odd. In the cash equity segment, STT coupled with an LTCG exemption, incentivises investors to buy and hold, at least for the period till they become eligible for tax exemption. On the other hand, derivatives markets, by design are of short maturity. Liquidity is concentrated in the near month contracts and there is no question of a LTCG benefit. The only benefit is on account of a unique feature of tax policy.

The stated rationale for CTT imposition was to bring parity between equity derivatives and commodity derivatives market, on the premise that only the underlying asset is different between the two. However, this rationale is flawed, for three reasons. Firstly, there is no question of capital gains tax benefits being coupled with CTT in the commodity markets – as in the case of cash equity –precisely because the underlying in commodities is very different. Secondly, the imposition of CTT on a subset of commodities creates further disparity. For pure farm commodity futures, which are CTT exempt, transactions don’t automatically get the set-off benefit of being ‘non-speculative’, and may get levied with a higher rate of tax. And finally, the notion of parity between derivatives market is not universal. Currency derivatives and interest rate futures still enjoy exemption from transaction taxes.

India is a large producer of many agricultural commodities. In non-agricultural commodities such as bullion, oil and related products, and metals it is a large exporter and importer. Yet, Indian firms use international derivatives markets, both exchanges and over-the-counter, to manage their commodity price risk. Even the government of India or large public sector enterprises, when they choose to, use offshore commodity markets for taking hedge positions.

This makes us price takers, instead of price setters, even for commodities in which we have a large presence through production or trade. The Report of the Standing Council on International Competitiveness of the Indian Financial Sector: Volume 1 (2015) identified tax policy as one of the major factors that hold back the commodity derivatives markets from effectively competing with their global counterparts. Tax policy has an adverse impact on three counts: a) it adds to the cost of trading in Indian markets, b) it adversely affects market quality by depressing asset prices, reducing liquidity and efficiency, and c) ambiguity in tax policy, such as a system of selective imposition/exemption, creates uncertainty for market participants and disincentivises trading.

Commodity exchanges in Dubai (DGCX) and China (DCE, ZCE and SHFE) are actively competing to become regional hubs for commodity derivatives trading. Volumes on these exchanges have risen significantly over the last three to four years. In contrast, volumes on Indian exchanges have declined. As an example, the number of contracts traded on the SHFE increased from 365 million in 2012 to 842 million in 2014. During the same period, MCX volumes declined from 389 million to 134 million. Factors such as imposition of CTT as well as other issues such as regulatory uncertainty have actively contributed to the declining competitiveness of the Indian commodity derivatives exchanges.

In a recent speech at the inaugural ceremony of India’s first international exchange, the India International Exchange (INX) at the Gujarat International Finance Tec-City (GIFT), Prime Minister Narendra Modi said that in the next ten years, the GIFT city should become a price setter for atleast few of the largest traded instruments in the world, whether in commodities, currencies, equities, interest rates derivatives or any other financial instruments. While the setting up of an international exchange is laudable, one should not lose sight of the trading activity on the exchanges in the Indian mainland. The national exchanges already have some market. These exchanges have a full ecosystem of market infrastructure, products and participants in place. If suitably enabled, they can become price setters, specially in commodities where India has a large market share in the underlying. This task should be given a higher, if not equal priority to developing offshore financial centers.

The status of a “price setter” can be achieved once the mistakes in regulation and tax policy are comprehensively addressed. Removal of transaction taxes could be an immediate step in this direction. As per the Budget estimates of 2016-17, the combined revenues from STT and CTT constituted less than 0.71% of the total tax revenue. A removal of this tax will thus not have a significant impact on the exchequer. On the other hand, higher traded volumes from the removal of the tax are likely to compensate for the lost tax revenues in the form of higher capital gains and service tax. With only a few days left in the announcement of the Union Budget 2017, it is time to reconsider and rework the commodities transaction tax.