The CSI and BAI indices have declined to their lowest levels since the Modi government came to power in 2014.

New Delhi: A set of new surveys conducted by the Reserve Bank of India (RBI) on consumer confidence in the economy, as well as how the country’s manufacturing sector has been impacted by the slowdown, reveals an unflattering picture.

Taken together, they point out how the two major drivers of the Indian economy, investment and consumption, have indeed slumped over the last few months.

The central bank’s ‘consumer confidence survey’ – which is conducted in 13 major cities and across nearly 5,200 households – shows that sentiment around income, employment and discretionary spending has declined to levels not seen since Narendra Modi came to power in May 2014.

The survey produces two indexes: the current situation index (CSI) and the future expectations index (FEI), which record how consumers feel about the economic situation, income, spending, employment and price levels for the current period and the year ahead.

As the table below shows, it was 108 when Modi came to power in May 2014 and has not dipped below 90 in the last five years.

“Respondents perceived an increase in the price level over the last one year and a majority of them expect prices to rise further in the coming year; as a result, sentiments on overall spending as well as essential spending remain strong, though sentiments on discretionary spending weakened,” the survey noted.

The second analysis that the RBI has released is the 87th round of the ‘Industrial Outlook Survey’, which asks over 450 manufacturing companies how they felt about the business climate for the July-September quarter and their expectations for the same in the next quarter.

This survey produces what the central bank calls the ‘Business Assessment Index (BAI)’, which fell sharply to 92.5 in Q2 FY’20 compared to 108.5 in the last quarter.

As the chart below shows, the BAI has not dipped below 100 since May 2014, when the BJP-led NDA government came to power.

Other key findings from the survey include a slump in “order inflows” and pessimism surrounding profit margins.

“Respondents assessed that there was a slump in order inflows, output and employment conditions in Q2:2019-20. •

Sentiments on the overall financial situation reflected lower optimism on availability of finance from internal accruals, bank finance and overseas sources in Q2:2019-20. •

Cost pressures emanating from interest payments on borrowings, purchase of raw materials and salary expenses were assessed to have softened in Q2:2019-20, but manufacturers were pessimistic about profit margins in view of slack demand and negative sentiments on selling prices.”

The final survey is the ‘Order Books, Inventories and Capacity Utilisation Survey for the April-June 2019 quarter, which covers over 800 manufacturing companies.

This assessment usually provides a snapshot of demand conditions in different parts of the country’s manufacturing sector. 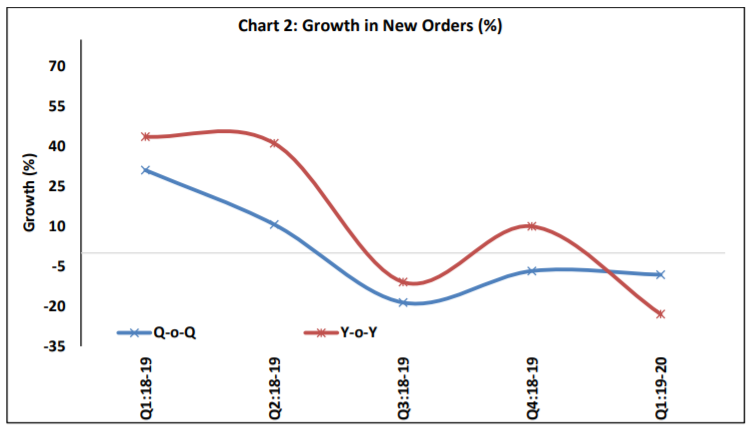 On almost every metric, there has been a slump. This includes capacity utilisation (which declined to 73.6% in Q1 FY’20 from 76.1% in Q4 FY’19) order books (third successive quarter of decline) and an increase in the raw material inventory to sales ratio (on account of moderation in sales).