The Social Realities of India's Electrification, in One Map

Many of the social realities about actual electricity access can emerge from a new dataset – but will governments choose to accept them? 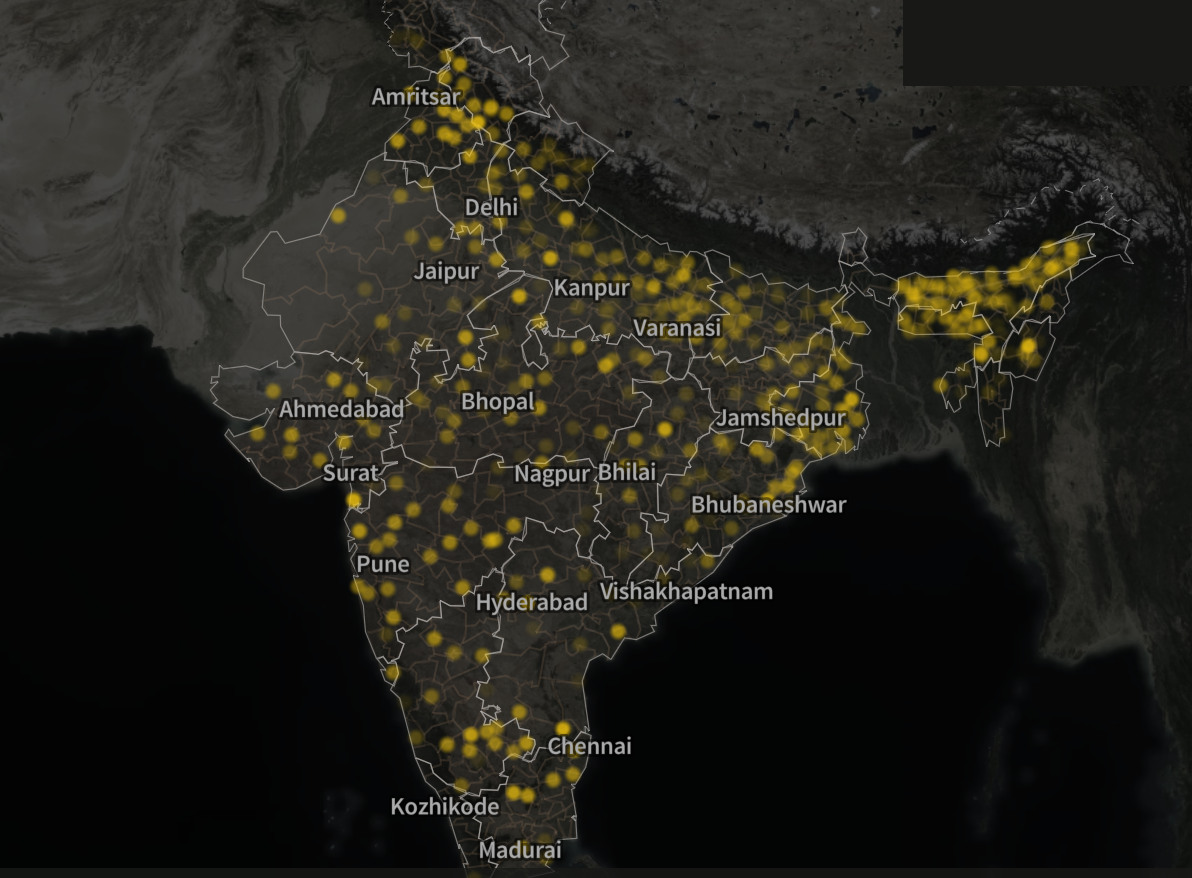 A screengrab of the India Lights visualisation. nightlights.io

How would the world look if watched from the night sky?

The development of satellite imaging technology has made this question less rhetorical over time. Ironically, it’s increasing light pollution – higher electrification and poorly designed artificial lighting (throwing lights upward rather than down) – that has made stars less visible from cities. The more visible we are from the night sky, it seems, the less visible it is to us.

Looking at Earth from above can bring out a whole set of stories. A social history of India, specifically on the segmentation and differentiation in access to public goods, is coming from an unlikely source: satellite images of the country taken at night.

In an ongoing project to track night lights, and electrification through this, in Indian rural areas, researchers at the University of Michigan have processed 20 years (1993-2013) of combined satellite data from space agencies around the world. The India Lights project has now released its findings, consisting of a massive 4.4 billion data points across 600,000 Indian villages. In order to make this data publicly accessible, they have also created a fascinating interactive map that helps track the evolution of electrification over this time span. A screengrab of the India Lights visualisation. nightlights.io

The website also provides interesting tools for policy analysis. For instance, you can isolate villages that were covered by the Rajiv Gandhi Grameen Vidyutikaran Yojana (RGGVY), launched in 2005 and now subsumed under the Deendaya Upadhyaya Gram Jyoti Yojana, and see how the patterns change (or don’t) in the following years. Of the 100,000 villages that came under this scheme, 47,000 can be followed on India Lights. You can also track the changes during the tenure of a specific government, such as the increase in light output in UP’s Hardoi district when an energy minister for the state was appointed from that district.

Comparing the data from this project to that of the government’s Central Electricity Authority is interesting as well, thanks in no small part also to the government’s rather broad definition of what counts as an “electrified village”, though it must be said that even this is a big step up from previous definitions. In addition to public buildings like schools, health centres and panchayat offices being electrified, a minimum of 10% of the households in the village should also have a connection. Even if you ignored this small number, the definition doesn’t account for the consistency of the electricity supply. Even if a village received only a couple hours of electricity a day for a few days in the year, it can be deemed electrified.

So, what ‘increasing electrification’ really means, and what segmentations come with it, can be gleaned from this map.

Madhya Pradesh has been hailed as a success story for rural electrification, with almost all of its villages officially electrified by 2010-11. According to the Government of India’s Central Electricity Authority, 97.2% of the villages in MP were electrified by the end of 2013. This map has a different story to tell, however. It has MP as one of the country’s lowest night light producers, with high intra-state variation. Unsurprisingly, brighter areas (i.e. more electrified villages) are in districts that have slightly higher urbanisation rates: Indore, Bhopal, Gwalior. Some of the darkest districts are those with a higher tribal population: Alirajpur, Dindori, Mandla, Anuppur. These very gradual increases have been completely in-line with pre-existing regional variations, even cementing them further. While the government in Madhya Pradesh may be close to reaching its stated village electrification targets, differentiation in terms of who has useful access to electricity is still rampant. Light output increase is substantially lower here than in several other states, such as (but not limited to) Kerala. In fact, increase in night-light output has been highest in Punjab and Haryana in the last two decades. This is particularly noteworthy considering both states had supposedly achieved 100% rural electrification much before the first year of this dataset, 1993. The beginnings of Punjab’s rapid increase aligns with the state government’s Rs.140 crore grant in 2007 to provide uninterrupted power supply across the state. But 2011 saw a dip, partly due to heavy losses incurred by public sector undertakings, much of which was blamed on rural electrification subsidies.

Jharkhand is another interesting case to look at. The state has claimed an extremely high rate of rural electrification with 93% of villages being electrified in 2015, up more than 50% from the early 2000s. The map shows some increase in night-light output from the state but a more gradual climb, with an increased pace, only in 2013. Before that, much of the increase in light output came from the districts of Ramgarh (corroborated by local news) and Dhanbad (which is urbanising faster relative to the rest of the state). The Ministry of Power is continuing its rural electrification drive in Jharkhand, though as this map reveals this doesn’t mean access to electricity is increasing at a similar pace. Many of the social realities about actual electricity access can emerge from this dataset – but will governments choose to accept them?