The Ugly Underbelly of Make in India

A shocking new report on the automotive sector questions whether manufacturing in India can ever deliver on its promises without offering a safe environment for workers. 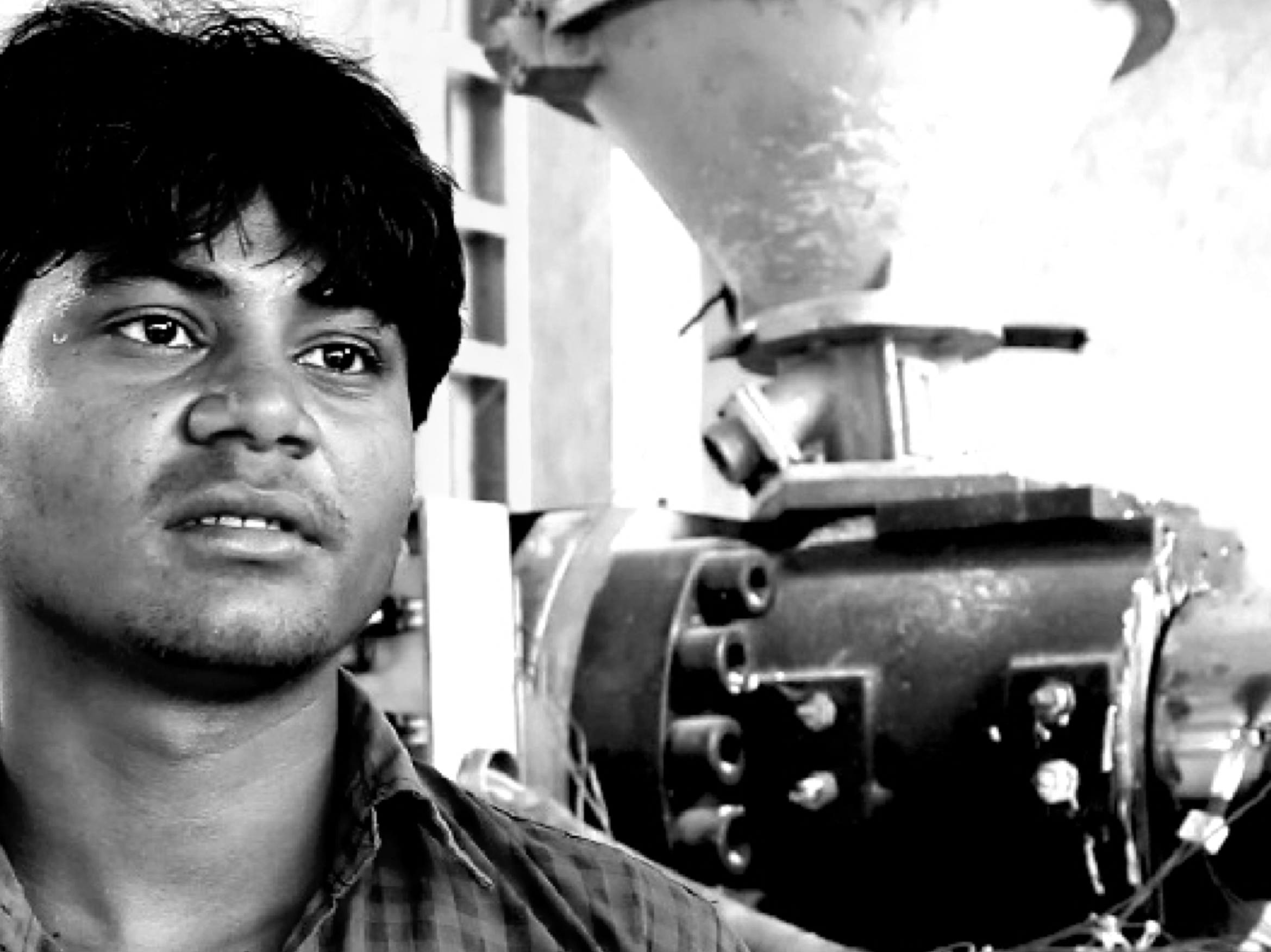 23-year-old Ravi hails from Aligarh, Uttar Pradesh. He oper- ated an injection-molding machine in a small tier-3 factory that manufactures spare parts for heavy vehicles. On his fifth day on the job, there was an unexpected malfunctioning of the machine and it closed down on its own. Before he could switch off the machine, Ravi’s hand got caught in the machine and he lost four fingers and part of his left palm. The employer paid for his treatment but is now demand- ing a return of the treatment expenses. The employer also refuses to give his salary on time and is instead coercing Ravi into handing over the ESI com- pensation payment.

New Delhi: With the Indian auto industry – which produced 23.37 million vehicles in 2014-15 and attracted FDI of $12.2 billion between 2000 and 2015 – all set to play a central role in Prime Minister Narendra Modi’s call to “Make in India’’, an alarming new report on shop floor injuries in the automotive sector has questioned whether “Make in India” can be successful without first ensuring that manufacturing is ‘safe in India’.

The report – What Can Safeguard Workers? – jointly produced by Agrasar and SafeInIndia, a new civic initiative launched by former IIM graduates, Sandeep Sachdeva, Ravi Gulati and Prabhat Agarwal, and was released in Gurgaon on Tuesday.

With an estimated workforce of 80,000, the auto industry in the Gurgaon-Manesar region near New Delhi is one of the largest automotive hubs in India. Of these, over 1,000 workers meet with serious industrial accidents every year – a rate of incidence that is testimony to the casualisation of labour, non-existent training, long working hours, poor pay and absence of basic safety in the automotive sector, and especially in ancillary units.

The report points out through 20 case studies the complete apathy of most of the companies – owners, managers and contractors – towards the plight of the injured workers, most of whom are left with permanent disabilities and a consequent loss of employment and income. “This happens despite a slew of safety laws and monitoring agencies… Such incidents are only increasing by the day,” claims the report.

The summary of the 20 case studies provided by the report makes for grim reading:

Based on accidents in the automotive industry in Gurgaon, case studies and stakeholder responses, the report notes how rarely these accidents come to the attention of the national media. One such instance was in August this year when an industrial robot killed a 23-year-old employee of an automobile factory while the employee was trying to fix a metal sheet that had been dislocated. “It was subsequently reported that in this factory, 113 out of 118 robots lack sensor barriers,” the report, said pointing to the abysmal adherence to safety norms by most companies.

Worse still, the report expresses the fear that there has been a gross under-reporting of accidents in the region and indeed across India. “In 2005, the International Labor Organization published a report on work-related accidents around the world. It pointed out a strange anomaly: India had reported 222 fatal accidents that year, while the Czech Republic, with a working population of about 1 per cent of India’s, had reported 231. The ILO estimated that the “true number of fatal accidents” taking place in India every year was 40,000. However, as a result of under-reporting, the total number of fatal accidents recorded in a year is much below the actual number of accidents.”

The report said the Delhi-Gurgaon-Faridabad region is home to many Original Equipment Manufacturers (OEM) and sub-contractor manufacturers ranging from Tier-1 to Tier-3 who employ over 80,000 workers in factories across the region.

However, to keep their cost of operations low, many a times these companies overlook the aspect of safety for their employees. “Unsurprisingly, while laws regarding work place safety, post-accident care and compensation do exist, there is an absence of strong and effective institutional mechanisms to support their implementation. This had led to unnecessarily hazardous working conditions, a low level of safety consciousness and training and inadequate post-accident treatment, care, compensation and rehabilitation. Injured workers are, therefore, often left with long term psychological and physical damage, with its consequent financial implications.”

Through interviews with 20 workers who suffered serious injuries, the research has highlighted how in 80 per cent of the cases there was no training provided to workers.

Credit: From What Can Safeguard Workers?

Consider the case of 18-year-old Suraj from Bulandshahr, Uttar Pradesh. He had just taken up his first job with a small Tier-3 manufacturing unit and was on his third day at work when due to total lack of experience he held the machine cap of the object in a wrong manner due to which the die press got stuck and his right hand was caught in the press shop machine. He lost two fingers of his right hand. Still recuperating, Suraj is now extremely scared of working in a similar environment again. He has hidden the accident from his parents and family back home for fear of upsetting them and their plans for his sister’s wedding.

Suraj’s case illustrates how without any training, young workers are often asked to operate a press shop machine, especially ones which lack any safety mechanism. Suraj’s uncle, who owned the unit, took the responsibility of treatment, but the boy has received no other support. Though a permanent employee with the factory, he did not have an ESI card and is not even aware about the scheme or its benefits.

The report found that workers who get injured for no fault of their own can end up losing their job and livelihood. Surender. Credit: From What Can Safeguard Workers?

One such case is of 20-year-old Surender from Alwar in Rajasthan who operated a forklift machine in a Tier-2 auto component manufacturing unit Gurgaon. A new worker with no training was asked to work on a powerful machine right away and his inability to control the machine caused serious injury to Surender’s left leg. Again, the machine came with no safety mechanisms.

For Surender, a contract worker who was not on the rolls of the company, the consequences of his accident were severe. Not only did he suffer a grievous injury, in the absence of the employer helping him, he had to sell his family land to cover his treatment cost. Though the contractor initially spent Rs 4 lakh on his treatment, Surender has been bearing the subsequent expenses on his own. Surender possessed an ESI card, but the ESI hospital claimed that it was invalid even when he had got it renewed from the branch office of ESI.

The research also highlighted how there were significant shortcomings in inspections of these factories; how no automatic safety control system existed in 70 per cent of cases; quality safety gear/equipment was completely absent in all units; less than half the workers had ESI cards prior to the accident; and how nearly 75 per cent of the workers were under 23 years of age.

In most cases, the approach of the employers was found completely apathetic following the accidents. Despite India having a good legal framework in the form of the Factories Act, 1948, the Employees’ Compensation Act, 1923, Contract Labour (Regulation and Abolition) Act, 1970 and the ESI Act (and other related acts) for the protection of workers, 18 of the 20 workers lost their jobs after the accidents. With 19 of the accidents being reported in Tier-2 and Tier-3 factories, the report said it was also a pointer to shortcomings that exist in the safety protocols and infrastructure in such units.

Raja Shah. Credit: From What Can Safeguard Workers?

The research also revealed that there were “significant shortcomings in ESI facility inspections and in recruitment of doctors; lack of basic amenities and equipment at ESI designated facilities and often apathy among the ESI officials in monitoring the overall ESI service delivery process.”

In view of these findings, the report has suggested the need to “improve safety consciousness among workers as well as manufacturers” through their training; improvement in supply chain safety audit from OEM/Tier 1 manufacturers and sharing of best safety practices in the industry for long-term productivity gains.

For improvement in treatment and rehabilitation of injured workers, the report has called for better and immediate post-accident treatment, a more effective ESI process and a system to identify appropriate roles for injured workers.

It has also suggested better implementation of labour laws and safety regulations, addressing shortage of safety inspectors and revision of antiquated laws as means of improving the lot of workers.