How Believable are the Modi Govt's Tax Revenue Projections for FY'21?

To achieve the budget estimates for FY'21, central taxes may need an annual growth rate of close to 30%, which based on past numbers is highly unlikely. Taxes are the biggest source of revenue for the Indian government. In 2017-18, out of the combined Centre-state estimated expenditure of Rs 48.6 lakh crore, about Rs 30 lakh crore (62%) was to be financed through tax revenue. And, out of all taxes that the governments (Centre and state combined) are able to raise, about 63%-64% comes from central taxes.

Some central taxes, most notably cesses and surcharges, are not part of the divisible pool. As such, revenue raised from the central taxes is crucial not only for the financing of the Central government’s schemes, but also for that of the state governments. Moreover, the tax revenue raised can be used for the counter-cyclical policies by the government, which is the need of the hour given the slowing economic growth. Because of these reasons, tax revenue numbers presented in the budget are always looked forward with great interest.

In the Union Budget 2020-21, the central tax revenue for the financial year (FY) 2020-21 is estimated to grow at a healthy 12% annual growth rate. However, the budget also notes that the revised estimate (RE) for tax revenue collection for FY 2019-20 is Rs 21,63,423 crore against the budget estimates (BE) of Rs 24,61,194 crore – a shortfall of Rs 2,97,772 crore, or about 12%. This confirmation about less than estimated tax revenue collection has been manifesting in various forms over the last few months, such as spending cuts to curb deficit, non-payment or delayed payment by the government, higher borrowing than estimated and lower transfer to states.

Such a mismatch between budget estimates and revised estimates/actuals are not necessarily a new phenomenon, as can be seen from the following figures, which provide the gap between budget estimates and revised estimates/actuals of the tax revenue in the Union Budget for the last 10 years. Negative numbers in the following figure indicate that RE/A numbers were lower than BE, and vice versa.

Essentially, budget estimates of revenue collection are expectations about the future, and there are a number of factors that can affect tax collection, such as economic growth and international trade. Some occasional random events such as drastic fall in the international price of crude oil can also affect the tax collection as it happened in 2015-16 and 2016-17, when the Union government increased the taxes on petroleum products and received a windfall revenue gain. This large gain in tax revenue resulted in actual collection being higher than estimates. Because of variations in the factors which determine the tax collection, a certain degree of deviation in tax revenue from budget estimates is to be expected.

However, the last two years are different from previous years on two counts:

2) The large gap of 12% in 2019-20, even when the budget was presented in June due to the 2019 general elections, as opposed to February in regular years. This late budget provided data for four more months than usual, yet the estimates were off the mark by a wide margin.

Part of the large shortfall in tax revenue in 2019-20 is due to the corporate tax rate cut which was done in September 2019, after the budget was presented in June. However, even the tax base excluding corporate tax has seen the shortfall of more than 8%. Some commentators have argued that this increased gap between budget estimates and revised estimates/actuals could be due to the budget date being shifted from February 28 to February 1 in 2017-18. Because of this advancement of date, the government has to make estimates based on comparatively fewer/older data. However, this can only explain the gap for FY 2018-19, and not for FY 2019-20 when the Budget was presented in June.

Another argument has been that the government is not utilising the latest data available for the Budget. This does seem to be the case, at least partially, because the numbers presented in the 2019-20 and 2020-21 Union Budgets are certainly not in line with the tax revenue data presented by Controller General of Accounts (CGA), which is the actual data for government finances up to last month.

For example, the RE number for FY 2019-20 given in the Union Budget 2020-21 for the Centre’s share in central tax collection is Rs 15,04,587 crore; while according to the CGA’s website, the tax collection till the end of December 2019 is Rs 9,04,944 crore, or only about 60% of the RE. And, while it is true that January-March quarter see the largest tax revenue collection, numbers from previous years are show that till December 2018, 71.1% of the revenue was collected. 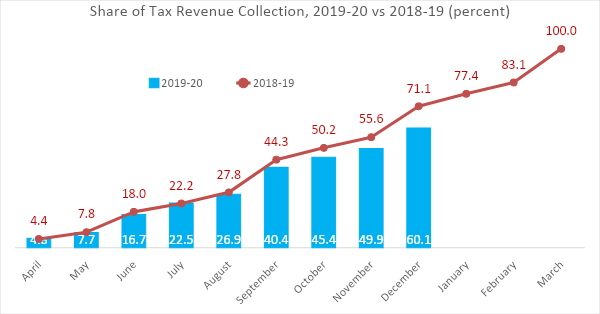 Source: Data taken from CGA’s website. The numbers are based on actual collection for 2018-19. The website gives a YTD number for 2018-19, but used the base of BE numbers for calculation, hence both are not comparable.

This essentially means that the actual collection for gross central taxes in FY 2019-20 is likely to fall short of about another Rs 3,00,000 crore compared to estimates given in the Union Budget 2020-21. And to achieve the BE numbers for FY 2020-21, the central taxes will need an annual growth rate of close to 30%, which based on past numbers is highly unlikely.

Suraj Jaiswal works with Centre for Budget and Governance Accountability (CBGA), New Delhi. He can be reached at suraj@cbgaindia.org. Views expressed are personal.