Social Security For All of India's Informal Workers is Possible. Here's How.

India’s Social Security Code 2020, which merges eight existing laws, will not do enough to ensure a safety net for informal workers. Workers demanding equal wages and social security benefits during a convention organised by the All India Central Council of Trade Unions (AICCTU) at Jantar Mantar in 2018. Photo: Akhil Kumar

As much as 91% of India’s workforce of 475 million is informal, and therefore lacks social insurance. This includes everything from old-age pension and disability insurance to maternity benefits.

The latest government effort on the social security front is India’s Social Security Code 2020 (SS Code), which merges eight existing laws. However, we find the SS Code wanting and hence spell out the principles and design that, going forward, should guide government efforts to ensure social insurance for informal workers.

In 15-20 years, India will become an ageing society. Its demographic dividend will be over; GDP growth will slow and millions will need old-age pensions. Is the country prepared for this?

Issues with the Social Security Code

The SS Code 2020 amalgamated eight existing social security legislations, most of which dealt only with formal enterprises, not informal ones; that bias still exists in SS Code 2020. Merging a number of Acts does not amount to an advance upon the eight pre-existing Acts. The objective of a single Code cannot be to merely consolidate Acts that in 7 out of 8 cases belong to the 20th century. Second, a social security system cannot be dependent upon the size of enterprise, defined by number of workers. However, the Code relies upon a system of thresholds defined by the number of workers employed in an establishment [e.g. 10 workers for Employee State Insurance Corporation (ESIC), 20 for Employee Provident Fund Organisation (EPFO)].

Third, a principle that any country needs to recognise is that there should be a vision and goal to universalise social insurance within a defined time frame. The SS Code 2020 passed by India’s parliament does not. Fourth, all establishments should be registered on a mandatory basis, and workers working for them should also be registered by the same enterprise. There is no such provision in the SS Code 2020.

Fifth, any social insurance currently available to informal workers is voluntary (Atal Pension Yojana, Shramjivi Maandhan). SS Code (2020) should have made social security mandatory, and within 10 years, all unorganised workers in whatever sector could be covered. It did not.

The design and architecture

India can provide social security to its informal workers. The plan is fiscally and administratively feasible. Many informal workers fall below India’s national poverty line – they constituted 22% of the country’s population in 2012-12, the last year for which official poverty estimates are available. Globally, there are three ways to fund a national social insurance system: contributions by employer and employee; non-contributory by either, where premium costs are met from government tax revenues; and a combination of the two methods.

Given the high differentiation among different groups of informal workers in India, there is a case for three categories of beneficiaries. One, non-contributory for the poorest (where government meets the cost from taxes). Two, partial contribution by the non-poor regular (but informal) wage workers as well as the non-poor self-employed, complemented by government subsidies towards their contribution (as found in many Asian countries), while employers make the full contribution. And three, for the formal workers, full employer and employee contribution under the EPFO system.

To eliminate fragmentation, the first two should be part of the same system, since they are the unorganised informal workers. The third category already consist of government and private formal workers in organised enterprises.

The cost and financing

We estimate that the total cost of covering the poor 20% of the population comes to Rs 137,737 billion (or Rs 1.37 trillion to cover all the poor elderly, the pregnant and the costs of death/disability) in 2019-20. This would cover only the bottom two deciles of the worker population, i.e. the designated poor (based on the Socio-Economic and Caste Census). This amount could be compared with the Union government’s annual total expenditure under all heads of approximately Rs 34 trillion in 2019-20. In other words, the total cost of social insurance for poor informal workers, we estimate, is 0.69% of GDP in 2019-20 (ie at 2019-20 prices); since this will be shared equally between central and state governments (on a 50-50 basis), the cost to all state governments together will barely be 0.35% of GDP annually; similarly for the Union government it will be around 0.35% of GDP.

The cost will decline with each year as a share of GDP to 0.61% of GDP in the fifth year, after assuring benefits to the existing stock of all types of beneficiaries in the first year itself, who are currently uncovered. 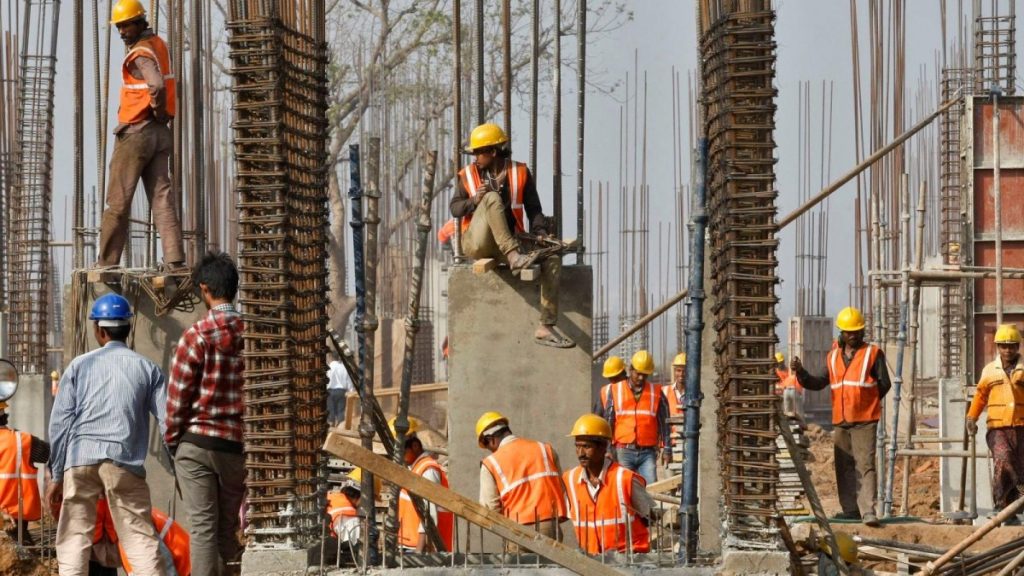 We have estimates on what the Union and state governments are currently spending annually from the consolidated fund of India. In 2019-20, according to the Ministry of Labour and Employment (MOLE) Annual Report, the total expenditure on social insurance is approximately Rs 19,000 crore. However, Rs 18,000 crore of this is on organised sector social insurance (Rs 5,097 crore on the EPFO Employees Pension Scheme, Rs 12000 crore on ESIC). The remaining schemes absorb minuscule amounts of funds (Rs 155 crore and Rs 300 crore in 2019-20) for two unorganised worker schemes.

However, state governments of India spend much more on social security: Rs 146,629 crore. Annually. These are expenditures for all states of India on a head called ‘Social security and welfare’. However, to clarify, these are all citizen-centric schemes, and are not intended to provide comprehensive coverage to informal workers – which is our intention. What is clear, though, is that the state governments are already spending a significant sum, which in our view, should be redirected to cover all informal workers. Citizens, meanwhile, who are not workers could still be captured in social assistance schemes.

This schema outlined above, cannot be implemented without all informal workers being registered. A beginning has been made with the E-Shram Portal (of MOLE), where 212 million workers have been registered by January 2022. However, this is very short of all informal workers. We have elsewhere shown how the rest can be registered (including own-account workers and farmers). Given the political will, this is administratively feasible.

The cost is fiscally feasible, since covering the poorest will require only 0.69% or less of GDP per year, over the next five years. Covering the non-poor, through a contributory (for employers of regular workers that constitute a quarter of all Indian workers) and subsidised for employees, the scheme would require additional fiscal costs, which can be met from growing tax revenues from a growing GDP, once India is a rapid growth path again – five years down the road.