As Scaling Effects of Research Productivity Diminish, India Must Step up R&D Investment

Advanced economies may be facing declining returns on research effort. This makes it all the more imperative that the Modi government gets its house, with regard to R&D, in order.

An employee works inside a laboratory at Piramal's Research Centre in Mumbai August 11, 2014. Credit: Reuters/Danish Siddiqui/Files 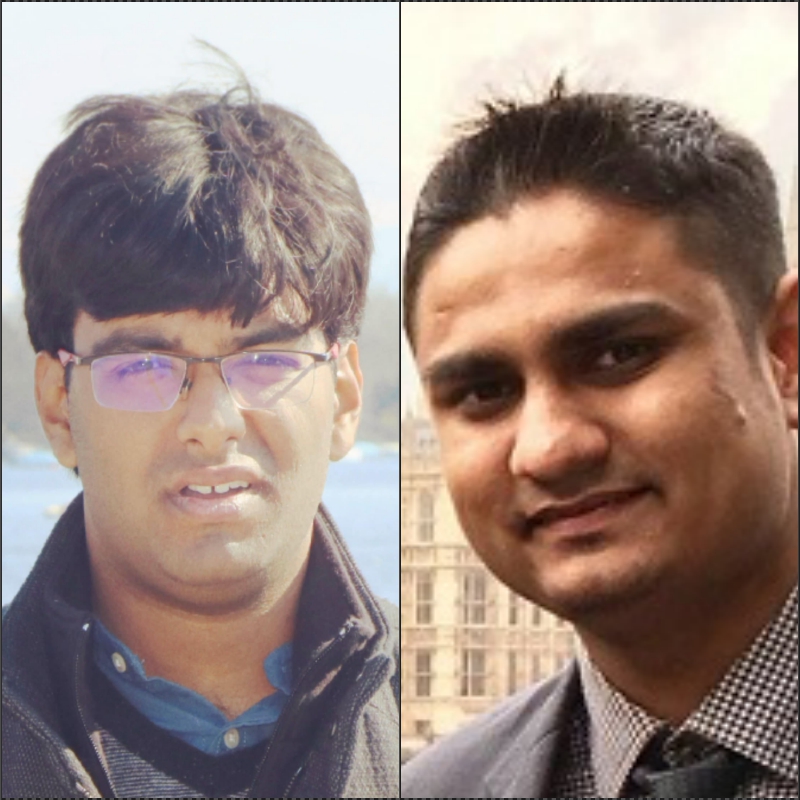 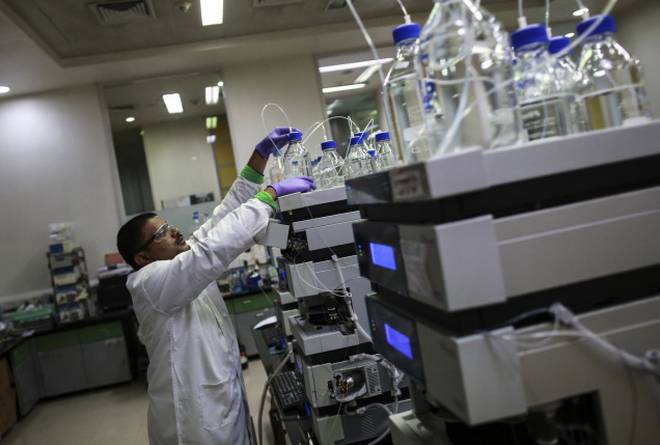 An employee works inside a laboratory at Piramal’s Research Centre in Mumbai August 11, 2014. Credit: Reuters/Danish Siddiqui/Files

Demonetisation, the goods and services tax (GST), a structural slowdown, or some other unknown factor – the jury is still out on what has caused the Q1 GDP numbers of 2017 to slide in India. While shocks do impact GDP trajectories in the short term, it is the continuous generation of ideas and R&D that will help fuel long-term GDP growth.

In this regard, a new working paper at the National Bureau of Economic Research (NBER) – a leading economic research organisation based in the US – shows a worrying trend: Sliding research productivity across all major industries in the US despite exponential increases in research effort. What does this mean? More and more research is being required to maintain the same level of economic growth.

India, on the other hand, has been recently on a path of rising total factor productivity growth (TFP). This makes it extremely important for India to step up its R&D spending and improve its R&D infrastructure in order to provide a sustainable path to a long-run economic growth trajectory.

In a letter addressed to Isaac Mcpherson dated August 13, 1813, that eventually became famous in the world of digerati, Thomas Jefferson, founding father and the third president of the US, wrote:

“That ideas should freely spread from one to another over the globe, for the moral and mutual instruction of man, and improvement of his condition, seems to have been peculiarly and benevolently designed by nature, when she made them, like fire, expansible over all space, without lessening their density at any point.”

For economists, Jefferson perhaps characterises the most important feature that an idea possesses: its non-rivalrous nature. In public economics, a good is said to be non-rivalrous if one person’s usage of the good does not diminish simultaneous usage by other users. For example – consider the information contained in the blueprint of an iPhone. Once the display, processor type, recognition system along with a host of other specifications are finalised upon, that blueprint is replicated across all the Apple factories. Replication of the blueprint in an Apple factory in Shenzhen, China does not prevent its counterpart in Bengaluru, India from using it. The idea embodied in the blueprint is thus non-rivalrous.

The property of non-rivalrousness ensures increasing returns to scale for an economy’s production function. It is this non-rivalrousness nature that places ideas at the centre of the theory of economic growth. Amongst many other things, the invention in medicines, telecommunications, space science, digital space all represent ideas that have been, in part, responsible for economic growth over the last two centuries. Quantitatively, US per capita income today is nearly 17 times to that of 1870 levels. During 1870-2017, US GDP per capita has grown at a healthy average rate of nearly 2% per year. Moreover, this income growth has brought about an even higher transformation in living standards of people as reflected by the quality of life indicators vis-a-vis levels two centuries before.

The role of ideas in economic growth has long been a problem which economists have been intrigued with. It was in the 80’s and 90’s, however, that the literature on ideas and economic growth gained traction with a series of writings by Paul Romer, the current chief economist at the World Bank. In a series of papers, he argued on how public R&D spending and subsidies could positively influence the long-run rate of economic growth. Two results of his work are central to our understanding.

Firstly, the rate of economic growth is determined by the stock of human capital and knowledge the economy possesses. Secondly, public R&D is crucial to the development of ideas as private markets generate too little R&D in market equilibrium owing to their non-rivalrous nature. To sum it up, public provision of R&D is a crucial positive determinant of the rate of economic growth. To account for ideas and technological progress in growth models, economists are usually interested in the TFP.

TFP accounts for the growth in output not accounted for by the growth in inputs used for its production and is often synonymous with improvements in the technological state of an economy, and is an important concept in economic growth accounting.

The ‘scale effects’ of R&D spending

However, in his 1995 treatise ‘R&D Based Models of Economic Growth’, Charles I. Jones of Stanford University argued against the then prevailing theories predicting ‘scale effects’ of R&D spending. The ‘scale effects’ literature argues for a proportional relationship between the quantum of resources devoted to R&D and its effect on per capita output growth.

For example, if the number of engineers, researchers and scientists engaged in R&D is doubled, the per capita growth rate of output should also double. However, Jones’ empirical analysis showed how scientists engaged in the US R&D industry had increased from the 1950s to 1990s, but the TFP growth had remained largely constant and seemed to be uncorrelated. Not only in absolute numbers, even the share of labour engaged in R&D had tripled over the same time period despite a nearly constant TFP growth. 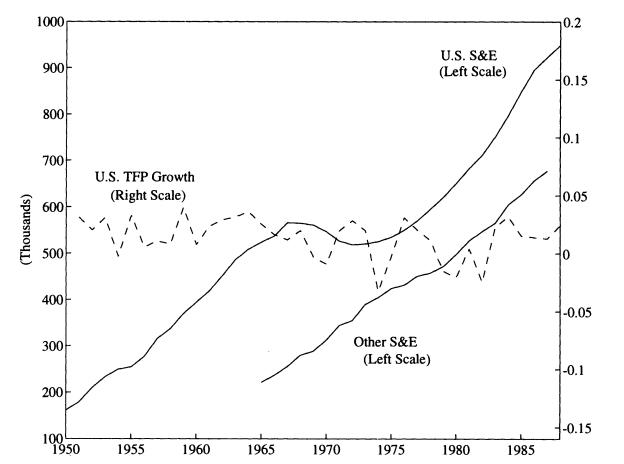 Building on Jones’s 1995 work, a new working paper at the NBER looks into the productivity of research effort, that is, how research effort correlates with an increase in output. ‘Are Ideas Getting Harder to Find‘, authored by Nicholas Bloom and Michael Webb of Stanford University, John Van Reenen of Massachusetts Institute of Technology and Jones himself, tries to empirically calculate research productivity in the US both at the micro (industry) level and the aggregate US economy as a whole.

Their findings are worrisome: While the research effort (proxied by the number of effective researchers) is rising at a healthy rate, research productivity is declining sharply both at an aggregate level and in different industries. Moreover, they find a secular rate of decline in research productivity across all the industries and products they investigate across the primary, manufacturing and the service sector. (Figures 2 and 3 below show this)

These findings indicate that the US and other major economies of the world today would need to sustain their economic growth levels with even higher levels of research effort. Now, these claims may dampen the spirits of even those who are most optimistic about growth prospects of these countries. But it is important to put some context into the authors’ findings. 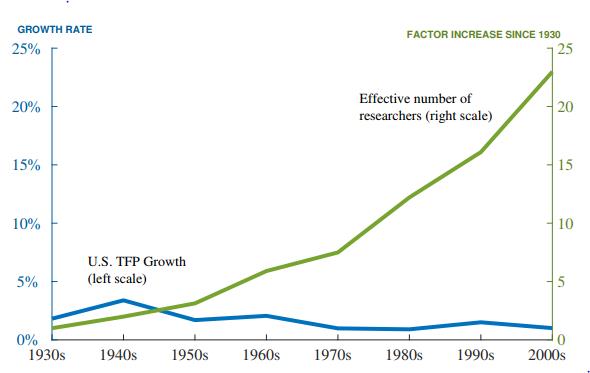 Figure 2. This shows aggregate data on growth and research effort.The idea output measure is Total Factor Productivity (TFP) growth. During the period 1930-2000, TFP growth has been relatively stable or even declining. The effective number of researchers has increased by a factor of more than 23. Source: Bloom, Jones et.al (2017). 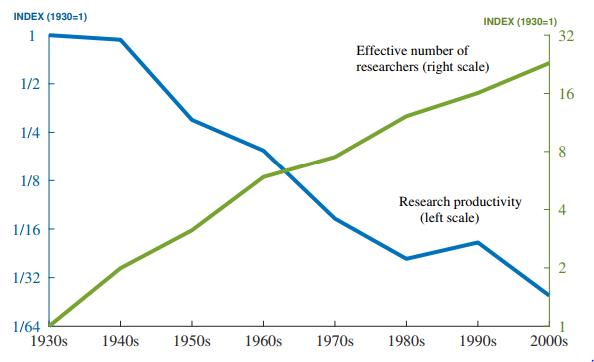 First, US real GDP was a little over $2 trillion in 1950, from which it has grown to over $17 trillion today. As a result, the same magnitude of economic growth today implies a much larger increase in income in absolute terms. Therefore, the fact that higher research effort is required to maintain the same level of economic growth can be explained by the large base the US economy possesses. In this sense, the paper just reaffirms our understanding that as an economy grows, an increasing amount of investments in R&D is needed to push the economy forward.

Second, what the authors measure here is not technically the difficulty of getting new ideas but rather the onerous task of developing them further as they mature. Third, the TFP measure is also a reflection of our measure of ignorance. This ignorance covers many components, some wanted (new technical innovations, higher R&D output), others unwanted (measurement errors, model misspecification). Therefore, to rely on TFP growth as a sole indicator of technological progress may very well be misleading.

Fourth, continuous innovations in technology, artificial intelligence, biotechnology etc may not have shown up on TFP yet but arguably have the potential to put an economy on an upward growth trajectory in the future. Present accounting standards for TFP may very well fall short in capturing the forward-looking dimension of R&D. Therefore, unqualified conclusions from this paper are certainly not recommended.

On the domestic front, India’s public spending on research has been stagnant at around 0.8% of GDP for over a decade. As a major growing economy, we have been happy to piggyback on the innovations of the advanced economies and use them in an Indian setting, despite some exceptions. However, if the authors’ findings are true, then the advanced economies are definitely facing a problem of declining returns to research.

As a result, it is important for India to seize the initiative and start investing in R&D, and develop a robust R&D infrastructure if it wishes to maintain a sustainable and a high economic growth path. While the jury is still out on whether it was demonetisation or the introduction of GST that reflected in the dismal Q1 growth percentage of 5.7 %, it is important that we should not stray away from investing in R&D that will ultimately lead us to a higher long-run growth trajectory. The Modi government’s flagship schemes such as Impacting Research Innovation and Technology and Uchhatar Avishkar Yojana are pivotal to India’s R&D growth story.

The non-takeoff of the Vishwajeet scheme is certainly a setback to the research centres and universities that were seeking financial resources for research. 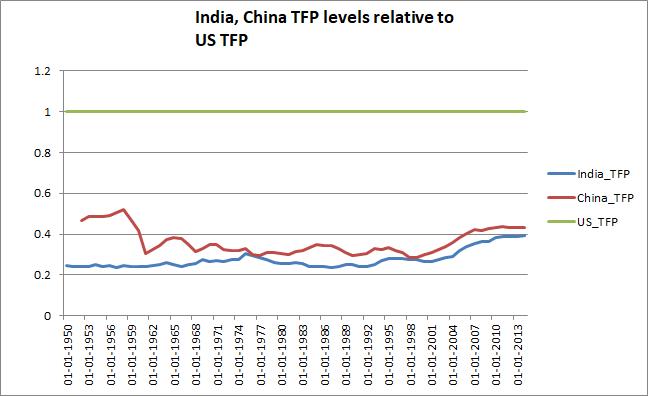 Figure 4: Total factor productivity levels of India, China relative to the United States. Note that these are levels, not growth rates. India’s TFP levels are below those of China and nearly two-fifth to that of U.S. Source: Authors calculations and Penn World Table 9.0 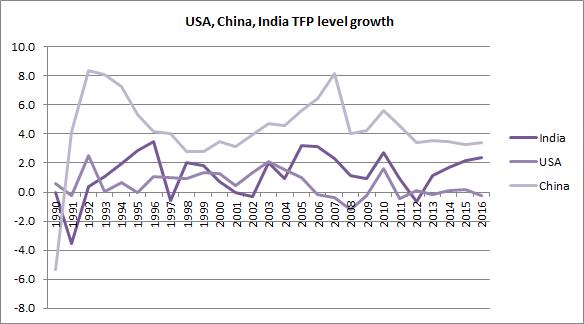 Figure 5: Total factor productivity growth of India, China and United States. It is encouraging to note that India has been on a rising TFP path and therefore, R&D merits even more serious attention. Source: Authors’ calculations and The Conference Board

The present NDA government certainly needs to commit more budgetary increases to the R&D sector if we want our researchers and scientists to be doing more high-end research. Moreover, this spending must crowd-in private investments from the industry. These increases are pivotal to increasing India’s TFP level – though Indian TFP growth has been having an upward trajectory in the last few years, it continues to be only a fraction of the US TFP levels. (Figures 4 and 5 illuminate this above.)

While the nation celebrates the 86th birthday of one of its greatest citizens, A.P.J Abdul Kalam on October 15, it becomes important to recollect what he had to say for the policymakers, “When grand plans for scientific and defence technologies are made, do the people in power think about the sacrifices the people in the laboratories and fields have to make?”

It is essential that India respects these words more generously.

Sujan Bandyopadhyay currently works for CAFRAL, Reserve Bank of India. Aniruddha Ghosh is a  graduate student who has recently completed his MSc. Econometrics and Mathematical Economics from London School of Economics.