The court ruled that it would examine if all the matters in the case should be heard by the Supreme Court itself. 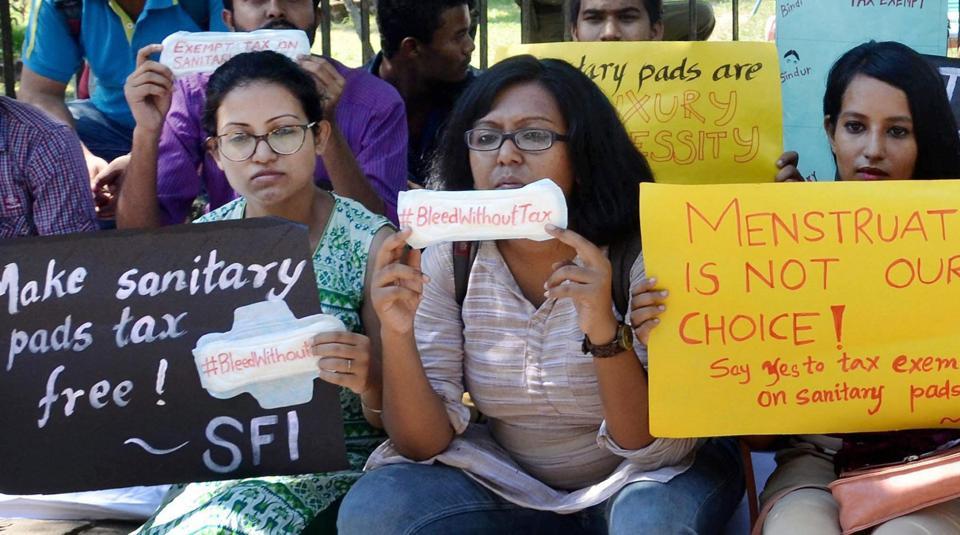 Activists of Students Federation of India hold placards during a protest demanding the withdrawal of 12% GST on sanitary napkins. Credit: PTI

New Delhi: The Supreme Court on Monday, January 22, stayed the proceedings pending before the Delhi and Bombay high courts challenging the levying of 12% Goods and Services Tax (GST) on sanitary napkins. According to Scroll, the apex court said it would examine if all the matters should be heard by the Supreme Court itself. All petitioners have been issued notices for the same.

The transfer petition filed by the Centre was being heard by a three-judge bench comprising Chief Justice of India Dipak Misra and Justices A.M. Khanwilkar and Justice D.Y. Chandrachud. The Centre had sought a stay on proceedings on pleas challenging imposing GST on sanitary napkins.

The Delhi high court had in mid-November had asked the Centre why sanitary napkin – a necessity rather than a luxury – should not be exempt from GST when items like bindi, sindoor and kajal did not fall within its ambit. A bench of Acting Chief Justice Gita Mittal and Justice C. Hari Shankar had said sanitary napkins are a necessity and there cannot be any explanation for taxing them and exempting other items by clubbing them in the category of necessity.

The court had also condemned the government over the absence of any women in the 31-member GST Council.

The petition before the Delhi court had been filed by Zarmina Israr Khan, a PhD scholar in African Studies at Jawaharlal Nehru University. Khan’s plea had termed the government’s move – which has attracted severe criticism from activists – as illegal and unconstitutional.

According to LiveLaw, Khan’s petition states that poor menstrual hygiene is behind nearly 70% of all reproductive diseases in the court. Costly sanitary napkins would, therefore, deter more women from observing menstrual hygiene, hence impacting their health.

Central government had on its part maintained that if sanitary napkins were not taxed, then its cost would go up. In its court affidavit, the Centre stated that: “Reducing the GST rate on sanitary napkins to nil, will result in complete denial of input tax credit to domestic manufacturers of sanitary napkins, while zero rating imports. This will make domestically manufactured sanitary napkins at a huge disadvantage vis-a-vis imports, which will be zero rated.”

The affidavit further held that since raw materials for manufacturing the product attract GST of 18% or 12%, even 12% taxation on sanitary napkins is an inversion in the GST rate structure.

The petition before the Bombay high court has been filed by the Mumbai-based NGO Shetty Women Welfare Foundation. On January 16, the court had asked the state government to consider making sanitary napkins available at subsidised rates, Scroll reported. The court had further questioned the Maharashtra government on the steps taken by it to spread awareness about the use of the product.

When GST was implemented on July 1, 2017, sanitary napkins were put under the 12% slab even while products like sindoor and bangles were declared tax-free. Just days later, the finance ministry issued a statement saying that the tax on the product in question was less under the new tax regime than before GST was introduced. According to the ministry, before GST was rolled out, sanitary napkins were taxed 13.68% due to concessional excise duty and VAT levied on them.

Earlier in January, a group of students from Gwalior had started a campaign by writing messages on sanitary napkins and sending them to the prime minister, urging him to eliminate the designated 12% GST on the product.