Russia-Ukraine: With Both Oil and Rupee on Fire, What Are Modi Govt's Policy Options?

India will have to brace itself for a prolonged disruption in the energy markets and volatility in currency, which will have a serious impact on economic growth, livelihood and employment. 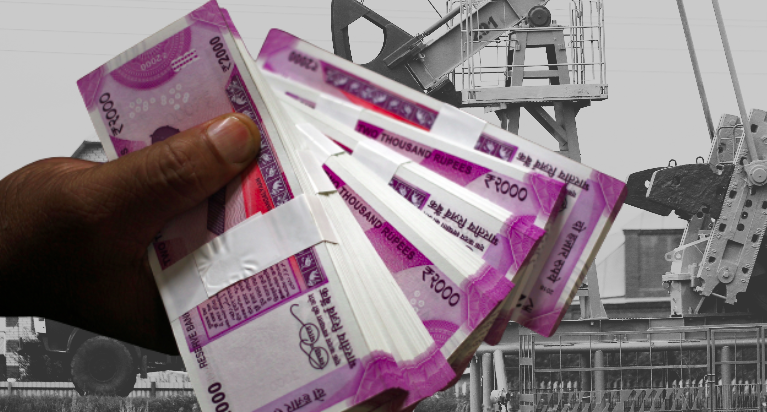 Rs 2,000 notes. In the background, a fuel tanker truck drives past a pump jack at an oil field Sergeyevskoye owned by Bashneft company north from Ufa, Bashkortostan, Russia. Photos: Reuters

Note: A shorter version of this piece was first published on The India Cable – a premium newsletter from The Wire & Galileo Ideas – and has been republished here. To subscribe to The India Cable, click here.

One criticism of the Narendra Modi government is that it hardly has time to govern between state elections. Half a dozen Cabinet members were camping in Varanasi over the past few days even as global crude crossed $120 per barrel and the rupee weakened to Rs 77 to a dollar against the backdrop of the Ukraine war.

The rupee might have weakened even more if RBI had not sold dollars from its reserves to stem a steeper fall. Until a few days ago, the central bank had already sold a couple of billion dollars to support the rupee. Analysts forecast the rupee might touch Rs 80 to a dollar in the near term.

The currency movement is directly linked to the state of the global oil markets and crude prices.

It is also important to remember that a 10%-15% currency depreciation will fuel further inflation across the board as all imported items will become that much costlier. India’s vulnerability is higher because its forex reserves, though comfortable at $630 billion, is not dominated by export earnings as in the case of China or South Korea.

The dollar reserves are constituted mainly by liabilities such as foreign debt and equity portfolio money. So, we don’t own these dollar reserves but owe them to global investors. This weakness particularly gets amplified in times such as these.

The Economic Survey estimates that every $10 increase in global crude price lowers GDP by 0.3 percentage point and increases the current account deficit (CAD) by $10 billion. 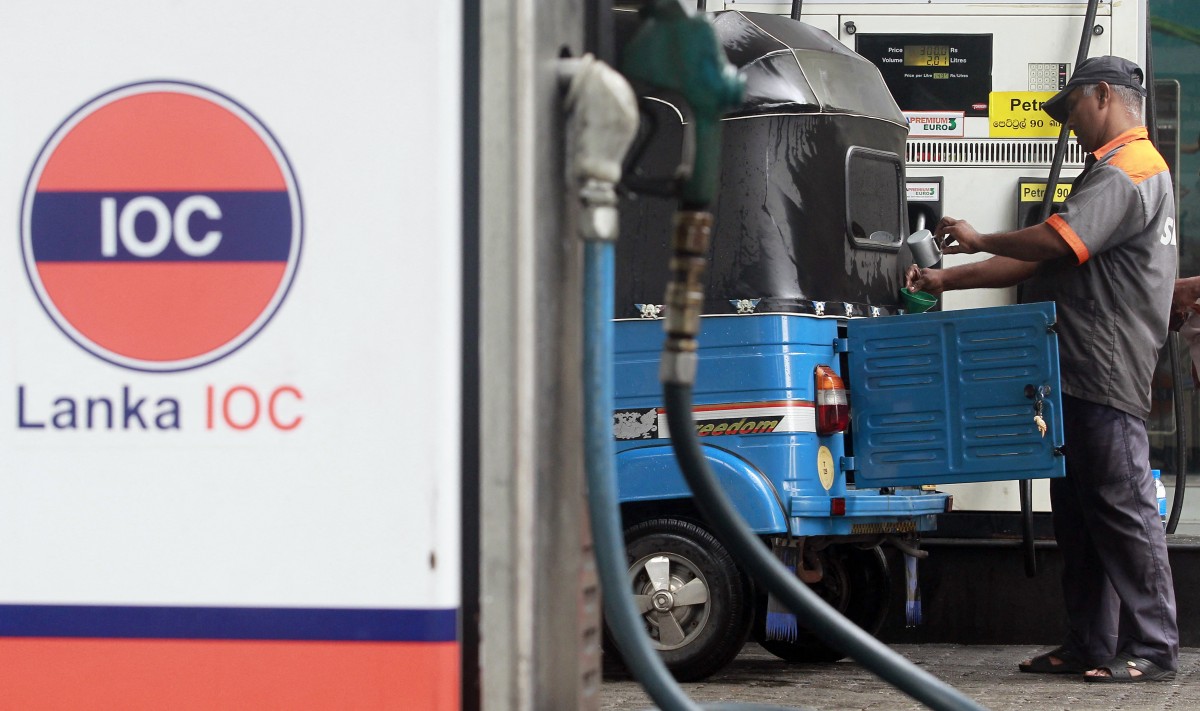 FILE PHOTO: A worker fills the tank of a motorised vehicle, known locally as a “three-wheeler”, at a Lanka India Oil fuel station in Colombo April 25, 2012. Photo: Reuters/Dinuka Liyanawatte

So if crude remains at present elevated levels then GDP could slowdown considerably and CAD could also expand further by nearly 2% of GDP. This will put even more pressure on the rupee, cause upward pressure on interest rates and create a vicious cycle where foreign investment might also slow down until the exchange rate stabilises. No statement has come from the finance minister on how macro economic management will become far more challenging as most of the budget assumptions will have to be reviewed. The Economic Survey and the budget had assumed global crude at $70-75 for fiscal 2022-23.

The Centre had last aligned domestic fuel price to global crude at $75 per barrel on November 4 and held it there for  over 3 months because of UP elections. Now a cumulative upward adjustment of 60% will be needed to diesel/petrol prices to fully reflect the market price. Theoretically if the entire price increase since 4 November is to be passed on to the consumer as per the market linked policy of aligning domestic fuel price to global crude, then the price of petrol and diesel should be well above Rs 150 per litre!

It will be political suicide to increase prices by that magnitude in one go.

If prices are not increased the losses will be borne by oil marketing companies like IOC, HPCL, BPCL etc. Like in the past the government may resort to giving oil bonds to these companies to make up for the shortfall. But that is tantamount to simply postponing the problem, not solving it.

So what are the government’s options? It will probably increase the price in small doses and hope for some early diplomatic breakthrough in the Ukraine conflict. 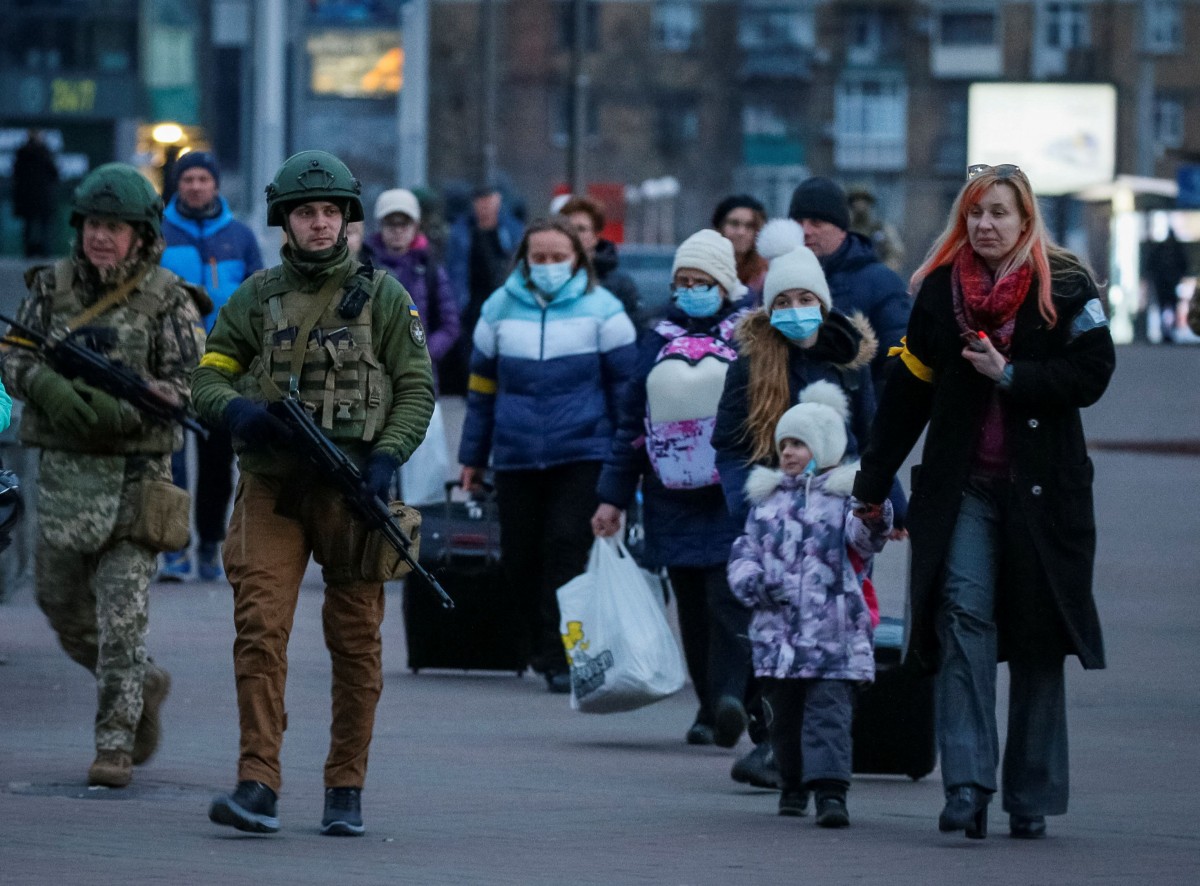 Even if there is some partial diplomatic breakthrough in the form of a temporary ceasefire, it is unlikely that all the economic sanctions on Russia will be removed anytime soon.

India will have to brace itself for a prolonged disruption in the energy markets and volatility in currency which will have a serious impact on economic growth, livelihood and employment.

Emerging market economies are more vulnerable in the current crises because global money tends to rush to the safety of US treasury, thus strengthening the dollar further and reducing US bond yields. This is ironical says Chief Economic Advisor of SBI Group, Soumya Kanti Ghosh in Indian Express (March 9, 2022). It is ironical because US runs by far the largest current account deficit in the world – 23 times that of India – yet it is the emerging economies like India which get punished via a currency depreciation and hardening of interest rates, Soumya Kanti says.

Well, this is the outcome of what one may call a natural global financial hegemony that dominant economies enjoy. In every economic crises global money finds a safe haven in the US treasury bonds. This won’t change until other big market economies create critical size and confidence in their currencies.

In the current crisis, India will have to fortify itself within the current structure of global finance which is dominated by the US. There is really no point lamenting that the US runs the largest current account deficit and yet enjoys an appreciating currency in the current crises.

The way things are going in Ukraine, India could end up with a likely inflation rate of 7-8% and real GDP growth of about 4%. In this circumstance, the government must preserve its resources and build its food security first and foremost. India must also ramp up its coal and gas production, to minimise its energy security risk coming from outside. Besides, it must prioritise its infrastructure pipeline projects in a way that maximum inputs are sourced locally and there is minimum dependance in imports. It is important to prioritise imports given the currency volatility. These steps will somewhat is insulate India from the global economic headwinds.