Global macroeconomic signals don’t bode well either, leaving little room for optimism in the near future.

Mumbai: When it rains, it pours. And it is pouring for the Indian rupee, which hit a fresh record low of Rs 77.59 against the US dollar this week.

Global macroeconomic signals don’t bode well either, leaving little room for optimism in the near future. In the US, retail inflation for the month of April pencilled in at 8.3%, signalling that the US Federal Reserve will not hold back from pushing ahead on an even more aggressive rate hike. Meanwhile, rising US treasury bond yields – reaching as high as 3% – have triggered an exodus of foreign funds, which explains why portfolios of Indian retail investors are splashed in red.

In this week alone, the equity bourses have collapsed by around 4%. Look at the last 30 days, and the collapse is 10% with no immediate relief in sight. It is not all hunky-dory either for the Indian 10-year benchmark bond, which on Monday was trading at Rs 93.69 for a yield of 7.46% after it touched a record yield of 7.49%. The situation is bad enough that the Indian government had to step in and implore the RBI to undertake a bond purchase programme, if only to moderate the rising bond yields.

Also read: Raging Inflation: Why Your Chicken Curry Is the Most Expensive it Has Been in 5 Years

Amidst this seemingly all-pervading economic rout, the debate over plummeting rupee levels has now started spilling into the mainstream political conversation and Indian Twitter seems to be abuzz with Prime Minister Narendra Modi’s earlier criticism of the UPA government. In numerous videos, the then chief minister of Gujarat can be seen taking the UPA government to task for its failure in preventing the fall of the Indian currency from the Rs 64 a dollar level. Reality seems to have come full circle, with the very criticisms voiced by him now being levelled against him.

The question is, for how long can the Modi government continue putting up a brave face if this economic pain persists?

What is the relevance of the exchange rate?

So, for instance, assume that a product costs $10. For an Indian customer, the total cost for importing the goods when the Indian currency is trending at Rs 72 against the dollar will be Rs 720. Contrast this with the current situation, when the rupee is at the level of 77.59 and it will cost the Indian customer Rs 775.9 or Rs 776.

Alternatively, an Indian exporter would have received Rs 720 for a product priced at $10 when the Indian currency was at Rs 72. Right now, the exporter receives Rs 775.9 or 760.

Every time the Indian government or companies or firms or other organisations import goods, they need to buy US dollars and sell Indian rupees. The greater our imports, the greater is the demand for the US dollar, which consequently ratchets up the price of the dollar against the rupee. Alternatively, the higher our exports, the higher the demand for the Indian rupee which helps it appreciate in value against the US dollar.

As per an S&P Global Ratings April report, it could widen to as much as 5% of the GDP if the global crude oil prices touch $150 a barrel. This is not such a far-fetched scenario, considering the explosive spurt of crude oil and energy prices that has been witnessed in the aftermath of the Russia-Ukraine war. Hamstrung supply chains, a dreaded recurrence of another COVID-19 wave and the monetary tightening by the US are all collectively contributing to an inflationary cycle in foodgrains and energy commodities.

How low can the rupee sink?

In a research note released this month, ICRA sees the Indian rupee trading in the range of 75-79 per US dollar in the first half of FY23.

“A rise in the CAD, along with monetary policy tightening across the globe, dollar strength and a general risk aversion towards EM assets is expected to impart a depreciating bias to the INR. However, large forex reserves, narrowing inflation differentials and the likely stemming of FII debt outflows would prevent a further sharp depreciation from the recent record-low. We expect the INR to trade between 75.0-79.0/US$ in H1FY2023.”

The silver linings and dark clouds in the rupee’s future 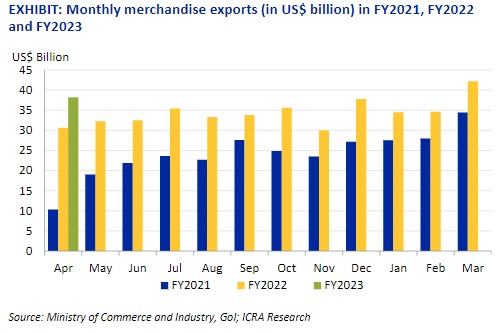 Also read: All is Not Well With India’s Gig Economy

However, the overhang of the oil imports still has more than enough muscle to nullify India’s export jump. By the end of March this year, imported crude oil and petroleum volumes rose by close to 11%. In value terms, by April 2022, oil imports had reached an all-time high of $ 19.5 billions. 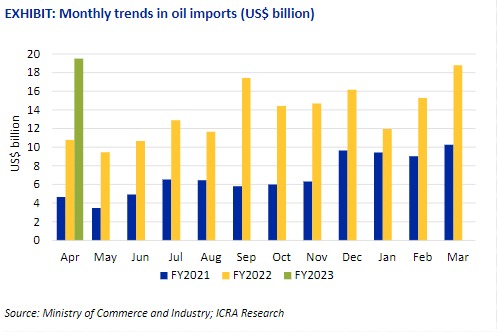 Going by an assumption of average crude oil prices at $101/bbl in FY23, ICRA predicts that the oil imports bill could reach as threateningly high as $225-230 billion, which will be a 42% increase over the FY22 bill.