An RBI survey found that 40.7% of people in metropolitan areas think the economic situation has worsened, up from 25.3% in the same period last year. 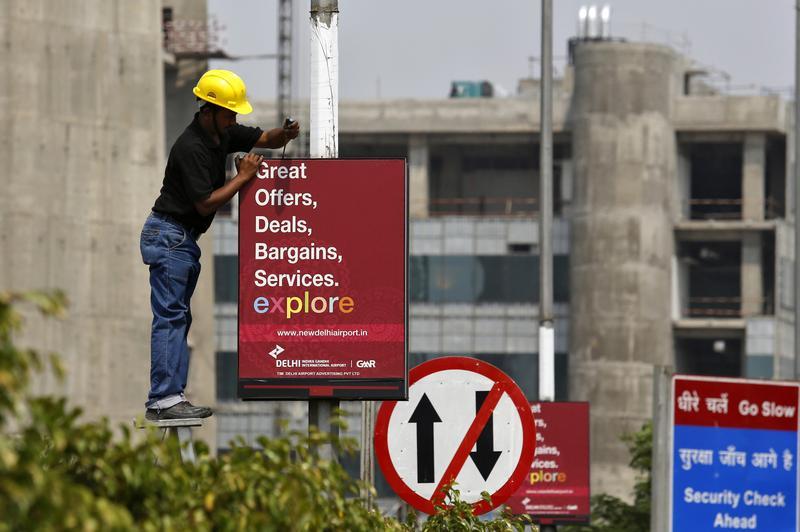 A worker removes a GMR Infrastructure board near to the airport in New Delhi, May 13, 2013. Credit: Reuters/Anindito Mukherjee

New Delhi: A series of recent Reserve Bank of India (RBI) surveys has shown that more and more people now think that the general economic situation in the country is taking a turn for the worse.

On October 4, the central bank released results of the Consumer Confidence Survey for September 2017. “The Current Situation Index (CSI) — a sub-index of the RBI’s consumer confidence survey that measures overall consumer sentiments toward the present economic situation — slipped further into the pessimistic zone, reflecting deterioration in sentiments on the employment scenario, the price level and income,” the RBI said.

According to its results, the consumer confidence index (based on people’s current perception of the economy) is at its lowest since December 2013. The results of the survey showed that 40.7% of those interviewed thought the general economic situation has worsened. In the September 2016 survey, this number was at 25.3%. In this year’s survey, 34.6% though that the economic situation had “improved”, down from 44.6% in September 2016. In addition, 50.8% of people said they expect the situation to improve next year – as opposed to 57.7% in September 2016 and 66.3% in December 2016. The survey was based in six metropolitan cities – Bengaluru, Chennai, Hyderabad, Kolkata, Mumbai and New Delhi – and had a sample size of 5,100.

The lack of job opportunities is one of the main concerns for people, the survey found. As many as 43.7% think the employment situation in the country is worsening – up from 31.9% in September 2016. While 49.9% think the situation will get better in the next year, 26.1% think it will get worse and 24% think it’ll stay the same. Several recent reports have detailed how companies and organisations across sectors have cut jobs since 2016, though aggregate figures for the economy are not available.

A very high percentage – 85% – perceive spending on essential items as having increased, while only 26.6% see incomes as having gone up (and 26.6% think they’ve gone down). Fifty-four percent also said spending on non-essentials has gone up. “Respondents’ pessimism on the price level has also become accentuated in the recent period; however their outlook on inflation softened in the last two rounds,” the RBI says with its results.

The same set of parameters caused the Future Expectations Index (FEI) – a sub-index that measures overall consumer sentiments toward the short-term (six-month) future economic situation – to slip further in the September 2017 round relative to its reading in the June 2017 round, the RBI said.

Other recent RBI surveys have also highlighted how things aren’t looking so good on the economic front. “The RBI’s Survey of Professional Forecasters on Macroeconomic Indicators, said that forecasters have moderated their growth expectation for 2017-18 and 2018-19 in view of tempered assessment of private consumption demand and industrial growth,” Indian Express reported. However, people still expect growth consolidation with a higher saving and investment rate in 2018-19.

Another survey, the Industrial Outlook Survey of the Manufacturing Sector for Q2 of 2017-18, found that overall, business sentiment in the manufacturing sector has worsened, the RBI has said. “The outlook on cost of raw materials and cost of finance for Q3 of 2017-18 improved but manufacturing sector may continue to lose pricing power resulting into low profit margin,” Indian Express quoted the report saying.