'Can't Even Pay Our Staff': Rajasthan Sees 69% Drop in Tourist Arrivals This Year

Foreign tourist arrivals also dropped by 59.54% this year, compared to 2019, leaving a profound impact on the hospitality industry which is grappling with weak demand.

Jaipur: There is hardly any industry or individual that has escaped the disruption caused by the ongoing public health emergency.

But the tourism industry has been the biggest casualty primarily because, despite the lifting of the COVID-19-induced lockdown, connectivity hasn’t been fully restored. Travel is still restricted to urgent matters resulting in a sharp decline in tourist footfall across the country.

Rajasthan is one of the most popular tourist places in India owing to its vibrant landscape and royal heritage as seen in its historic forts and palaces, centuries-old temples and Thar desert.

However, the tourist influx since March in the desert state has been considerably low. The data on tourist arrivals from the Rajasthan tourism department, shared with The Wire, shows that in 2020, the state has seen a fall of 69.3% in Indian tourist arrivals. Last year, 3,96,85,822 Indian tourists had visited various places in Rajasthan while this year, the number stood at 1,21,75,524.

Similarly, this year, the foreign tourist arrivals also dropped by 59.54%, as compared to 2019. Last year, 10,92,724 foreigners had visited the state while only 4,42,011 foreigners could arrive this year, that too before the national lockdown was imposed in March.

The significant low inflow of tourists has left a deep impact on the hospitality industry which is grappling with very little demand.

Owner of K.K. resorts in Rajasthan’s Jaisalmer, Kailash Vyas said that the opening of resorts and hotels after the lockdown was lifted proved to be an even bigger loss for them due to very low footfall.

Also read: Rajasthan Government on a Privatisation Spree in Tourism, Says Its Role Is Only That of a Facilitator

“We opened up the property post the lockdown but couldn’t generate money to even pay off our staff. For instance, out of the 52 rooms in my resort, only 2 rooms were occupied in the months of July and September,” Vyas told The Wire.

Due to connectivity issues, potential tourists from Delhi, Mumbai and West Bengal are also not able to reach Rajasthan.

“Since September, only tourists from surrounding areas are arriving; mostly from places that take just a day to drive down like Gujarat,” said Kundan Bhati, the owner of Surya Vilas hotel in Jaisalmer.

Even, the state tourism department is promoting tourism only from nearby areas. “The ‘Short Stay, Safe Stay’ concept is meant to ensure that travel enthusiasts from nearby states can come to rejuvenate in a safe and secure ambience,” Alok Gupta, Principal Secretary, Department of Tourism, Government of Rajasthan told the Financial Express Online.

As the tourists now prefer to travel in their private vehicles, local taxi drivers are also facing difficulties in earning a living.

Most of the tourists used to arrive either via trains or flights. In both cases, they needed local taxis to move around in the city.

Particularly in Jaisalmer, the two most attractive tourist spots  – Sam sand dune and Tanot mata temple  – are situated about 120 kilometres away from the city which can be reached either by private vehicles or local taxis.

“There is no Ola or Uber facility in Jaisalmer due to which tourists are dependent on local taxis from pick-up at the airport to sightseeing,” said Bhanu Singh, a taxi owner in Jaisalmer.

In the dearth of demand for taxis, many drivers who worked under any contractor have lost their jobs. “In the absence of work, there is no revenue. The contractors are not able to pay the monthly instalment of their cars which is why they are laying off the drivers,” added Singh. 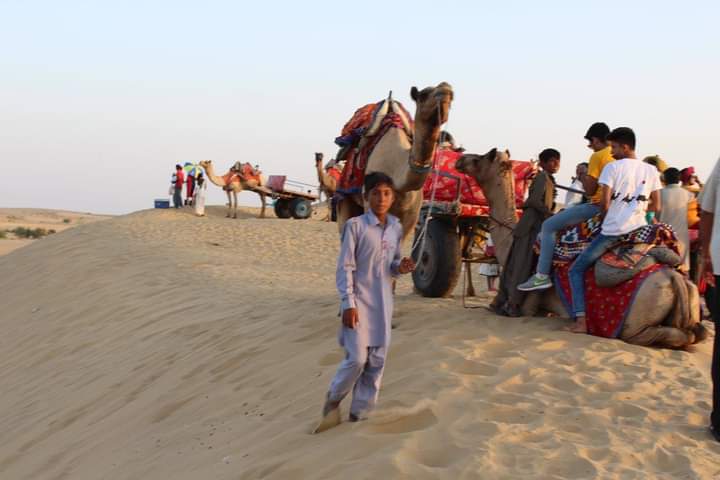 A young camel driver at Sam sand dune in Jaisalmer before the outbreak of the novel coronavirus. Photo: Special arrangement

Camel riding assumes a significant place at most of the tourist spots across Rajasthan. However, due to low tourist arrivals, camel drivers are unable to take care of their pet camels.

Forty-year-old Khuda Baksh, a camel driver at Sam sand dune in Jaisalmer, owns 50 camels. He has been working in this field for over 25 years but never saw crisis of such an extent. 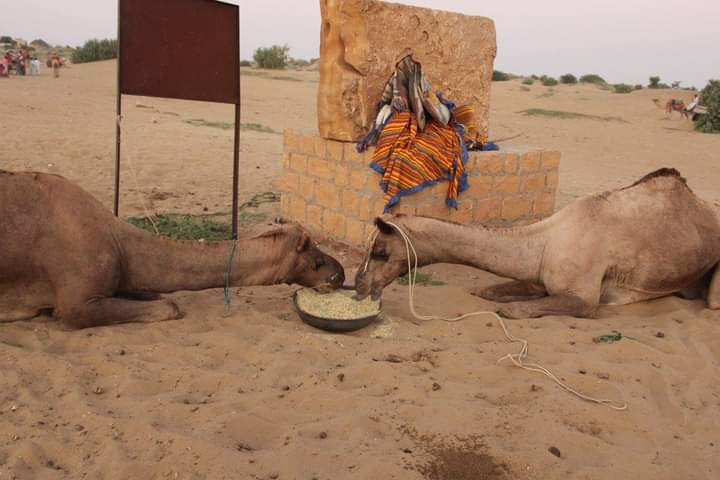 A pair of camels at Jaisalmer before the outbreak of the coronavirus in India. Photo: Special Arrangement

“The condition has never been so bad. I’ve spent my entire savings to provide food to camels for all these months [after March] but now I’ve run out of money. If the tourists are not going to turn up, I might have to sell off my camels,” Baksh told The Wire.

This pandemic has a far-reaching impact on local folk musicians like Manganiyars in Rajasthan who were totally dependent on tourists and other upper caste households for monetary and nutritional support. 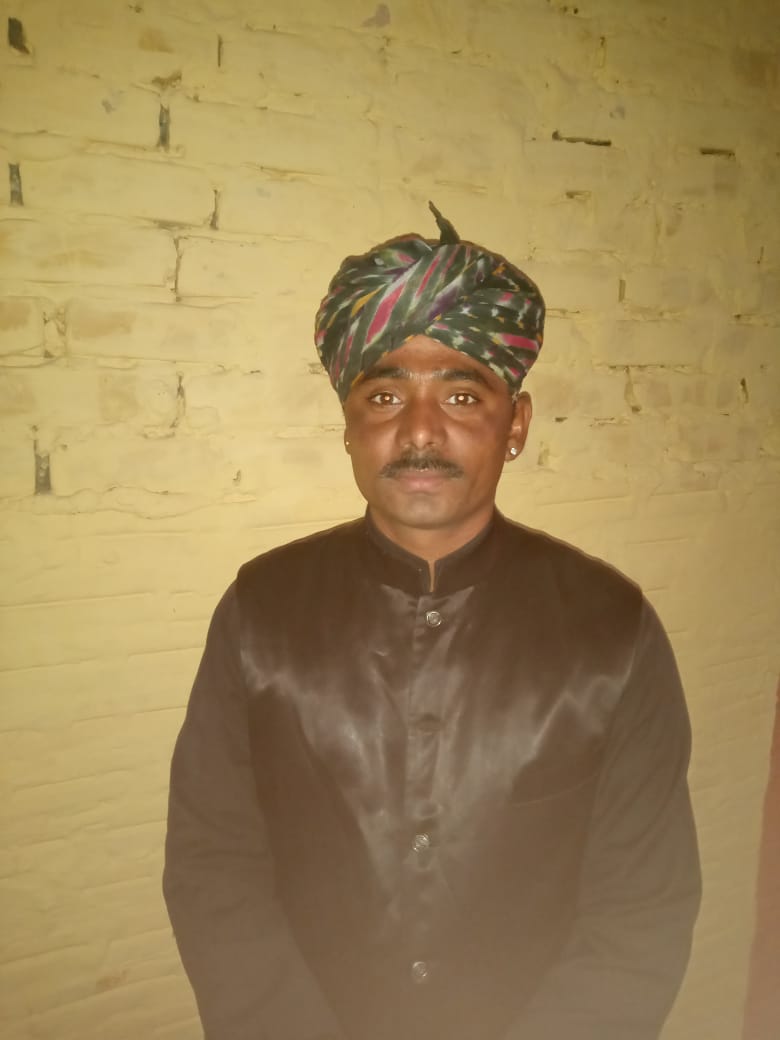 Bismillah Khan, a Manganiyar from Jaisalmer who used to perform at luxury hotels in the city is left out of work due to low turn out of tourists. Photo: Special arrangement

The Manganiyars are a small Muslim community of hereditary professional singers who perform at nearly every local occasion including marriage ceremonies. To keep Rajasthani art and culture alive, wealthy landlords and upper-caste Hindu families (Jajmaan) have supported the Manganiyars for generations. Every Manganiyar is associated with a family in the village who gives them food and some money.

To welcome guests, hotels and resorts organise performances by Manganiyars involving folk music and Kalbelia dance. They are given a monthly stipend ranging between Rs 20,000 and 40,000. However, due to low turnout of tourists this year, many of them have lost this source of income.

Bismillah Khan, a Manganiyar in Kanoi village of Rajasthan’s Jaisalmer says he is now paid only in accordance with the number of performances. Before the pandemic hit the country, he earned about Rs 40,000 per month for performing in hotels.

“For sustaining ourselves, we either perform at marriages or hotels. But now, neither are families open to inviting us for any occasion nor do hotels have guests before whom we could perform,” Khan told The Wire.

He added that many of the Manganiyars are facing extreme difficulties in managing two meals a day.

Vyas who also heads the Sam camp resort welfare society, an association that raises voice for those working in the tourism sector, said that the government has not extended any relief to the daily-wage workers dependent on this industry.

“Despite our repeated demands to extend loan facility to drivers, guides and folk artists, without much hassles, the government has never paid attention,” said Vyas and added that during such dire times, a loan could help them start afresh.