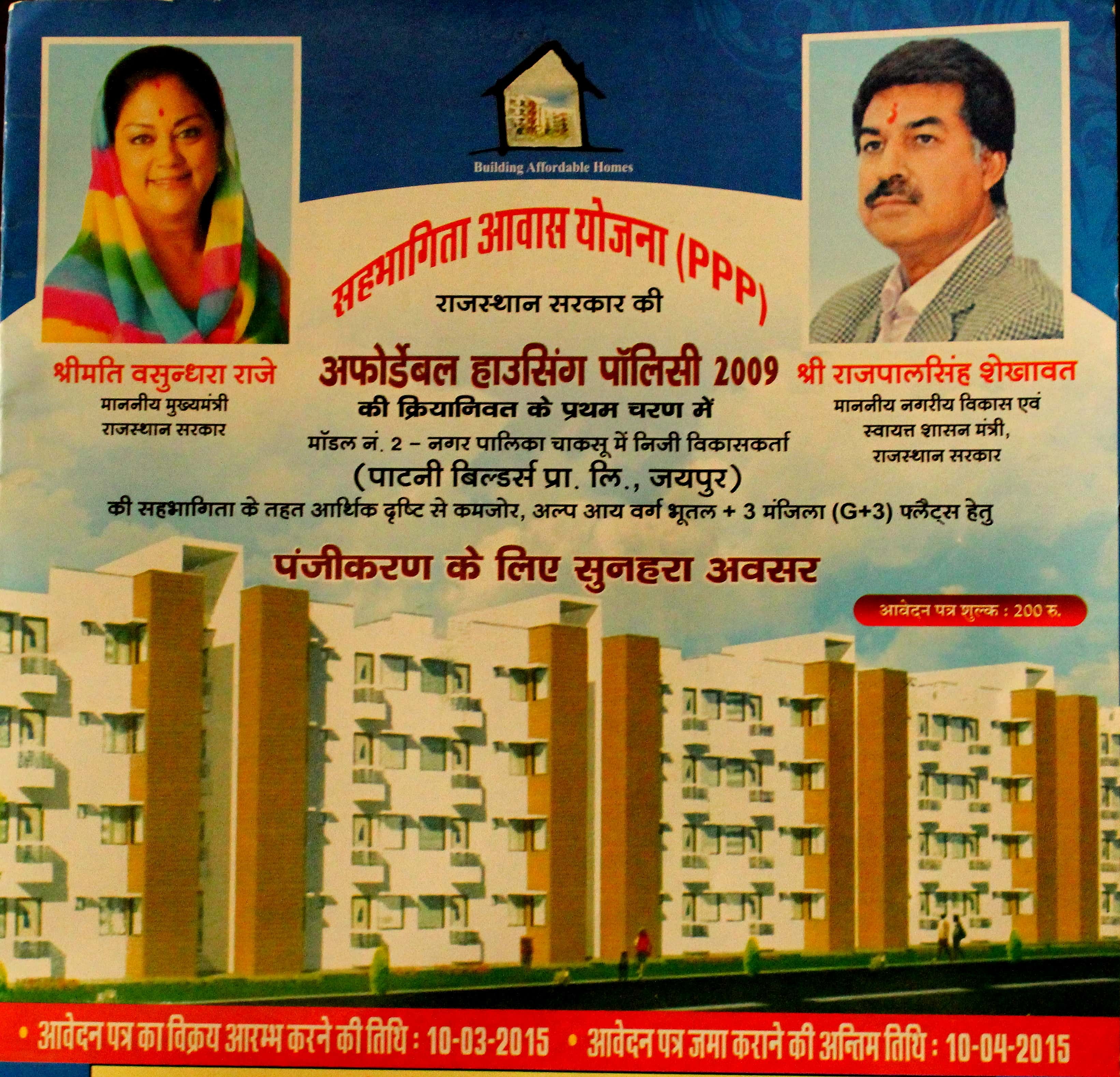 Jaipur: “How can one stay without electricity. Even after securing a flat in the lottery, I can’t shift there. I’m forced to pay double now. On one hand, I’m paying the rent for the house I’m living in and on the other, EMIs of the loan I took for paying the price of the house. I can’t even withdraw [from] the house now,” Deepender (42), a beneficiary under Sahbhagita Awas Yojana in Chaksu municipality of Jaipur district told The Wire.

“For the last two years, the authorities are redirecting me to different departments who shift the blame on each other. Everyone says that the file is under submission and electricity will be provided shortly but it seems to be a never ending excuse,” he added.

Deepender is one among the 14,888 beneficiaries of the Rajasthan government’s 2009 affordable housing policy. With a view to reducing the housing shortage, especially among the economically weaker section (EWS) and lower income group categories, the state government planned the construction of 1.25 lakh affordable houses in Rajasthan’s urban areas. 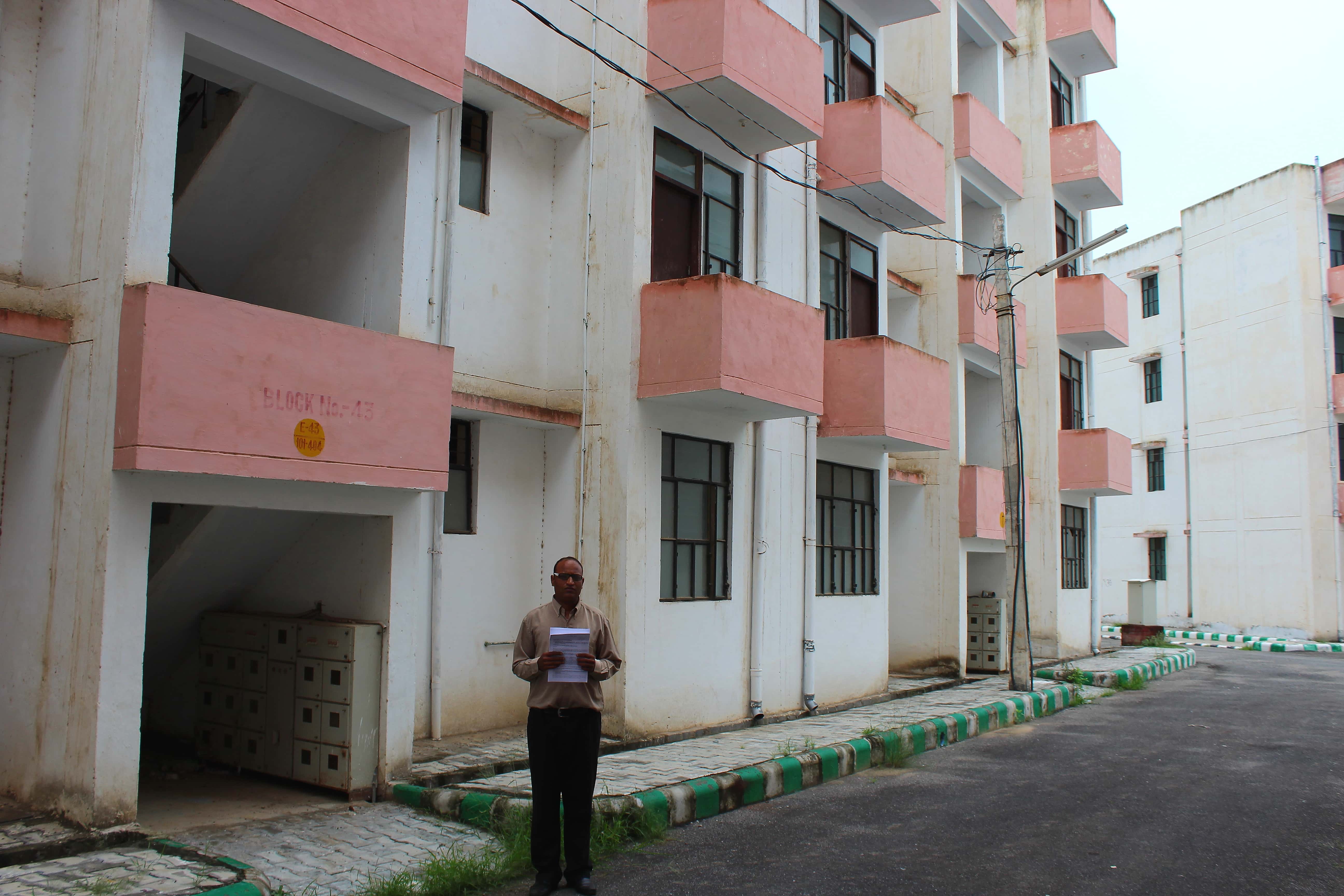 Deepender with his lease document outside his affordable house under Sahbhagita Awas Yojana in Chaksu. Credit: Shruti Jain

Fifty thousand houses were to be constructed by Rajasthan Housing Board and the remaining 75,000 houses through public-private-partnership as well as by Jaipur and Jodhpur Development Authority/urban improvement trusts/municipalities.

While the houses are built and allotted to the public, a majority of them are still vacant due to the lack of basic amenities – called ‘external development’ – which includes electricity supply, roads, water supply, sewerage, drainage system and any other work which may have to be executed in the periphery of, or outside, a colony for its benefit. Providing these basic amenities was the sole responsibility of urban local bodies – without charging any money from the buyers under the 2009 scheme – in Vasundhara Raje’s Chief Minister Jan Awas Yojana (2015) scheme, the burden of external development has been shifted to the beneficiaries who will now have to pay Rs 50 per square feet as external development charges.

The 2009 affordable housing policy, however, says, “external development charges shall be borne by urban local bodies to be recovered from the balance subsidy available from government of India and proposed basic services for urban poor fund (BSUP). In case the cost of external infrastructure is excessive the developer may be required to share the same.”

The amount received under the BSUP (shelter fund) by all urban local authorities is kept in a separate account in the respective organisation and utilised by the urban local bodies (ULBs)/housing board for the development of external development/maintenance works.

A close look at ground realities shows how this hasn’t worked.

Curious case of Chaksu and Kalwar

Consider the scenario in the municipal corporation of Chaksu. The corporation is liable to pay Jaipur Vidyut Vitran Nigam Ltd. Rs 1.5 crore for external electrification of the affordable houses built in the area but has not made the payment for the last four years. Due to this, 1,880 beneficiaries have not been able to shift to their allotted houses built by Patni Builders Pvt. Ltd. in Chaksu.

“There is no issue at all. We have taken approval from the chief minister. Electricity will be supplied shortly,” J. S. Nagpal, general manager (affordable housing) at Rajasthan Urban Drinking Water Sewerage and Infrastructure Corporation Limited (RUDSICO) told The Wire. 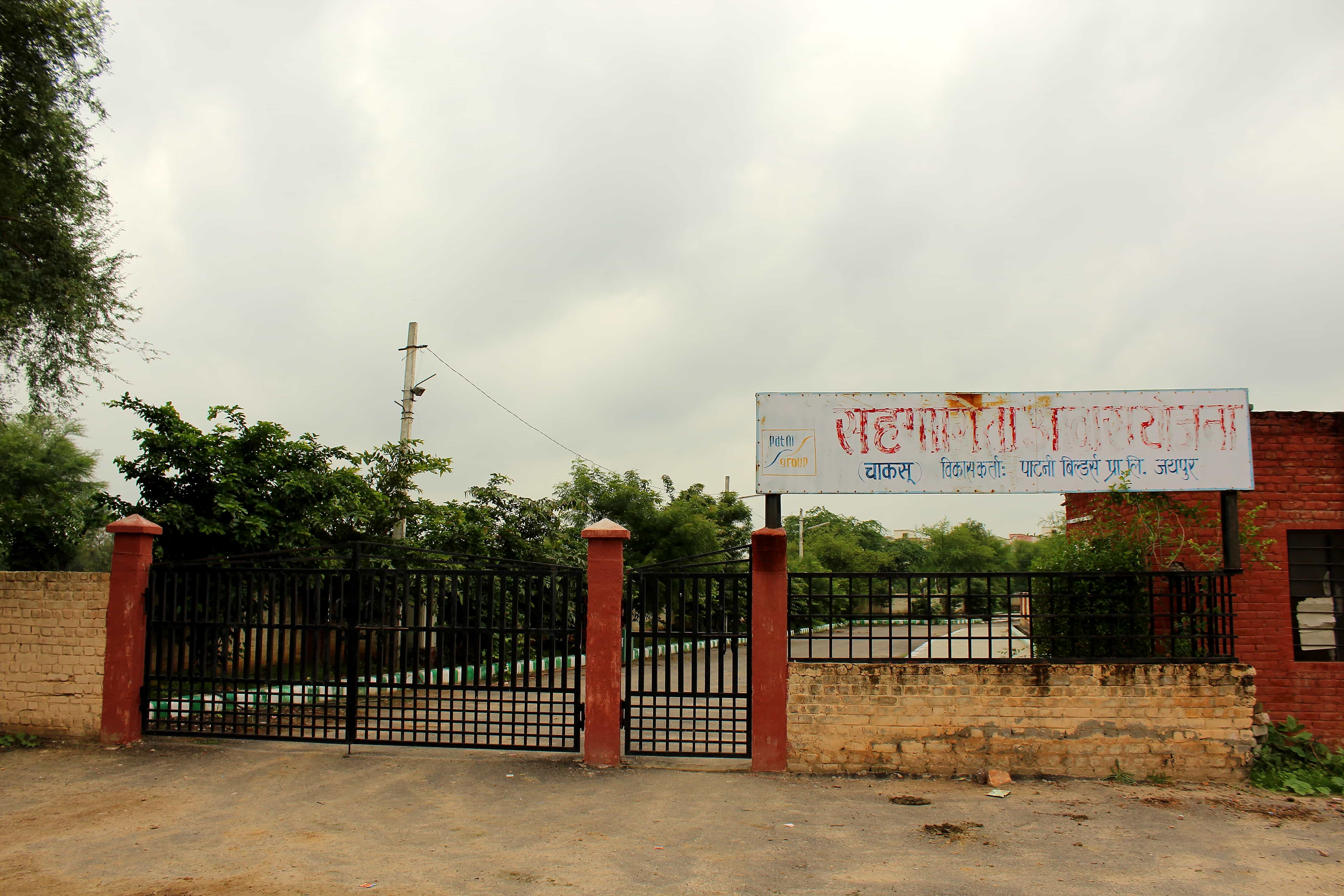 In Kalwar village, affordable houses built by Bhairav Township Pvt. Ltd. are also vacant due to the lack of electricity supply. “It’s been two years now since I’m working here. Nobody lives here as there is no electricity. An old couple used to live here after taking a private electricity connection for a bulb at the cost of Rs 500/- per month but after the death of the old man, the flats are again vacant,” caretaker of the affordable houses in Ramla ka Vass locality of Kalwar village told The Wire.

“We need approval from directorate of local bodies to pay Rs 1.5 crore from our budget. The approval was given in June this year on the condition to carry out a revision of the electricity cost estimate by a learned engineer but we don’t have this facility,” Mathur told The Wire.

The builders also blame the municipal corporation. “We have already paid Rs 53 lakhs to corporation for external development of the affordable houses build by us in Chaksu. The corporation is responsible for the delay in electric supply, not us,” said Suresh, a representative of Patni Builders Pvt. Ltd. 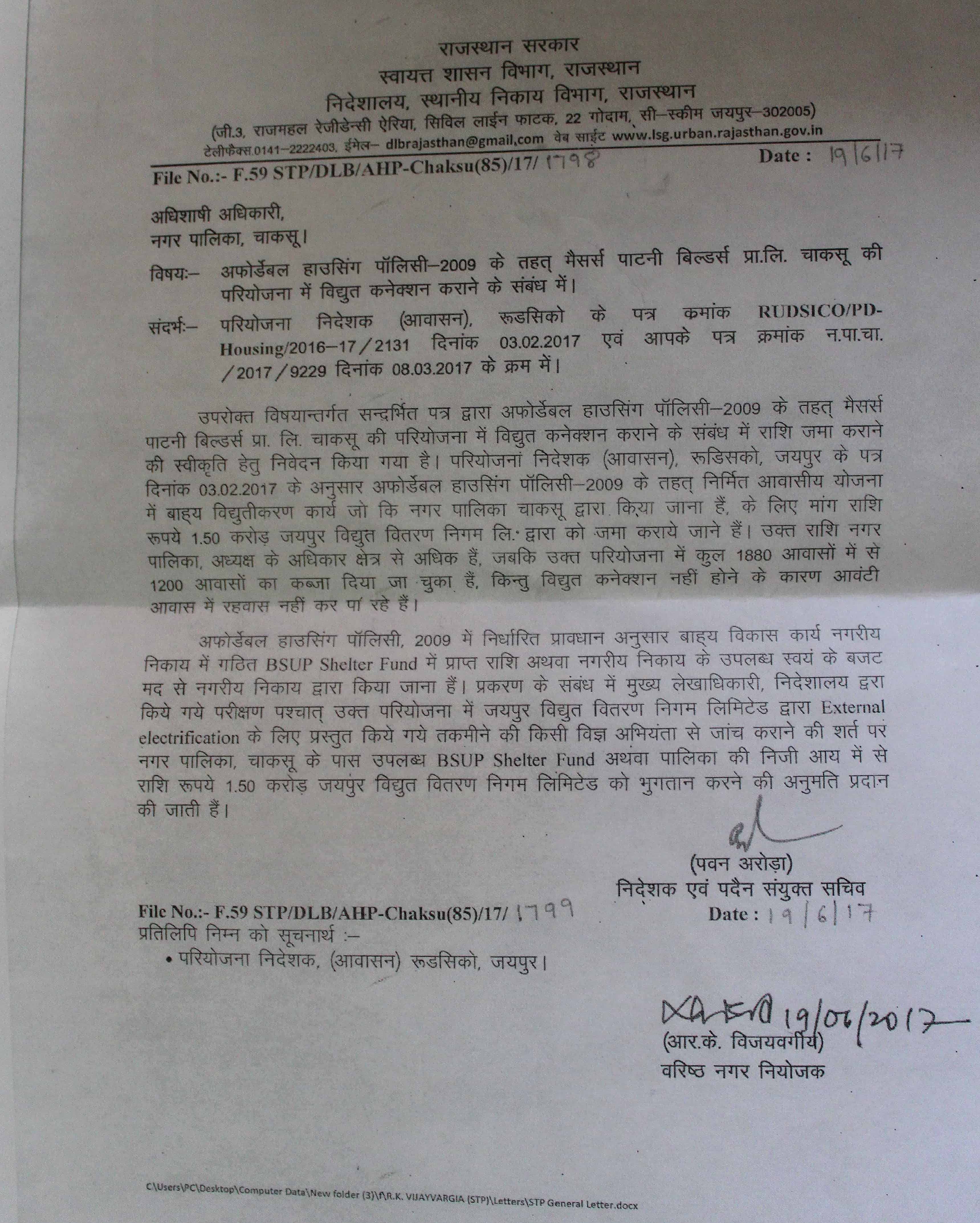 A letter requesting approval of Rs 1.5 crore from DLB for external electrification of affordable homes in Chaksu.

Besides bureaucratic delays, officials at the urban development and housing department also have their concerns.

“There is an issue in the ground sub station. The corporation has just given the estimated length not a specific route map. Also the underground electrical line recommended by them is more expensive. Why will we pay more? They need to revise the amount,” an official at the urban development and housing department said on the condition of anonymity.

“Most beneficiaries don’t care whether there is electricity or not because they already own a house. They have taken flats here either to have an extra house or to rent it out at a higher price. Authorities are also not bothered to supply electricity because there is no pressure from the public on them, but for genuine beneficiaries like us, payment of EMI as well as rent is very difficult in our budget,” said Naresh Maheshwari (38), another beneficiary under the Sahbhagita Awas Yojana in Chaksu.

Maheshwari’s wife, Nikita (35), agrees. “The builder asked to take private connection for electricity if it is urgent for us to shift in the affordable houses but we refused. Why should we pay again when electricity charges were already included in the price of the house,” she says.

The Rajasthan government’s housing department’s official stance is that all is well.

Speaking to The Wire, R. K. Vijayvargia, senior town planner at the Rajasthan government’s urban development and housing department said, “External development is the responsibility of the ULBs who are supposed to make the payment to the concerned department from the BSUP fund but most of the time, local bodies are not willing to pay as they see it as a private project. So, the approval takes years. There is no shortage of money in the BSUP fund. A majority of the flats built under the Affordable Housing Policy 2009 have the issue of electricity and water supply due to which they are unoccupied.”

At places where external development is completed though, The Wire found that beneficiaries complain about the quality of service.

“If there are five electricity points in the house, only two work. Water is supplied once in three days and the community dustbin is not emptied daily. We are forced to buy water and drink,” said Nand Kishore Jangid (45), who lives in the affordable houses built in Mohana Kachi basti under the Rajiv Awas Yojana (the scheme for affordable housing in partnership became part of this in 2013 to increase the affordable housing stock).

Under the Affordable Housing Policy 2009, the provision of external development was left to the ULBs who are not willing to pay for basic amenities even after the formation of BSUP (shelter fund). The difficulties in the providing basic amenities by the ULBs was seen as the shortcoming of the 2009 policy and it was changed in the Chief Minister Jan Awas Yojana 2015 scheme where EWS beneficiaries will have to pay for the external development themselves, relieving the local bodies and developers from the cost.

Meanwhile, affordable houses built under the 2009 scheme are falling to ruins due to the negligent attitude of the authorities who are playing a game of political hot potato.