Raghuram Rajan Has Got it Wrong on Inflation and Interest Rates 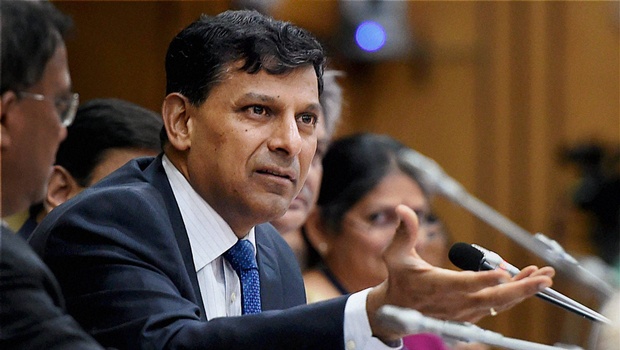 Raghuram Rajan has again refused to lower interest rates, insisting that cuts must wait till ‘fresh inflationary pressures’, being generated by the drought, abate. His decision has not come as a surprise because it was preceded, as every policy review in the past three years been preceded, by a drumroll of propaganda, orchestrated by Dalal street, to show how India’s economic difficulties have been of its own making, how these left Governor Rajan with no alternative but to take drastic measures to stabilise the economy, and how not extending his term now will send the wrong message to the ‘ global economic community‘ and sap confidence in the Modi government’s capacity to manage the economy .

Missing from this is any mention of economic growth and employment generation. Rajan has often said in the past two years, that India’s real rates of inflation – i.e nominal interest rate minus the rate of inflation — is not really high, and that growth will automatically revive when inflation has been tamed. But inflation, measured by its most comprehensive yardstick, the GDP deflator, has been virtually zero for the last two years, and the economy has shown absolutely no sign of reviving. On the contrary every single physical indicator – abandoned projects, accelerating bankruptcy in the corporate sector, a log-jammed financial system, and a near-zero growth in employment, shows that it is being locked ever tighter in the grip of stagnation.

Thus, before extending his term it is imperative to decide whether he has been the Indian economy’s saviour, or its destroyer. Rajan could have been be judged its saviour without a moment’s hesitation, if India’s inflation had been high, if the high inflation invariably slows down growth and employment generation (or makes it unsustainable), and if there had indeed been no other way of bringing it down except by raising interest rates. If even one of the answers is a negative it invalidates every premise upon which the RBI has determined interest rates in the past five years and makes the UPA, and BJP, governments guilty of having wantonly forsaken not only economic growth, but also denied poor families the chance of offsetting the inflation by securing more employment or higher money wages.

Do high inflation rates invariably impede growth, and has India’s inflation rate really been high enough to do so? The answer has been given, tellingly, by Kaushik Basu, Rajan’s predecessor as Chief Economic Adviser to the GOI, in a book published last year, “An Economist in the Real World”. Basu points out that while hyper-inflation has destroyed entire economies, not to mention growth, in several countries during the 20th century, its accepted definition is a price rise of 50 percent per month. India hardly comes into that league.

All the evidence collected from industrialising countries has shown that inflation rates of below ten percent a year have not only had no effect on growth, but have accompanied, high rates of economic growth. In South Korea, which has achieved an even more successful industrial transition than China, the inflation rate throughout its three decades of ‘breakout’ was always well above 10 percent , and went as high as 28 percent in the 1980s. It was not till 1997 that the Korean economy experienced a short–lived systemic failure, but that too was only through contagion from the financial crash in Thailand.

By world — but particularly developing country — standards India’s inflation has not been high. What India has actually suffered are two episodes of high inflation encased in two decades of moderate inflation. The first lasted for eight months between March and December 2008, and the second for a bare five months from December 2009 till April 2010. Before these episodes India had had very little inflation for a dozen years. After April 2010 too, wholesale price inflation fell gradually for the next three-and-a-half years and then collapsed suddenly into deflation at the end of 2014. Despite this Rajan has remained determined not to lower interest rates more than a grudging minimum. As a result Indian entrepreneurs now labour under some of the highest real interest rates in the world.

Were these inflationary ‘episodes’ caused by economic overheating, i.e an excess of demand ‘somewhere in the economy’, as Rajan has unswervingly asserted ? Did they remain episodes only because of the swift response of the RBI? In retrospect it is easy to see that neither bout of inflation was a product of excess domestic demand but of what economists have begun to call ’Salad bowl Stagflation’. This is the phenomenon, new to economics because it is a product of a globalised world market, of fiscal stimuli in one country failing to cure stagnation there but triggering inflation in other countries where the new purchasing power finally ends up.

The pump priming, on both occasions, was done by China whose investment spree went out of control in 2007-8, and even more spectacularly during its Fiscal Stimulus programme in 2009-11. This not only pushed up global crude oil, minerals and industrial raw materials prices all over the world but also global demand for foodgrains, sugar, fruit and dairy products. The latter was a siren song to which Indian exporters of everything from rice to onions and dairy products responded with alacrity, leaving the entire resulting burden of supply shortages to fall on the domestic population.

That was the global excess demand that three RBI governors in succession, beginning witth Mr Y.V Reddy in 2007, tried to fight by curbing domestic demand and investment. To quote a Nobel Laureate who shall remain unnamed, what the RBI did was ‘unforgiveable’.

Basu points out that fighting salad bowl stagflation requires completely counter-intuitive thinking. In 2009 and ’10, first Turkey and then Brazil learning from Turkey, chose to lower their policy interest rates in the face of rising inflation. Both brought prices down and in 2010 Turkey recorded the fastest growth in the world of 10.1 percent.

Turkey got it right

The reason why Turkey, in particular, got both growth and lower inflation is simple: Lowering interest rates encouraged production. This eased the domestic supply shortage and stabilised market prices. Elementary, my dear Watson. But three RBI governors and their entire kitchen cabinets did not get the point.

How did they, and a prime minister who won the Adam Smith economic prize at Cambridge university, get Indian inflation so wrong? Basu gives an oblique answer. “ People find inflation frightening because they cannot see where it comes from. (But) what they do not know, and would be even more alarmed if they did, is that the understanding of experts is also very incomplete. On many large subjects we (the experts) have little more than rules of thumb: if there is stagnation, lower interest rates and inject liquidity; if there is inflation raise policy rates and the cash reserve ratio of banks. These rules of thumb remain because they work most of the time. Those that do not get discarded over time. We build our inflation, and for that matter most of our policies, in the same way as birds build their nests”, i.e by trial and error.

There was nothing wrong in doing that so long as India was a largely closed economy in a world of nation-based economic systems. But that world has disappeared. Both for the old industrial powers and the new, the rules of thumb that had worked in the past no longer do so. This is because, today, virtually every sector of our economy is affected by policies and developments in other countries that we have absolutely no control over.

We never get tired of saying this, but only as an alibi for the failure of our policies. The truth is that, unlike the Central Banks of Turkey and Brazil, the RBI has not broken the mould of earlier policies and gone back to first principles in economics to frame a different response.

Nor, under Raghuram Rajan, is it ever likely to do so. For Rajan has never so far admitted that his policies are not working and that there might be a need to think afresh. Instead he has turned his battle with India’s dying industry into a personal one of proving them wrong and himself right.

This inability to think out of the box has cost India twelve irreplaceable years of industrial growth, millions upon millions of jobs for its youth and, for the reasons that Harvard economist Dani Rodriks has pointed out, all but destroyed its last chance to make the ‘industrial breakthrough’ that countries like China, Taiwan, South Korea and Malaysia made before the constraints imposed by a globalised economy   made “catch-up” industrialisation   close to impossible. India simply cannot afford to waste another two years with Rajan clinging to his policies because of his need to prove himself right. That is why he must be allowed to go.