While budgetary allocation has been hiked in the last two years, it's still not nearly enough for the government to meet its 2019 goal. 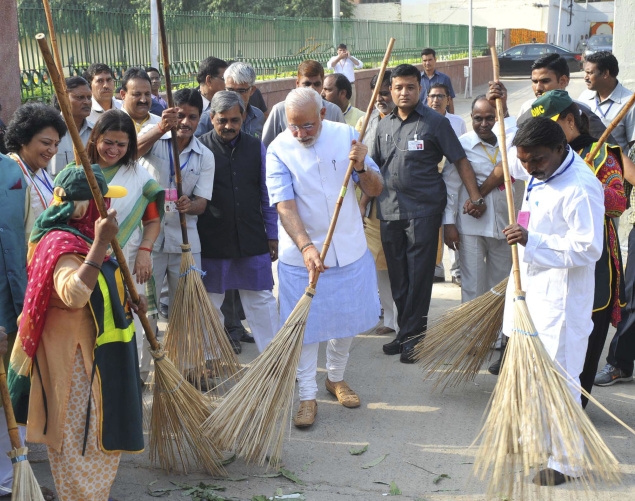 The Swachh Bharat programme was announced by Prime Minister Narendra Modi in his first independence day speech in August 2014, and launched on Mahatma Gandhi’s birth anniversary on October 2. Credit: Reuters

The Swachh Bharat Mission is one of the Indian government’s most well-known programmes. Announced by Prime Minister Narendra Modi in his first independence day speech in August 2014, and launched on Mahatma Gandhi’s birth anniversary on October 2, the mission aims to end open defecation in the country by Gandhi’s 150th birth anniversary in 2019. A dozen celebrities were roped in as brand ambassadors. All government letterheads have since carried the Swachh Bharat logo – also inspired by Gandhi’s round-frame spectacles – under the national emblem.

But when it comes to opening its purse strings, the government has not walked the talk. The mission’s biggest component, the Swachh Bharat Mission-Gramin or SBM-G, which has the crucial task of building ten crore toilets in India’s villages, has been severely underfunded since 2014, data from budget and information submitted by the government to a parliamentary committee show.

The latest Union Budget, despite its focus on rural development, carries this trend forward. The gap between money the SBM-G needs and what it actually gets has widened from Rs 3,500 crore in 2016-17 to a staggering Rs 15,000 crore in the coming financial year. As a result, not only is the 2019 goal harder to achieve, but other components of a healthy and hygienic India – including awareness-building on using toilets and providing safe drinking water – have taken a backseat.

SBM-G is a new avatar of past programmes to provide rural sanitation. The first full-fledged programme was the Total Sanitation Campaign (TSC) launched by the Atal Bihari Vajpayee government in 1999. To oversee the campaign, the government formed a department of drinking water supply under the Union ministry of rural development. In 2011, the UPA-II government established the ministry of drinking water and sanitation or MDWS. In 2012, TSC was renamed Nirmal Bharat Abhiyan or NBA. In 2014, it was brought under SBM-G and given its 2019 target.

Data from budget documents since 2012 show that although the UPA government did not provide enough funds to the sanitation programme, the situation has persisted even after the scheme was revamped in 2014. Although allocation to the programme has increased, it has been far short of what the MDWS has itself sought from the finance ministry.

In 2012-13 and 2013-14, the last two years of UPA-II, SBM-G (then called Nirmal Bharat Abhiyan) received just Rs 2,500 crore and Rs 2,200 crore, respectively, in revised estimates against a budget allocation of Rs 3,500 crore and Rs 4,260 crore. Budget allocations are announced in the Union Budget, while revised estimates are prepared six months later based on a reassessment of availability and need of funds.

Also read: Evaluating the Success of the Swachh Bharat Abhiyan

After the Narendra Modi government took over in 2014, its funding followed a similar approach. In 2014-15, it allocated the same amount – Rs 4,260 crore – that the UPA-II had in its final year, and then brought it down to Rs 2,850 crore in the revised estimates. In 2015-16, the government made a budget allocation of just Rs 2,625 crore, which was increased to Rs 6,525 crore in revised estimates.

In 2016-17, the government for the first time appeared to make a substantial allocation to SBM-G, allocating Rs 9,000 crore, which was revised upward to Rs 10,500 crore by the end of the year.

But these were nowhere close to what the government needed to build enough toilets, as MDWS’s submissions to the Parliamentary Standing Committee on Rural Development show. After each budget, department-related standing committees review the allocations made to different programmes against their actual requirements. The rural development committee’s budget review for 2016-17 shows that the Rs 9,000 crore allocated in the budget was far short of the MDWS’s own requirement of Rs 14,000 crore – a shortfall of Rs 5,000 crore. In fact, the report indicates that the MDWS had asked for Rs 8,000 crore in the first year of the Modi government itself (when they were allocated Rs 4,260 crore that was revised down to Rs 2,850 crore) implying that the scheme began with a shortfall of over Rs 5,000 crore. Similarly, in 2015-16, when SBM-G was given Rs 6,525 crore, the MDWS had actually asked for Rs 12,500 crore. 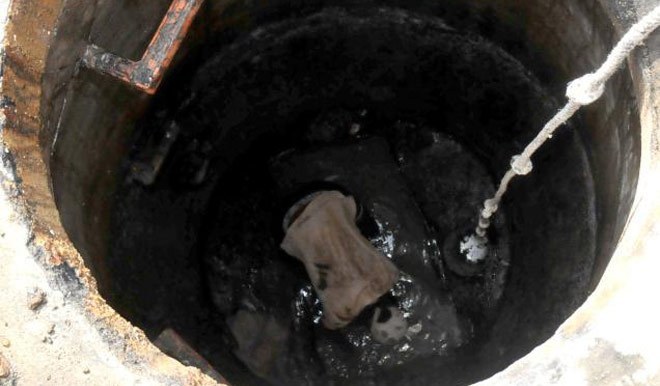 The Swachh Bharat mission aims to end open defecation in the country by Gandhi’s 150th birth anniversary in 2019. Credit: PTI

In the parliamentary committee’s report following the 2016 budget, there is a reference to the secretary of MDWS, Parameswaran Iyer, “pleading for requirement of higher funds” after that year’s budget fell short of his ministry’s demands by Rs 5,000 crore. “Reduction in [revised] amount was done by Ministry of Finance, due to various reasons which inter-alia included availability of funds and expenditures under the programmes,” the secretary told the committee. Iyer is a former officer of the Indian Administrative Service who took voluntary retirement in 2009 and joined the World Bank as a Programme Manager in water and sanitation. He was hired back by the government in early 2016 as secretary of MDWS. Phone calls to Iyer’s office and the office of Samir Kumar, economic adviser to the MDWS, and an e-mail sent to both on February 5 did not elicit a response.

In its report, the parliamentary committee noted that the gap between what the Swachh Bharat Mission required and received had “widened year after year.” “the committee have been clearly informed by MoDWS that only if required resources are made available to MoDWS, the objectives of Swachh Bharat by 2nd October, 2019 can be achieved,” its report said.

In its final recommendations, the committee said that funding to the programme should be “suitably enhanced in a big way.” Following this, in the 2017-18 budget, the government made an allocation of about Rs 14,000 crore to the scheme, a 33% increase from the revised estimates for the previous year.

But following earlier shortfalls, the ministry’s requirements had grown far higher. Indeed, the parliamentary committee’s report for the 2017-18 budget noted that Iyer “candidly admitted” that his ministry had actually demanded Rs 25,000 crore for the year, meaning his ministry faced a shortfall of a staggering Rs 11,000 crore.

To this, the committee made a “pointed query” if the budget provisions were enough to achieve the mission’s target of 100% sanitation coverage by 2019. The secretary admitted that “the present allocation is not sufficient to meet the requirements of the ministry with regard to the mission implementation.”

“The committee are apprehensive that attainment of the objectives of ODF (open defecation free) India would remain a distant dream until and unless sufficient funds are allocated to the ministry,” it said in its final recommendations.

Also read: Manual Scavenging in the Times of Swachh Bharat

Budget documents released following the recent budget announcement show that the finance ministry is far from taking the recommendations seriously. For 2017-18, against the shortfall of Rs 11,000 crore, the ministry in its revised allocations gave just Rs 3,000 crore more for the mission. And for 2018-19, the allocation to the mission has actually been lowered to Rs 15,343 crore – barely half of what the MDWS told the parliamentary committee it needs to achieve the 2019 goal.

Poor allocation of funds by its own finance ministry now threatens the success of the government’s flagship programme.

According to the SBM-G dashboard, of the 16 crore households identified, ten crore households were without toilets and needed to be covered by 2019. About half of these belonged to persons below the poverty line.

The scheme has so far helped build 6.7 crore individual household toilets, meaning that another 3.7 crore still remain to be built. The government aims to build 1.8 crore toilets in 2018-19.

Although states and Union territories are responsible for carrying out the actual implementation of Swachh Bharat, the central government through the MDWS is the key funding agency. It provides 60% of funds for building community sanitary complexes, solid waste management and administrative costs, and contributes Rs 7,200 out of the Rs 12,000 financial incentive given to individual households to build toilets.

But poor funding from the Centre has meant that states are running short of funds. “Even now states are already in negative balance in terms of the availability of finances and there seems to be this expectation that “targets” must be met, and money will follow,” said Avani Kapur, director of the Accountability Initiative at the Centre for Policy Research.

“We have heard from states where they are having to find money from other sources in the hope that sometime soon GoI will reimburse them. The other fear, which we have also seen is that the Rs 12,000 incentive basically just doesn’t reach the beneficiary – at least not within the same fiscal year,” Kapur said.

Also read: What Gandhi’s Spectacles in the ‘Swachh Bharat’ Logo Really Seem to Show Us

With falling funds and rising targets, the funding has increasingly tilted towards construction of toilets at the cost of other budget areas under the mission. The ‘information, education and communication’ or IEC sub-head, which funds awareness activities to encourage people to use toilets, is one such category. SBM-G guidelines recommend that 8% of total funds be earmarked for IEC. While this has never been fulfilled, the highest achieved proportion was 4% in 2014-15. IEC was allocated Rs 418 crore in the 2017-18 budget, but this was brought down to Rs 318 crore in revised estimates. In 2018-19, the budgeted allocation has further reduced to Rs 300 crore, which is just 1.9% of the total scheme budget. Given the targets, states often begin funding IEC activities after toilet construction is complete, but this approach – to focus on access first and then usage – can have implications on the sustainability of usage, Kapur said.

No money for water

Even the money given to SBM-G appears to have come at the cost of the national rural drinking water programme or NRDWP,  the only other programme managed by the MDWS. NRDWP aims to provide at least 90% rural households with a piped drinking water connection by 2022. Clubbing drinking water and sanitation is a part of the ‘WASH’ concept – Water, Sanitation and Hygiene – a multi-pronged strategy to tackle a gamut of issues arising out of lack of hygeine, such as water-borne diseases and stunting among children, and is one of the Sustainable Development Goals.

But with a greater emphasis on Swachh Bharat under the Modi regime, funding for NRDWP was substantially reduced, implying that the drinking water programme was made to ‘pay’ for Swachh Bharat.

The result is best reflected in the words of the MDWS secretary Iyer, who told the parliamentary committee in 2016: “Since 2012-2013, we were getting Rs 10,500 crore [for NRDWP] at that time; and this year, we have got only Rs. 5,000 crore. So, the question was this. How are we going to achieve coverage [of habitations without piped water] with half the money? It is a very basic question, which we are also asking ourselves.”

“Due to a fall in NRDWP funds, there are cases where habitations that were covered by water supply have slipped to being partially covered,” said Trisha Agarwala, senior research consultant at the Centre for Budget and Governance Accountability. In a 2016 report, the non-profit had highlighted that “the diversion of focus” from water towards sanitation came at the cost of “cutting down allocations in rural water or ‘adjusting’ funds from one scheme to the other.”

The government often justifies the fall in NRDWP funds to the implementation of the Fourteenth Finance Commission’s recommendations, which gave a greater share of central funds to states and brought down the Centre’s share in such schemes from 75% to 60%. But the experience is that financially weaker states such as Jharkhand end up using the funds in other activities and neglect water supply, Agarwala said. “When the Centre cuts funding in a scheme like this, the weaker states are affected the most,” she said.

Nihar Gokhale is a freelance journalist and tweets at @nihargokhale.