Following the latest daily price hike, petrol was selling at a three-year high price of Rs 71.27 and diesel at a record Rs 61.88 a litre in Delhi. 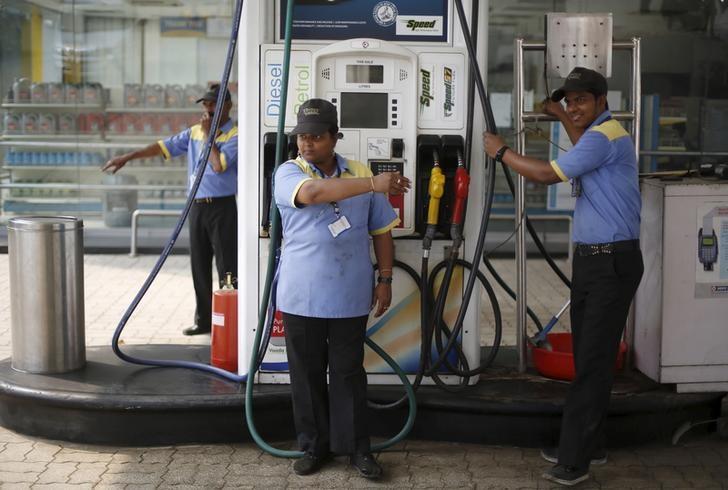 New Delhi: Retail prices of auto fuels are on fire as oil marketing companies (OMCs) pass on the increase in global oil prices to consumers. On Tuesday, OMCs hiked petrol and diesel price by nine paise and 14-16 paise a litre respectively in metros, under the daily price revision mechanism.

Following the latest daily price hike, petrol was selling at a three-year high price of Rs 71.27 and diesel at a record Rs 61.88 a litre in Delhi.

The hefty hike in auto fuel prices was necessitated by the rise in international oil prices. Brent crude hit $70.37 a barrel on Monday, the highest since the global oil market saw its dramatic meltdown begin in the middle of 2014, consolidating its gains made after non-shale oil producers pledged on November 30 to continue output cuts till the end of 2018. The Indian crude basket price has risen from $52.49 in April to $62 a barrel in December, an increase of over 18%.

The output restraint by producers, coupled with healthy oil demand, has pushed up crude price by nearly 15% since early December. “This rally has been driven first by robust fundamentals, with strong demand growth and high Opec compliance accelerating,” US bank Goldman Sachs said in a note on Tuesday.

Other US banks, including Bank of America Merrill Lynch and Morgan Stanley, have already upped their price forecasts.

“We have updated our supply/demand balances to reflect a faster-than-expected tightening in the global oil market due to improving cyclical conditions, cold winter weather, and higher than expected Opec compliance,” Bank of America Merrill Lynch said, as per a Reuters report.

Morgan Stanley said “oil markets were 0.5 million bpd undersupplied in 2017”, adding that 2018 would still see a 200,000 bpd deficit. It expected Brent to rise to around $75 per barrel by the third quarter of this year. The current trend in the global oil market could force government’s hands on further tax cuts. The Rs 2 a litre excise duty cuts announced by the government in October for petrol and diesel have failed to provide cushion to consumers against the surging global crude market.

India meets more than 80% of its crude oil requirement through imports. The Narendra Modi government has reaped large revenues from oil taxes even though the global crude market started its descent in June 2014. If the trend continues, it could throw a wrench in policymakers’ calculations on current account deficit (CAD) and fiscal deficit. Trade deficit, a key component of CAD, has risen in recent months due to rise in oil prices. The government’s fisc is already under pressure due to the shortfalls in GST collections in October and November.