Parliament Debate: The Opposition and Finance Minister Are Comparing Apples and Oranges

Claiming universal and broad-based revival of the economy based purely on the performance of the organised sector is highly misleading. In a debate on the economy in Parliament this week, opposition parties kept their focus on back-breaking inflation, rising unemployment and shrinking real incomes, even as finance minister Nirmala Sitharaman maintained that GDP growth was coming back and cited the Goods and Services Tax (GST) revenue growth of 28% to buttress her case. Sitharaman also cited the rising purchase manager’s index for manufacturing to assert the economy was not going into recession under any circumstances.

Clearly, the opposition and finance minister were seeing the economy through different lenses. It is a fact that India is seeing high inflation combined with the worst employment growth in decades. Yet the economy is showing some growth recovery in the organised sector which reflects in the higher GST growth and a positive PMI Index. In a way, there is no contradiction between the minister’s assertion and the opposition’s claims. Jobless growth is not such an unknown phenomenon, after all. India is seeing jobless growth and persistent inflation – which is shrinking real incomes of the majority of the households as many authentic surveys have shown.

Interestingly, the United States’ economy is experiencing the opposite of what India is facing today. The National Bureau of Economic Research (NBER) – the most reputed non-profit research body, whose data is considered a gold standard by all economic participants – has a broader measure of assessing recession. Though the US has just witnessed two consecutive quarters of negative GDP growth (January to June), the NBER has suggested that going by the strong employment growth and real incomes of households, the US is not in a recession. In fact, the US has one of the lowest unemployment rates at present even if GDP growth is negative.

Also read: What a Potential US Recession Will Mean for the Indian Economy

The NBER doesn’t follow the one dimensional definition – consecutive two quarters negative GDP growth – as a measure of recession. The Economist recently reported that the NBER had in the early 2000s declared a recession in the US based on high unemployment growth and shrinking real incomes when actual GDP growth was positive.

So, if one takes the NBER’s broader measure of employment growth and real incomes, opposition parties have a much stronger claim that India’s economy is slipping. The real incomes of the bottom 70% of the population have stagnated post pandemic as per surveys by many credible research outfits. This is real recession. Youth unemployment has been the most worrying factor as acknowledged even by the ruling party. The Agnipath controversy showed us in the starkest possible manner the festering problem of youth unemployment in India. 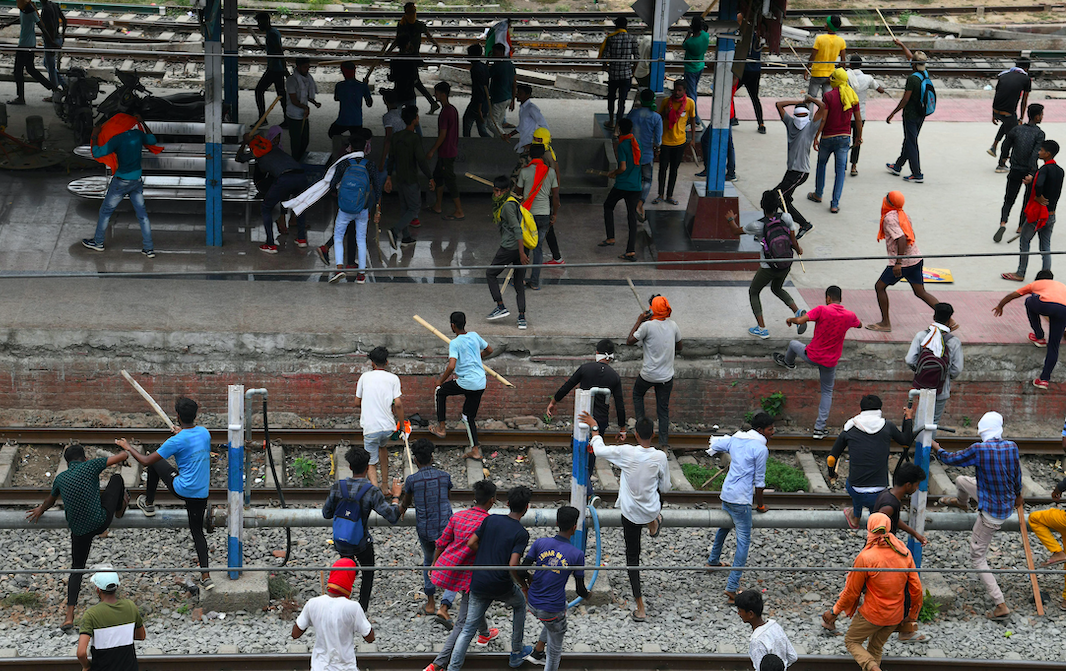 Protestors carrying sticks run at a railway station during a protest against Agnipath scheme for recruiting personnel for armed forces, in Patna, in Bihar, India, June 17, 2022. Photo: Reuters

The finance minister’s claim in Parliament that India continues to get positive GDP growth driven largely by the organised sector may be true, but it will be a big mistake to derive satisfaction from this measure alone. The finance ministry will do well to study the NBER framework followed by the United States to determine the real well being of the economy and the people.

If the Narendra Modi government is serious about this exercise, it must start by acknowledging that the informal and unorganised sectors in India have been badly buffeted by one event after another, starting with demonetisation in  2016. A badly designed and implemented GST crippled the unorganised sector so badly that their market has been poached by the bigger organised sector companies which are listed on the stock exchanges. This has happened in several consumer segments like footwear, food processing and garments. In construction, the unorganised players are all but extinct and this has affected employment in a big way, as residential construction is one of the biggest employers.

During the COVID-19 lockdown, unorganised sectors suffered further and consequently we saw permanent shifts via reverse migration to rural areas which shows up in massive increase in the demand-driven MGNREGA employment. This period has also seen an increase in self-employment – to nearly 53% of the total employed workforce. More crucially, of this 53%, nearly 30% are unpaid workers in household enterprises.

These are the structural issues which need closer study if one is to actually determine the real health of the economy through the prism of employment and real incomes as the NBER does in the the US. Beyond a point, claiming universal and broad-based revival of the economy based purely on the performance of the organised sector is highly misleading.