Three Years Into Modi's Regime, the Cracks Are Beginning to Show

Unemployment has risen and the corporate sector has taken a hit, but the Modi government is relying on statistics to create an illusion of economic growth. 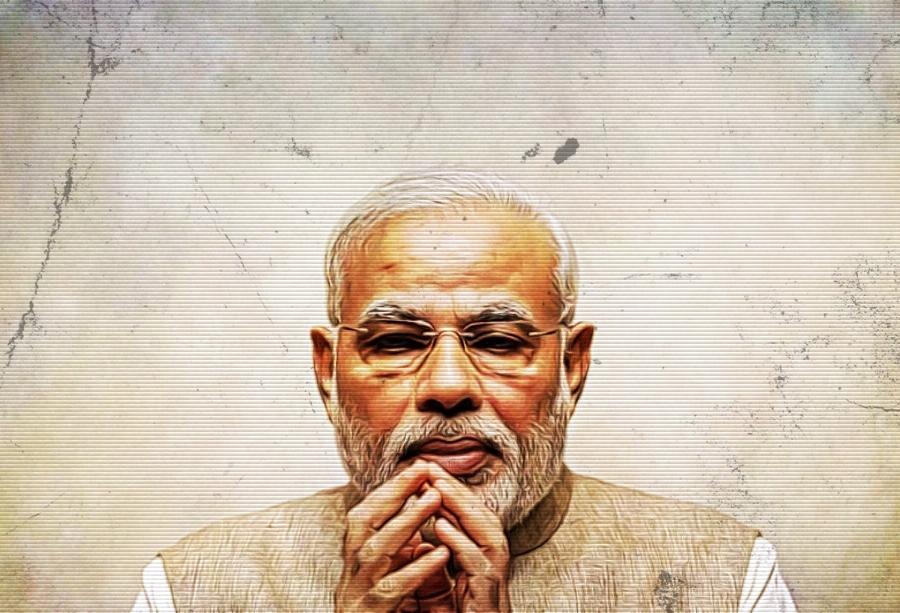 The completion of three years of Prime Minister Narendra Modi’s government has released a flood of assessments. Most of these are paeans of praise. In a recent article in Indian Express, Ram Madhav, the national general secretary of the BJP and its former spokesman, has labelled Modi India’s most trusted leader, whom he perceive as “working towards a new vision of India”.

Madhav is Modi’s subordinate, so his assessment of his boss should carry about as much weight as an assessment of Donald Trump’s first hundred days by Rex Tillerson, his secretary of state. But on one of his claims there can be no dispute: Modi has put his stamp so firmly upon this government that he has been able to extend the honeymoon period of his government, and delay the onset of anti-incumbency, by at least 18 months longer than any previous government.

Madhav ascribes this to Modi having the courage to make unpopular decisions and his ability to make the people support them. “Modi is undisputedly the most trusted leader in the country today…after many years the people of the country feel the presence of a strong and decisive leader…” What Madhav has overlooked is that while a decisive leader makes people feel secure, he also raises their expectations. Modi may have done the first, but despite being in power for three years, he has completely failed to meet the second. The failure stretches across every realm of policy, but let us start with the economy, and his promise to bring acchhe din back again.

Madhav claims that in the last three years, growth and development have been “more than satisfactory”. The truth is the exact opposite: When Modi came to power, the economy was in deep trouble. Today, three years later, it is in even deeper trouble. Far from ushering in acchhe din, Modi and his ministers have floundered around making microscopic changes to the micro economy, while the macro economy has edged steadily towards ruin.

The Modi government did not cause the downslide of the economy. But the past three years have shown that it does not have the faintest idea of how to stop it. What is more reprehensible is that instead of acknowledging that every macro economic indicator is heading south, the government has resorted to statistical legerdemain to create an illusion of growth where there has been only decline.

Let us take the most frequently quoted yardstick first – the GDP. The government has claimed a rise from 5.1% in 2012-13 to 7.9% in 2015-16. But Rajeshwari Sengupta, professor of economics at the Indira Gandhi Institute for Development Research in Mumbai, pointed out a year ago that India’s GDP growth in calendar year 2015 was actually only 5% and not 7.1% as the official statistics claimed. The growth rate was inflated because the official statistics grossly underestimated the correction needed to discount inflation in the services sector, which contributes more than half of the GDP, to obtain their estimate of growth at constant prices.

Failure to correct fully for inflation has been a problem with all recent GDP data, so the BJP cannot be blamed for taking advantage of it to claim a growth that does not exist. But what is inexcusable is its claim that the sharp jump in GDP growth from 5.1% in 2011-12 and 2012-13, in the penultimate years of UPA rule, to 7.2% in 2014-15 and 7.9% in 2015-16 is a measure of  its success, when it too is a statistical illusion caused in part by a change in the way GDP has been calculated since 2013-14, and in part by the result of a crash in world commodity prices that has followed China’s abrupt slowdown. This has brought down input costs for industry, and thereby raised value added in manufacture without any physical increase in output (GDP is measured by value added and not physical output).

Not content with massaging the GDP figures, the government has also changed the base year for the calculation of the industrial production index from 2004-5 to 2011-12, and claimed that the average industrial growth in the past three years was not the paltry 1.96% shown by the old series, but the 4.1% shown by the new series. What it has not mentioned is that this bump happens every time the base year is moved forward because it increases the weightage within the index of sunrise industries and decreases that of sunset ones. The same updating has also bumped up the industrial growth rate in the last two years of the UPA from 0.5% to 3.35%.

For during these years, employment in industry has fallen sharply. This is the one infallible indicator that no amount of wrangling over numbers can hide. For reasons that defy understanding, the Indian government has not created a single index for change in employment. But since 2008 it has been collecting quarterly data on job growth in eight labour intensive industries, and these show that there has been a seven-fold decline of job growth in them, from an average of 900,000 a year in 2010 and 2011, to 135,000 in 2015 and 2016. Even the vastly reduced job growth in each of the UPA’s two final years, of 420,000, was more than three times this number.

It is possible to make a rough extrapolation of the change in employment growth in the entire economy by comparing these figures with the estimates of total employment growth given by the decennial Census and the quinquennial National Sample Survey. Both put the figure for 2009-10 and 2010 at over seven million a year. This means that at least during Modi’s tenure around eight million young people who join the labour force every year are being forced to join what our statisticians call the “involuntarily self-employed”. They have no security, no future and, therefore, no stake in stability. So it is no surprise that tens of thousands of them have found ‘self-employment’ as cow vigilantes, and prey upon others who are even poorer than they, to survive.

The other victim of our policymakers’ failures has been India’s much vaunted corporate sector. A moribund share market in which initial public offerings of equity shares have dried up because people are not willing to invest in them has forced promoters to rely heavily on domestic and external bank borrowing at sky high borrowing rates of 11-14%. This have combined with a crash in the exchange rate after 2012 to more than double the cost of servicing debt in the last six to seven years, while simultaneously choking domestic demand and drying up their current revenues. Once the envy of China’s policymakers, much of the new corporate sector is now on its last legs, gasping for breath as it dies a slow death.

Nearly all the entrepreneurs who had embarked on the modernisation of India’s stone age infrastructure are facing bankruptcy today. Fifty of these owe the banks more than Rs 10 lakh crore, or one seventh of the country’s GDP.

The most recent victims are the mobile telecom companies that transformed the face of India a decade ago and created millions of jobs. Burdened under the debt created by the 4G auction and crippled by the no holds barred competition launched by Mukesh Ambani’s Reliance Jio, the telecom sector’s debt, (Rs 8 lakh crore), is almost 16 times its gross earnings before tax, interest, depreciation and payback of the principal. No one holds any serious hope that they will be able to survive on their own. The government has set up a committee to examine its problems, but the measures that will be required to save the sector are not within its terms of reference.

The credit for the destruction of India’s growth has to go to the RBI, which first snatched control of money supply from the government in January 2007, and began squeezing credit relentlessly by raising interest rates to control the continuing price rise, and persisted with this suicidal course unmindful of its failure. The resulting high interest rate regime – perhaps the highest real rate regime in the world, has been in place for eight of the last ten years – has destroyed India’s future.

Wise investors, who saw what was coming, simply abandoned their projects to cut their losses. As a result, two years ago there were Rs 880,000 crores worth of abandoned projects, nearly all in infrastructure and heavy industry.

Older, cannier corporates, who had not taken up infrastructure projects, simply stopped investing in India and took their money elsewhere: between 2008 and 2015, $70 billion of Indian corporate capital found its way into fixed investments abroad. Not surprisingly, the gap between existing and required investment in infrastructure has widened to Rs 500,000 crore a year .

What has been unforgiveable is the RBI’s failure to grasp what any second year student of economics knows: that curbing credit lowers prices only when there is too much money chasing too few goods. But as former chief economic adviser Kaushik Basu pointed out in his most recent book, this was never the case in the 2000s.

All the inflation India experienced between 2006 and 2014 was caused by occasional droughts and freak weather occurrences; steadily increased administered prices of food and cash crops; rampaging global commodity prices caused by China’s runaway growth till 2013; and a mounting shortage of public goods like health, land for housing and education.

Crushing domestic demand in a single country to remedy this was akin to the medieval remedy for a fever, which was to attach leaches to the patient’s body to suck out his blood. As often as not, the fever came down, but the patient died. Despite their impressive degrees, the RBI’s governors and their advisers have known little more about the economy than the medieval European doctors knew about the human body.

Modi came to power with no baggage of past policies to defend. So he had the chance to make policy on a clean slate. What is more, in July 2014, China went into a severe recession and global commodity prices crashed. So in India, wholesale price inflation became negative and even the cost of living index, which mostly reflects shortages of public services created by government failure, fell sharply.

Modi and finance minister Arun Jaitley, therefore, had a golden opportunity to instruct the RBI to bring down policy interest rates very sharply. Had the RBI halved borrowing rates as Yashwant Sinha had done between 2000 and 2002, all but a few of the 50 companies now facing bankruptcy proceedings today would have survived and many of the abandoned projects would have been revived.

But Modi kept every seasoned economic minister of the Vajpayee government out and asked a lawyer to become an instant economist. These are sins, born of incompetence and hubris, for which his government will be called to a reckoning before very long.