Modi Govt's Fiscal Policy on Welfare: Trends So Far and What to Expect

Union government spending on health and education has been sub-par for far too long. This is the second article in a two-part series produced by the CNES InfoSphere team analysing past budget trends, the current state of the economy, and the possible scenarios of actions considered for Budget FY2023. Read the first article here.

This article looks more specifically at the Narendra Modi government’s fiscal policy towards social welfare and the development sector.

The Union public expenditure on healthcare in India was hovering around 1.2% of GDP since 2014. It was only around 2020-2021 that the overall expenditure rose above 2%. This was largely because of COVID-19-related spending that was temporal and did little to improve the overall medical (non-COVID-19) infrastructure.

Keep aside the ‘state vs Union’ constitutionality of ‘who spends on healthcare and education’ – the Union government has spent sub-par on these areas for far too long and expects far more from the states on the subject of supporting long term fiscal outlays. The figure above shows the public expenditure on healthcare since FY 2014-15. The trend line has a measurable slope of 0.1154, suggesting that the increase in year-to-year expenditure levels to 0.1154%, and that too appears from a disruptive rise in covid related spending done in 2020-21. Compared to most well performing emerging market economies, India still spends the least on healthcare, particularly on a per-capita basis. Japan spends around 9% of GDP and Brazil, another developing country, spends around 4%. The above figure illustrates state-wise expenditure on medical, public health and family welfare (as a ratio of aggregate expenditure, for the past three years).

A majority of the states still spend roughly 5% of GSDP on public health and family welfare (NCT of Delhi spends the highest).

On education, the Union government expenditure on (higher) education since FY 2014-15 has increased but only marginally. Moreover, in relation to India’s population and the much popularised demographic-dividend chorus, the current rate (and pace) of spending is too low.

This is also concerning as the New Education Policy (NEP) requires drastic changes for the long-term plans to support education for all. With minuscule public funding, and the existence of problems like shortage of teachers in rural schools and lack of proper infrastructure, it will be a chimera to anticipate that implementation of NEP is made possible in an efficient and effective manner.

The UGC draft bill being tabled now to invite ivy leagues to set up campuses in India is also (somewhere) a realisation – a signal by the Modi government that it considers higher education not a right, but a privilege, a private good, entitled to a few by the most affluent (unaffordable) institutions. It also speaks of the disaster that the UGC has been, failing to create ‘institutions of eminence’.

On research and development, as seen in the figure below, Union government expenditure since 2010-11 has been oscillating between 0.78% and 0.7% of GDP. It has always been under 1% of the GDP. The Modi government hails India’s role in the world as a ‘Vishwaguru’ but compared to more advanced nations like Japan, South Korea and the US, India spends the least on promoting research and innovation. The average expenditure in 2018 on research and development by low- and middle-income countries was around 1.5%, while India’s remained below 1% for over a decade.

Moreover, agency wise, the highest percentage of research and development expenditure is by the Defence Research and Development Organisation (DRDO) at 31.6%, followed by Department of Space (DOS) and Indian Council of Agricultural Research (ICAR) at 19 and 11.1%. 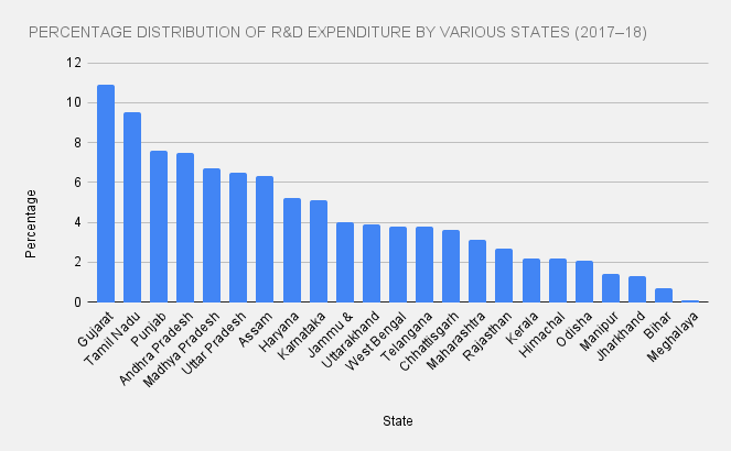 Here we plot the numbers on the volume of government spending on various social welfare schemes, such as MGNREGA, PMGSY, PLI, Ayushman Bharat, and the PM-Poshan scheme and their share in the Union Budget.

MGNREGA’s importance as one of the largest job-security social welfare scheme in the world is defined by the fact that under the scheme every rural household where an adult member works manual labor has a guaranteed 100 days of paid employment per year.

The programme, which guarantees at least one-third of the jobs to women, has become a crucial safety net for low-income residents and migrant workers in rural areas. 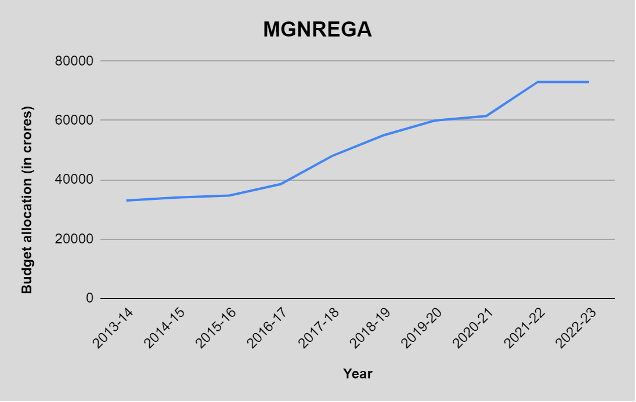 As seen in the figure above, the funds allocated for the MGNREGA were lowered by 25.2% to Rs 73,000 crore under the 2022–23 Budget, which was announced by finance minister Nirmala Sitharaman. In the previous year, that is FY 2021-22, Rs 98,000 crore had been set aside under the programme’s updated estimate in the previous budget.

The scheme received a significantly more amount of funding in 2020–2021 and 2021–2022 to accommodate the demand for work during the COVID–19 epidemic, which is essentially why there has been a reduction, as we can tell from the figures of the current budget. Net-net overall spending in MGNREGA has remained sub-par. Wage payments have been delayed as well.

Interestingly, when we compare the data of the spending of the UPA government on this scheme, to the current government, as a percentage of overall government expenditure, annual spending on MGNREGA, 2.4% is in the same range as in UPA, which is close to 2.6%.

Continuing with our scheme-wise analysis, we move onto the Pradhan Mantri Gram Sadak Yojana (PMGSY) which aims to connect all eligible unconnected habitations that are part of the country’s core network to all-weather roads.

The ministry has been spending less than what was budgeted since 2016–17. Between 2016–17 and 2020–21, there has seen a worsening tendency in underutilisation. In the figure above, we see that the allocation to Pradhan Mantri Gram Sadak Yojana (PMGSY), the rural roads construction scheme, in the budget for the year 2022-23 has been raised by a stupendous 36 per cent to Rs 19,000 crore. Although the allocation for 2022–23 is significantly higher than the revised forecasts from the previous year, the program’s spending has been falling since 2015–16.

On further analysis, we see that the Modi government has laid out and built roads much faster than the UPA government, having almost trebled the construction of rural roads. Several thousand roads have been built and this has been done at a much faster rate than the UPA-led regimes. If we compare the NDA’s performance with UPA-II, NDA has done better in road construction. 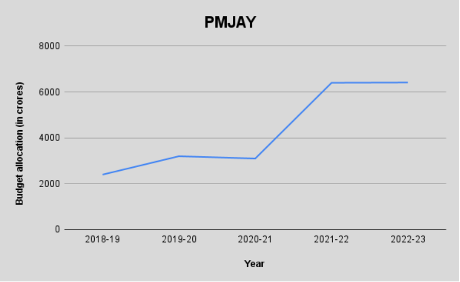 As seen in the figure above, in 2022-23, PMJAY has been allocated Rs 6,412 crore – this is double the estimates of 2021-22 (Rs 3,199 crore). Experts are predicting that this amount may be low considering the expenditure required on PMJAY.

The amount of money that should be allocated to health-related programmes should be between 2.5 and 3 percent of the GDP. Ayushman Bharat, the state health scheme framework, needs to be continued to be emphasised.

Additionally, the primary healthcare care system needs to be strengthened and the goals of the National Digital Health Mission need to be implemented gradually through regional pilot-based rollouts.

The Mid-Day Meal (MDM) programme aims to give school-age children nourishment. Schoolchildren are provided with healthy cooked lunches as part of this programme. The programme was given the new name PM-POSHAN in September 2021. 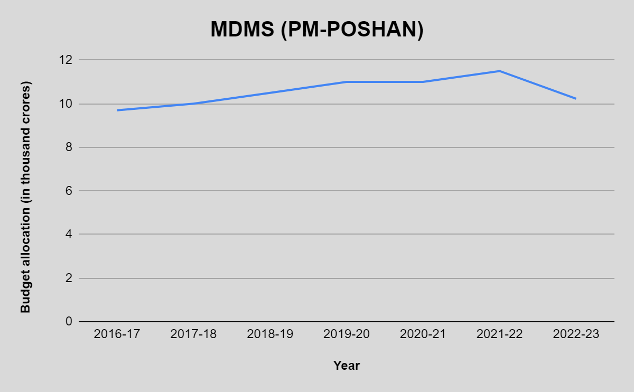 The real issue: Where’s the money now to spend more on welfare?

The Union government’s own tax revenue (and non-tax revenue) situation has been bad for some years now.

While it wants to increase spending on capex, more than 65% of budgetary requirements are on the revenue expenditure side (due to the high interest payment costs and government wages/salaries, social welfare needs). This government has compromised on that, while projecting the need to ‘spend on growth’. Now, it has less money to even do that.

On other revenue sources, the Modi government, across terms, has consistently failed to meet its own set disinvestment targets year after year.

When we see the released budget numbers for 2022-23 more closely, our sense is that we will again see the government not meeting the targets it envisaged in 2022 budget (much like what was seen in 2021 and 2020). That is likely to accentuate the fiscal deficit problem, which has already been a serious concern.

Maybe, but one must ask the Union finance minister a question: Why was all that money over the last few budgets spent on capex, private investment boosting needs, when the results on efforts at growth weren’t seen?

In the time of a pandemic-induced crisis, there was room to maybe encourage a job-focused social security plan (an urban designed MGNREGA) or provide higher outlays for rural-MGNREGA where the rural job demand has outweighed, by a large margin, the existing scale of spending (both in terms of job creation and payment of wages). This could have complemented capex spending, but wasn’t.

Through supply-side economics, the Modi government’s fiscal roadmap has indifferently ignored demand side considerations. And, if this is still the path the government takes, we might see another bad year for overall social sector expenditure for the vulnerable and the poor: with less outlays for women-child-nutrition based schemes, and even lesser outlays for MGNREGA and other job-focused social welfare plans.

The poor maybe expected to make their living out of the ‘free ration’ promised while the ultra-rich class of corporate class rake in profits from hyper-optimistic stock market illusions, and through continued government support.

This is an essay extrapolated from the latest edition of the InfoSphere team, Centre for New Economics Studies (CNES), Jindal School of Liberal Arts and Humanities, OP Jindal Global University.