While upholding the legal validity of demonetisation, the Supreme Court said it was not relevant whether the objective of the decision was achieved or not. But what indeed was the objective? 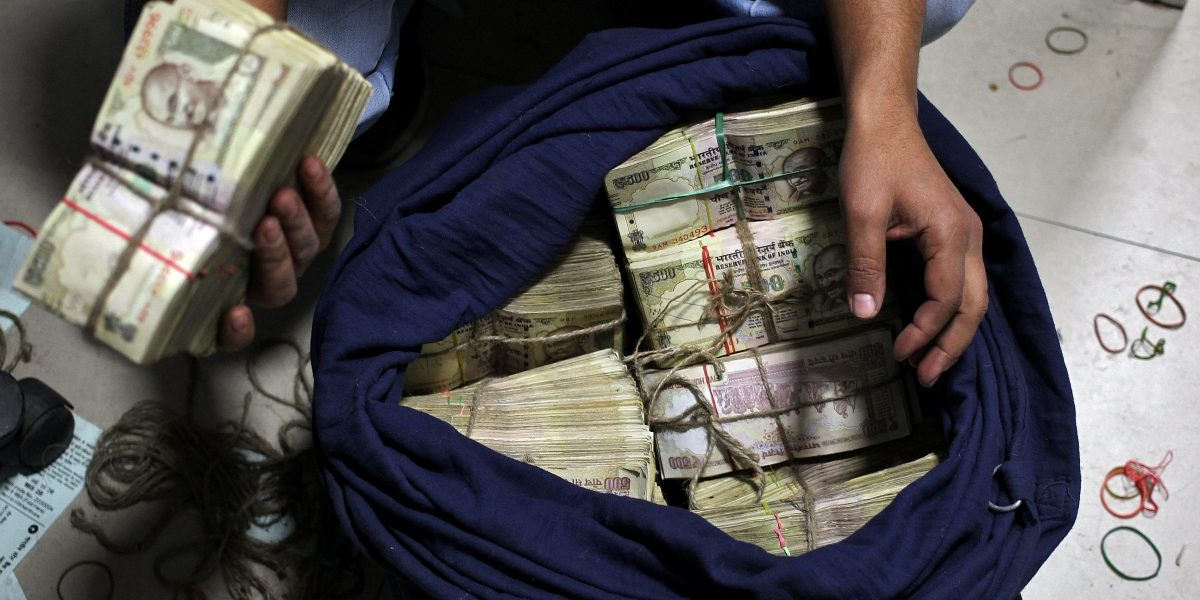 Representational image. A bank employee takes out a bundle of old Rs 500 banknotes from a sack to count them inside a bank in Jammu, November 25, 2016. Photo: Reuters/Mukesh Gupta

Note: This is an updated version of an article that was originally published on August 31, 2017.

New Delhi: The Supreme Court on Monday, January 2, upheld the legal validity of demonetisation, saying the decision had “a reasonable nexus with the objectives” like eradicating black marketing and terror funding that it sought to achieve. “It is not relevant whether the objective was achieved or not,” Justice B.R. Gavai, who authored the majority judgment, added.

But what was the real objective behind demonetisation? Was it to curb corruption, hit the black economy and recover black money? Was it to force India into the digital economy era? Was it a way to tackle terrorism, trafficking and other such crimes? Or was it all part of efforts to herald change in India’s economic and political funding landscape?

More than six years after Prime Minister Narendra Modi on November 8, 2016 announced the decision to withdraw the legal tender of Rs 500 and Rs 1,000 notes in circulation, these questions still do not have an answer.

Just nine months after demonetisation, RBI data revealed that 99% of demonetised currency was now back with the banks. In the months after the decision, it became clear that the BJP-led government did not have one consistent rationale behind the notebandi exercise. In fact, the lack of any real cause was evident in the government’s shifting goalposts over the months.

According to the government, the real objective behind demonetisation was:

1. To break the grip of corruption and black money

In his November 8, 2016 speech, when demonetisation was first announced, Modi told the country, “For years, this country has felt that corruption, black money and terrorism are festering sores, holding us back in the race towards development. … To break the grip of corruption and black money, we have decided that the five hundred rupee and thousand rupee currency notes presently in use will no longer be legal tender from midnight tonight, that is 8th November 2016.”

2. To make India a cashless economy

On his Mann Ki Baat radio show on November 27, 2017, the prime minister said, “Scrapping these notes has opened other avenues to make payments. Download apps of banks and e-payment options. Shopkeepers can keep card swiping facilities and everyone can ensure they pay safe using their credit and debit cards. If not a 100% cashless society, I request you to make India ‘less-cash society’.”

By November 27, he had used the phrase “digital/cashless” thrice as much as “black money”, while mentions of “fake currency” had disappeared. A digital or cashless economy had found no mention at all in his original November 8 speech.

3. To target the corruption of the privileged

In the same Mann Ki Baat episode on November 27, the prime minister linked demonetisation to the corruption of the privileged. “After accumulating black money, they are now using the poor to bring their black money back in the system. I appeal to them that please don’t use the poor and don’t make them put your black money in their bank accounts. The government is implementing the benami property Act and it will create more trouble for people holding such property,” Modi said.

At a rally in Bhatinda two days before that, the prime minister said, “I want to protect the rights of poor and middle class. People are forced to pay bribe in schools, hospitals and when they want to buy land. I am thankful for the support of people in the fight against black money and corruption.”

4. To bring ‘idle’ savings into the banking system

Demonetisation had been carried out to force Indians to put “domestic savings lying idle at home” into the banking system, economic affairs secretary Shaktikanta Das said on December 7, 2016, so that banks can use that money to “give loans at lower interest rates”.

5. To neutralise money held by Maoists, terrorists and human traffickers

On December 27, 2016, Modi said that demonetisation had neutralised the money held by Maoists, terrorists and human traffickers, thereby cutting off their business.

“With just one move on November 8, the worlds of terrorism, drug mafia, human trafficking and fake note smuggling were destroyed,” Modi said at a BJP rally in Dehradun.

“Cash held by terrorists, Maoists and other extremists has also been neutralised. There has been a crippling impact on dangerous and highly damaging illegal activities, such as human trafficking and narcotics,” he said in an interview two days later.

6. To do away with black money, combined with electoral reform

In an interview to a TV channel on December 29, 2016, the prime minister linked election reforms to demonetisation for the first time. “Demonetisation coupled with election reforms will also give the nation and economy a big boost against black money,” Modi reportedly said. What these electoral reforms are has not yet been publicised.

7. To expand the tax base

On January 11, finance minister Arun Jaitley told a parliamentary panel that “Targeted verification of suspect substantial deposits is likely to widen and deepen the tax base” after demonetisation.

“Along with other measures for increasing transparency and strengthening enforcement, the demonetisation will pave the way for sustainable faster economic growth,” the minister added.

8. To bring down real estate prices

“Real estate you do see a blip in prices, sales and launches and of course some of it may be adverse to the economy but in the long, some of that could be good because aim of the demonetisation is to bring down real estate prices,” chief economic advisor Arvind Subramaniam said on January 31, 2017. This was the first mention of lower real estate prices as being one of the goals of demonetisation.

9. To create a ‘larger and cleaner’ GDP

On February 13, 2017, finance minister Arun Jaitley said, “Demonetisation was a bold and decisive strike in a series of measures to arrive at a bigger, cleaner and real GDP.”

10. To integrate the informal economy into the formal sector

“There is greater integration of informal economy taking place with formal economy that leads to larger and cleaner GDP, that was our objective behind the decision on demonetisation,” Jaitley said, also on February 13.

“We are moving from informal to formal economy and the government is now seen as a trusted custodian of public money,” Jaitley added in his Budget speech on February 1.

11. To partner with the GST in reducing the cash in the system

“Demonetisation coupled with the implementation of Goods and Services Tax (GST) regime will make generation of cash a lot more difficult, help towards the objective by creating greater compliance and increasing digitisation,” Jaitley said on July 23.

Demonetisation was also needed to ensure a “smooth” GST, the BJP national executive had said in January.

Was the exercise ‘successful’?

On August 21, Jaitley had claimed that demonetisation had “starved” Maoists and separatists in Kashmir. “Stone pelters used to gather in thousands on the streets of Kashmir before demonetisation was announced, but now not even 25 come together for such agitations,” he said. A fact-check proved, however, that that wasn’t true.

While defending the demonetisation move in front of the Supreme Court in November 2016, then attorney general Mukul Rohatgi had said that out of the total estimated money in circulation of Rs 15-16 lakh crore, the government expected people to deposit Rs 10-11 lakh crore in banks. “The rest, Rs 4-5 lakh crore, were being used in northeast and Jammu and Kashmir to fuel trouble in India. That will be neutralised,” he had said.

What did RBI think of key assertions?

Though the RBI’s central board, in a meeting convened barely four hours before Prime Minister Modi announced the decision to the public, approved the move, they rejected two of the stated objectives for the move: elimination of black money and counterfeit notes.

The RBI’s directors stated that most black money is held in the form of assets like gold or real estate – on which demonetisation would not have any material impact.

The minutes of the 561st Meeting of the Central Board of Directors of the RBI quote them as saying:

“Most of the black money is held not in the form of cash but in the form of real-sector assets such as gold or real-estate and that this move would not have a material impact on those assets.”

On the government’s reasoning that the move would “eliminate counterfeit notes”, the central bank’s directors said that while any incidence of counterfeiting is a concern, “Rs 400 crore [the estimated value of counterfeit notes] as a percentage of the total quantum of currency in circulation in the country is not very significant”.