Nervous investor sentiment over the coronavirus and global oil politics saw the Sensex take its biggest ever single-day fall in absolute terms. 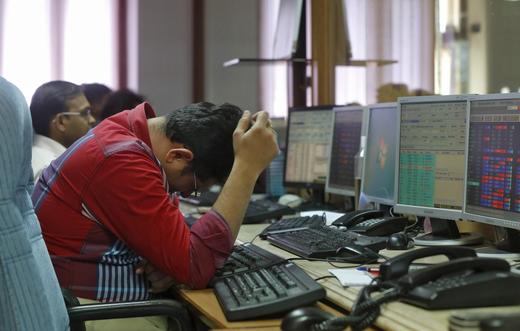 The benchmark 30-share Sensex fell over 2000 points during the lowest point of trading on Monday. Photo: Reuters

New Delhi: India’s stock markets nosedived on Monday, with the benchmark BSE Sensex posting its biggest ever single-day fall in absolute terms by plunging up to 2,400 points before recovering to trade at 1,941 points lower than Friday’s close.

Nervous investor sentiment over the economic fallout of the coronavirus and global oil politics drove both the Sensex and Nifty below their respective psychologically crucial levels of 35,000 and 10,500 during intraday trading, before recovering towards the end of the day.

A sell-off, which was primarily driven by global factors and cues, wiped off over Rs 7 lakh crore of Indian investor wealth.

“Today is a Black Day for the financial market as we have seen a horrific fall in equities, commodities, and currencies after Crude oil plunged more than 25% in one of the biggest one-day falls since the Gulf War of the early 1990s. Investors are literally bracing for a race to the bottom, as an all-out Opec ‘price war’ erupts between Saudi Arabia and Russia,” said Ajay Kedia, Kedia Advisory.

The broader Nifty50 index was hovering around 10.400 levels, down around 550 points, or 5%. All the Nifty sectoral indices were in the red. Nifty Metal index, down 4%, bled the most.

Over 770 stocks hit their 52-week-low on the Bombay Stock Exchange.

Mukesh Ambani-owned Reliance Industries saw its share price suffer its worst fall in 12 years during intraday trading. RIL’s share price fell 13.65% to Rs 1,094.95 on BSE, before recovering slightly to end the day at Rs 1,104.50. After this fall, IT major TCS appears to have pipped the Mukesh Ambani-led conglomerate to become the top company in terms of market capitalisation on BSE.

“Indian markets are facing a deluge of negative triggers. Global markets are plunging after the break of an alliance between OPEC and Russia resulted in the worst one-day crash in crude prices (more than 30%) in nearly 30 years, fueling panic triggered by the escalation of the coronavirus epidemic,” said Deepak Jasani, head retail research, HDFC Securities

“The panic began after Saudi Arabia shocked oil markets by launching a price war. Italy placed nearly 16 million people under semi-lockdown and the number of confirmed cases in Europe continues to rise. China’s exports fell 17% in the January-to-February period compared to a year before, according to data released over the weekend. Imports fell 4%. This data shows the slow recovery in China. All this while the local markets were recovering out of the Yes Bank issue,” Jasani added. 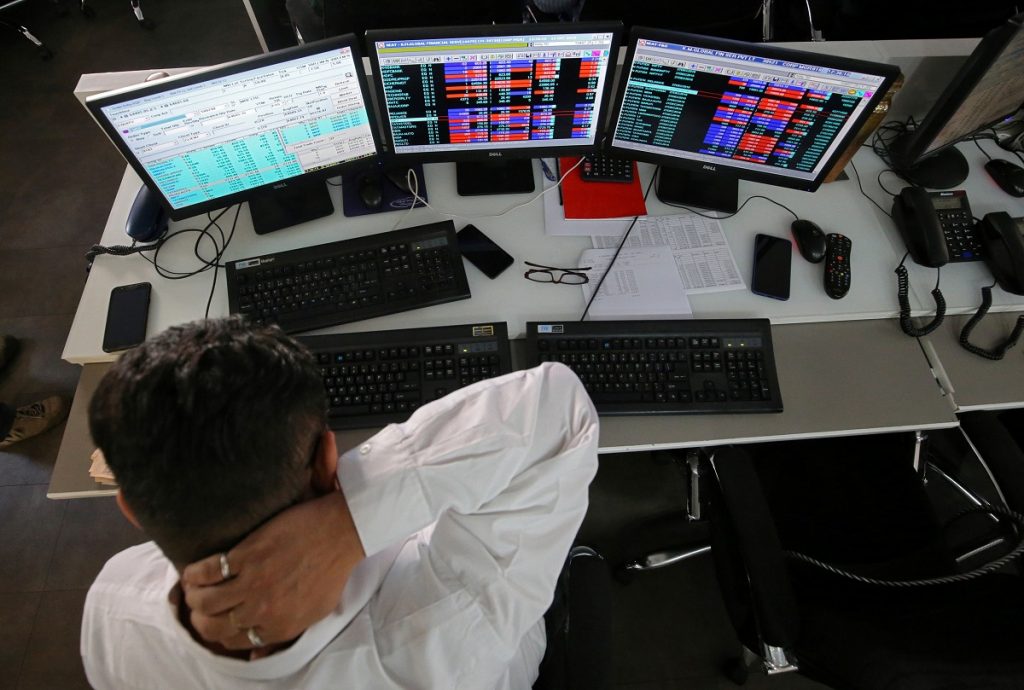 A broker at his computer terminal in Mumbai. Photo: REUTERS/Francis Mascarenhas/File

Crude oil remained stuck in the lower circuit this morning, shedding as much as 30% in the first two hours of trading on the Multi-Commodity Exchange. The meltdown in crude had a trickle-down effect on gold, silver and base metals.

The fall was triggered by the crash in global crude following the price war between Russia and Saudi Arabia. Brent fell to $31 a barrel in the morning, down over 30% from Friday’s close after Russia backtracked from the OPEC production deal and instead increased production further to make US shale oil production unviable.

This led to a price war with Saudi Arabia also raising production and lowering the price, causing panic across markets and asset classes, and a rush to meet losses in derivatives of all assets including equities, debt, currency and commodities. The Indian commodity derivatives market is price taker in major commodities like precious metals and energy, apart from base metals.

As a result many players who had gone long on crude oil had to pay additional margins beyond the 20% they had paid earlier, under MCX’s dynamic margin structure. Globally too, there was a sell-off across the board to meet losses in crude oil and equities.

With an extra oil output of up to 3.1 million barrel per day pouring into a slowing global economy that is now also having to deal with the coronavirus pandemic, Kedia said, “It will be rough sledding for the oil sector going forward. The price crash came at a difficult time for US shale, and has posed a conundrum for President Donald Trump. Lower oil prices are an important part of his pitch to voters, and he has frequently calling on Opec to bring them down. But a prolonged price fall could spell economic trouble for energy-producing states such as Texas and North Dakota.”

In MCX futures, crude oil was down 29 per cent in the afternoon, recovering over 4 per cent from the day’s low. All metals were down with aluminium shedding 1.5%, Nickel 3.8% and copper and zinc 2.5% and 4% respectively. Agro commodities were also were impacted.

“Today’s fall in crude oil prices may also impact other commodities like metals and farm commodities. All commodity segments corrected drastically. In general, crude is the primary driver for global growth. Fall in crude oil prices at a time when several countries are struggling to take on the spread of the coronavirus has created an emergency situation and fear of global economic growth slowdown,” said Anuj Gupta, deputy vice president (research), Angel Broking. 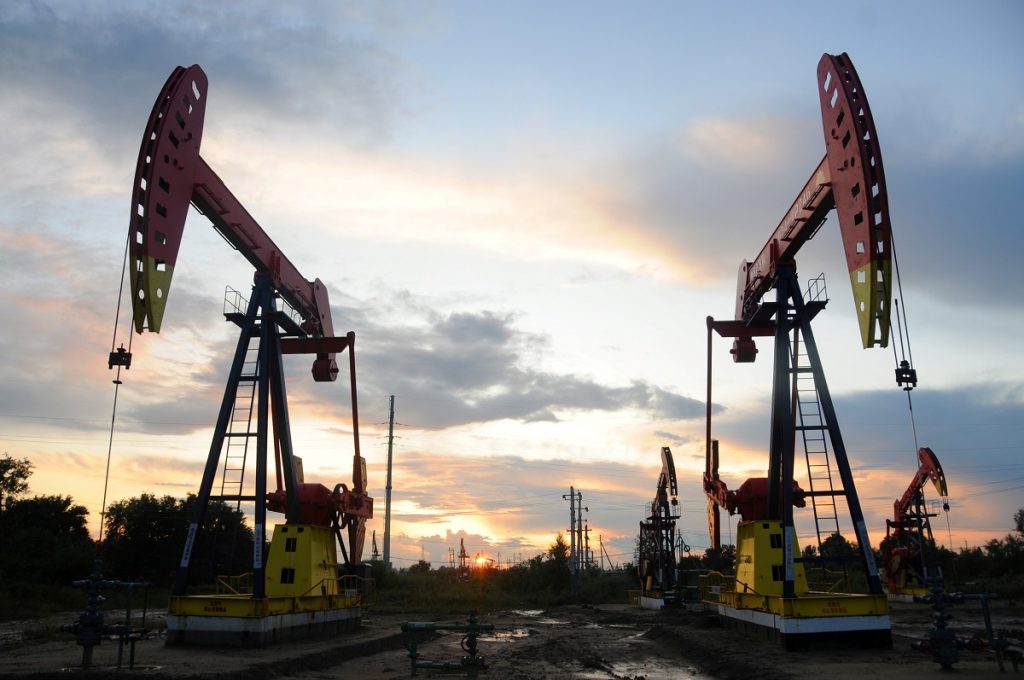 Meanwhile, stock markets around the world also plunged on Monday after Saudi Arabia launched a price war with Russia, sending investors already panicked by the coronavirus fleeing for the safety of bonds and the yen.

Saudi Arabia had stunned markets with plans to raise its production significantly after the collapse of OPEC’s supply cut agreement with Russia, a grab for market share reminiscent of a drive in 2014 that sent prices down by about two thirds.

The pan-regional STOXX 600 tumbled into bear market territory – a drop of more than 20% from recent peaks. Oil stocks suffered massive losses with Tullow down 57% and BP down 27% in early trade.

In Asia, stocks and emerging market currencies with exposure to oil tumbled in volatile trade while the safe-haven yen surged.

Heavy selling was set to continue on Wall Street with US futures hitting their down limit.

Investors drove 30-year US bond yields beneath 1% on bets the Federal Reserve would be forced to cut interest rates by at least 75 basis points at its March 18 meeting, after having already delivered an emergency easing last week.

“Not just us, but across the globe you would have every broker/dealer raising their margin requirements … trying to basically protect our clients from trying to leverage too much risk or guess where the bottom is.”

MSCI’s broadest index of Asia-Pacific shares outside Japan lost 4.4% in its worst day since August 2015, while Shanghai blue chips fell 2.9%.

The number of people infected with the coronavirus topped 110,000 across the world as the outbreak reached more countries and caused more economic carnage.

Most of Italy’s stocks failed to open after the government ordered a lockdown of large parts of the north of the country, including the financial capital Milan.

There were also worries that US oil producers that had issued a lot of debt would be made uneconomic by the price drop.

Not helping the mood was news North Korea had fired three projectiles off its eastern coast on Monday.

“After a week when the stockpiling of bonds, credit protection and toilet paper became a thing, let’s hope we start to see some more clarity on the reaction,” said Martin Whetton, head of bond & rates strategy at CBA.

“Dollar bloc central banks cut policy rates by 125 basis points, not as a way to stop a viral pandemic, but to stem a fear pandemic,” he added, while noting that many central banks had little scope to ease further.

(With inputs from Reuters and Business Standard)