Lessons to Learn from the Kashmir Floods

The floods in Jammu and Kashmir caused unprecedented devastation, but it is imperative to learn from that experience to minimise the impact of any future such natural disaster 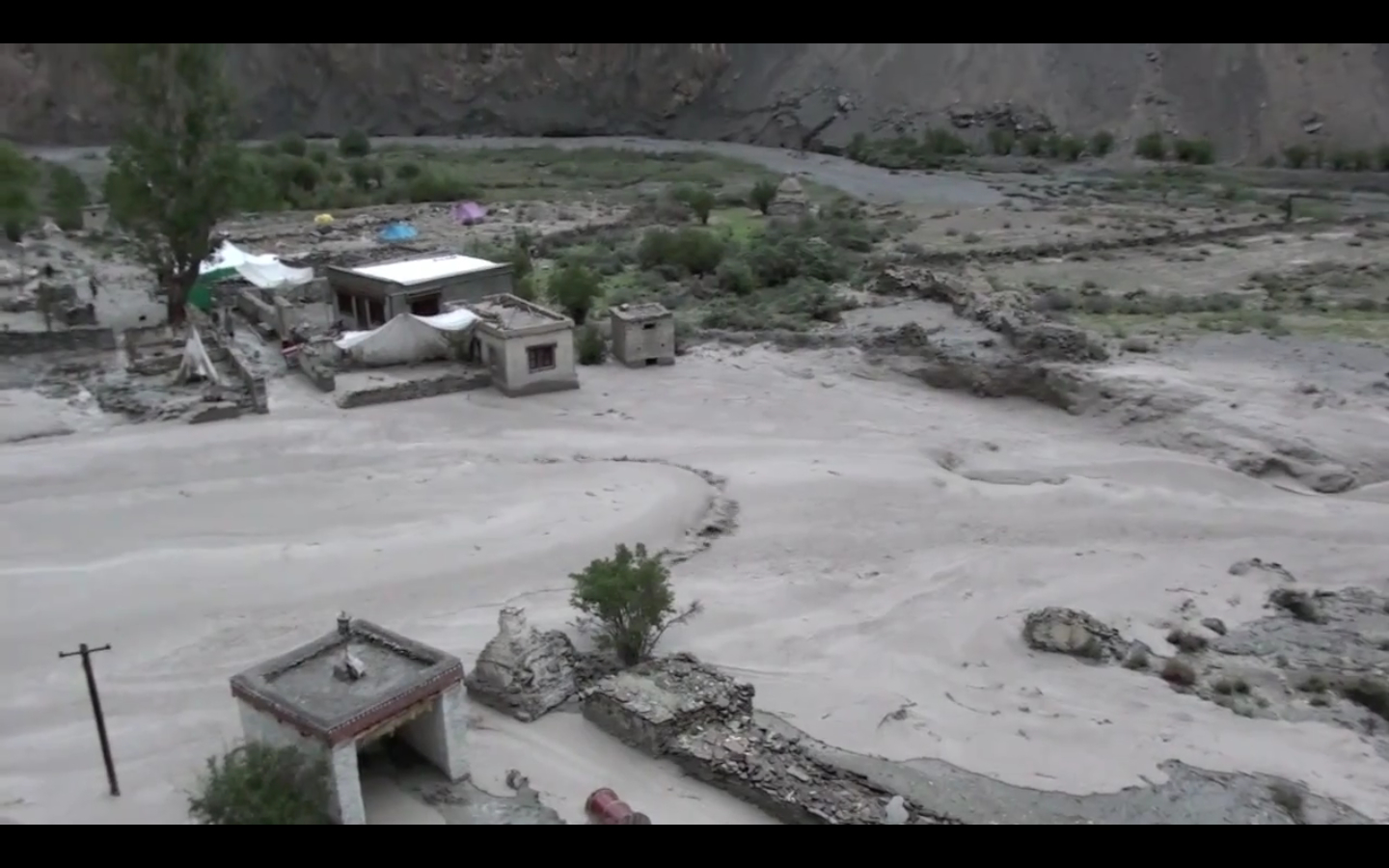 A picture of the 2010 floods in Ladakh. Credit: Wikimedia Commons A picture of the 2010 floods in Ladakh. Credit: Wikimedia Commons

In recent days, Srinagar has seen high profile, well publicised visits by two Parliamentary Committees. One was led by Ashwini Kumar and the second  by Hukum Singh. Both committees visited flood affected areas, had discussions with government officials and civil society groups, and said that they would press the Centre to urgently take up flood management and the rehabilitation and reconstruction of damaged infrastructure. Singh, Chairman of the Water Resources Committee of Parliament told reporters, “The September 2014 floods caused massive devastation. The reconstruction cannot be achieved without liberal finances from the centre. It was a natural disaster and it can be managed [only]  through national resources.”

These parliamentary visits also coincided with the news on  June 3, that the World Bank has approved 250 million dollars (about Rs 1600 crores) under the  “Jhelum and Tawi Flood Recovery Project”, for flood affected Infrastructure and strengthening the capacity of the J&K government to manage natural disasters. The World Bank project, according to the official description,  “will restore and improve the connectivity disrupted by damaged roads and bridges. The infrastructure will be re-designed to withstand earthquake and floods as per the latest official design guidelines. Another key component of this project will be to strengthen and reinforce existing weak and vulnerable flood control infrastructure. Investments will primarily include rehabilitation/ renovation of storm water pumping stations in several areas.”

These developments should bring cheer to the Kashmiris who have been very resentful of the slow response of the Modi government in restoring the infrastructure as well as the economy that was so severely damaged during last year’s floods.

It has taken the Modi government and  Parliament nine months to focus on the 2014 Kashmir floods, assess the damage and address the issues of rehabilitation, reconstruction and put in place long-term efficient flood control management in place. That said, it is good that everyone has now swung into action.

All this is happening against the backdrop of warnings by experts of another smaller flood anytime now. History teaches  us that a smaller flood usuallyfollows within a year or two of a major flood. There is a simple explanation for this is – as the water bodies and ground are saturated with water, they have no capacity to further absorb water. Even a normal rain can, therefore, cause flooding. The geography of Kashmir and the Jhelum basin is particularly prone to floods. It is therefore important to understand  the technical factors  behind last year’s disastrous flooding.

Historically, the Kashmir valley is highly prone to floods due to its geographical structure and location. The hydrographic features and the drainage characteristics of the Jhelum river system have led to  the high frequency of floods ever since the valley assumed its present form after draining out of the ancient Karewa Lake, the Satisar. The valley is surrounded by mountains through which a silent river of about 225 kms flows. The mountains on the right side are closer to the river than the left side. There is a level difference of about 24 metres from Khannabal to Khadanyar, with a varying bed slope of 1/8000 to 1/12000.

Jammu and Kashmir  witnessed intense rains during the week of 1-7 September 2014. The causes of excessive rainfall were the combined effect of the western disturbances (WD) and their interaction with monsoon rains over J&K. With the urbanized and mismanaged floodplains of the Jhelum lending impetus, the situation attained disastrous dimensions. That was also due to the prolonged extreme precipitation events observed over the entire Kashmir valley during the first week of  September, exacerbated by the higher snowmelt runoff from the extensive snow–packs observed in the mountainous regions in 2014.

There are two major reasons behind the flood vulnerability of the Kashmir valley – the inadequate carrying capacity of the river Jhelum from Sangam (Anantnag) to Khandanyar (Baramulla), and the natural flat topography of the Jhelum basin. The capacity of the flood spill channel in Srinagar has reduced from its original 17,000 cusecs to 5,000 cusecs. The Jhelum channel (capacity 35,000 cusecs) and flood spill channel proved insufficient to accommodate the enormous discharge of floodwater in September measuring more than 1,20,000 cusecs. The floodwaters of such enormous volume led to the inundation of Srinagar.

Four tributaries of the Jhelum simultaneously brought water with enormous force and high speed at Sangam near Ananatnag. This made it difficult to manage the floodwaters. Several experts have suggested that perhaps the timing and arrival of rainwater from each tributary can be staggered to enable management of floodwaters at Sangam. The expert committee set up by the Central Water Commission has also suggested water storage in the mountains on each tributary to which flood waters could be diverted during floods and released slowly after the event. But all these suggestions would need proper studies to see what is possible in this ecologically sensitive mountain area. Would such storage be allowed under Indus Water Treaty? No doubt the government will consider all these aspects as they have long-term implications.

What measures then are required for flood mitigation in the Jhelum basin? We cannot prevent floods but steps can be taken to manage floods better. At a seminar on the Kashmir floods last year, experts put forward many suggestions.

In the process of urbanization, Srinagar has lost many wetlands and water bodies over the decades. Flood spill channels have been encroached upon and residential colonies have come up there. During the floods of last year, these areas were the worst affected. Floodwaters followed he natural path and inundated whatever came in their way. Restoration of wetlands, water bodies, and  the removal of encroachments in the flood spill channels should be high on the list of the state government.

In J&K, the Irrigation and Flood Control department has no power over Lakes, Waterways and the Wullur Lake as these come under separate authorities. Coordination and decision making was difficult during the 2014 floods. As all the lakes, water bodies and the river are integrated, there needed to be swift coordinated response by Irrigation and Flood Control Department. Instead it was delayed.  Control of all the water bodies/lakes and wetlands in the Jhelum Basin needs to be brought under one regulatory authority for their integrated management, being a single catchment area served by the same wetland. Maharashtra created such an authority some years ago for this purpose and has now an integrated and cohesive policy.

Revision of the existing land use policy and building codes is required along with strict enforcement and implementation to minimize human and economic loss. Urban planning is going to be a challenge for the Srinagar Development Authority, in the light of last year’s floods. Should horizontal development of Srinagar stop? Land for housing is scarce, as a result people have built houses on wetlands.

Among the issues that were discussed by  experts after the floods was the question of whether  the railway line obstructed the floodwaters, thus making Srinagar more vulnerable. Proper studies will have to be undertaken to find out the truth and suggest remedies for the future. This also raises the question of the urgent need to have an environmental impact assessment of all existing and future developmental projects to ensure minimum loss of public properties, livelihoods of people and the infrastructure.

As people and communities are almost the first respondents in any natural disaster, comprehensive community-based disaster risk reduction plans need to be prepared at the district level on priority and communities given training on how to handle such emergencies. Several Indian states already have such trained community response teams.

For several years, the J&K government’s proposal for the construction of an alternative flood channel has been pending before the Central government. Following the floods, there has been a loud public demand that this be undertaken urgently. This involves massive expenditure. Although the experts had supported it, there is new evidence that is making it necessary to have a relook at this proposal. Academics have been continuously doing studies since the floods bringing out new facts. According to some expert observations, there is evidence to show that the floodwaters from Srinagar were not moving towards Wullar Lake as should have naturally happened. Further studies are needed to determine the causes for this – if it is true – and more so to make Srinagar less vulnerable.

All this makes it abundantly clear that knowledge-driven,  all-inclusive multidisciplinary flood planning needs to be initiated on a priority by engaging technocrats with relevant expertise to develop insights into flooding mechanisms in the Jhelum Basin building on comprehensive existing studies and last year’s experience.

Sushoba Barve is the Executive Director of Centre for Dialogue and Reconciliation. These findings were discussed at a seminar on the subject held by CDR.