Kerala Leads in Female Literacy, While Tamil Nadu Has Most Women Entrepreneurs

But female participation in India’s workforce has declined from 34% in 1999 to 27% in 2014, making it the worst rate among BRICS nations. 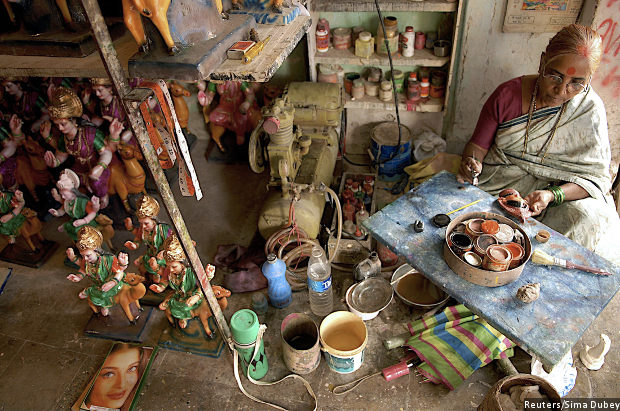 An artisan paints the idols of Hindu gods and goddesses at a workshop in Mumbai. The five states with the largest proportion of literate women –Tamil Nadu, Kerala, Andhra Pradesh, West Bengal and Maharashtra–account for 53% of all business establishments owned by women nationwide. Credit: Sima Dubey/Reuters

The five states with the largest proportion of literate women – Tamil Nadu, Kerala, Andhra Pradesh, West Bengal and Maharashtra – account for 53% (4.3 million) of all business establishments owned by women nationwide, although no more than 33% of India’s women live in these states, according to an IndiaSpend analysis of data released by the Economic Census 2012.

With 73.4% of its women literate, Tamil Nadu – third among the larger states after Kerala and Maharashtra – has India’s largest number of establishments run by women, one million, according to the 2012 census.

Tamil Nadu is followed by Kerala – which has 90% female literacy, India’s highest rate – which accounts for 11% of the businesses run by women.

While the female literacy rate was 65.5% nationwide, the female work-force participation was 25.5%, according to the 2011 census. The five states with the largest number of women entrepreneurs also have higher-than-national average literacy among women.

Lack of financial education can also limit women from gaining access to and benefitting from financial services, according to this 2014 World Bank report.

Bihar, for example, has 153,610 establishments run by women (accounting for 1.9% of businesswomen and ranked 14th among states) and only 56% women have completed ten years of education.

Women own/run 8.05 million of India’s 58.5 million establishments (13.7%), IndiaSpend reported in May 2016, providing employment to 13.4 million people. About 89% of these were employed in establishments hiring less than 10 workers.

Building a small business, step by step: a woman’s story

Archana Angre (43), who runs a tiffin service and a small restaurant in Chembur, an eastern suburb of Mumbai, studied till class nine.

Angre started the business in 1997 when she worked as a cook, despite opposition from her in-laws who warned her that business was risky.

The initial investment of Rs 2,000 was done by Angre and her husband Ashok Arjun Angre. She employed three family members (daughter, son and husband) in the beginning.

Within a year of starting business, Angre received help from patrons who helped her with capital and equipment (gas cylinders and stove). Within two years, her business increased from 10 tiffins to 100 tiffins.

Some of Angre’s clients helped her get a loan of Rs 50,000 from UCO Bank. The business expanded from making tiffins for office-goers to preparing meals for parties and company events.

She received a loan of Rs 2,95,000 under the Pradhan Mantri Rozgar Yojana (Prime Minister’s Employment Programme) in 2010, which she used to buy utensils and other items required for the business.

Angre is now planning to open a fully functional restaurant. She has also been able to fund her daughter’s studies in hotel management.

“There is a need for change in attitude from being safe with a job to the ability to take risks to start a business,” Angre said.

This article originally appeared on IndiaSpend.