India's gross savings rate is estimated to have fallen to below 30% of GDP in the fiscal year ended March, from over 32% before the pandemic. 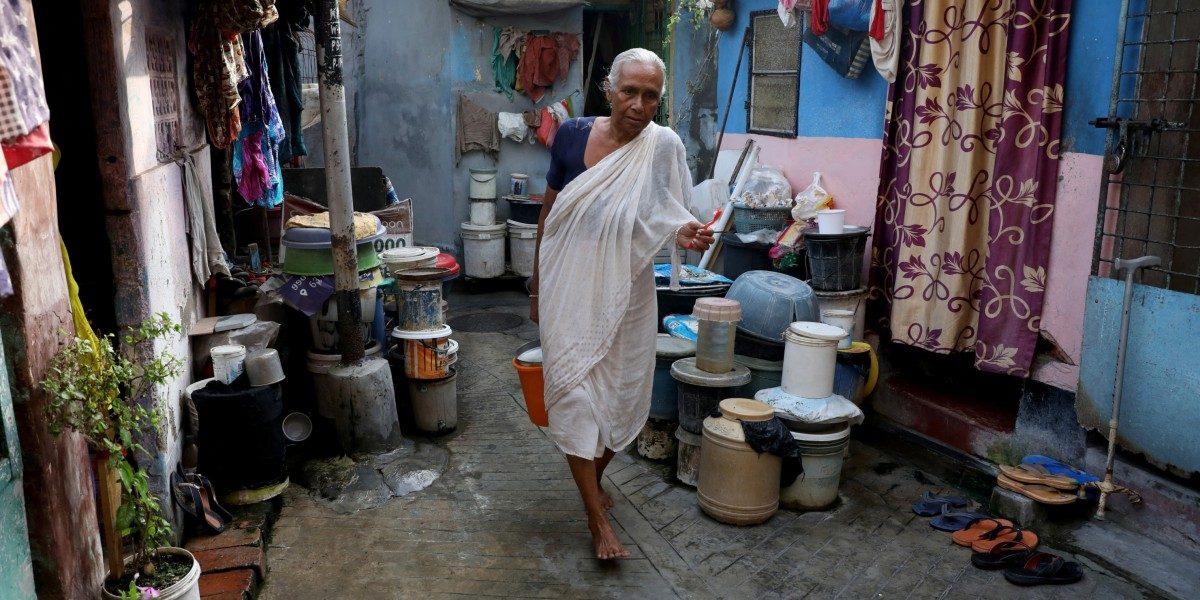 Gita Sen, 70, a widow of a daily wager, who gets an allowance of 1000 rupees from the state government, carries a container with drinking water from a municipal tap outside her rented one-room, in a slum in Kolkata, India, May 23, 2022. REUTERS/Rupak De Chowdhuri

But with India’s living costs soaring, he is now forced to dip into his savings and will need to keep working longer just to pay for medicine, travel and household expenses.

“I can’t even think about retired life”, he told Reuters at a postal bank, where he had come to withdraw funds.

Wali has cut back on fruit, eating out and visits to relatives. He estimates his income is now less than half what it was before COVID-19 struck, with clients unable to pay what they did before the pandemic and his savings yielding less interest in inflation-adjusted terms.

While better off than many his age, inflation has forced Wali and millions of other elderly Indians to make tough choices.

Sharply rising prices are hitting older people the world over as global supply problems caused by the pandemic – and made worse by the Ukraine war – propel food and fuel costs higher.

In India, meagre state pensions mean only a minority of retirees can afford proper healthcare with nearly 15 million of those aged 60 and above – around 10% of the total – nearly homeless.

India’s headline inflation hit an eight-year high of 7.79% in April. 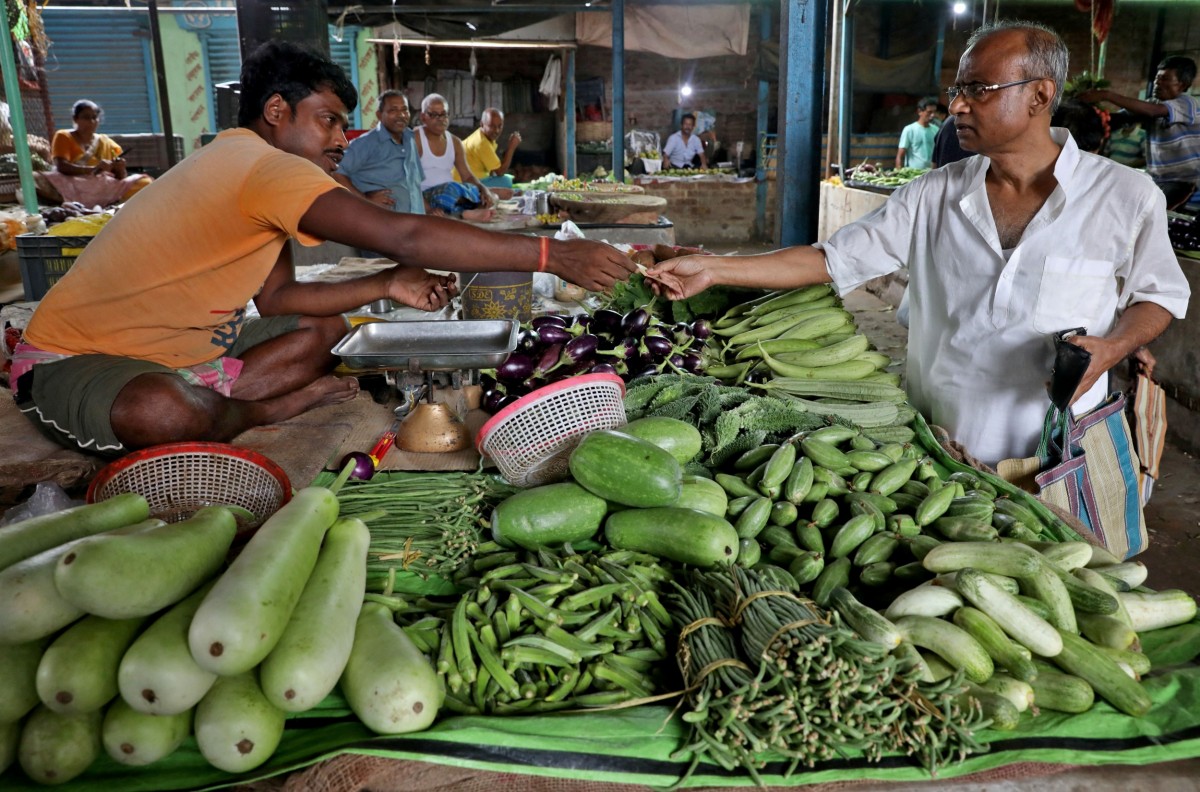 Nikhil Kumar Mondal, 65, a retired school headmaster, buys vegetables from a vendor at a market on the outskirts of Kolkata, India, May 20, 2022. Photo: Reuters/Rupak De Chowdhuri

Food items, which account for nearly half of the consumer price index, have jumped, with wheat, edible oil, vegetables, fruits, meat and tea up by between 10% and 25% in a year. Cooking gas and petrol prices climbed more than 40%.

“Inflation is the biggest blow to older people”, said Anupama Datta, director at the HelpAge India charity, which estimates that nearly 90 million of 138 million people aged 60 years or more are working in order to earn enough to live on.

Many Indian pensioners rely on savings built over decades for their retirement.

There are no official estimates but pensioners’ associations said many they represent are now forced to draw more from those accounts than previously.

India’s gross savings rate is estimated to have fallen to below 30% of GDP in the fiscal year ended March, from over 32% before the pandemic. Economists do not expect that to change next year.

Average interest rates on long-term deposits have also fallen to 6% from 8.5% over the past three years, taking it below headline inflation.

Some pensioners have switched to riskier investments, including equities and mutual funds, but after two good years of returns even stocks are now struggling with the benchmark index down over 6% this year. 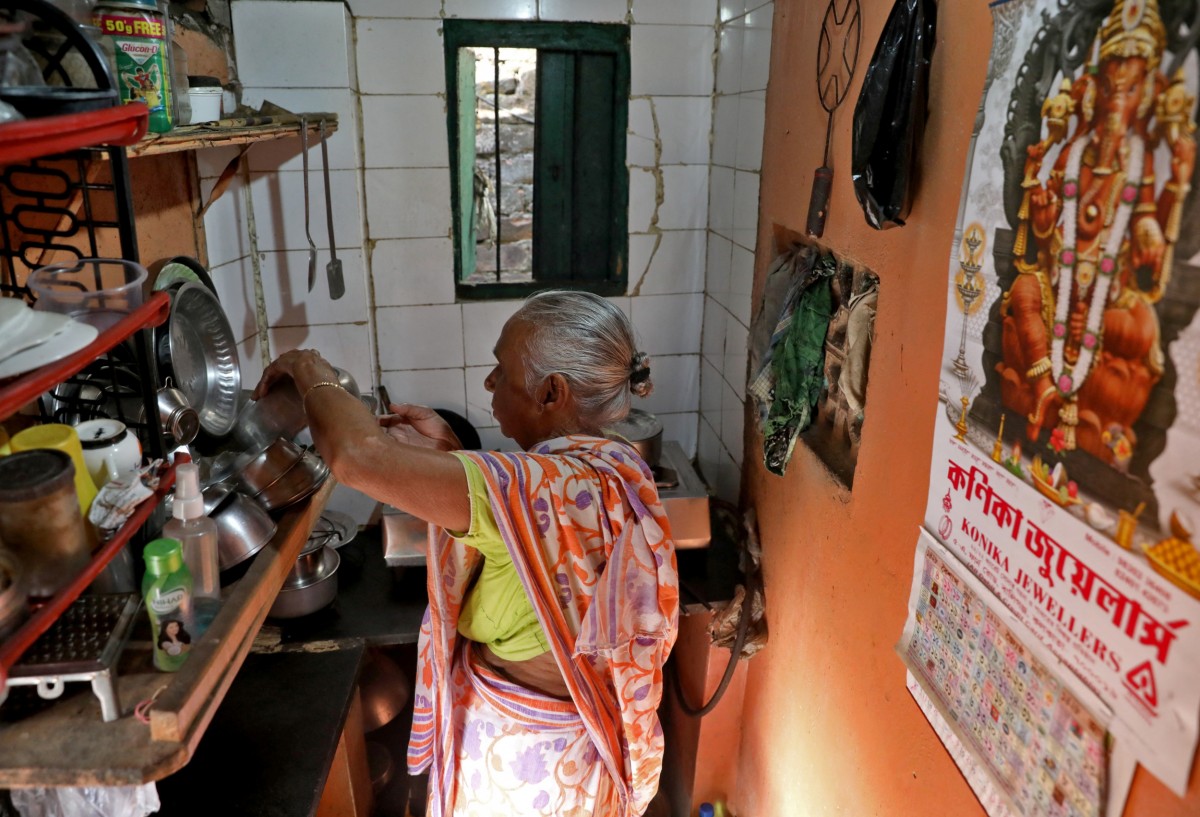 Gita Sen, 70, a widow of a daily wager, who gets an allowance of 1000 rupees from the state government, prepares her morning tea inside her rented one-room, in a slum in Kolkata, India, May 23, 2022. Photo: Reuters/Rupak De Chowdhuri

Gopal Krishna Agarwal, the BJP’s economic affairs spokesman, said the government was doing all it could to protect them, including through food and healthcare support.

It already provides free food grain to nearly 800 million people as a part of its pandemic relief programme.

Over the weekend the government announced tax changes and subsidies that will lower prices of gasoline, diesel and cooking gas.

But it is not clear how much relief that will bring. State pensions are just 200 Indian rupees ($2.58) a month, although some states provide up to between 1,000-2,000 rupees monthly.

In the eastern city of Kolkata, Gita Sen, a 70-year-old widow of a labourer, said she could not afford even two meals a day on her 1,000 rupee monthly pension.

“Often I have to borrow or beg neighbours for food”, she said in front of her rented one-room home in a slum.

Unlike advanced economies, India has very few aged-care homes. Most retirees depend on families for support, putting extra strain on children whose livelihoods have been impacted by the pandemic and now inflation.

There were just 1,100 old age homes across the country catering to about 100,000 people before COVID-19 struck, according to a study by Tata Trusts, the charitable arm of the Tata Group conglomerate.

Largely run on private donations, they face their own challenges as costs soar. Increases in food, medicine and energy costs mean these homes have less to spend on vegetables, fruit, drugs and care providers.

Saurabh Bhagat, director at SHEOWS, a Delhi-based charity that runs three such homes catering to more than 400 people, said monthly expenses had recently gone up by nearly 20%.

“We can’t think about buying fruit any more, and have cut down expenses on food supplements that is delaying the recovery of sick people at our old age homes”, Bhagat said.

He added that the homes he runs were bringing in 30-40 elderly people a month off Delhi’s streets who had been abandoned by their families, almost triple last year’s rate.

Basanti Chand, 61, a resident at one of the SHEOWS homes, said she had been abandoned by her family, even though she had spent everything from her savings to make ends meet.

She had sold off her small house earlier in order to pay the dowries of four daughters.

“I would not have survived today if the home had not given me shelter”, she said, wiping tears from her eyes. Chand did not blame her children.

“I can’t think anything bad about them. After all, they are my children… who have their own problems.”