Can Ola and Uber Fit Into an Ideal Public-Private Transport System?

The costs that Ola and Uber inflict on the financial and physical health of their driver-owners, road space and safety and city transport infrastructure are too significant to be left to Silicon Valley-based venture capitalists. 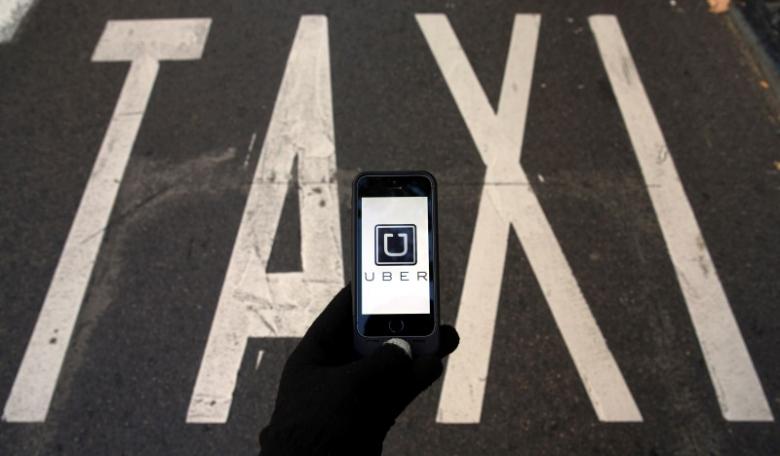 The logo of car-sharing service app Uber on a smartphone over a reserved lane for taxis in a street is seen in this photo illustration taken December 10, 2014. Credit: Reuters/Sergio Perez/Illustration/Files

There is despair and anger on the roads of large metros in India. Even though the strike by hundreds of thousands of drivers of app-based cab service providers Ola and Uber was called off by February end, the frustration and sense of betrayal persists. This is likely to continue as these drivers are faced with political and economic forces much beyond their imagination. They are owners of capital (their vehicles). And yet, the embrace of global capital, which they hoped would help them leapfrog over class inequalities, has landed them in a trap.

App-based taxi services are a clever use of the modern smartphone coupled with blazing fast mobile internet access. Their success, world over, is generally attributed to providing a better service in comparison to old-style taxi services. This perception is true, but also leaves out the crucial role played by the neoliberal political economy. The defining markers of the latter are first, an utter reluctance by the state to regulate the sphere of emerging social relations, and second, the push towards a debt-based economy to keep the game of finance capital rolling.

Mobility is the key to life in any city. High commuter density allows for the viability of a publicly-available, but privately-owned and used transport. However, it was realised early that regulation of this mode of transport is essential. Too few taxis would not create the assurance a commuter needs to use them regularly; too many would only clog the roads, defeating their very purpose.

Fares too needed regulation as price discovery in the classic sense was not an option. Transactional friction due to haggling, or waiting till the right price is arrived at, is not worth the time, for either commuters or drivers. In India, the contrast between a regulated taxi service, like the three-wheeler autos in Mumbai, and an unregulated one, as in Delhi, is immediately obvious to any commuter. The latter is not only notorious for bad service, it is also very inefficient in terms of resource use measured as the ratio of time an auto has a commuter to the time it is on road.

App-based cab services primarily use lacunae in existing regulatory frameworks for a number of reasons.

City transport regulation in India distinguishes between a vehicle that can be hailed anywhere from a public space – the black and yellow taxis and autos – and commercial vehicles which can be hired for point to point services, such as chartered vehicles. The number and fare for the former are strictly regulated, while no such regulations exist for the latter. App-based cab services like Uber and Ola, even while formally a chartered transport service, are also a little like old-fashioned taxi services. The easy slide from the sphere of private interactions, between cab aggregators and driver-owners, and between drivers and commuters, to a public sphere of hundreds of thousands of vehicles and commuters on public roads, is quickly achieved with the help of technology.

A remarkable feature of neoliberal governance is that even while an increasingly larger part of social life is mediated through digital technologies and the internet, little thought and effort is being given to understand its implications for public life, and for bringing any necessary regulation. Some operations of app-based companies are actually in violation of existing regulations. Reportedly, Uber in the US has been using a special computer programme to avoid getting caught in sting operations by authorities in cities where it is not allowed to operate. In June 2015, the transport minister of Delhi claimed that 80% of cabs registered with Ola and Uber were violating existing rules. It is interesting that this claim was made on the basis of data provided by these companies themselves, as the government did not have any data of its own.

The strike by Uber and Ola during February reveals the sharing economy’s ugly skeletons, but also represents an opportunity for us to ask searching questions.

What sort of public-private transportation system do we want in India’s cities and how should Uber and Ola fit into this?

A reasonable calculation shows that a driver-owner registered with these companies driving for 8000 km/per month incurs expenses of about Rs 57,000. Clearly, with fare rates as low as Rs 6 per km, and service commission to companies, there are times when driver would be using their vehicles and working for a loss. Companies get driver-owners on the road through an elaborate and complex system of ‘incentives’. In reality, incentives are the only real source of income for driver-owners. For companies, incentives provide a very flexible control mechanism without any long-term commitment. Incentives are kept high even at the cost of incurring losses when companies need to expand the pool of registered drivers to establish themselves in an expanding market or when they are trying to out-compete business rivals. These are slashed when a company needs to cut cost. For regular operations, incentives are the tool that controls when, where and how long drivers are on road.

Operations of app-based cab service providers in India are primarily funded by venture capitalists looking for long term profits. Capturing, creating and monopolising the commuter market, while temporarily creating a large body of attached driver-owners, is integral to these long term interests.

To secure their ‘supply side’ with attached driver-owners, tie-ups are made with lending agencies, which have their own interest in pushing credit. Just a few months ago in Delhi, before the strikes erupted, block SMSs were still being sent out to drivers, assuring them of a brand new car with down payment of as low as Rs 20,000. Companies were announcing additional incentives to already registered driver-owners to get more drivers known to them registered.

According to an Economic Times report, car sales for app-based cab services are expected to be 1,25,000 in 2017, while in 2015 these were 70,000; an increase of 70% in two years. Financial services companies and lenders have their own interest in pushing auto loans. One calculation points out that these loans still give a return of 1.5% amid a generally gloomy lending scenario.

Once the supply side is assured, app-based cab operators counter competition from existing cab services by offering low fares. These also create new, dependent commuters. The game is carried on with capital pumped in from outside. Ola, the largest app cab service in India, which enjoys 40% market, has been funded by up to 1.3 billion dollars by foreign investors. Uber is claimed to have set apart 1 billion dollars specifically for India. As competition with the US-based Uber heated up, Ola’s CEO in December, 2016 publicly requested the Indian government to go the ‘China way’, where domestic regulations are brought in to favour Chinese online taxi aggregators. His words are revealing. “What’s happening .. (is that) there is narrative of innovation that non-Indian companies espouse but the real fight is on capital, not innovation. The markets are being distorted by capital.” Seemingly espousing the cause of Indian start ups, he further added, “It’s much easier for non-Indian companies to raise capital because they have profitable markets elsewhere. You might call it capital dumping, predatory pricing or anti-WTO but it’s a very unfair playing field for Indian startups.” The irony of his arguments in favour of national capital is that Ola itself is 80% owned by foreign investors.

‘Markets being distorted by capital’ is a fair characterisation of the online taxi market in India. The debt financed model of increasing the number of attached drivers is precarious for the very health of these companies. Also, any drying up of investor interest will jeopardise the app based urban commute on which large number of people have come to depend.

Given that the number of vehicles on a given road area is a matter of general public interest, it makes no sense for regulators to let their numbers be determined purely by where in their business cycle these companies believe themselves to be in, whether they are increasing incentives to get more drivers to cut competition, or slashing incentives to take them off the road. Their number is also crucial to check vehicular pollution. So far the odd-even schemes of the Delhi government have not barred any commercial vehicle; and there is speculation that while private vehicles were off the road during two week long campaigns last year, app-based cabs did roaring business. Another issue requiring urgent regulation is road safety. An app-based cab driver is required to continuously divide his/her attention between the road, attending to calls from perspective commuters, instructions from the cab operators, besides reading maps through GPS. Furthermore, these drivers are on the road for long hours. A serious assessment is needed to check if the set of activities an app-based driver is required to do fall within limits of road safety expected from a commercial driver.

The class exclusive character of the urban transport infrastructure required for private vehicles is another issue of public interest. Public transport versus private vehicles is the old class contradiction of city commute. City transport planning under neoliberal hegemony has simply squeezed out the working poor, and is investing heavily on the special requirements of the propertied. A flyover has no space for pedestrians; it is of no use to non-motorised vehicles and public transport. Elevated corridors take the exclusion of these modes a step further. After the flyover binge, large metros in India are going in for elevated corridors. It started with the eleven-kilometre long P.V. Narsimha Rao corridor in Hyderabad, built mainly to connect the new private airport south of the city to the posh areas in the centre. Bangalore, Mumbai and Delhi are quickly following suit. Delhi already has about fifteen kilometres of elevated corridors, 50 more kilometres are in pipeline. Elevated corridors are expensive; 500 buses for public transport can be bought with the Rs 100 crore needed for one km of an elevated corridor. Delhi at present has only one third of the buses needed for its 15 million citizens. Bereft of a reliable public transport, the transport ecosystem of the working poor here is made up of rickety three wheeled tempos under ‘Grameen Seva’ (rural service), the name being an apt reminder of its symbolic exclusion from the city, and battery run e-rickshaws built from Chinese kits. Both these have come up and survive without any state support. Clearly, without publicly-funded, class-exclusive expensive infrastructure, the large number of app-based cabs will not be an attractive proposition.

The new communication technology is here to stay and, barring a few high density city centres, days of publicly-hailed old-style taxis are numbered. However, despite exaggerated claims of companies and some of their enthusiastic consumers, app-based cab services are not just a touch away. Their cost to the financial and physical health of driver-owners, road space and safety, and city transport infrastructure are too significant to be left to the half-baked business models of venture capitalists. It is high time public authorities intervene and regulate this new form of city commute. Once suitable regulations are in place, that would also open up opportunities for newer forms of organisations, like cooperatives of driver owners to provide app-based cab services.