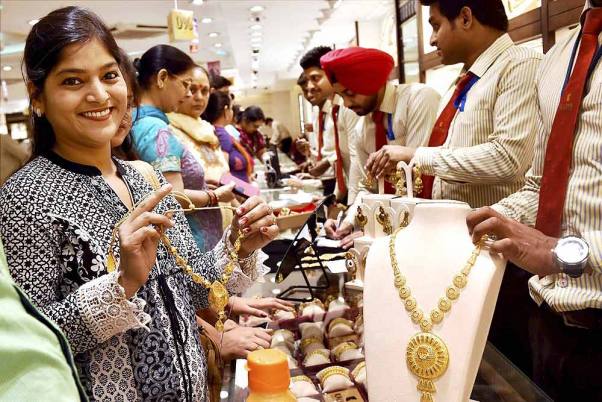 A woman tries a gold necklace in a shop on the occasion of Akshaya Tritiya in New Delhi. Photo: PTI

Mumbai: According to a World Gold Council (WGC) report, demand for gold in India plunged by 70% during the April-June quarter to 63.7 tonnes compared to the same period last year. This decline has been attributed to the nationwide lockdown which was imposed to prevent the spread of COVID-19 and a surge in prices.

Overall gold demand in the country was 213.2 tonnes during the second quarter of 2019, WGC said in its ‘Q2 Gold Demand Trends’ report.

Jewellery demand, in value terms, fell by 63% during April-June this year at Rs 18,350 crore from Rs 49,380 crore in the corresponding period last year.

Total investment demand for Q2 2020 declined by 56% to 19.8 tonnes during the quarter under review against 44.5 tonnes last year.

In value terms, gold investment demand during the second quarter witnessed a dip of 37% at Rs 8,250 crore from Rs 13,040 crore.

Moreover, total gold recycled in the country saw a decline of 64% during the April-June quarter at 13.8 tonnes from 37.9 tonnes in Q2 of 2019 as refineries were closed due to the nationwide lockdown.

The second quarter of 2020 was defined by lockdowns and high prices, due to which India’s gold demand reached a record low at 63.7 tonnes, down by 70%, WGC Managing Director, India, Somasundaram PR said.

Sales trend during the window of opportunity, afforded by relaxation of lockdown in select cities, do point to healthy latent demand that should surface once Covid-19 turbulence is behind us, he added.

He said that the demand for jewellery dropped by 74% to 44 tonnes, in an atmosphere of fear and uncertainty where weddings were postponed or just turned out to be uncharacteristically quiet and private.

Naturally, online buying convenience played a significant part in consumer behaviour during the lockdown, as we saw gold exchange-traded funds (ETFs) grow after being dormant for many years, he noted.

Digital gold saw significant activity, though volumes are yet negligible in the overall demand scenario, he said adding that logistical issues and poor demand crashed imports by 95%, to a mere 11.6 tonnes.

Overall, gold demand in India in H1 2020 was 165.6 tonnes, plummeting by 56%  in comparison to H1 2019, despite marginal increase of gold ETF buying in keeping with global trends, he stated.

Going forward, he said, India’s Covid-19 journey in H2 will chart the course and pace of economic revival of which gold demand is an integral part.

A sense of optimism is developing amongst trade, however, that, by Dhanteras, Covid-19-related disruptions may matter less as society learns to live with it, with a possible upside following some positive news on treatment.

This should spur consumer confidence, and jewellery demand will play a big role in bringing things to normalcy. Fast-rising gold prices could act as headwinds though, he added.

The price is currently a life-time high of over Rs 50,000 per 10 grams, a key milestone and response is naturally mixed with content investors and wary consumers and to put it in perspective, gold prices have risen by 60% since January 2019 and 20% since January 2020, income growth or expectation have not kept pace with this, Somasundaram said.

As we are still in the midst of the crisis without clear sight of many variables on consumer behaviour, prices or length of the disruption, we will not be able to quantify the impact on the full-year gold demand in India, he added.