Once Regarded as a Sunrise Industry, Indian Telecom Now Struggles for Survival

Reeling from a price war and allegations of regulatory bias, the sector now remains optimistic that a recent increase in tariffs won't take the sheen off data consumption. 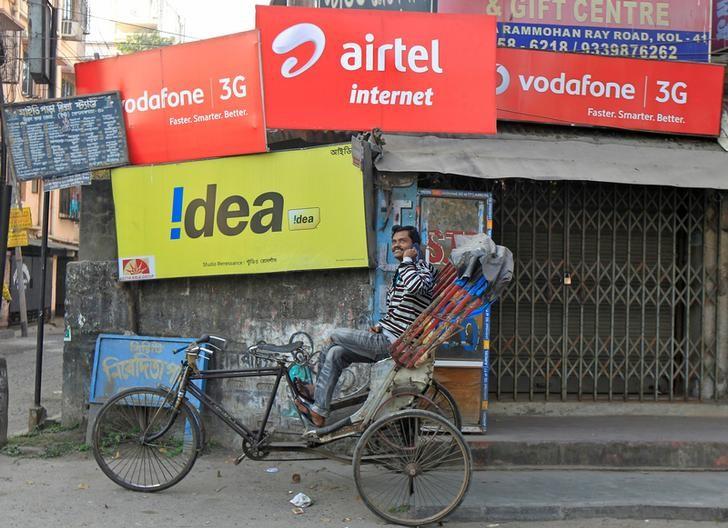 A rickshaw puller speaks on his mobile phone as he waits for customers in front of advertisement billboards belonging to telecom companies in Kolkata, February 3, 2014. Photo: Reuters/Rupak De Chowdhuri/Files

From being the world’s cheapest and fastest growing market, India’s telecom sector is sputtering as it faces life-threatening liability running into billions of dollars, a crisis that may alter the character of an industry that has already seen a painful price war destroying profits and push several operators out of the market.

The Supreme Court order for including non-core revenue in telecom groups’ gross adjusted revenue — the figure on which the levies are charged — revived the rivalry between the old operators and Mukesh Ambani’s low-cost upstart Reliance Jio during 2019, but there are signs of a truce with the rival camps agreeing to raise tariffs and also favouring regulator’s intervention in fixing floor or minimum tariffs.

“We have fundamentally gone from an all (mobile) voice (calling) network to a hybrid network (of voice and internet data), to soon an all data network,” said Rajan Mathews, Director General of Cellular Operators’ Association of India (COAI).

And to survive, a floor price is needed quickly, before March 2020, he told PTI.

With 1 gigabyte (GB) of mobile data costing just $0.26 compared to $12.37 in the US and $6.66 in the UK, India in 2019 emerged as the nation with the cheapest telecom tariff in the world. It was also the fastest-growing telecom market.

But below the surface, a price war since the 2016 launch of Jio had ringed the sector hallow. And when on October 24, the Supreme Court, on a petition moved by the government, ordered payment of past dues according to its new definition of AGR, the country’s second-biggest carrier Vodafone-Idea Ltd warned of shut down if no relief is given.

The total dues for the industry ran into a whopping Rs 1.47 lakh crore.

For an industry that has come from 7-8 operators to just three private players and state-owned fourth operator, the warning by Vodafone-Idea sounded like a death knell.

The year saw resurfacing of a bitter war of words between the old and the new operator, and intense lobbying by telecom czar Sunil Bharti Mittal and billionaire Kumar Mangalam Birla of Vodafone-Idea.

Mittal and Birla had faced the brunt of brute competition unleashed by Ambani, as Jio ate into their user base and quickly grew to become the nation’s biggest operator in terms of subscribers.

Airtel and Voda-Idea reported record financial losses but Jio continued to surprise the markets with astonishing profits through the year.

The representations to the government, worked. The government announced a two-year deferment on spectrum payments for the stressed telecom companies as it worked to avoid the sector becoming a monopoly, soon after the three operators signalled the end of price war by raising tariffs.

Mittal lobbied for regulator prescribing for a floor tariff for industry viability – an idea Jio had initially opposed on grounds that it would tantamount of giving up industry right of forbearance, Telecom Regulatory Authority of India (Trai) quickly moved in to float consultation paper to fixing minimum rates.

COAI – the association that represents Airtel and other operators – wants the regulator to bring floor prices for data at the earliest, before March, arguing that mature mobile market merits such safeguards for investors.

And shocking loss numbers only led the telecom industry to seek doing away with the “obsolete mechanism” of AGR, in the best-case scenario, and if not, certainly a redefinition.

The industry is also pinning its hopes on fixation of floor price by the regulator to put an end to the sustained haemorrhaging of players and has also urged the Finance Ministry to substantially cut levies to give the industry a fighting chance.

The industry body remains optimistic that a recent increase in tariffs won’t take the sheen off data consumption; the hunger for data will increase as more and more Indians transact online, buy clothes and indulge in online shopping and simply binge-watch the latest shows on video-streaming platforms. Greater speeds, smarter phones would aid that process, it argues.

“Still, the floor price is certainly needed to bring certain discipline back into the marketplace. We have fundamentally gone from an all voice network to a hybrid network, to soon an all data network. In a voice network, the de facto floor was the interconnect charge, question is, in the new world of data what should it be,” Mathews said.

Mittal, whose company is in the midst of $3 billion dollar fund raising to help pay off AGR dues, has sought TRAI’s urgent intervention in the telecom sector saying, “We are unnecessarily killing this industry in a manner and way that is not conducive…”

He underlined the need for a balance between protecting investments and consumer interest.

Airtel posted a staggering Rs 23,045 crore net loss for the second quarter ended September 30, due to provisioning of Rs 28,450 crore in the aftermath of the SC ruling on statutory dues.

Both Airtel and Vodafone Idea have petitioned the government for relief in waiver of interest and penalty, which will halve the dues, and also filed a review petition in the Supreme Court.

The year, however, brought cheer to state-owned telecom companies MTNL and BSNL. The government recently approved a plum Rs 69,000 crore revival package for the two telcos that were in news over delay in salary payment for the most part of the year.

The revival package includes merging the two loss-making firms, monetizing their assets and giving VRS to employees so that the combined entity turns profitable in two years.

Nearly 92,700 employees of BSNL and MTNL have opted for voluntary retirement, which is expected to save about Rs 8,800 crore annually in salary bills for the debt-laden telecom companies.