New Delhi shouldn’t ignore the interests of developing economies over worries that the funds may be used for ‘extraneous reasons’.

The global economy is in the grip of an unprecedented crisis, once never experienced before in its history. The virus pandemic has yet to run its course in most countries, but meanwhile, the containment measures – which have involved major restrictions on mobility, gatherings and economic activity – have already imposed a massive economic cost.

The restrictions and closures have meant simultaneous attacks on demand and supply – a uniquely terrible combination that has created a situation in which conventional policies simply will not suffice. World economic output will most definitely fall this year, possibly much more than the 3% optimistically projected by the IMF. Employment levels have collapsed and open unemployment has increased massively, while those in self-employment have seen their remuneration dwindle to almost nothing.

The worst declines are being experienced in developing countries, even before the pandemic has really hit them. Most developing countries (including those emerging markets apart from China that were earlier touted as the major beneficiaries of globalisation) are being hit by a perfect storm of declining export and tourism revenues, sharp outflows of capital, severe reductions in bond prices and increases in bond yields, major currency depreciations and increasing difficulties in servicing external debt. These external headwinds are adding to the domestic fiscal pressures created by collapsing state revenues.

In advanced economies, macroeconomic policy responses have been swift and large, with public spending increases anywhere between 5% and 20% of GDP and monetary/financial policies that further enable economic activity to revive. But developing countries facing such a severe balance of payment constraints simply cannot afford to undertake such measures, not only because of fears of capital flight but because they lack the ability even to finance necessary imports.

This will obviously lead to humanitarian catastrophe in these countries, which account for the majority of the world’s population, but also this bodes ill for the world economy as a whole, as it would delay or prevent an eventual recovery.

Three measures are immediately required to prevent even more precipitate decline in economic activity in the developing world: a moratorium on debt payments for at least six months, possibly a year; imposition of capital controls to prevent further capital flight that is causing currency depreciation and collapsing asset prices; and a large issue of new liquidity by the IMF, in the form of Special Drawing Rights (SDRs).

Of these, the third is in some ways the easiest to do immediately. SDRs are supplementary reserve assets (determined as a weighted basket of five major currencies) issued by the IMF, which has the power just to create this additional international liquidity at no extra cost, and new allocations are not in the form of debt.

Since a fresh issue of SDRs must be distributed according to each country’s quota in the IMF, it cannot be discretionary and (unlike other loans by the IMF) cannot be subject to other kinds of conditionality or political pressure. At least 1 trillion SDRs could very easily be created and distributed. This would have a huge impact in ensuring that global international economic transactions simply do not seize up even after the lockdowns are lifted, and that developing countries in particular are able to engage in international trade. Advanced economies with international reserve currencies are much less likely to need to use them, but they can be a lifeline for emerging markets and developing economies, providing additional resources to fight both the pandemic and the economic disaster.

Also read: What Should India’s Package for Saving Small Businesses Look Like?

As it happens, this has been recognised by many global players, to the point that the IMF itself has called for new SDR issue. At the recent (virtual) G20 meeting and IMF spring meeting, the proposal to create and distribute an additional 500 billion worth of SDRs was mooted. But it did not take off because it was vetoed by at least two countries: the United States and India.

While the US position is reprehensible, it is no surprise given the Trump administration’s open embrace of “America first” policies that pay no heed to what happens to the rest of the world. As the holder of the world’s reserve currency, the US can undertake massive stimulus packages without concern for the external implications. And the US Federal Reserve can (and does) enter into swap arrangements with chosen countries, to prevent a global shortage of dollar liquidity. It suits the US government to provide this access only to certain countries, to maintain its own hegemonic position and to decide which countries it will favour or punish. 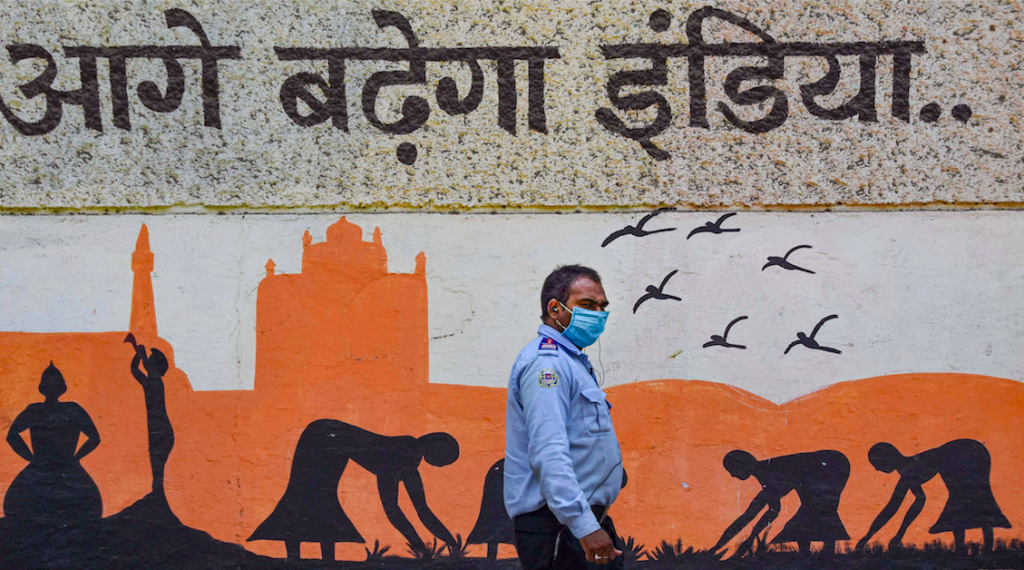 A man wearing a facemask walks past a graffiti during the nationwide lockdown in wake of the coronavirus pandemic, at Parel in Mumbai, Friday, April 17, 2020. Photo: PTI

But what of India? Why should New Delhi – which would in fact be a beneficiary of the SDR issue, providing access to debt-free foreign exchange reserves – oppose this move?

Two possibilities present themselves, both suggesting geopolitical rather than economic motivation. One is implicit in the phrasing of Finance Minister Nirmala Sitharaman’s statement that such a global liquidity boost by the IMF could produce potentially costly side-effects if countries used the funds for “extraneous” purposes. Extraneous purposes in the midst of a global economic collapse of historic proportions, when 102 countries have already approached the IMF for emergency funding just to meet their basic foreign exchange requirements?

What extraneous purposes could Sitharaman be referring to? One possible explanation is the Indian government’s fears that even in the midst of this complete economic breakdown the Pakistani government would choose to use such resources for terror funding or some such purpose. This may seem far-fetched to some, but is par for the course for the Narendra Modi government.

The other possibility is that India is merely trying to prove its loyalty to the Trump administration, and to indicate its willingness to jump on to the US lap in a geopolitical order where China looks increasingly likely to become stronger. India has already gone cap in hand with a request to access the US Fed’s currency swaps. It may be that refusing to allow SDR expansion was demanded as a quid pro quo; it could simply be overzealous attempts to indicate which side India is on.

Whatever may be the reason, this is a strategy that is not just fraught with risks but also illogical. Globally, it is a costly denial of a chance for the world economy to revive after this extraordinary shutdown. Internationally, it shows that India is willing to abandon the interest of the rest of the developing world, with little advantage to itself.

If it is only about Pakistan, it displays a level of small thinking that reflects poorly on any ambition towards becoming a leader of developing countries.  But in any case, any national strategist in India who seriously thinks that President Trump can be a stable and reliable ally, must have been asleep for the past three and a half years. In the Indian case, the Trump administration’s willingness to adopt blackmailing tactics has most recently been evident in the enforced supply of medicines that are sorely required in India to the US, and the blatant diversion to the US of medical equipment and testing kits from China that were allegedly originally destined for India.

Once again, the Modi government has shown that, in its urge to pursue its own dubious interest, it is capable of shooting the whole country in the foot, if not worse. In this case, its actions will have terrible consequences for the entire developing world.