The slowdown is three years in the making and will require higher liquidity and increased employment to pull us out of the quagmire. 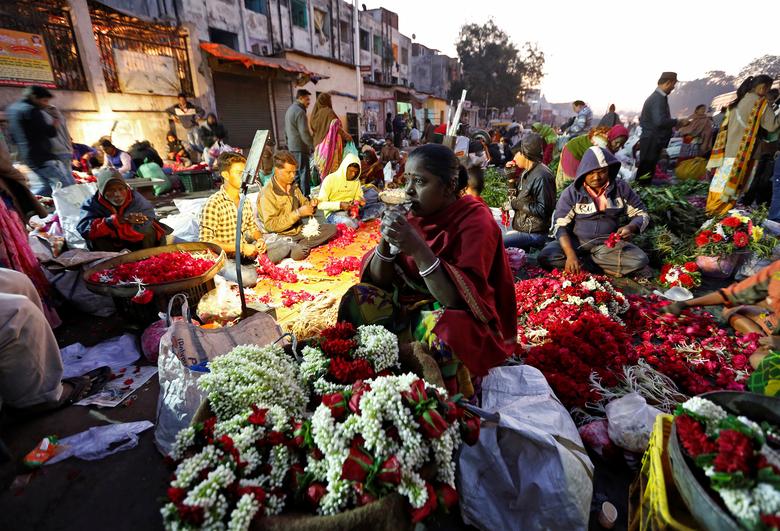 A vendor drinks water as she waits for customers at a roadside flower market in Ahmedabad, India, February 8, 2017. Photo: Reuters/Amit Dave

Stagflation, as defined by Princeton economist Alan S. Blinder, is “the simultaneous occurrence of economic stagnation and comparatively high rates of inflation”.

According to the National Statistical Office (NSO), the Consumer Food Price Index increased from 5.11% in September 2019 to 7.89% in October 2019. The retail price inflation rate reached an annual high at 4.62%. The government itself has admitted that growth has slowed. The recent NSO estimates of gross domestic product (GDP) for the second quarter of 2019-20 reported a further reduction in the growth rate of GDP to 4.5%, the lowest since 2012-13.

It is now irrefutable that India is in a growth recession. In my view, India continues to be in the grips of a stagflation that kicked in a couple of years ago.

Immediately after the Ministry of Statistics and Programme Implementation posted a record low in India’s retail price inflation (RPI) of 1.54% in June 2017, a pervasive, subterranean inflation kicked in with a big bang due to the introduction of the Goods and Services Tax. Coming on the heels of a liquidity crunch-induced recession, caused by demonetisation, this has perhaps tipped the Indian economy into an episode of stagflation.

Paradoxically, this state of affairs was the unwanted outcome of the noble and well-meaning intentions of the NDA government to increase economic growth and wealth.

The stage was set with demonetisation. Like most Indians who want a progressive and corruption-free India, I am all for transparency and accountability. I support efforts and policies to enhance tax compliance, and to eradicate black money. There’s a critical rider though: interpositions to erase black money need to account for multiple complexities, including the reality that black money, when in local circulation, supports trade and therefore is a positive money multiplier. The money multiplier does not distinguish between black and white money in circulation; the economy is not a zero-sum game.

Black money has fundamentally different relationships with economic growth and govt revenue. Black money, when spent, increases demand and therefore GDP. It can thus be an agent of growth. The fact that black money may not increase, or may even reduce, government revenue is an entirely different matter.

While demonetisation aimed to reduce black money, it caused tremendous collateral damage. With radical demonetisation on November 8, 2016, 86% of the currency in circulation was withdrawn from the system overnight. Not only did this cause loss of livelihood and business for far too many individuals, businesses and markets, the lack of liquidity also had an exponential, ripple negative money multiplier effect. Reduced liquidity led to reduced demand and recession, and to compound matters, the introduction of the GST, a few months later, completely disrupted market equilibrium and sent the economy into a downward spiral.

Demonetisation had aimed to ferret out black money, typically lodged in crores of bundles of notes of Rs 500 and Rs 1,000. Prior to demonetisation, a highly significant proportion of all markets in India thrived on these very cash bundles (whether of black or white money), with many buyers and sellers conveniently opting not to pay direct or indirect tax.

I would like to illustrate how this worked with my own experience. While shopping in wholesale markets in Delhi – for household furniture and fixtures for the MP’s bungalow my husband Vinod was allotted when he won his 4th Lok Sabha election in 2014 – I experienced two phenomena.

If I made payments in cash, every shopkeeper, without exception, considered the transaction done when the goods were handed over to me.

On my asking for an invoice, the shopkeeper would give me a rough list of items purchased, with their prices. On my insisting for an official invoice, the perplexed shopkeeper would explain that if he did that I would have to pay more because I’d have to pay sales tax. On opting to pay the tax, the seller’s wry grin said it all. When I wanted to pay by card, every shopkeeper, without exception, cautioned me that I would then have to pay tax on my purchase. Evidently, at the time, paying sales tax was the exception rather than the rule, with a saving of about 15% to the buyer, and increased income to the seller. The introduction of GST sought to stop this tax evasion.

Before GST, for a substantial proportion of sales, the effective equilibrium market price of goods and services was the price of goods without the legal applicable taxes. It was this lower “illegal” market price that established the demand quantity for the market. As per classic microeconomic theory, at a higher price, there was bound to be a contraction in demand.

When GST was introduced with an excellent system of enforceable end-to-end tracking, evasion of indirect taxes was curtailed. With a system that enforced significantly higher tax compliance, the effective market prices of practically all goods increased, by the amount of applicable GST, with no corresponding increases in demand whatsoever. The demonetisation currency crunch had, in fact, already reduced demand. And thus India was in a classic stagflation. Because effective prices of goods and services increased due to increased tax compliance it was possible that the inflation in the economy was missed in calculations of RPI.

The complexities and delays in implementing GST, with excruciation time-lags in releasing refunds that were due, effectively withdrew working capital from running enterprises and stretched an already distressed economy.

So while the NDA government had the best of intentions, demonetisation and GST both had a negative impact. On a personal note, my larger issue with demonetisation is that you cannot clean or reform the system selectively. To cleanse the system of black money the government also has to ensure that every election is fought in the spirit and letter of the law as stipulated in the Election Commission’s Code of Conduct. Selective oversight, and self-serving arguments of “Saam, Daam, Dand, Bhed”, will not do. The ends, particularly when they are of political entities, do not justify the means.

It is widely accepted that government economic policy can shape an episode of stagflation. The government of India had the courage to dare greatly and bite the GST bullet, and to attempt to curtail black money through demonetisation. Now it must drum up the courage to redress the fallout of these policies.

Higher liquidity and disposable income, and increased employment can pull us out of the quagmire we find ourselves in. To this end I advocate reduction and reform of direct individual and corporate taxes, and indirect taxes. Labour laws also need to be amended to generate employment.

Kavita Vinod Khanna was Partner in the legal firm ‘Economic Laws Practice’, and has headed HRD committees for ASSOCHAM, CII and Indian Merchants’ Chamber.  She recently served a term on the National Executive of the Bharatiya Janata Party.