The fund also revised downwards its forecast for India to 4.8% for 2019. 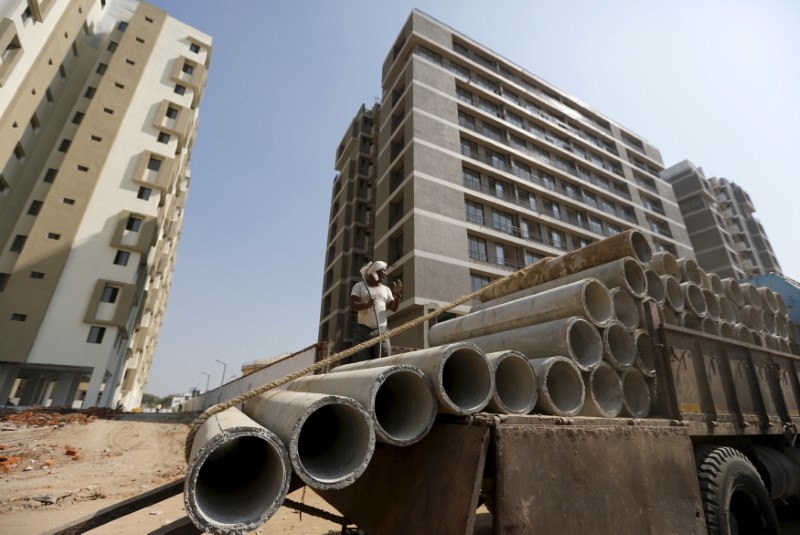 A labourer unloads sewage pipes from a truck at the construction site of residential buildings on the outskirts of Ahmedabad, February 9, 2016. Photo: Reuters/Amit Dave/Files

“The downward revision primarily reflects negative surprises to economic activity in a few emerging market economies, notably India, which led to a reassessment of growth prospects over the next two years. In a few cases, this reassessment also reflects the impact of increased social unrest,” the IMF said.

Gopinath also said the pickup in global growth for 2020 remains highly uncertain as it relies on improved growth outcomes for stressed economies like Argentina, Iran and Turkey and for under performing emerging and developing economies such as Brazil, India and Mexico.

Also read: What Will India’s New Saffron Curtain Mean for its Economic Growth?

India’s GDP growth in the July-September quarter of 2019 slowed sharply to 4.5%, the weakest pace in more than six years, as manufacturing output hit a slump and consumer demand as well as private investment weakened.

On the positive side, the IMF on Monday said market sentiment has been boosted by tentative signs that manufacturing activity and global trade are bottoming out. Besides, there is a broad-based shift toward accommodative monetary policy, intermittent favourable news on US-China trade negotiations, and diminished fears of a no-deal Brexit, leading to some retreat from the risk-off environment that had set in at the time of the October WEO.

“However, few signs of turning points are yet visible in global macroeconomic data,” it noted.

The envisaged partial rollback of past tariffs and pause in additional tariff hikes as part of a ‘Phase One’ trade deal with the US is likely to alleviate near-term cyclical weakness, resulting in a 0.2 percentage point upgrade to the country’s 2020 growth forecast relative to the October WEO, the IMF said.

However, unresolved disputes on broader US-China economic relations and the needed strengthening of the domestic financial regulatory system are expected to weigh, it added.

IMF managing director Kristalina Georgieva said the reality is global growth remains sluggish even as she mentioned that monetary easing has helped to stabilise the global economy, adding roughly 0.5% to global growth.

However, she said that a more comprehensive solution would be needed if global growth slows again. “A coordinated fiscal response can boost growth,” she said while calling for a “spirit of cooperation”.

Speaking at a press conference here on the WEO update, Gopinath said that a new international taxation regime is needed for digital economy to check tax evasion.

The world economy has been looking for some bright spots that can offset tighter financial market conditions and uncertainty at a time when trade tensions between the world’s largest economies are affecting economic confidence and momentum.