How Sustainable is India's Rise in Credit Card Spending?

Data from IPO documents filed by SBI’s credit card arm shows that delinquency level is stable. But can it remain so with overall low wage growth?

A Visa credit card is seen on a computer keyboard in this picture illustration taken September 6, 2017. Photo: Reuters/Philippe Wojazer/File Photo

Even as India is hit with reports of contracting growth and a decline in aggregate consumption expenditure, interesting data has emerged on credit card spending in the country.

The data comes from the draft prospectus filed by SBI Cards and Payment Services, the credit payments wing of State Bank of India, which filed documents for its initial public offering (IPO).

The IPO, which could generate around Rs 9,500 crore, could be one of the biggest recent domestic public offerings and certainly the first offered by an Indian credit card issuer.

More importantly, the draft prospectus offers some critical insights into the increasing pattern of credit card spending in India over the last five years and future projected trends surfacing from this booming industry.

From the data extracted below in Figures 1-4, the number of credit cards in force (in million) have grown (Figure 2) with five leading players dominating India’s credit card market i.e. HDFC Bank, SBI, ICICI, Axis and Citibank. 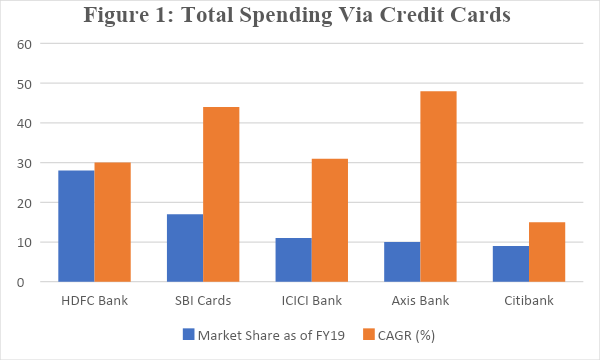 Each of these players have been witnessing a significant jump both, in terms of compounded annual growth rate (%) from the total spending seen via credit cards (Figure 1) and in their market share.

This has been aided by a rise in the number of transactions made per credit card (reflected in Figure 3) which points at a deeper entrenchment of financing through credit in the Indian economic milieu.

On a closer look in India, this indicates the early stages of an Americanised version of financial capitalism, similar to the 1980s which saw a de-regulation wave across US financial markets, allowing major banks to incentivise credit card spending by zeroing interest rates, that later allowed them to widen revenue margins and make profitable dividends.

What ensued post financial deregulation and with the development of a new credit-card based consumption culture was a new system of financial capitalism, which had serious adverse effects on levels of household savings and household debt as household income levels started to fall with an aggregate productivity decline.

India might be vulnerable to symptoms of the same crisis, although this certainly still some time away. 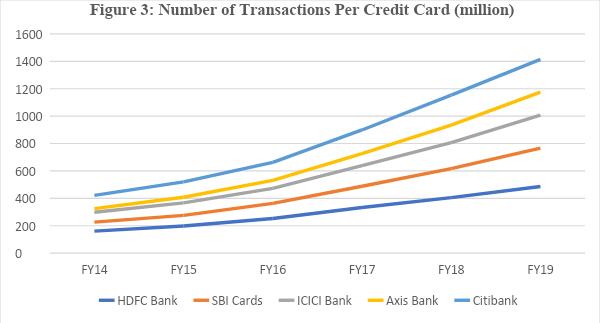 Looking at India now, based on the trends in credit card spending, the question is: Under the current economic circumstances, should this trend of financial capitalisation be a cause of celebration or worry?

After all, banks would be happy to issue as many credit cards that can help them maximise margins and expand their size in the pie of market share in the credit card industry. 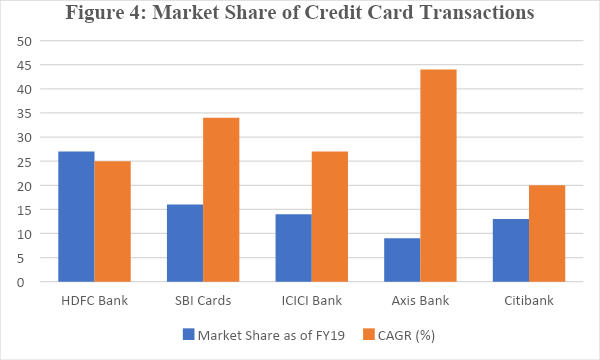 The answer to this question requires a closer monitoring and an analysis on the extent to which an increase in credit card spending, say amongst a section of income spending group, is backed with a proportionate rise in their respective real incomes, or not.

And on this there are a few, but not many, worrying signs.

A closer look at non-farm payroll data (Figure 5) that is made available more regularly from establishments like EPFO, ESIC and NPS for listed entities points at an unsettling picture.

Also read: All You Need to Know About Credit Card Fraud

Not only do we see here a sharp fall in wage growth levels of those employed in listed entities, we can also see this pattern as a reflection of a breakdown in the wage-price setting framework in existing labor markets. So, while one can see profits for some entities rising but the effect of this isn’t being seen in wage growth levels.

At the same time, a significant drop in rural wages (and in the farm sector too) has already been discussed in recent commentaries. 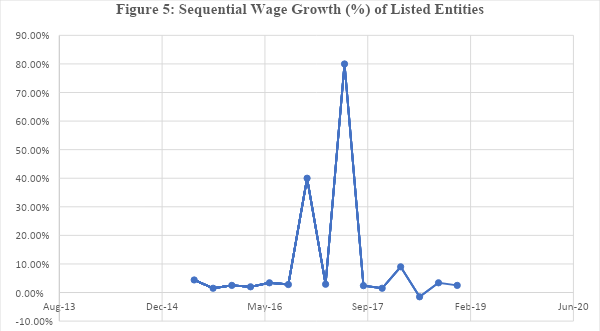 While such a wage-deflationary scenario remains a consequence of declining productivity (with reasons discussed here), what remains pertinent to observe is if credit-card spending continues to rise for some income groups whose wages are not proportionately rising. It is then that, similar to the United States, we might see a proliferation in credit-card dues in the future (indicated by higher delinquency rates).

This would lead to an exacerbation of household debt levels and lowering household savings substantively. The latter, a decline in household savings, is already being observed in India for a number of reasons.

But for now, the delinquency level of the credit card industry in India is more or less stable.

It is necessary to acknowledge finance as the very basis of economic and social relations in societies today, particularly those where access to formal channels of finance via credit remains a struggle in most of rural India. However, as Karl Polanyi in The Great Transformation (1944) cautioned, a pervasive nature of over-financialisation tends to extend itself into more and more dimensions of our lives, turning everything into an asset with a speculative price, and can therefore, spell trouble for societies in the future.

One major effect of this is connected with how a culture of over-consumption combined with tools of cheap credit finance (with low incomes) can unleash a vicious cycle of debt.

It is thus critical to ensure a more equilibrating relationship between money, finance and banking for them to all co-exist in weighted proportions, allowing neither to absolutely over-ride the other, but rather tame one another in a way that they remain customised to a society’s economic needs.

In the Indian scenario, without growth in money (wages), finance through easy credit (say via credit card spending) can make middling income households enter long cycles of debt which is counterproductive to both, growth of savings and other planned productive investments.

Unfortunately, given the current vector of our economic trajectory, unless there is a significant rise in wage-growth, a substantive section of the higher consuming population (via credit card spending) might gradually move towards that vicious cycle in times ahead.