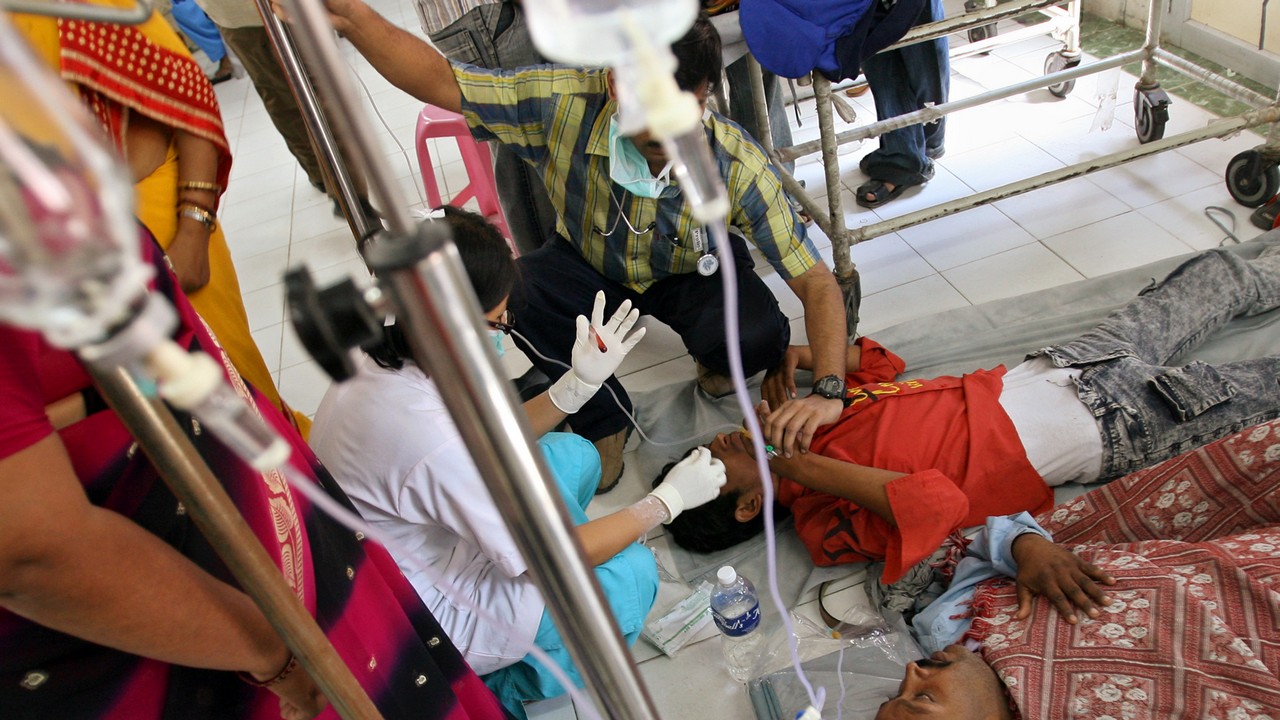 A patient is examined by a doctor in the dengue screening outpatient department at a hospital in New Delhi October 5, 2006. Credit: Reuters/Adnan Abidi

The ‘Kerala model’ of insurance was cited at NITI Aayog’s press conference last week on the National Health Protection Scheme. In a slide titled ‘Galvanising public sector through NHPS,’ journalists were told – citing Kerala’s example – that the money through this scheme can, in fact, be “ploughed back into public health systems”.

“In Kerala, 55% of the total money went back to public health sector,” stated the slide.

Amitabh Kant, NITI Aayog’s CEO and a Kerala cadre IAS officer, was present at the event. Dinesh Arora, NITI Aayog’s director for health, who has been a health secretary in Kerala, too cited the Kerala model.

While the central government this year decided to ramp up its insurance scheme – providing coverage of Rs 5 lakh to ten crore families – many other states such as Andhra Pradesh, Tamil Nadu and Kerala have had their own insurance schemes for years. The schemes are, in fact, much wider and more inclusive than the government’s “world’s largest healthcare programme”.

In states like Kerala, where the largest number of claims are from public hospitals, most of the money received is “ploughed back into public health systems” through programmes of upgradation of facilities and expansion of services. Over the past few years, the trend of claims from public hospitals has risen from 40% to the current 64%.

The Rashtriya Swasthya Bima Yojana (RSBY) scheme, launched in 2008, has been working in several states with some variations. Tamil Nadu has the Chief Minister’s Comprehensive Health Insurance Scheme, with coverage of up to Rs 1 lakh, and in critical cases up to Rs 2 lakh.

In Kerala, the Comprehensive Health Insurance Scheme (CHIS) offers Rs 30,000 like the RSBY. The scheme has been rejigged from time to time. In 2011 with the left government in Kerala, they introdiced CHIS Plus, which gave an additional Rs 70,000 aimed at people with heard conditions, cancer, renal failure and tertiary care.

Kerala’s CHIS is an example of the RSBY being modified to include both the below poverty line (BPL) and the above poverty line (APL) sections of society.

Also read: Health Budget Could Have Been About People, But Now It’s About Markets

Under the scheme, BPL card members are required to only pay a registration fees of Rs 30, while the APL ones need to shell out the entire amount of the premium. Hence, the population that figures in the BPL list of the planning commission as well as those who are on the state’s BPL list are included in the scheme rolled out in 2008.

In a decade since the roll out of the scheme, the percentage of enrollment of target families is at 92% in Kerala, with services being provided from 554 hospitals.

Every year, the Centre and state governments roll out new plans during budgetary allocations to tackle the increasing healthcare costs and to deal with rising health inequities. However, with constantly changing numbers and allocations, it becomes difficult to meet these new scheme requirements and the changes that follow. Some states have their own versions of the RSBY scheme that cater to the needs of the state.

What problems can the new NHPS cause to working schemes?

First of all, since the Centre’s scheme is not universal, one issue will be in figuring out who can and who cannot avail this scheme. While Kerala identifies people on the BPL list, the Centre will be relying upon the Socio Economic Caste Census (SECC). So what will happen to the existing beneficiaries already covered under the state-specific comprehensive schemes but who aren’t in the Centre’s BPL and only in the SECC list?

Secondly, governance of this scheme after it is rolled out is not clearly mentioned. NITI Aayog has suggested two methods – one where the state takes charge and runs it on a trust model or the second where the private insurance agency takes charge and runs it. Some states already have a weak healthcare systems and may not have the capacity to launch this as a state undertaking. In these states, like Bihar and Uttar Pradesh, that do not have any experience of an active role in public health, an insurance scheme like this will further push the state away.

In these states, as the state is pushed away, it might not be a case of money being “ploughed back into public health systems”. For example, government data say that in Bihar, 930 private hospitals were empanelled for the RSBY scheme and only 135 government ones.

Thirdly, will the state-run schemes even exist or will they have to be subsumed with the central government’s schemes? With the arrival of NHPS, some of these state initiatives might be phased out because there will no longer be fund allocation for RSBY.

Despite the Centre’s repeated explanations of cooperative federalism and health being a state subject, with this move by the Centre, states might find their own schemes being pulled out from under them.

This might happen even though states like Kerala are, in fact, far more invested in public health than the central government has ever been – the budgetary allocation for health currently stands at 1.2% of the GDP, while Kerala allocates 3.7 % of its allocation of development schemes towards public health.

Also, while the finance minister did mention in his Budget speech about upgrading sub-centres to health and wellness centres (which he also said in his speech last year), Kerala already has an ongoing programme. Under the Aardram Mission, the state government had already begun upgrading primary health centres (PHC) to family health centres (FHC) in September 2017. The service provision through FHC will be institution based, field or outreach based. Curative, counselling, health education, immunisation, medico-legal, pharmacy and laboratory are some of the institution-based services. Field based services include outreach activities carried out for various public health programmes.

Is insurance the answer to inequities in access to healthcare?

The original RSBY was conceived to help those who could not afford to access healthcare at a hospital nearby and at no extra cost. It was envisaged as a cashless scheme where the only money transacted was for the enrollment and the travel allowance provided at the end of a hospitalisation.

Over the years, numerous studies and evaluations have come up with evidence about roughly the same set of problems that this cashless system presented to the beneficiary. From unreadable thumb print readings causing delay in treatment to problems of fraudulent use of cards and packages to tide over the costs of out patient procedures which are not covered under the scheme.

Also read: The Government’s Previous Health Insurance Schemes Failed. Why Should the New One Work?

After a decade of its initial roll out, there have been definitive studies which have proved that insurance is not the answer to today’s inequities in healthcare.

There have been numerous studies that have shown the disastrous effect of out-of-pocket expenditure (OoPE) accounts, such as pushing a large section of the population below the poverty line in their attempt to seek healthcare. Can a new insurance policy which focuses only on in-patient care decrease OoPE?

Studies world over have indicated that increasing the role of private providers with public insurance does not solve the issue of out of pocket expenditure or the different malpractices to claim higher package costs.

The evidence on the implementation and problems in coverage of RSBY, and failure of the scheme to tide over the high OoPE, should be the biggest concerns to be taken into consideration while scaling up the scheme to include more people and with increasing number of private providers being roped in to render services.

Jisha Jayashree is a PhD candidate at the Centre of Social Medicine and Community Health, Jawaharlal Nehru University. Her PhD looks at the role of the private sector in Ayurvedic education in Kerala.