The model of development that was presented as a success story relies on patronising and providing incentives to large businesses while simultaneously suppressing wage incomes. 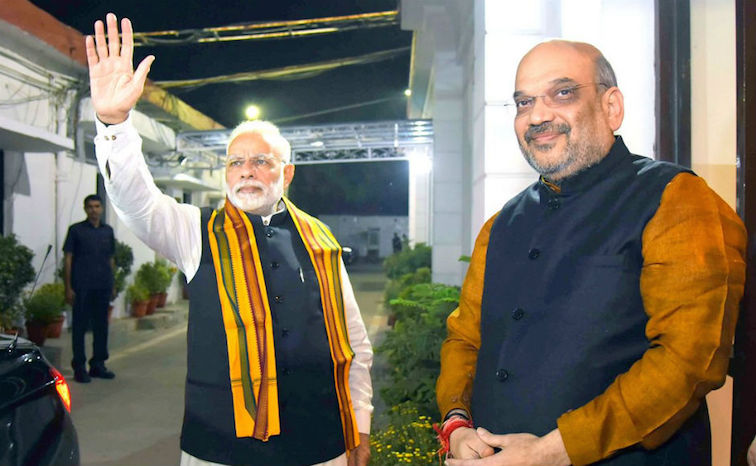 By now, almost everyone in the country knows the one thing Prime Minister Narendra Modi and the team around him excel in – the art of public relations and media management. This is the reason that the ‘Gujarat model’ of handling a state’s economy became such a major talking point in the run-up to the 2014 general elections. This model was widely projected across major media as a huge success in delivering both growth and development, even though that Gujarat’s performance was at best middling among all states, and in some cases, actually lagged behind in crucial indicators.

The myth of Gujarat’s economic growth was effectively punctured in 2014 by the impressive volume co-edited by Indira Hirway, Amita Shah and Ghanshyam Shah (Growth or Development: Which Way is Gujarat Going?”, Oxford University Press, 2014). They showed that much of the high growth so effectively advertised by the Modi state government was really a continuation of past trends which in turn were largely due to Gujarat’s advantages in agriculture and manufacturing, aided by the easy availability of land and infrastructure facilities such as electricity – all of which predated chief minister Modi. But in addition, further economic growth under Modi’s tenure as chief minister was heavily reliant on attracting large corporate investment through large subsidies and incentives of various kinds. This meant that the income growth was very unequal, so that the benefits of the growth did not percolate to the people as propagated by the ‘trickle-down’ hypothesis.

Ironically, given Prime Minister Modi’s famous invectives against corruption, the multiple favours given to large industry as part of the strategy of encouraging industrialisation also meant that Gujarat was one of the states where ‘crony capitalism’ flourished. Certain industrial groups were particular beneficiaries of the economic policies of the Modi government in Gujarat, such that the rise of the groups like the Adanis was almost coterminous with that of the Modi-controlled government in the state. Meanwhile, the large incentives provided to large corporate players (but not to small and medium enterprises) in terms of cheap or free land, water and other infrastructure created both extremely distorted markets for these as well as adverse fiscal consequences. The huge expenditure on incentives and subsidies left less public funds for social sectors, so that Gujarat had much lower per capita expenditure on social sectors compared to other states as similar levels of per capita income, and indeed performed quite poorly in this regard among the major states.

Other work, including by Maitreesh Ghatak, has also highlighted the growing gap between income growth and conditions of life, including the fact that Gujarat’s social indicators are generally much worse than comparator states with similar per capita GDP, and are only middling among all states – and indeed have worsened in some cases.

It could be possible, with effective media management, for these facts to be concealed from voters in the rest of the country, as they mostly were in 2014. So the electorate outside Gujarat could therefore fall for the tall claims made on behalf of ‘Modinomics’ and vote for someone who they thought would generate positive economic transformation and productive employment generation across the entire country, using the magic he had supposedly already produced in the state of Gujarat. But the hard reality of lack of developments would presumably be hard to conceal from the people of Gujarat themselves. Despite that, they continued to vote for the BJP, which even experienced rising vote shares over successive state elections. 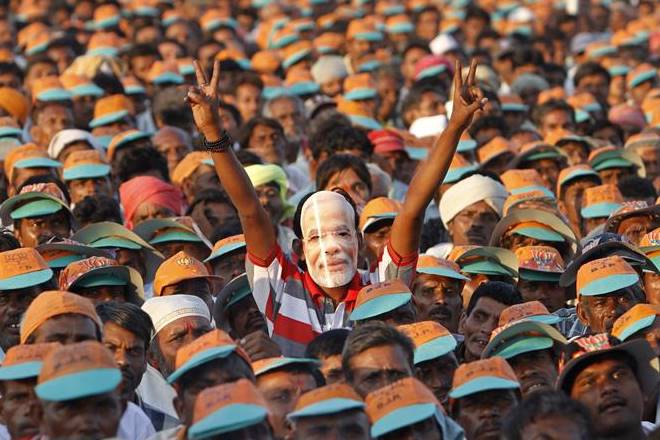 It is not a secret that in Gujarat, relatively high growth has been accompanied by increasing inequality. Credit: Reuters

Explanations for the continued political dominance of the BJP over most of this period and the relative absence of the economic dimension in electoral politics require going beyond the consideration of economic processes to political and sociological factors. But it is beyond question that the economy has now emerged as a major – even critical – aspect of political discussion in the state, so that economic malaises that have been festering for some time now are becoming more exposed within and outside the state. From the Patidar agitation for reservations to the counter protests, from the demands of Dalit communities, to the small traders and others claiming that their livelihood has been damaged – the story is about how economic processes are failing significant parts of the population.

Also read: Too Many Dreams Dangled Before the Nation, Have Gujaratis Seen Through the Conjurer’s Trick?

But what exactly explains these various recent eruptions of discontent in Gujarat that have mostly centred around economic concerns? After all, while it is clear that in fact the state has not been a star performer in economic growth as advertised and has actually been a relative laggard in areas of human development, many other states in the country show similar problems – and not all of them have been so afflicted.

The answer may lie not only in the rising aspirations that have been unmet by the state government despite its tall claims and earlier promises. Rather, it may well be because of increases in inequality and actual worsening of material conditions of a significant segment of the population, which is then finding expression in different sectional demands even though it reflects a wider dissatisfaction.

It is not a secret that in Gujarat, relatively high growth has been accompanied by increasing inequality. But what is less widely known is that this was also associated with stagnant or even declining material standards for a significant proportion of the people. Unfortunately, relevant data in this regard are only available until 2011-12, or roughly the first decade of Modi’s tenure in the state government, but they are still telling. According to the National Sample Survey, between 1999-2000 and 2011-12, real per capita consumption in the rural areas of the state hardly improved, and for the bottom half of the population did not improve at all. Employment growth was also low, especially in rural areas, relative to output growth, and in general the state was a classic example of the ‘jobless growth’ that is now part of the overall Indian economic trajectory.

Consider one of the most basic indicators of material conditions: the average wages in Gujarat in relation to wages in states at similar levels of per capita income (Chart 1). When Gujarat is compared to other large states with broadly similar levels of per capita income, it fares very poorly. Wages (here the averages of male and female wages in rural and urban areas separately) were significantly lower than the other states, even compared to Karnataka that had a lower per capita state NSDP. 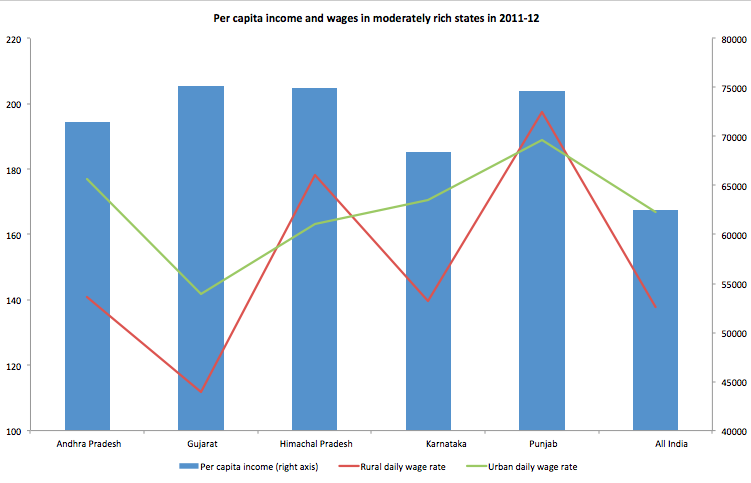 What is even more striking is that wages in Gujarat were also lower than the all-India average, suggesting that its performance in this regard was much worse than states that are much poorer. So, while Gujarat’s per capita income was around 20% higher than the per capita income for the country as a whole, rural wages were about 20% lower and urban wages are 15% lower. Clearly, the bargaining position of workers in Gujarat, in both towns and villages, has been very weak not just absolutely, but compared to the rest of India.

It could be argued that wages may have been low but then so was the relative cost of living, so that people could survive better even with lower wages because of lower prices. One way of examining that question is to compare wages with the state-level official poverty line that is based in some indicator of the prices of essential consumption items. So let us consider the wages of a male casual worker in the rural areas, and assume that this worker is willing to work 25 days in the month and is able to find such for 25 days. (Incidentally, the latter is actually a heroic assumption, since it is almost never met!) If such a worker were the sole earner of the family, how much would that wage income have generated? Specifically, how many people could he support to ensure consumption above the poverty line?

Chart 2 presents the results of such an exercise across Indian states for 2011-12. It turns out that on average, for India as a whole, such a worker could support 4.6 people at consumption above the poverty line with 25 days’ work at prevailing casual wage rates. The highest ratio was for Kerala, at 8.5 – but this reflected the positive effect of migration and remittances. Some north-eastern states also had high ratios, as did Tamil Nadu and Jammu and Kashmir.

But in Gujarat this ratio was only 3.1 – the second lowest in the country and indeed only slightly above the lowest (3.0 in Chhattisgarh). In other words, relative to state-level poverty lines, wages of male causal labour in Gujarat were at the bottom of the scale across India in terms of the real incomes they generated. Indeed, they were so abysmally low that they could not lift all family members out of poverty. Since this relates to the average, it is likely that workers at the lower end of the wage distribution would be even worse affected. So workers in Gujarat were among the worst-off anywhere in India.

This is actually an expected outcome of the very model of development that was being projected for a while as a success story, since that model relies on patronising and providing incentives to large business while simultaneously suppressing wage incomes.

Since then, conditions in Gujarat are more likely to have deteriorated than improved, especially for workers in both rural and urban areas. For a start, the sharp increase in agricultural incomes that was a major element in the previous growth has tapered off. The Reserve Bank of India’s latest data on economic performance of the states suggests that total real incomes in agriculture (according to the new GDP series with base year 2011-12) have stagnated since 2011-12, and even fell by 7% between 2013-14 and 2015-16. (By contrast, they increased by 24% in the ‘laggard’ state of Uttar Pradesh.)

Also read: Was Modi’s War on Cronyism Just Another ‘Jumla’?

Further, all the anecdotal evidence suggests that job creation in the state has fallen even below its previous poor performance, especially as the highly capital-intensive projects incentivised by the state government deliver very little new employment. Meanwhile, the small and medium enterprises that provide the vast bulk of employment have suffered hugely because of the disastrous demonetisation and the completely ham-handed implementation of the GST. Other economic turmoil created by rightwing forces implicitly encouraged by the BJP, including the mess in the livestock, dairy and leather industries created by the gau raksha brigade, has disrupted supply chains, destroyed occupations and even made farming more difficult. So even self-employed livelihoods have increasingly come under threat.

These problems are not confined to Gujarat, but it is possible that they may appear to be more extreme in that state, precisely because of the huge inequalities generated by the growth processes and the economic strategy of the state government. The opposition – especially the Congress – has therefore been right to focus on these economic issues. But to promise a genuine change for the better, it must also propose an alternative economic strategy that moves away from reliance on large capital to create growth that will then trickle down, to policies that focus directly on increasing employment and wage incomes and increasing the viability of small producers.