Reduced Working Hours to Be Part of German Wage Talks

If the union’s gambit is successful, economists counting on strong wage rises will be watching to see if there are deflationary effects as domestic consumption overtakes exports. 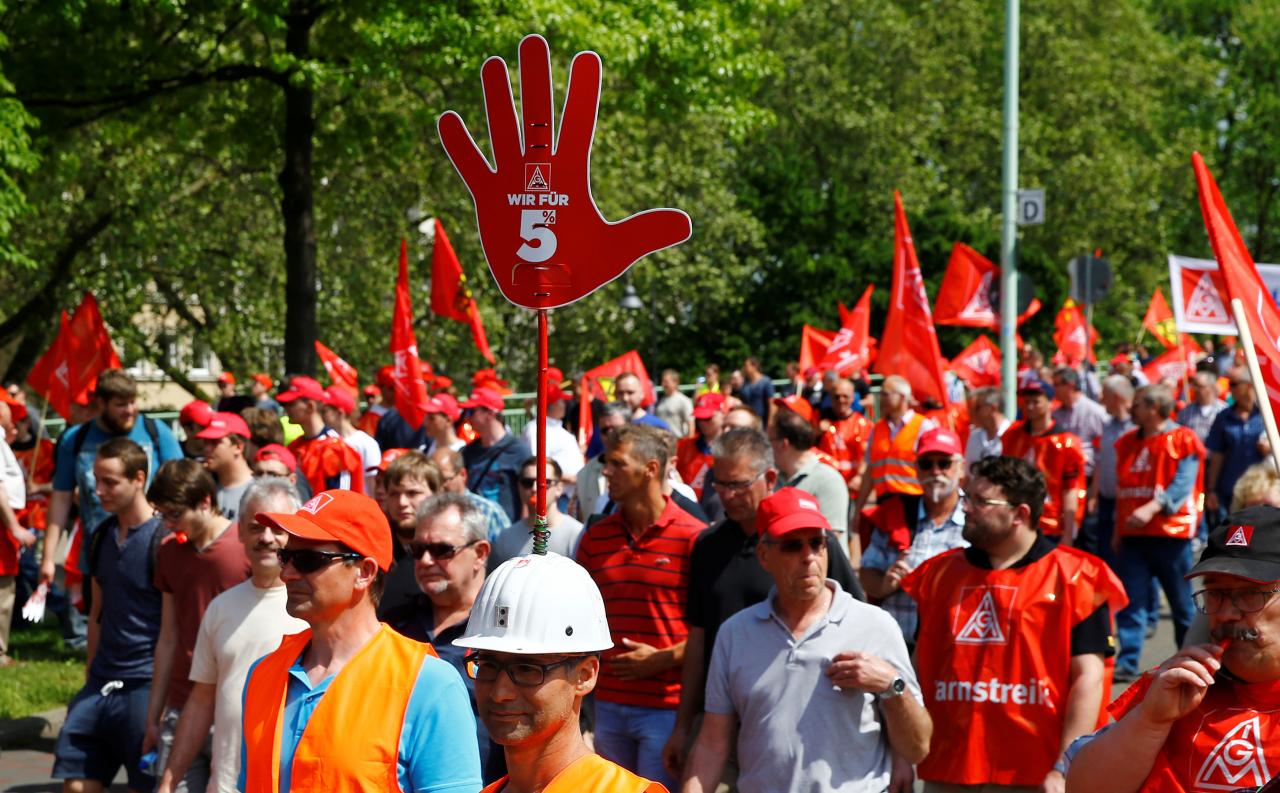 A worker has a sign on helmet with text 'We are for 5%' as steel workers of Germany's IG Metall union protest for higher wages in Cologne, Germany May 12, 2016. Credit: Reuters

If the union’s gambit is successful, economists counting on strong wage rises will be watching to see if there are deflationary effects as domestic consumption overtakes exports.

A worker has a sign on helmet with text ‘We are for 5%’ as steel workers of Germany’s IG Metall union protest for higher wages in Cologne, Germany May 12, 2016. Credit: Reuters

Frankfurt/Berlin: The trade union powerhouse that won the 35-hour work week for Germans more than two decades ago is mobilising for a new campaign to reduce working hours at annual wage negotiations about to kick off nationwide.

IG Metall, Germany’s biggest union with 2.3 million workers mainly in the car and manufacturing industries, says shorter hours will help shift workers and those who need to care for children or elderly relatives, with wide implications for how German society evolves in the 21st century.

If the union’s gambit is successful, economists counting on strong wage rises will be watching to see if there are deflationary effects as domestic consumption overtakes exports as the driver of the euro zone’s biggest economy.

The union begins internal discussions at the local level on Thursday, just as campaigning in Germany’s parliamentary election enters its final phase, with issues of work and family high on the agenda.

“The timing could have been made to order for a wage round in which our issues will have great support from society,” IG Metall President Joerg Hofmann told a union conference in late June, as he launched the initiative.

“The value of time and the value of money will carry equal weight,” Hofmann told journalists last week.

IG Metall will release its national list of demands at the end of October. Negotiations with employers begin in November.

Buoyed by record employment, a shortage of skilled labor and a strong economy, it is in its strongest bargaining position for years.

“Working time is our number one concern,” Oliver Zander, chief executive of the Gesamtmetall umbrella association of employers that mirrors IG Metall, told reporters last week. “We need more hours to be worked.”

Reducing working hours now could be problematic, particularly for small companies, he said, and argued productivity gains were not keeping up with unit labor costs.

“We have a very tough wage round ahead of us.”

IG Metall, whose members work at giants like Volkswagen and Siemens as well as thousands of smaller firms, is trying to wrest back control of working conditions as employers demand ever more flexibility.

According to the plan laid out in June, the union wants to establish that workers can reduce weekly hours to 28 for up to two years with a right to return to full-time work. In the cases of low-paid workers who need the extra time to care for relatives, employers would help make up the pay shortfall.

A poll of nearly 700,000 workers at its plants earlier this year found that many shift workers in particular were dissatisfied with their influence over working patterns. One in three of those surveyed worked shifts.

IG Metall acknowledges there may have to be a trade-off with the headline pay rise.

“Where big sums are involved, such as compensation for the shortfall, the employers will certainly want their payback,” Hofmann told Germany’s Deutschlandfunk radio last week.

“It’s quite difficult to assess what the implications of the wage round will be on working time arrangements and wage growth,” he told Reuters.

Both the Bundesbank and the European Central Bank are keeping a close eye on the negotiations for any sign that wage growth is picking up, potentially lifting inflation and allowing the ECB to start winding down its massive stimulus program.

Despite robust growth across the euro zone, wages have barely risen for years, likely reflecting hidden slack in the labor market – the shortfall between the work people want and the amount available. This is putting the ECB in a tight spot as it has missed its price growth target for nearly five years.

It’s not the first time the German work week has been cut. A decade ago, Germans voluntarily cut their hours to share the available work more equally during the global economic crisis.

But where that was a crisis measure, this could be the beginning of a social trend, experts say.

Employers got a hint of the mood this year, when most of the more than 100,000 employees at national rail operator Deutsche Bahn were given a choice of more money or more holidays and chose the extra days off.

“I do believe the trend will go in the direction of shorter working hours,” said Anke Hassel, academic director of the Institute of Economic and Social Research (WSI) of the trade union-affiliated Hans Boeckler Foundation.

“IG Metall is the pioneer.”

Germans already work fewer than any other nation in the OECD – 1,363 hours a year on average – partly due to large numbers of women working part-time.

Jon Messenger, working time specialist at the International Labour Organisation, said the fall in working hours could be seen as a natural evolution of working life, especially in the face of enormous technological change.

“That type of working hours reduction is not something I see much of, although I think it would be a good thing,” he said. “It seems to me like it would be a very logical response to increasing automation of production, for example.”

Willem Adema, senior economist at the social policy division of the Organisation of the Economic Cooperation and Development (OECD), agreed, especially when a reduction was coupled with the right to return to full-time work.

“Long hours are not necessarily more productive,” he said.

IG Metall’s wage settlement will affect as many as 3.9 million workers, including members at plants not directly covered by the pact, and will have a strong influence on other agreements among the 44.4 million workers throughout Germany.

“If IG Metall goes a step further with working time, it will certainly send out signals in many areas,” said Thorsten Schulten, wage expert at the WSI.

“I can well imagine that we will experience this as a broader issue perhaps already in the next wage rounds, and also in future rounds,” he said.