Flagship Governance Programmes: Who Did it Better, UPA-II or Modi Government?

A recent article claimed that the Modi government has significantly improved or tweaked the implementation of various schemes started by the UPA-II administration. But the numbers quoted need to be questioned. 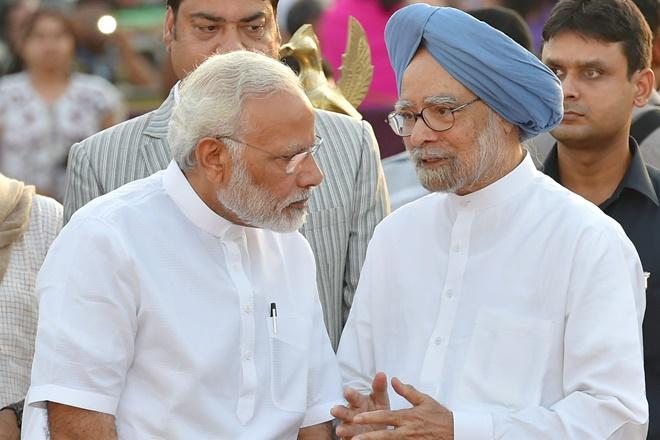 Note: This is the second part in a five-series rebuttal and examination of how well the Modi government’s flagship governance schemes have functioned so far. Read the first part here.

The Wire recently published an article titled ‘Modi May Have Repackaged 23 UPA Schemes But Most of them Are Working Better Now’. The authors’ main thesis is that even if the names of the government schemes have been changed or have been slightly repackaged, the Narendra Modi government is implementing the programmes much more efficiently than the previous government.

Towards the end of the article, the authors chart out a comparison of the performance of various schemes and projects. However, there are deep flaws with this analysis, as pointed out in the first part of our series.

Continuing on with our series, let us consider their comparison of the Rajiv Gandhi Gramin Vidyutikaran Yojana (RGGVY) and the Deen Dayal Upadhyay Gram Jyoti Yojana (DDUGJY).  In recent months, the Modi government’s electrification scheme has assumed centre-stage in terms of political narrative.

The basic premise of their argument itself shows Modi government is under performing and is far behind what UPA’s achievement of electrification of 12,071 villages every year. Because as per the authors’ own account, the Modi government is electrifying only 7,087 villages in a year which is 4984 villages or 59% of what UPA did every year.

Despite this, the DDUGJY has been promoted as a runaway success after the name change by many government officials and in particular, former power minister Piyush Goyal. Over the last year, Goyal has tweeted selective data to show his and Modi government’s achievements are much better than the previous regime. Take a look at the tweet below.

As I pointed out in an earlier article, this particular method of analysis is flawed. In the above tweet, Goyal has selected the worst year of performance when it came to the UPA government while skipping his own government’s performance during its first year.

These figures for the table above are not accessible through the ministry of power’s website. However, the REC annual report give us the complete numbers from 2007-08 to 2016-17. (REC – Rural Electrification Corporation Limited).

The practice of rural electrification, however, is not only electrifying villages, but also providing free electricity connections to ‘Below Poverty Line’ households. It will be interesting to see how both the governments performed in first three years here. Let us use the same method as earlier for easy understanding.

When Goyal tweeted, it appears that he must have skipped the 2014-15 figure intentionally because it’s nothing great when compared to the UPA administration’s last and worst year of governance. If UPA did 1,197 villages, Modi government did 1405. But in the case of free electrification for BPL families, UPA’s worst year recorded connections to 9,61,730 households. In the first year of Modi government, they managed to connect only 7,59,377 BPL households.

Next we come to the National Skill Development Mission, which under the Modi government became the Pradhan Mantri Kaushal Vikas Yojana (PMKVY) or Skill India. This is the eight topic compared by Mohit Kumar Daga and Parag Mohanti in the earlier article.

Here too they have given sources to claim Modi government trained nearly 7 lakh more youths in two years (2015-17) than the previous government’s last three years. They cite this link to claim, from 2011 to 2014 in UPA’s tenure, 13.5 lakh individuals were trained through National Skill Development Corporation and from 2015-17, Modi government did better by providing skill enhancement training to 20.45 lakh individuals under PMKVY. Their supporting document is this standing committee report of the skill develop ministry requesting grants. This is an interesting document which gives us enough insight into the working of ministry of skill development. A snippet of it is presented below. 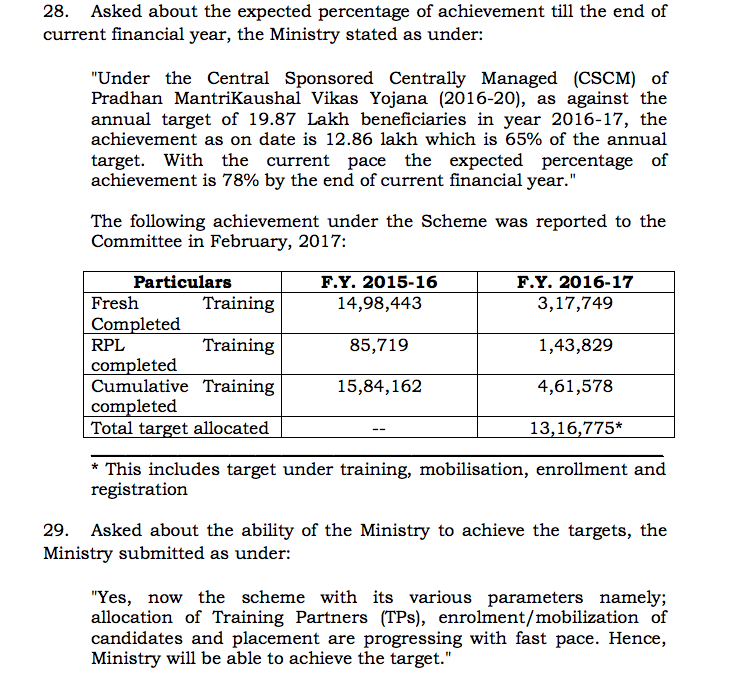 What should we make of the authors’ claims of skill development of nearly 2.045 million individuals in two years? It appears to bean amazing achievement. However, what the authors did not disclose is other sections from their own source which question the functioning of the ministry and the ministry’s ability to achieve the set targets. Missing the target by 35% is not considered a small failure.

Before going into further details, let see check PMKVY’s current status. Livemint reported in June 2017 that the government does not want to stick to the earlier target of training 500 million individuals by 2022. Since the inception of the program, it has never achieved the yearly set target except the last year of UPA 2. This government press release says “more than 1.17 crore people trained under MSDE programs”. But they conveniently do not mention the timeframe it took to reach this number.

However, the government mentions under the flagship program of PMKVY 26.5 lakh people have been trained. As the scheme PMKVY was started on July 2015, we can safely assume the number 2.65 million is for two years.

We have a source to check the actual numbers of individuals trained under the scheme. NSDA website has the year wise reports from 2011-12 to 2015-16 which demolish the claim of the authors. For easier understanding, let’s put the target, achievement and percentage of achievement into a small chart.

There is difference in the 2015-16 report unlike other reports. In that report, there is a proposed  target, a target accepted by the ministry and the achievement mentioned is based on the accepted target which is obviously 18.62% lower than the proposed target. Nobody knows when or at what time of the year this revision has happened. Hence, we have taken the actual target and the results for our calculation in the chart. This link from skill development ministry will show you the cumulative number of people trained in 2017. As we have no idea about the exact target, we can’t calculate the ratio of success.

The fact is Modi government could not meet more than 72% of it’s own set target in this case. And just because of its inability to perform, they abandoned a much advertised project without giving any further explanation on the revised targets. Now, there is no set target to the ministry on the number of people to be trained.

With the available data, it is very clear that the authors of the article were deliberately trying to mislead the readers of The Wire by putting out selective data.

The ninth point of comparison is between JNNURM and AMRUT. With the reference to this government press release, the authors claim, “central layout Rs 50,000 crore over five years. Projects worth Rs 30,657 crore approved in two years 2015-17”.

To check the merit of this claim, let us start with the press release itself. The statement’s highlights can be seen in the below screenshot.

And as support for their claims on JNNURM, authors refer to this request for grants report from parliamentary standing committee on urban development of 16th Lok Sabha and state that from 2005 till 2014, under JNNURM, Central government allocated Rs. 50,066 crore and only 51% of the projects are completed.

JNNURM was a concept in which the state government would select a city/ town and submit the proposal to the Centre. The areas covered were urban infrastructure and governance (UIG), Urban Infrastructure Development Scheme for Small and Medium Towns (UIDSSMT), Basic Services to Urban Poor (BSUP), Integrated Housing and Slum Development Programme (IHSDP) as sub missions. And there were numerous other schemes under every sub plan. The funding pattern is explained in the below screenshot. 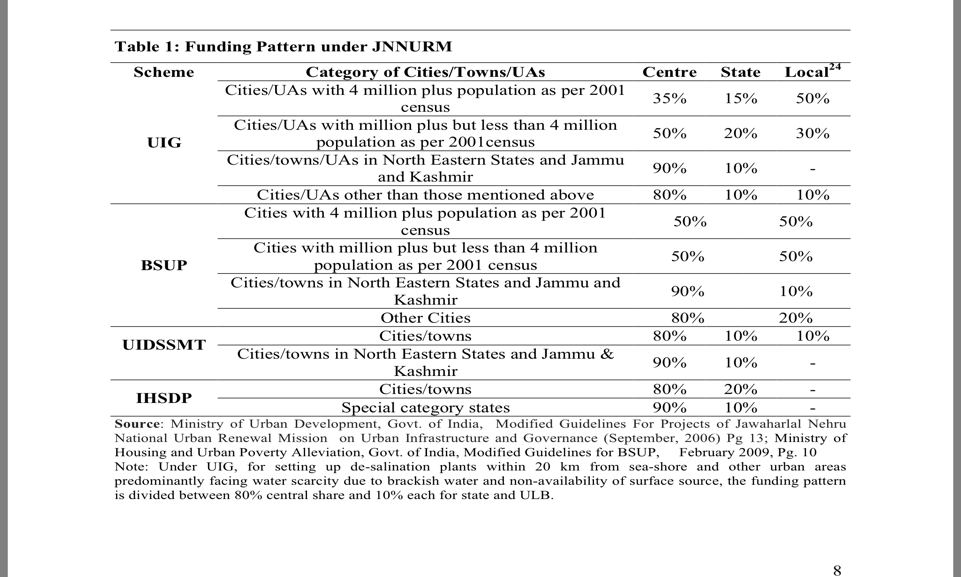 We have a problem in hand. I tried here, here, here, here, here to check the data and at last, found a page here. All the data which was earlier available in the public domain is now either deleted or hidden from public view. Readers should open all six links to understand how troubling it is for the Modi government to pull the plug on data from the time of the UPA.

Is it because, once a comparison is done, it will demolish the hype created by this government on the developmental front? This is not the first instance. If the Modi government is performing much better than the previous regime, why should the government hide historical data from public view? They have hidden data even from the Open Government Data platform.

With what is publicly available, however, consider the following. As mentioned earlier, the program was started in 2005 with an aim to finish implementation by March 2012. However, this had complete the implementation by 2012 March. But had to extend for two more years till 2014 March. And it further extended till 2016. So, what the one working page is showing is the last stage of the extended program. In that itself, it shows, the central share released is Rs 17,892.73 crore just for one aspect of the program – Rajiv Awas Yojana.

Another source that we have is a 2010 Crisil study, which evaluated the performance of first five years. As per that report, Rs 32,780 crore was sanctioned for 143 water supply and 105 sewerage projects. By the time of the publication of this report those projects were 63% covered in Water supply and 61% covered in sewerage in those cities where the projects were on. This TOI article also provides further insight into the way JNNURM progressed.

Another report, a CPR study from March 31, 2012, showed that as of that date the UPA government had committed Rs 62,933 crore to  sanctioned projects in just nine major states and Delhi. If the implementation was poor, that was the responsibility of the respective state governments who were implementing these projects. The disbursal of the central quota of the fund was based on the submission of the progress report and verification of the same. And as on the same date, Rs 39,290 crore were already released to these states. We have to remember, we are speaking about just 10 states and that too on March 2012. That itself is more than enough to prove that the authors were deliberately showing selective data to the public.

Now let us check the status of AMRUT and the progress that has been made since its launch.  The AMRUT website itself contains no data or detailed progress statistics. Progress of the projects part is still under development after more than two years of the launch of the scheme.

This fund release statement shows that a total of Rs 2,481.06 crore was released by Centre to 30 states include Chandigarh (but not a single rupee is released to Delhi) till date. That is just Rs 1240.53 crore per year.  There is more than enough data to show that here too the Modi government’s developmental work does not live up to the hype.