The single-minded focus on GDP growth ignores the low income and, consequently, poor demand potential of the bulk of India’s population, downplaying the ill effects of poor policymaking.

Indian labourers are silhouetted against sunset at construction site in Chandigarh. Credit: Reuters 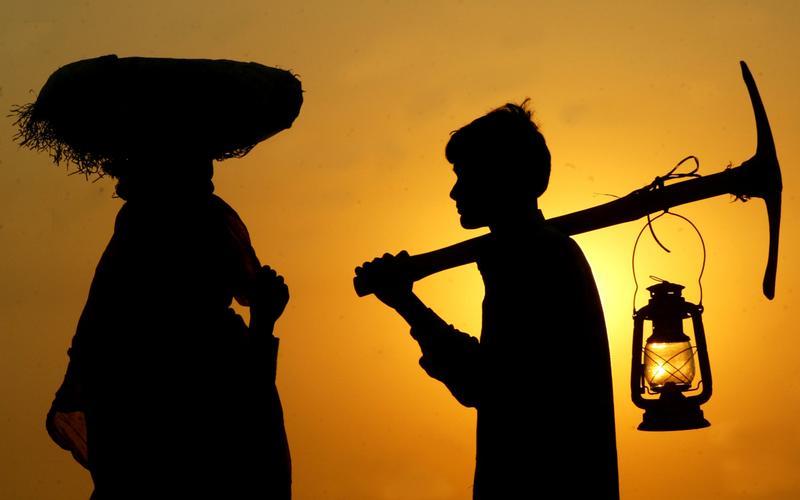 Indian labourers are silhouetted against a sunset as they return home after day-long work at a construction site in the northern Indian city of Chandigarh, December 18, 2005. Credit: Reuters/Ajay Verma

Can half the workforce of rural India be considered “marginal to the economy”? That, it appears, is what Lord Meghnad Desai, eminent economist, Gujarat-born and UK-naturalised Labour life peer and Indian Express columnist, believes.

Desai has had a notable academic career, earning his doctorate at the University of Pennsylvania, specialising in agrarian economics at the University of California, Berkeley and teaching at the London School of Economics. He began his career as a Marxist economist, specialising in developmental economics and econometrics. He continues to be interested in questions of labour, but his perspective has developed to have less of Marx and more of Modi.

Desai’s regular column in the Indian Express is titled ‘Out of my mind’. In his “Political economics” piece, he defends Modi’s demonetisation move, saying, “The cost of demonetisation was (as I predicted in this column) just about one half of one per cent of GDP growth.” Continuing with this approach of analysing economic data through the prism of GDP – an obsession shared by many economists in policy making, global capital and select streams of academia – he makes an astounding statement:

“Daily casual workers suffered as and when cash dried up, but again they are marginal [emphasis added] to the economy. It is in the nature of their work that there are days when they don’t find employment, even if cash is not short.”

Daily casual workers in India are the ‘wretched of the earth’. They are at the bottom of the pyramid, deprived of any assets of their own, without a steady job and income. All that they can offer is their bodies for any kind of manual labour at very low wages. Their plight is rarely covered by the media and for capital market research, they remain non-existent.

Indeed, the same census data reveals that in 74.5% of rural households, the monthly income of the highest earning member is below Rs 5,000 per month. As the income and value added by a large section of India’s population is low, it follows that the same applies to its contribution to the country’s GDP. Hence any adversity – like demonetisation – can squeeze their already-depressed incomes but only have a “marginal” impact on the country’s GDP.  It is precisely this context that economists who are oblivious to the socio-economic misery of the majority of the population rely on while calculating the “marginal” negative impact of demonetisation. Desai’s brazen disdain for their plight – evident in his casual remark that the nature of their work is such that there will be periods of unemployment even when cash is in abundance – ignores that even in optimal conditions, their incomes from manual labour are low, and demonetisation will have caused them even more socio-economic suffering.

The single-minded focus on GDP and focus on being called the fastest growing of the global major economies ignores the low income and, consequently, poor demand potential of the bulk of India’s population. The economic strategies of current and past governments have resulted in widening income and wealth disparities driving the GDP, and the growth has ceased to be a reflection of the socio-economic health of the underlying population.  While from 1980-81 to 2009-10, the share of compensation of wages to Net Domestic Product (NDP) has steadily come down, it accelerated during the 2002-03 to 2009-10 period when the real Net National Product growth rose sharply. The fruits of this high growth benefitted the organised sector whose share and surplus of NDP increased sharply. Economists like Meghnad Desai are only concerned with the quantum of GDP and its drivers, and appear ignorant of the fact that while formal sector services have become a large component of GDP, the bulk of the country’s employment is concentrated in low wages generated from manual labour and cultivation, and it is only a small fraction of the population in the formal sector which is driving the GDP.

The capital market mindset reinforced by the media focuses mainly on the organised, formal economy in India while ignoring the socio-economic conditions of the bulk of the population and the labour force. By marginalising their existence, policy makers are framing policies which can only further widen income and wealth disparities in the Indian economy. And in doing so, they are depriving the economy of long term sustainable growth, instead relying on bubbles of growth.