Whether any of this means the government will finally increase R&D spending to 1% of GDP or distribute resources more favourably on February 1 remains to be seen. The Economic Survey 2017-2018 includes a separate chapter on India’s science and technology efforts. It provides a bird’s-eye overview of the outcomes of major R&D investments in the country and advises steps that can be taken to improve them.

These are some notable points (quoted verbatim from the report):

8.12 … in 2015, there was a sizeable decline in R&D spending even as GDP per capita continued to rise. At its current rate, India would just barely reach GERD [Gross domestic expenditure of research and development] of 1 percent of GDP by the time it was as rich as the US.

Through [8.12],  the survey also acknowledges that while India’s R&D spending has been on the rise, the total fraction of GDP it constitutes has stagnated at 0.6-0.7% of the GDP over the last two decades, and that the bulk of this spending has been focused on the atomic energy, space and defence sectors. Additionally, [8.6] also notes that, “Given the country’s severe health challenges, the low – and virtually stagnant in real terms – budget of the ICMR [Indian Council for Medical Research] is striking.” According to another survey (discussed below), the ICMR’s cut is just 2.4% of government spending on R&D.

Whether any of this means the government will finally increase R&D spending to 1% of GDP or distribute resources more favourably on February 1, when the Union budget for 2018 will be announced, remains to be seen.

8.17 The Nature Index (which publishes tables based on counts of high-quality research outputs in the previous calendar year covering the natural sciences) – ranked India at 13 in 2017. But there is still a considerable lag in levels between India and the other two large countries, and the rate of improvement in China between 2001 and 2011 is dramatically better than India’s.

8.19 … On one hand, much of India’s low patent output could be due to its lower middle-income status. However, patents have grown much faster with income in countries like China, Korea, and Japan. Unless there is a greater focus on R&D, rising income alone will not allow India to catch up in the near future.

8.21 Reports indicate that due to manpower shortages there is a backlog of almost 2 lakh patents pending examination. In 2016-2017, there were only 132 examiners for all patent applications in India. … 8.22 The government’s recent hiring of over 450 additional patent examiners and creation of an expedited filing system for Indian residents in 2017 will therefore be a welcome and crucial intervention to help fix the existing patent system. 8.29 The separation of research from teaching has been an Achilles heel for Indian science. Universities have students but need additional faculty support, while research institutes have qualified faculty but are starved of bright young students brimming with energy and ideas. A closer relationship between the two in specific geographic and spatial settings would help nurture research in areas reflecting the fields of science in which the national research centres have strengths.

8.30 Government rules such as those requiring L1 for procurement are simply not geared [towards] providing the flexibility that is needed at the frontiers of research, where speed, product quality and reliability make all the difference between success and failure.

The numbers quoted in the survey are not entirely new. Many of them echo the recently released findings of the National Science and Technology Management Information System (NSTMIS), a body under the Department of Science Technology (DST). Some salient findings – from The Wire‘s report on this – include: 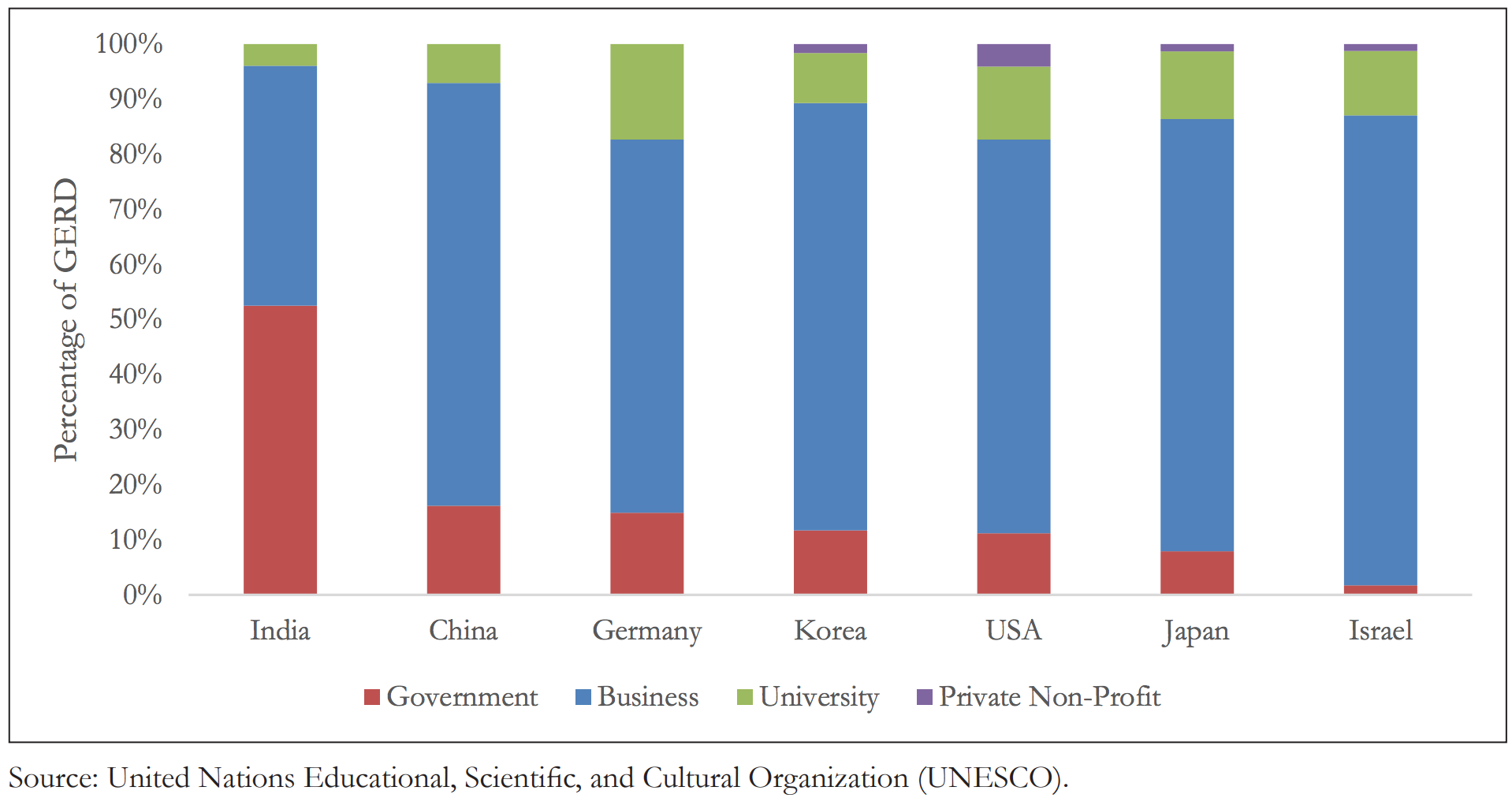 Finally, while the NSTMIS survey state that India’s share of the world’s research publications has been growing at a pace well ahead of the global average (according to two journals databases), the Economic Survey has had the sense to acknowledge one of the more misguided reasons this is happening: [8.16] “The major catalyst for their explosive growth is ‘the demand created by increasing emphasis on the number of research publications as an important determinant'” [according to a paper published in 2017].

While many of observations – by chief economic adviser Arvind Subramanian – in the survey hit the right notes, at least according to what various scientists have been saying over the past year, that alone may not be enough to fix some longstanding issues. Some examples include political intervention in universities, low spending on education and healthcare and, particularly, insufficient translational research. 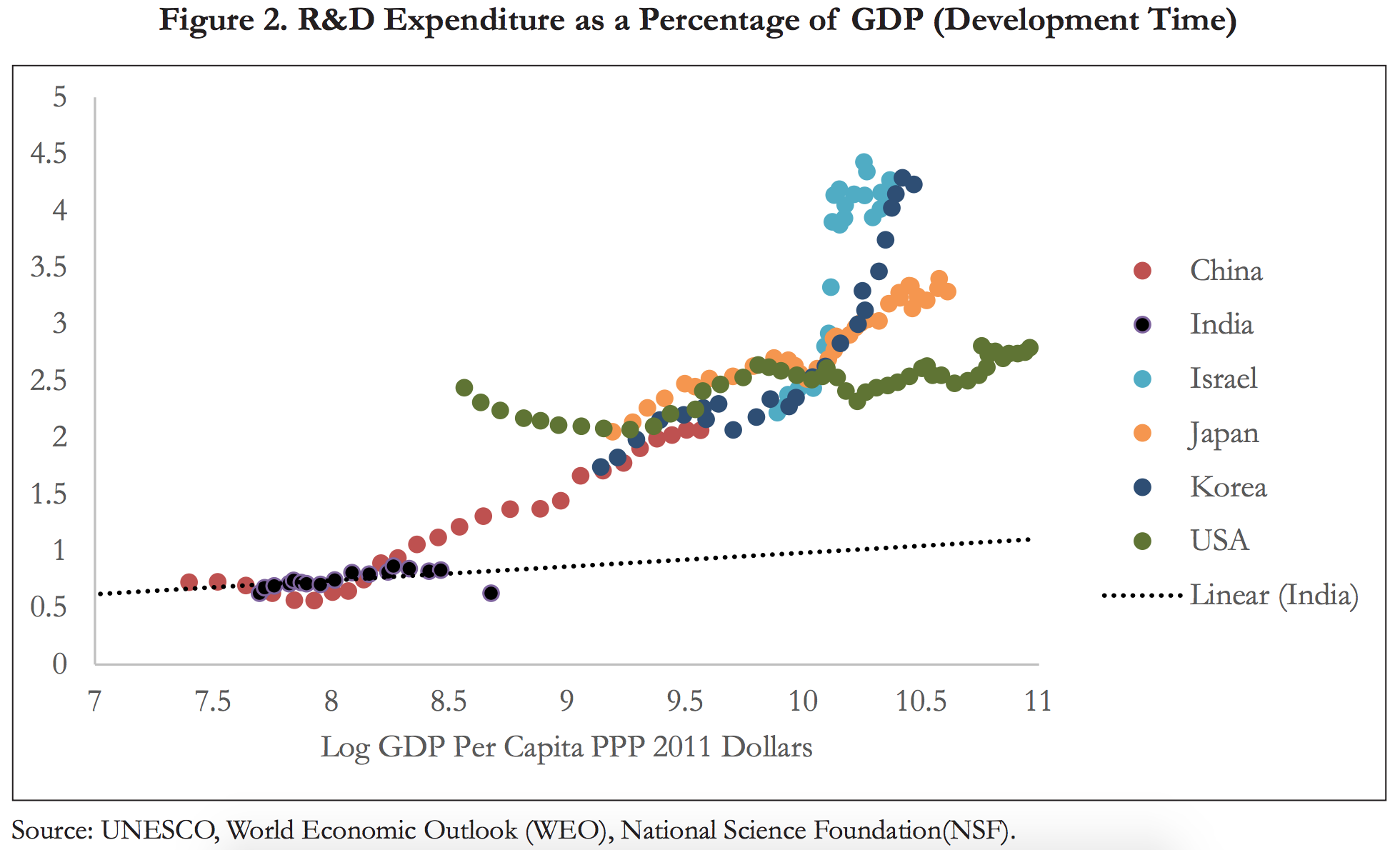 For another, the science and technology chapter glosses over some of the more systemic and/or cultural issues that hamper research and development. In section VI, the survey suggests that the government leverage the size of the Indian scientific diaspora as well as a “growing anti-immigrant atmosphere in some Western countries” to bring more scientists home. It concludes: “There has been an increase in the number of Indian scientists returning to work in India during the last five years, but the numbers are still modest (from 243 during 2007-12 to 649 in 2012-17).”

“Yes, in the context of growing anti-immigration sentiments in some countries, there is certainly an opportunity to attract more foreign-based scientists to India,” said Pushkar, the director of the International Centre, Goa, and a commentator on matters of higher education. “However, what matters is what we do with them when they come back.”

Many who come back regret returning to India because they are not treated well at their workplace, especially universities. Others have unrealistic expectations about life in India. Many are dismayed by the current nature of politics. In fact, there are also cases of brain reversal, where those who return to India pack their bags to return to the country they came from, or elsewhere.”

And when they share their experiences with other Indians contemplating a return, the latter are deterred, “anti-immigrant politics notwithstanding”.

A similar story prevails in the case of government grants and programmes. While the survey mentions the DST’s INSPIRE faculty scheme, The Wire recently reported that at least 35% of those who avail it don’t end up with permanent faculty positions at the end of it. Moreover, the survey chapter also doesn’t talk about bettering women’s participation in scientific research.