The survey examines the impact of the Modi government's push for formalisation but is relatively less silent on what it means for employment and socio-economic development. 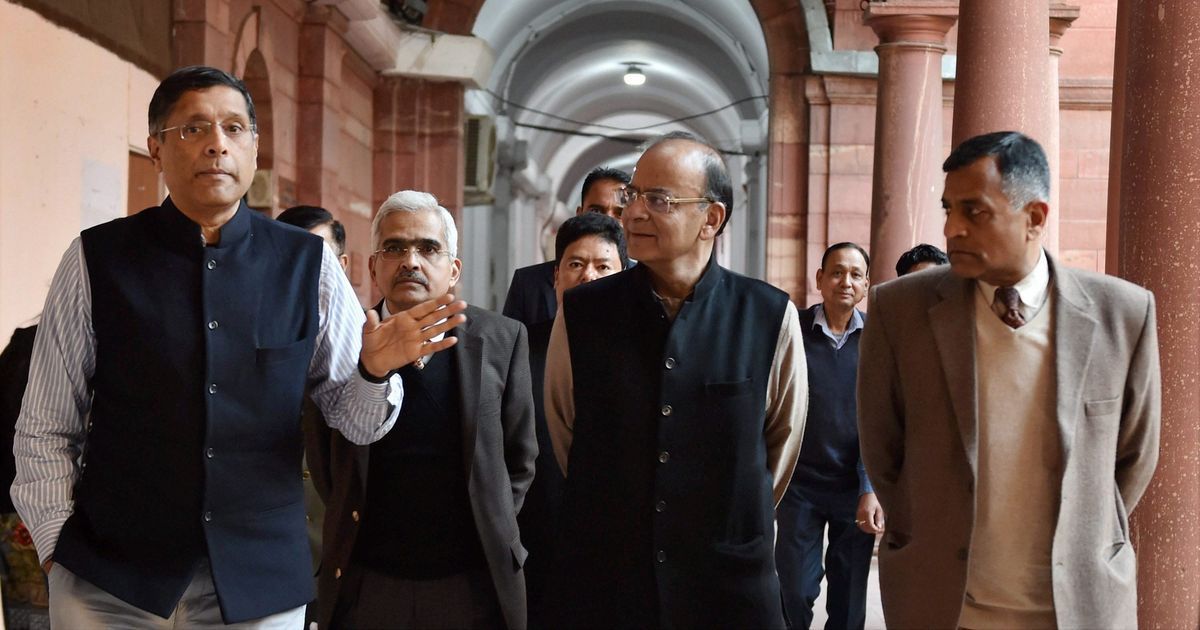 A flagship assessment of the state of the Indian economy, this year’s Economic Survey examines a core piece of the Centre’s policy-making efforts. Credit: Reuters

Amidst its trademark assessment of various sectors of the Indian economy, this year’s Economic Survey (2017-2018) expends a great deal of attention on what is becoming the pièce de résistance of the Modi government’s economic policy-making efforts – formalisation of the country’s informal sector.

Right off the bat, in its preface section, the survey looks at the advantages of two recent and contentious policy decisions, demonetisation and a hastily-rolled out Goods and Services Tax (GST) regime. As evidence that both moves have helped nudge along formalisation, it presents two figures.

One, the roll-out of India’s GST has resulted in a “50% increase in unique indirect taxpayers under the GST compared with the pre-GST system”. This translates to a substantial “3.4 million new indirect taxpayers”.

Two, chief economic advisor Arvind Subramanian and his team also carried out a rigorous assessment of the impact of demonetisation and found that the note ban and GST resulted in an additional 1.8 million individual tax papers, representing 3% of existing taxpayers.

“Taking seasonality into account it is found that there is a 0.8 percent monthly trend increase in new tax filers (annual growth of ~10 percent). The level of tax filers by November 2017 was 31 percent greater than what this trend would suggest, a statistically significant difference,” the survey notes.

How much of this formalisation has benefited India just yet? As it turns out, not so much in the short-term.

While demonetisation resulted in a statistically significant increase in the number of individuals filing taxes, the Economic Survey also notes that “in many cases”, the new filers reported an average income close to the tax threshold of Rs 2.5 lakh, thus “limiting the early revenue impact.”  Or in other words, demonetisation saw a bump in the number of people paying taxes, but a majority of these people are earning so little they don’t go past the minimum exemption limit.

In the case of new enterprises entering the GST system, the survey also notes most of these firms aren’t engaged in business-to-consumer transactions, but instead do transactions in what is called the business-to-business (B2B) sector and exports. It also acknowledges the new tax system’s poor implementation, noting that “uncertainty will not be definitively lifted until the GST stabilises later this year”.

The Economic Survey also uses new GST data to examine the state of formal employment in the country and finds that India may have been under-estimating this all along. In short, it notes, nearly 30% of India’s non-farm workforce (24 crore or 240 million) have some form of social security coverage (through EPFO/ESIC) and that nearly 50% of that non-farm workforce is currently employed in firms that now pay taxes.

“Notwithstanding the caveats regarding the specific numbers, the broad conclusion is likely to be robust: formal payrolls may be considerably greater than currently believed,” the survey notes.

The same chapter also touches on a recent phenomenon – the financialisation of savings – in particular examining how the Indian stock market has soared in the last two years in large part due to the popularity of mutual funds.

The downsides and implications of these two developments aren’t that clear though.

Firstly, by examining the state of formal employment through payroll reporting, the chief economic adviser has ever so slightly waded into a recent debate over the creation of jobs in India. A recent study, which examined the EPFO database, looked at the number of new registrations and inferred that this amounted to an equal number of new jobs being created. The Economic Survey makes no such claims, apart from saying India may have been under-counting the state of formal employment in the country. This leaves the overall survey’s analysis on job creation wanting.

To his credit, Subramanian notes that the India’s policy agenda for the next few years absolutely has to include “finding good jobs for the young and burgeoning workforce” and also points out that the real estate and construction sector “will create over 15 million jobs over the next five years.”

Secondly, the booming of India’s stock markets, due to the financialisation and formalisation of savings, as the survey itself notes has been underpinned by demonetisation and not economic growth in itself.

“The government’s campaign against illicit wealth over the past few years—exemplified by demonetisation—has in effect imposed a tax on certain activities, specifically the holding of cash, property, or gold,” the survey notes.

“Cash transactions have been regulated; reporting requirements for the acquisition of gold and property have been stiffened…all of this has caused investors to re-evaluate the attractiveness of stocks. Investors have accordingly reallocated their portfolios toward shares, with inflows through stock mutual funds, in particular, amounting in 2016-17 to five times their previous year’s level.”

Why does greater formalisation matter and why should the country’s most vulnerable be interested in its outcome? For one, formalisation should ideally lead to greater government revenue, which in turn should provide more fiscal elbow room for public investment in the social  and agriculture sector.

The survey grudgingly admits that in a developing economy like India, there simply isn’t enough fiscal space to “increase the expenditure on critical social infrastructure like education and health in India”.  Crucially it points out that over the last four years, expenditure on social services has largely stayed the same:

“Public investment in social infrastructure like education and health is critical in the development of an economy. However, the expenditure on social services by the Centre and States as a proportion of GDP has remained in the range of 6 per cent during 2012-13 to 2014- 15. There has been a marginal decline to 5.8 per cent in 2015-16 which has further moved up to 6.6 per cent in 2017-18 (BE). It notes that, traditionally, “successful economic and social transformation” has almost always happened against the background of “rising agricultural productivity”.

In India, it appears as if this is especially true. “In the last four years, the level of real agricultural GDP and real agriculture revenues has remained constant, owing in part to weak monsoons in two of those years,” the survey states. Real revenue, as the graph above shows, is a proxy for real farmer incomes. In other words, farmer incomes have largely remained the same over the last few years. As The Wirehas reported and analysed, this is particularly damaging as input and production costs have increased substantially.

The survey however doesn’t fully examine this line of thought, as pointed out by multiple analysts, and instead goes on to devote a chapter to the separate (though also immensely important) issue of the effect of climate change on crop production. According to the Subramanian’s calculations, farmer income losses from climate change “could be between 15 percent and 18 percent on average, rising to anywhere between 20 percent and 25 percent in unirrigated areas”.

“These are stark findings, given the already low levels of incomes in agriculture in India. Even more worryingly, it is possible that the estimates arrtived at in this chapter might be lower than the true effects of climate change, given the potentially non-linear impact of future increases in temperature,” it says.

The question that should be asked, but isn’t, is how the Modi government’s goal of doubling farmer incomes by 2022 is possible. The survey’s policy prescription doesn’t say what can be done, instead merely going on to state that “radical follow-up action” is needed if its “laudable objective of addressing agricultural stress” is to be addressed.