This proposed mother-of-all schemes will mitigate the adverse economic effects of lockdown in the following ways.

A view of the deserted Badi Chaupad in the wake of the coronavirus pandemic, in Jaipur, March 19, 2020. Photo: PTI

What will be the effect of a coronavirus-induced lockdown, even partial, on India’s economy and households in particular?

One way to understand the effects of a lockdown is to look at the counterfactual. In this case, it would be: what happens when we place money in the hands of households?

Suppose a new car manufacturing plant is established in a city and creates a thousand jobs. A thousand workers will get salaries and a large part of that will be spent within the city on housing, food, clothing, entertainment and other items. New companies will be established to meet the additional demand of the 1,000 workers or existing companies supplying food, clothing, etc. will ramp up their requirement of materials, labour, capital and so on, thus, creating more jobs and income for city dwellers.

This happens because households spend some part of their income on consumption of locally produced goods. Thus, a chain reaction is set in motion and there is a round by round multiplying effect, leading to a virtuous cycle.

The effect of the novel coronavirus on economic activities will be the opposite and the contra-effects will generate a vicious cycle. The contra-effects are loss of income, possibly, employment, reduced opportunities to spend the available money, increased outflow on health-related expenditure, and so on. The challenge is to reduce the adverse effects of the vicious cycle on the poor and vulnerable.

This will require placing money in the hands of the households and increasing opportunities to rebuild livelihoods in the medium term. There are several schemes of the Centre and state governments, including some that give money directly to beneficiaries.

We are seeing a few state governments take the lead in this matter. The Uttar Pradesh government has promised cash transfers to daily wage labourers, while the Odisha government will give three months worth of rations over the next two weeks.

The economic ill-effects of COVID-19 can be quickly mitigated if all these schemes are amalgamated into one mother scheme consisting of two parts – direct cash transfer (e.g. paying Rs 500 to all the poor) and conditional cash transfers (e.g. additional Rs 300 for children regularly attending school or give goods instead of cash).

While the direct cash transfer will place some money with all households, the conditionalities will achieve other specific objectives in the medium-term. These include:

2)  Dealing with different types of risk

4) Developing markets for products and services

Such combinations of direct and conditional cash transfers are widely practiced, especially in Latin America. The Mexican government started the Oportunidades in 1997 (then called Progresa) to replace traditional supply side subventions with demand side interventions through direct cash transfer to poorest families with conditionalities, such as enrollment of children in schools and participation in health check-ups. Evaluation of the Mexican programme has showed that most important reductions in poverty took place among the poorest households. 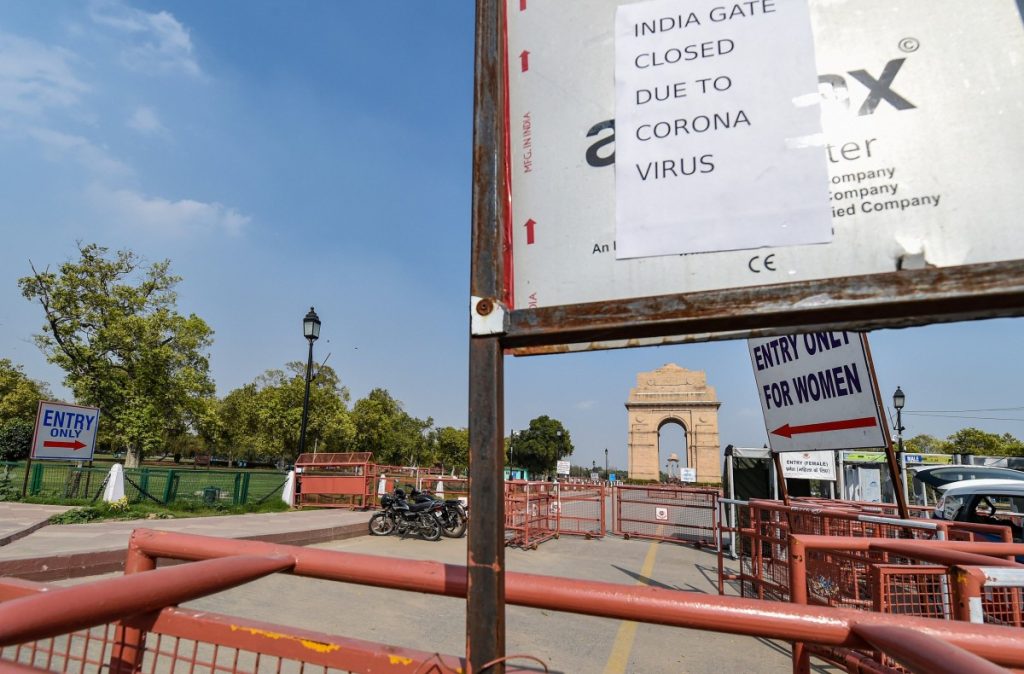 A notice put up at a barricade which says that India Gate has been closed to prevent mass gathering of tourists, March 19, 2020. Photo: PTI/Arun Sharma

Additionally, efficiency of conditionalities was assessed by Coady and Parker (2001), who compared subsidising education by bringing the poor to the educational system, through conditional cash transfer vs. bringing education to the poor through extensive expansion of the educational system. The cost-effectiveness ratio of extensive expansion of school system was nearly 7.3 times greater. Later, Coady and Harris (2004) found substantial general equilibrium welfare impacts by switching to a better targeted direct cash transfer scheme.

Also read: With RBI Choosing to Wait, Govt Must Act to Blunt a Coronavirus Economic Blow

Brazil has several cash transfer programmes. The BPC is a Continuous Cash Benefit Program that transfers cash, unconditionally, to the extremely poor with disabilities; the PETI transfers cash to eradicate child labor from hazardous and dangerous activities; the Bolsa Familia is the main conditional cash transfer program targeting poor families with income less than $40; the Bolsa Escola targets children between six and 15 years of age; the Bolsa Alimentacao fights infant mortality in poor families; the Auxilo Gas compensates poor families after ending food subsidies in 2001; and the Cartao Alimentacao was created to provide food security to the poor in 2003.

A UNDP (2006) evaluation found favourable impacts of the BPC and Bolsa Familia programmes on equality – the Gini inequality coefficient had fallen by 28% during 1995 and 2004.

The proposed mother-of-all schemes will mitigate the adverse economic effects of lockdown in the following ways.

First, the outflow of capital from productive activities to meet domestic shocks and stresses (e.g. serious health ailments) will be reduced. Second, the magnified effects of the vicious cycle on agriculture and livelihoods will be mitigated as well as counterbalance the reduction in demand for local goods and services. Moreover, the flexible and fungible nature of money will facilitate engagement of the poor in productive enterprises. Third, this model will be less costly to administer and less prone to corruption. Fourth, the adverse effect on the most vulnerable, such as women and the aged will be reduced.

Finally, choices available to the poor will be increased empowering them to cope with the spiralling side- and after-effects of coronavirus.

Sameer Sharma is a PhD from USA and a DLitt from Kanchi University. The article is based on his research and practice and views are personal.