Though businesses in the capital were negatively affected by demonetisation, a survey showed, many continue to see the move as positive. 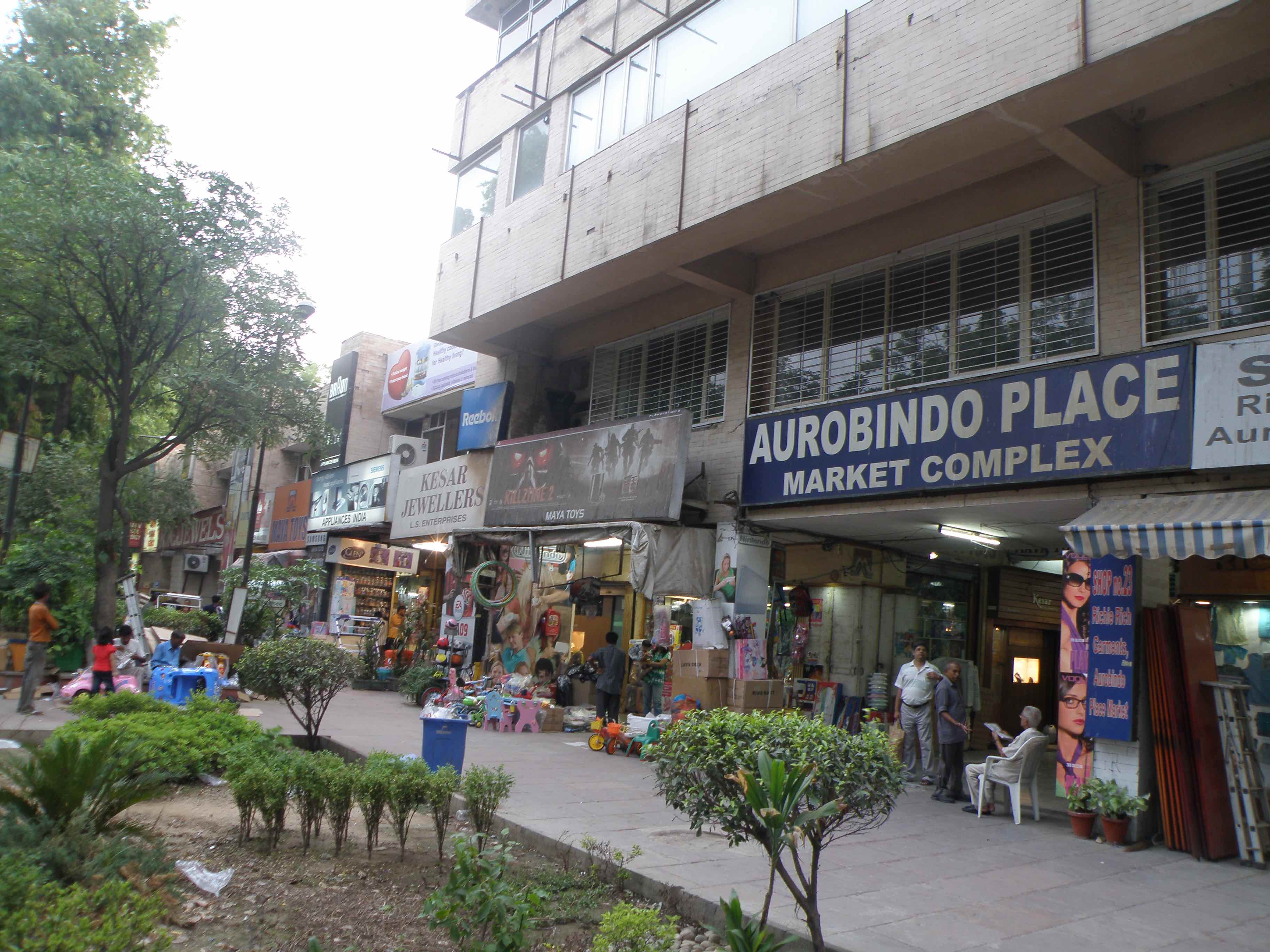 Aurobindo Place market, one of the sites of the survey. Credit: Wikimedia Commons

Though businesses in the capital were negatively affected by demonetisation, a survey showed, many continue to see the move as positive.

Aurobindo Place market, one of the sites of the survey. Credit: Wikimedia Commons

The prime minister’s decision to discontinue Rs 500 and Rs 1000 notes has widely been portrayed as a bold decision. Multiple benefits, including the removal of black money, abatement of terrorism funding and a positive ‘disruption’ towards a digitised and cashless society, have been part of the government’s explanation for the move. However, demonetisation has been widely questioned by economists and other scholars, both in principle and implementation.

A survey of nearly 700 people in Delhi shows that those bearing the cost of demonetisation have suffered on two counts: decreased earnings and pains associated with liquidity crunch.

In mid-January 2017, as part of their coursework, students of IIT Delhi interviewed more than 600 traders from the formal and informal sectors in several South Delhi markets, including SDA market, Nehru Place, Green Park market, Aurobindo market, Hauz Khas market, Yusuf Sarai market, Katwaria Sarai and others. The respondents were questioned on two themes. The first was change in economic activity due to the reduced availability of cash. Traders were asked about the magnitude of decrease/increase (in most cases, a reduction) in earnings post demonetisation. The second was foregone business and time spent in bank and ATM queues. The survey also included a smaller sample of labourers (80 people) who were asked about the availability of work and the timeliness of daily wages. Finally, both traders’ and labourers’ views were recorded on whether they felt demonetisation was a good policy decision.

Although there is no claim regarding the representativeness of the sample (we did not have a list of businesses to select a random sample from), there was an attempt to diversify the interviewed businesses.

A possible bias might have crept into our sample due to the two-and-a-half month interval between demonetisation and the survey. Most people may have reconciled themselves to the changes and their views might have become more moderated by the time of the survey. On the other hand, as the survey included only people who were readily willing to be interviewed, we may have a sample which has rather extreme views (either ardent supporters or staunch critics).

Apart from some reluctance in sharing information on incomes (44% traders revealed their earnings) and/or on account of being busy during the business hours, most respondents had no trouble answering the questions asked. 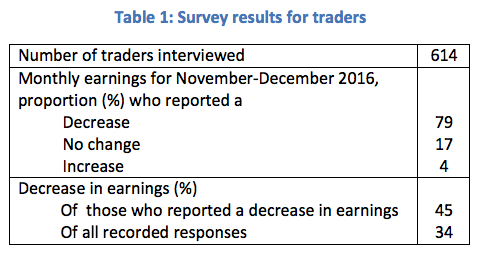 The data show that on an average, there has been a decline of 34% in earnings across all interviewed traders. The divergence between top 20% earners, who witnessed a 17% dip in earnings, and bottom 80% earners (who saw a 31% dip), suggests that the smaller traders were hit hardest, in some instances taking them below the basic sustenance income levels. For instance, a juice seller near Begumpur Mosque said that he couldn’t earn enough to even pay his rent. He was forced to return to his village to avoid rental expenses in Delhi.

These results are similar to earlier surveys based on smaller samples, which showed economic slowdown and increased people’s sufferings due to the liquidity crunch. An average decline of 45% was revealed by interviews conducted using the same questionnaire in Ranchi and Amritsar. A survey covering more than 200 families in the slums of Mumbai showed an average decline of 10% in monthly incomes. Another survey in four villages and slums of Delhi revealed an average decline of 60% in earnings after demonetisation. The occupations of the earning members of the family had huge roles to play in the magnitude of decline; in Mumbai slums, the dominant occupation is a service job, whereas in other surveys, most respondents were traders and daily-wage labourers. The former is typically a more stable income source. 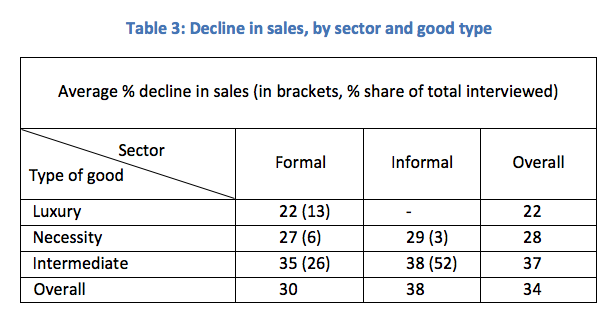 In Table 3, the interviewed businesses are categorised into formal-informal markets and the goods into luxury, necessities and intermediate goods. Formal sector respondents were 45% of the sample (fast food chains, branded apparel stores, stationeries, hardware shops, cosmetics shops) and the rest were informal sector enterprises (chaiwalas, andewalas, paanwalas, juice centres). The businesses interviewed also covered a range of goods – daily needs such as vegetables, groceries, general stores, pharmacies; necessities like jewellery, branded apparel and electronic goods in malls; and a wide range of intermediate goods such as stationery, restaurants, street food sellers, fruit vendors, florists, potters, paint sellers, repair shops and so on. Businesses dealing in necessities were about 9% of the respondents in the sample, luxuries were 13% and the bulk (78%) comprises what we have termed intermediate goods.

Table 3 shows that the informal sector is hit more, with a decline of 38% as compared to 30% in the formal sector. The pattern is observed across types of goods (both necessities and intermediate goods). This is another indicator of poor preparedness for such a disruption, in a country with a dominant informal sector.

Contrary to the expectation that necessities would be hit the least, these businesses took a big hit with a 28% reduction in sales, while the luxury goods’ market (with a 22% dip) seems to drift more comfortably post demonetisation. The expenditure of people shopping at malls, eating at fine-dines and buying jewellery have been affected the least. Perhaps this is due to most transactions there being non-cash based or a switch to cashless systems being easy. Comparatively speaking, those yearning for basic needs such as vegetables and groceries had to give up consumption, illustrating the possible inequality-exacerbating effect of the policy. Businesses dealing in intermediate goods (stationery, restaurants, street food sellers, fruit vendors, florists, potters, paint sellers, repair shops), or the so called ‘luxury goods of the poor’, have been hit the hardest. This is expected because when there is a liquidity crunch and people are already facing trouble meeting their basic needs, they would delay the buying of their ‘luxury goods’. Rakesh, the owner of a small DVD and pen drive shop in Green Park, decided to wrap up the business permanently due to zero sales post demonetisation. Handicrafts and furniture sales stores have also seen dips as drastic as 95%.

Queuing times received significant media attention in the two months post demonetisation, during which various instances of inconvenience of people – even violence and deaths, in some cases – were reported. In our sample, the respondents stood for a total of about 28 hours in (bank and ATM) queues in the 2.5 months after demonetisation. Apart from the physical pain and business lost, personal circumstances made matters worse. Gaurav, a momo seller in the PVR Anupam complex, had a wedding in his family on November 16. He was very troubled as he had to stand in queues for about 70 hours to manage the finances. 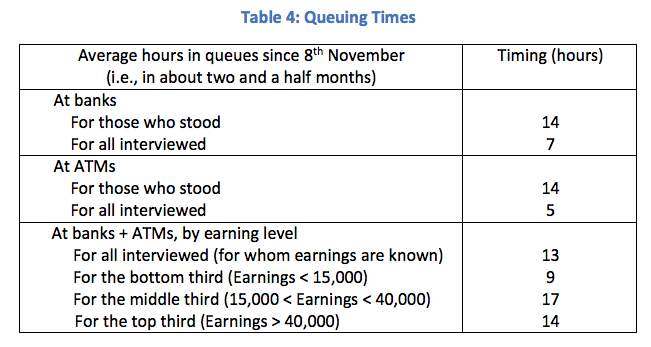 Table 4 also brings in the class consideration on the queuing times by showing the dependence of total hours spent in queues on the incomes of traders. The sample (for which earnings were recorded) was sectioned into three income slabs with equal number of people. For the bottom third, the time spent in queues is four hours less than the overall average, primarily due to the fact that these traders haven’t ever had enough cash to be deposited. Many of them either didn’t have any bank accounts/ATM cards or had zero-balance accounts. In Khirki Extension market, a cobbler Suresh admitted that for many years now, he had been living on his daily earnings for fulfilling the day’s necessities, never feeling the need (as there wasn’t enough money) for saving in a bank. Thus he didn’t have to suffer from any bank/ATM-related issues.

The middle third had to stand the queues for the longest time (four hours above the overall average) whereas the top third stood for 14 hours (one hour more than the overall average). At many points in the survey, the poor ones reported their observation of seeing no rich people in the bank queues. Having influence and contacts in banking systems, using man-servants/start-ups for these laborious activities (like bookmymchotu.com), special counters and pick-up services, openness to/prior access to cashless forms of payments are some recorded reasons could explain this.

A direct implication of demonetisation was the reduced timeliness of monthly wages, captured in Table 5.

The final element of the survey was related to people’s perceptions about demonetisation. We asked, “Overall, do you think that demonetisation was a good idea or a bad idea?” Despite the absence of any theoretical backing and mass hardships it has resulted in, the public support for demonetisation is vast (57% approve of it). A quarter (26%) thought it was a bad move and 17% were unclear. Khari Singh, a fruit seller in Green Park, said that he faced a lot of difficulties as he lived on daily wages and his business dropped tremendously. With moist eyes, he said that there was little money for food and medicines for his ill children. But he still felt that this is a fight against black money and it is one that is worth fighting.

It is striking as to how the support for demonetisation cannot be taken as evidence that people have not been hit. On the contrary, each time the same pattern emerges – large numbers of people have been hit badly and yet many support the move. Reetika Khera has discussed the reasons for this divergence between the facts and people’s beliefs. Among possible reasons for it, she highlights successful propaganda and the lack of a credible political opposition.

Though a majority of respondents were in favour of demonetisation, what they feel about it has been a function of what they have personally gone through.

In terms of the foregone business due to standing in ATM and bank queues, among the people who have suffered most from it (the ones who have stood more than the average queuing time), 42% have felt it to be a bad policy decision as compared to the 40% who felt it was good. This is significantly different from the overall average of 57% being in favour of it as compared to only 26% perceiving it as bad. Similarly, 38% of the ones who have seen greater decrease in earnings (compared to the average) felt it was a bad decision. 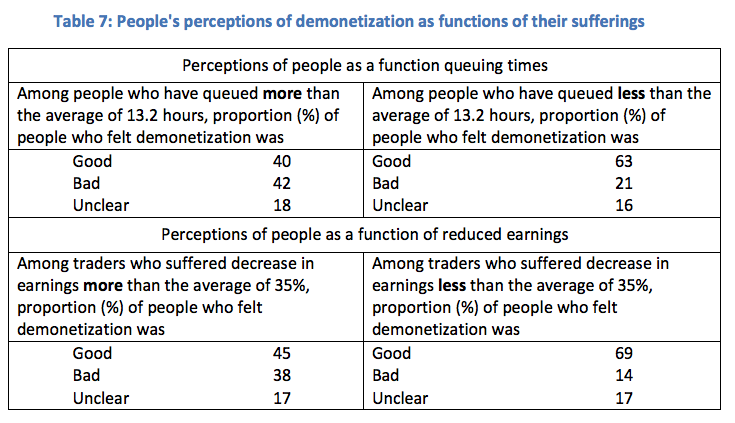 The negative effects of demonetisation have been felt, in some magnitude or the other, across all traders and consumers. The data here suggest that economic status of the respondents determines the hardship experienced along with other social, economic and cultural factors (influence in banks, type of good traded, locality of operation, scale of business, family structure, back-up availability and many more). Based on the data we have collected, the following tentative assertions can be made:

Demonetisation, this study has revealed, without any visible benefits so far has, hurt the already deprived.

The author would like to thank Reetika Khera (IIT Delhi) for guidance and discussion. Thanks to the participants of ‘Introduction to Economics’ (Spring ’17, IIT Delhi), including Asmita Verma and Rituparna Kaushik for conducting the interviews and other help.

Rishabh Malhotra is a BTech student at IIT Delhi.