The Pandemic is Changing the Face of Indian Labour

Should the erosion of worker rights come without debate? Why are state governments and businesses leading the charge, using COVID-19 as a shield? Labour Day is typically meant to highlight the protection of worker rights. This year, it came at a time when labourers are struggling to survive and their rights need protection more than ever. The heart-rending death of 16 workers who were sleeping on rail tracks, exhausted during their 700 km walk to home highlights the plight of workers today.

In the US, more than 33 million people have lost their jobs in the past 7 weeks. This is already more than the loss in employment seen in the two years of the global financial crisis.

Back home, where workers have little social security, CMIE data suggests that more than a hundred million workers have lost employment, a vast majority from the unorganised sector. The figure is likely to be even larger given that it would be difficult to capture the employment status of the migrating workers.

Workers are desperate. Not only have they lost their meagre income, but now their only options are to risk contracting COVID-19 or facing starvation. So, many of them set out to walk hundreds if not thousands of kilometres to return to their villages, carrying their few belongings, children on their shoulders and no food in their bellies. Some have already perished on the way. In Karnataka, they were not even being allowed to go back home, in a controversy that sparked allegations of bonded labour, forcing the government to quickly take a U-turn.

The pandemic has highlighted the real working and living conditions of most workers. The unfolding crisis does make one stop and wonder – how can this be the situation of most Indian workers, 70 years after independence?

True, conditions are not what they were in 1947. There is more education and better health facilities. Child mortality has dropped and longevity has increased. Many of the poor own mobile phones and wear chappals. Electricity and tapped water have reached many villages. But this is expected in an economy where GDP has grown by 32.2 times and per capita income by 8.2 times since 1950, as some fruits of development trickle down to some of the marginalised. 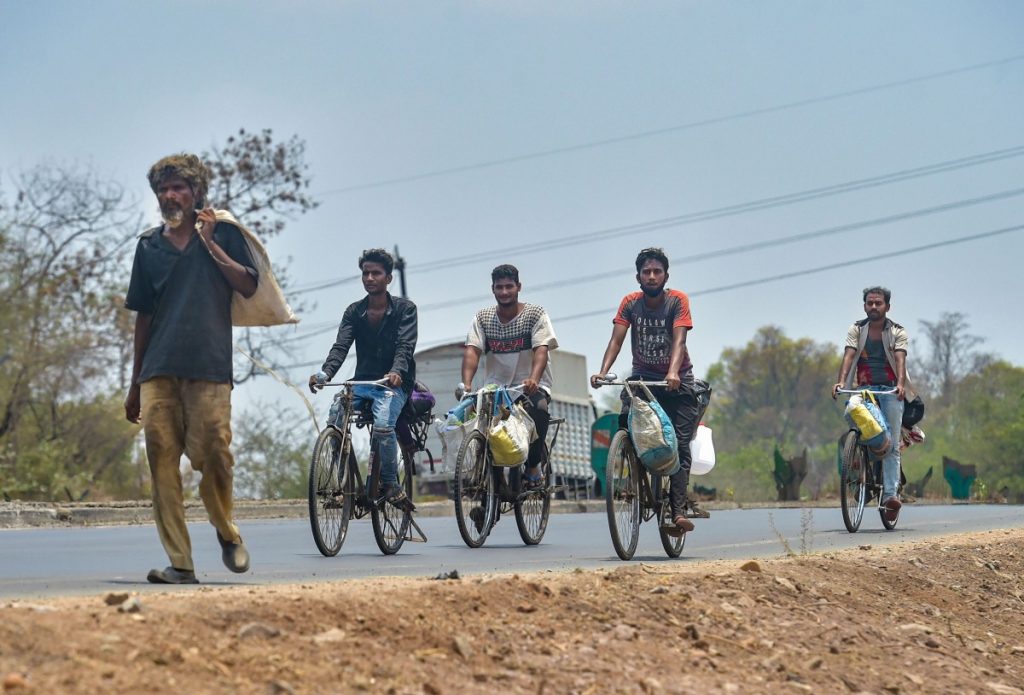 Migrants with their belongings ride on bicycles on the Mumbai-Nashik highway on Friday, May 1, 2020. Photo: PTI/Mitesh Bhuvad

What is missing though is a dignified life which should be the right of every citizen in a democratic country. The ruling class often ignores this and argues that the marginal improvement in the material conditions of many workers is enough. They even imply that the workers ought to be grateful for this slight betterment and portray it as the success of the prevailing unequal economic system. In the present ruling economic ideology, equity is not high on the agenda.

The ruling elites thrive on the poor working and living condition of labour for their lifestyle and profits. Consequently, neither the state nor the businesses grant the workers their rights. For instance, large numbers do not get a minimum wage or social security or protective gear at worksites. They do not have security of employment, often wages are not paid in time, muster rolls are fudged, there is no entitlement to leave, etc. Given their low wages, they are forced to live in squalid conditions with many sharing a small room in a slum. Water is scarce and drinking water more so. Access to clean toilets is limited and disease spreads. There is lack of civic amenities like sewage. Their children are often deprived of schools and playgrounds.

With COVID-19 as an excuse, state after state is reducing what little security was available to workers by eliminating or diluting various laws so as to favour businesses. In Uttar Pradesh, at least 14 labour laws like the Minimum Wages Act and Industrial Disputes Act are being suspended for three years in an effort to attract capital. Similar is the case with MP and Gujarat. The plea is that this is needed to revive economic activity. The chief minister of MP has said that this would lead to new investment in the state. Whether or not new investment will come at this time when businesses are unable to start or they face a situation of low capacity utilisation, what this would ensure is competition among states to relax and eliminate labour laws. Thus, the poor working conditions of labour will deteriorate further.

In India, workers are characterised as either organised or unorganised. Those in the former category work in larger businesses and have some formal rights (which are being diluted further) but often they find it difficult to enforce them. Increasingly the big and medium businesses are employing contract labour provided by contractors from the unorganised sector, rather than permanent workers. Businesses pay the contractors who then pay workers a part of the payment they receive. So, businesses claim that they are paying the minimum wage but the workers don’t get it. When even the minimum wage is inadequate for a dignified life, what the workers receive cannot ensure a civilised existence. Most workers in the cities, where land prices and rents are high, are forced to live in slums mushrooming on vacant land or in urbanised villages with rudimentary facilities and massive overcrowding. Dharavi is an example of this. Health workers during a house-to-house health survey at Koliwada, Mumbai, May 8, 2020. Photo: PTI

SARS CoV-2, the virus that causes COVID-19, spreads rapidly. Since neither a medicine nor a vaccine against it is available, a lockdown of the population is essential to slow its spread. But lockdown requires isolation and sanitation, which are not possible in congested areas in slums. Frequent washing of hands is required but how is that possible without clean water or soap? So, the miserable living conditions of a large number of workers have been sharply highlighted.

If 5-10 people live in a room, how is isolation 24×7 feasible? Without physical isolation, the disease is bound to spread, as is the case in Dharavi. Further, they do not have the money to get tested or go to a hospital for treatment, so it festers. They are also poorly nourished so their resistance to the disease is less. They often have comorbidities which makes them more susceptible to the disease.

A lockdown requires businesses to close and lay off workers or not pay them wages. This again highlights the insecure working conditions of workers. The workers have small incomes and little savings so they cannot stock up on essentials of life to survive weeks of lockdown. They, and if their family is with them, start to starve unless someone provides them with food.

So, while a lockdown works for the middle classes and the well-off sections, it is next to impossible for the poor unless the state steps in and makes arrangements. There has to be free testing and hospitalisation, provision of essentials of life and clean water wherever the workers are. Furthermore, slums need to be decongested and some moved to tented colonies in vacant grounds,  empty school buildings, halls, etc.

Also Read: The Centre Cannot Get Away With Ignoring Migrant Workers Completely

So, the prerequisites for a successful lockdown were not put in place quickly enough. Consequently, the lockdown has been only partially implemented, allowing the disease to spread. More cases are being discovered as testing is enhanced. The implication is that the disease has been spreading without our knowing it. Many zero case districts may not be so. Some reports indicate that in a few districts, the number of deaths is much larger this April than last year but the cause is not known.

Businesses want the lockdown to end so that they can restart and if not earn profits, at least start cutting their losses. This is being presented as the trade-off between life and livelihood. They argue that workers without work and incomes will die of hunger. They also argue for ‘herd immunity’ – when the majority will develop immunity to the disease – saying it is inevitable. But how many will die in this process? The UK experimented with herd immunity but, as the number of cases and deaths spiralled, policy had to be reversed. They now have the largest number of deaths in Europe.

In India, even if 3% of the infected people die, it would mean thousands or lakhs of lives lost, depending on how many people are infected. It will quickly overwhelm our weak health infrastructure. Are we prepared for this and for the social upheaval that will follow?

Those who now worry about livelihoods have never shown such concern for the workers in normal times. They have paid low wages to earn big profits. How else, at such a low level of per capita income, India had the fourth-largest number of billionaires in the world? Clearly, most of the gains of development, in the last 75 years and more specifically since 1991, have been cornered by businessmen – by hook and by crook. They have made money not only in white but huge sums in black. A man rides on a horse cart during the ongoing nationwide COVID-19 lockdown, in New Delhi, May 8, 2020. Photo: PTI/Kamal Kishore

Businesses have manipulated policy in their favour – before 1991, by resorting to crony capitalism and since then by tilting policy in their favour, curtailment of workers’ rights and pressuring the government to weaken support to the marginalised sections on the plea that the markets should be allowed to function. Now using COVID-19 as a shield, workers’ rights are being further curtailed. No wonder, the country collects only 6% of GDP as direct taxes in spite of the huge disparities. The burden of taxation falls on the indirect taxes which are paid by everyone, including the marginalised.

It is clear that businesses asking for lifting of lockdown in the name of livelihood are not concerned about how many poor will die but, as usual, about their profits. They did not worry about people, workers and farmers earlier and not even now, otherwise they would have asked for a better implemented lockdown and a ‘survival package’ which would have protected the lives of the marginalised sections.

The lesson that should have been learnt is that India was unable to cope with the pandemic because of the adverse living conditions of the majority of our people. And now, labour laws are being diluted which will ensure a worsening of living conditions. This will ensure that when the next pandemic comes in due course the country will flounder. The tragedy is that India is today headed towards a societal breakdown for short term gains of some. But, a basic rethink of any current ruling ideology is always at a heavy cost.