In a joint op-ed, leading academics around the world say we need to heed the lessons of the coronavirus crisis and rewrite the rules of our economic systems in order to create a more democratic and sustainable society. 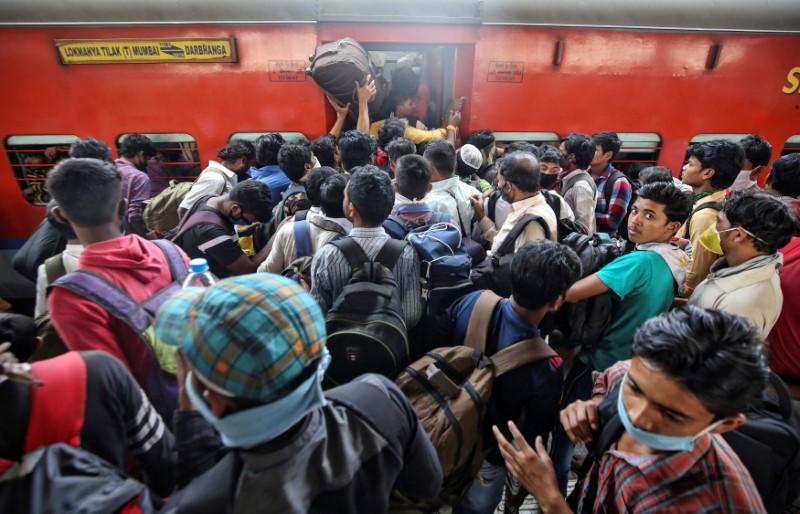 Migrant workers and their families board an overcrowded passenger train, after government imposed restrictions on public gatherings in attempts to prevent spread of coronavirus, in Mumbai, March 21, 2020. Photo: Reuters/Prashant Waydande

More than 3,000 researchers from 600 universities around the world have issued an urgent call to heed the lessons of the COVID-19 crisis and rewrite the rules of our economic systems in order to create a more democratic and sustainable society. Their call – made in an op-ed published simultaneously in 33 leading media outlets around the world, including The Wire – in the midst of an unprecedented health, climate, and political crisis, paves a positive path forward following three core principles: democratise (firms), decommodify (work), and remediate (policies) in order to respect planetary boundaries and make life sustainable for all.

Working humans are so much more than “resources.” This is one of the central lessons of the current crisis. Caring for the sick; delivering food, medication, and other essentials; clearing away our waste; stocking the shelves and running the registers in our grocery stores – the people who have kept life going through the COVID-19 pandemic are living proof that work cannot be reduced to a mere commodity. Human health and the care of the most vulnerable cannot be governed by market forces alone. If we leave these things solely to the market, we run the risk of exacerbating inequalities to the point of forfeiting the very lives of the least advantaged. How to avoid this unacceptable situation? By involving employees in decisions relating to their lives and futures in the workplace – by democratizing firms. By decommodifying work – by collectively guaranteeing useful employment to all. As we face the monstrous risk of pandemic and environmental collapse, making these strategic changes would allow us to ensure the dignity of all citizens while marshalling the collective strength and effort we need to preserve our life together on this planet.

Why democratize? Every morning, men and women, especially members of racialized communities, migrants and informal economy workers, rise to serve those among us who are able to remain under quarantine. They keep watch through the night. The dignity of their jobs needs no other explanation than that eloquently simple term, ‘essential worker.’ That term also reveals a key fact that capitalism has always sought to render invisible with another term, ‘human resource.’ Human beings are not one resource among many. Without labor investors, there would be no production, no services, no businesses at all.

Every morning, quarantined men and women rise in their homes to fulfil from afar the missions of the organizations for which they work. They work into the night. To those who believe that employees cannot be trusted to do their jobs without supervision, that workers require surveillance and external discipline, these men and women are proving the contrary. They are demonstrating, day and night, that workers are not one type of stakeholder among many: they hold the keys to their employers’ success. They are the core constituency of the firm, but are, nonetheless, mostly excluded from participating in the government of their workplaces – a right monopolized by capital investors.

To the question of how firms and how society as a whole might recognize the contributions of their employees in times of crisis, democracy is the answer. Certainly, we must close the yawning chasm of income inequality and raise the income floor – but that alone is not enough. After the two World Wars, women’s undeniable contribution to society helped win them the right to vote. By the same token, it is time to enfranchise workers.

Representation of labor investors in the workplace has existed in Europe since the close of WWII, through institutions known as Work Councils. Yet, these representative bodies have a weak voice at best in the government of firms, and are subordinate to the choices of the executive management teams appointed by shareholders. They have been unable to stop or even slow the relentless momentum of self-serving capital accumulation, ever more powerful in its destruction of our environment. These bodies should now be granted similar rights to those exercised by boards. To do so, firm governments (that is, top management) could be required to obtain double majority approval, from chambers representing workers as well as shareholders. In Germany, the Netherlands, and Scandinavia, different forms of codetermination (mitbestimmung) put in place progressively after WWII were a crucial step toward giving a voice to workers – but they are still insufficient to create actual citizenship in firms. Even in the United States, where worker organizing and union rights have been considerably suppressed, there is now a growing call to give labor investors the right to elect representatives with a supermajority within boards. Issues such as the choice of a CEO, setting major strategies, and profit distribution are too important to be left to shareholders alone. A personal investment of labor; that is, of one’s mind and body, one’s health – one’s very life – ought to come with the collective right to validate or veto these decisions.

Why decommodify? This crisis also shows that work must not be treated as a commodity, that market mechanisms alone cannot be left in charge of the choices that affect our communities most deeply. For years now, jobs and supplies in the health sector have been subject to the guiding principle of profitability; today, the pandemic is revealing the extent to which this principle has led us astray. Certain strategic and collective needs must simply be made immune to such considerations. The rising body count across the globe is a terrible reminder that some things must never be treated as commodities. Those who continue arguing to the contrary are imperilling us with their dangerous ideology. Profitability is an intolerable yardstick when it comes to our health and our life on this planet.

Decommodifying work means preserving certain sectors from the laws of the so-called “free market;” it also means ensuring that all people have access to work and the dignity it brings. One way to do this is with the creation of a Job Guarantee. Article 23 of the Universal Declaration of Human Rights reminds us that everyone has the right to work, to free choice of employment, to just and favorable conditions of work and to protection against unemployment. A Job Guarantee would not only offer each person access to work that allows them to live with dignity, it would also provide a crucial boost to our collective capability to meet the many pressing social and environmental challenges we currently face. Guaranteed employment would allow governments, working through local communities, to provide dignified work while contributing to the immense effort of fighting environmental collapse. Across the globe, as unemployment skyrockets, job guarantee programs can play a crucial role in assuring the social, economic, and environmental stability of our democratic societies. (VAR. EUROP) The European Union must include such a project in its Green Deal. A review of the mission of the European Central Bank so that it could finance this program, which is necessary to our survival, would give it a legitimate place in the life of each and every citizen of the EU. A countercyclical solution to the explosive unemployment on the way, this program will prove a key contribution to the EU’s prosperity.

Environmental remediation. We should not react now with the same innocence as in 2008, when we responded to the economic crisis with an unconditional bailout that swelled public debt while demanding nothing in return. If our governments step in to save businesses in the current crisis, then businesses must step in as well, and meet the general basic conditions of democracy. In the name of the democratic societies they serve, and which constitute them, in the name of their responsibility to ensure our survival on this planet, our governments must make their aid to firms conditional on certain changes to their behaviors. In addition to hewing to strict environmental standards, firms must be required to fulfil certain conditions of democratic internal government. A successful transition from environmental destruction to environmental recovery and regeneration will be best led by democratically governed firms, in which the voices of those who invest their labor carry the same weight as those who invest their capital when it comes to strategic decisions. We have had more than enough time to see what happens when labor, the planet, and capital gains are placed in the balance under the current system: labor and the planet always lose. Thanks to research from the University of Cambridge Department of Engineering (Cullen, Allwood, and Borgstein, Envir. Sci. & Tech. 2011 45, 1711–1718), we know that “achievable design changes” could reduce global energy consumption by 73%. But… those changes are labor intensive, and require choices that are often costlier over the short term. So long as firms are run in ways that seek to maximize profit for their capital investors alone, and in a world where energy is cheap, why make these changes? Despite the challenges of this transition, certain socially-minded or cooperatively run businesses — pursuing hybrid goals that take financial, social, and environmental considerations into account, and developing democratic internal governments– have already shown the potential of such positive impact.

Let us fool ourselves no longer:  left to their own devices, most capital investors will not care for the dignity of labor investors; nor will they lead the fight against environmental catastrophe. Another option is available. Democratize firms; decommodify work; stop treating human beings as resources so that we can focus together on sustaining life on this planet.