Why Are Cesses Meant For Workers' Social Security Being Abolished?

After the government cancelled certain cesses that were meant for labourers' welfare in preparation for the GST, activists suspect that many such moves may be around the corner.

Workers at a construction site on the outskirts of Kolkata. Credit: Reuters/Files 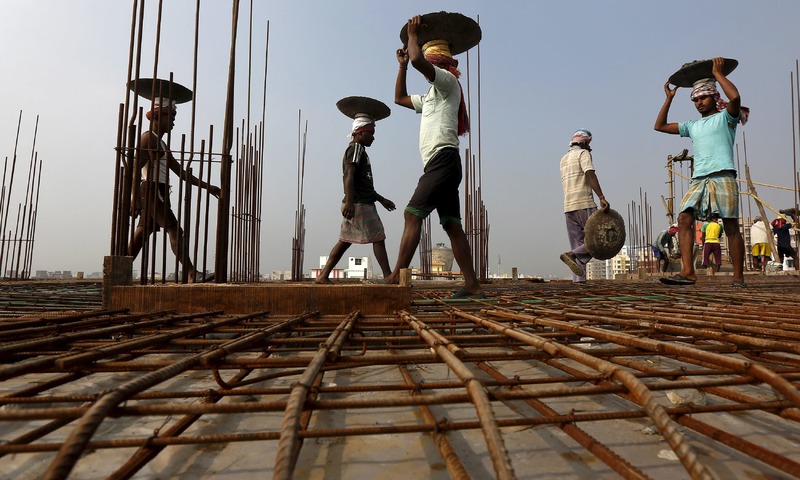 The cess in the construction industry is currently activists’ biggest concern, since it affects the highest number of workers. Credit: Reuters/Files

Assaults on the hard-earned rights of several categories of workers have been on the rise in recent times, evidenced by the cancellation of cesses meant to be utilised for workers’ social security. If left unchecked, such changes can lead to much bigger losses for workers at large and undo any positive changes we have seen in their working and living conditions.

Some MPs have tried to raise the issue. Sharad Yadav, a senior political leader and member of the Rajya Sabha, wrote a letter on March 17 to finance minister Arun Jaitley. “I write this to express my great concern about salt, mica, coal, dolomite, cine, iron ore, manganese and chrome ore workers as welfare cesses being collected for their social security have been cancelled without consulting the trade unions,” he said.

Saying that the removal of these cesses was in preparation for the introduction of the GST, Yadav expressed apprehensions about the possibility of such cesses in the construction and beedi industries also being cancelled, where the number of workers is much higher.

Yadav is not alone in being apprehensive. In Tamil Nadu, representatives of central as well as local unions have got together to form a Joint Action Committee on the GST Bill and the abolition of cesses. This committee organised a seminar on this issue at Chennai on March 2. Speaking at the seminar, R. Geetha of the Federation of Unorganised Workers said that trade unions and workers have been shocked by the likely impact of the GST on the social security of workers. Participants at the seminar expressed their dismay that cesses collected for the welfare of workers in the salt , mica, coal, limestone, dolomite and iron ore sectors have been abolished and hence the welfare schemes for these workers (if they have been retained at all) may be starved of resources. People at the seminar also expressed the need to protect the surviving cesses meant for construction and beedi workers.

The biggest concern is to protect the cess in the construction industry, as this covers the welfare and social security of the largest number of workers. A long battle was fought by workers organised under the National Campaign Committee-Construction Labour (NCC-CL) for a legislation to be enacted that mandated a cess be collected on all construction beyond a certain budget. This cess was to be spent on the welfare and social security of workers under the supervision of a board. The legislation was enacted in 1996, but not implemented properly. The NCC-CL continued to fight in courts for better implementation. Despite the many hurdles, about Rs 36,000 crore has been collected so far at the national level for the welfare of construction workers under this law. And despite the delays in proper utilisation of these funds, thousands of workers and their families have benefited in the form of pensions, scholarships for children and healthcare. It is widely expected that much more can be achieved, especially if the Supreme Court gives an order in favour of the committee in the case before it, on implementation of the legislation.

Activists associated with these campaigns panicked when they received the news of the abolition of cesses for the welfare of a wide range of workers. On July 27, 2016, the finance ministry arbitrarily issued orders to stop the collection of these cesses, but for a long time workers and their representatives were not aware of these orders.

Subhash Bhatnagar, coordinator of the NCC-CL, says that a senior official from the Union labour ministry told him that the cess collected from the construction industry is also likely to be stopped soon. Another official from the same ministry denied this claim. However, worrying about the withdrawal of cesses led Bhatnagar to suffer a heart attack. After a partial recovery and his return from hospital, he has continued his efforts to oppose any move to cancel this cess.

Another factor that worries Bhatnagar is that with the coding of various social security laws, boards of various categories of workers are likely to be brought together. He fears that since it has been very difficult to get the board to play an active role and take interest in ensuring workers’ rights, everything being under one board may lead to further delays and hurdles.

Although all aspects of the upcoming changes are not clear, trade union leaders and activists feel they need to be more assertive about protecting the hard-earned rights of workers. According to them, the collection of cesses and their utilisation needed to be improved, but instead the government is slowly abolishing these cesses without informing or consulting workers.