Can AAP Repeat its Delhi Budgetary Playbook in Punjab?

It will not be a walk in the park. Populist measures will only deteroriate the economic prospects of Punjab. 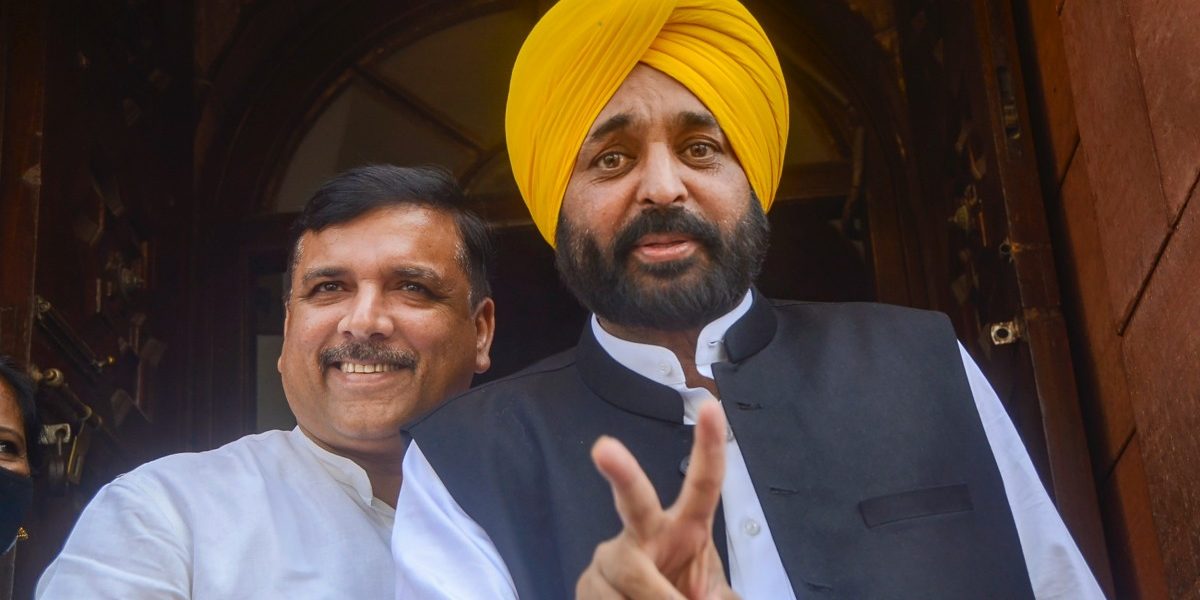 Mumbai: Since its foray into Indian politics, the Aam Aadmi Party has been able to marshal immense support from the citizens of Delhi as far as its policies on subsidised electricity and water supply are concerned. Over the years, the party has taken pains to deliver a comprehensive government service delivery architecture in Delhi that prominently covers education as well as health in its ambit.

AAP’s multifaceted effort at creating a network of mohalla clinics, provision of free tests and surgeries at private sector hospitals, ramping up of school infrastructure while simultaneously ushering meaningful educational reforms have resonated with the people, as is evidenced by the brute majority it managed to hold on to for the second time in the 2020 assembly elections.

In the run-up to the Punjab Legislative Assembly elections, AAP was an underdog that was hoping that its Delhi development model would find takers in the agriculture-dominant state. AAP chief Arvind Kejriwal’s gambit of publicising the Delhi model coupled with door-to-door campaigns paid off for the party as it stormed into the assembly in the recent elections, capturing a domineering 92 seats, raising its seat tally by a whopping 72 seats compared to the previous elections.

Now, with the party firmly in power in Punjab, questions loom over whether the AAP can replay its Delhi model in Punjab. This is far from a walk in the park. AAP has had a respectable track record in budgetary management and none less than the CAG has acknowledged that for five years in a row, AAP managed to run a revenue surplus economy. However, COVID-19 played spoilsport to AAP’s successful run. Finance minister Manish Sisodia admitted as much in his latest budget speech.

As per the revised estimates of total revenue receipts for for FY21, the Delhi government undershot its target of Rs 55,309 crore by 23% effectively earning only Rs 42,444 crore. This point is further substantiated in the granularities of the budget: As per revised estimates FY21 tax-revenue collections fell short by a sizeable 34% clocking in at Rs 29,300 crore instead of the Rs 44,100 crore stated in the budget estimates.

On the other hand, revenue expenditure has shot up by almost 17% between FY20 and FY21 with the FY21 figure of Rs 46,215 crore ballooning to Rs 51,799 crore in FY22. Additionally, capital outlay, the part of capital expenditure that is utilised for creations of assets, has marginally receded from Rs 5,472 crore to 5,415 crore from FY20 to FY21, although Sisodia did clarify in his budget speech that the decrease in capital outlay is due to the slow pace of capital works following the lockdown imposed during the pandemic.

Funds meant for servicing of debt, that is, debt repayment and interest payments have also shot up by almost 11% from Rs 5,563 crore in FY20 to Rs 6,139 crore in FY21, and going by FY22 budget, it is set to rise to Rs 7,599 crore. Meanwhile, loans from the Centre have gone up by an incredible 261%. Borrowings under this label were estimated to be of Rs 4,291 crore in the FY21 budget which subsequently rocketed to Rs 15,500 crore in the revised estimates. Out of this Rs 6,000 crore is estimated to be GST compensation grants. The FY22 budget estimates also have forebodingly large borrowings at Rs 9,285 crore.

However, there are reasons beyond the pandemic which have led to the rise of indebtedness of the Delhi government. Funds that were due to Delhi from the centre under the GST (compensation to states) Act, 2017 have been only been partly paid by the Centre. The Act promises a 14% annual growth in state’s GST revenue failing which the states will receive a compensation from the centre in order to make up for the deficit in their GST collections. This compensation is funded by the GST compensation cess imposed by the Centre.

Also read: Punjab Elections: Half of Winning Candidates Have Criminal Cases; 74% Are Crorepatis

This is where the pandemic delivered a double whammy, firstly to the state GST collections and secondly to the GST compensation cess kitty. The GST compensation cess collection was originally purposed to make up for the deficit suffered as well. With its hands tied, the Centre decided to borrow Rs 1.10 lakh crore from the market in tranches during the second half of 2020-21 and provide them as back-to-back loans to states in lieu of compensation cess for shortfall in their revenue in 2020-21. Later, by October 2021, another Rs 1.59 lakh crore that the Centre raised from the market was passed onto states as loans. Many state chief ministers and finance ministers saw red.

Sisodia voiced his anger thus: “When GST was implemented in 2017 all states were promised a 14% growth rate along with assured revenue for 5 years. However, the central government, in the name of the COVID-19 pandemic, did not fulfil its promise this year, and a loan was provided in place of a compensation. The government of Delhi shall face two challenges in the coming times – the first would be Central government going back on its promise of providing compensation, and the second is the assurance for revenue protection ending on 30 June 2022.”

Now, with the omicron variant receding and the economy getting back on track again, Sisodia will be hoping for the union territory’s revenue receipts to pick up the slack again in order to ensure that AAP’s focus on health, education and utility subsidies doesn’t come at the cost of a rising fiscal deficit.

AAP is in for a tough time from the word go in Punjab. The first major challenge it will have to tackle head on is the prodigious burden of government electricity dues and subsidies. The power subsidy bill as of February 15 was running at over Rs 8,000 crore, not to mention the new estimated power subsidy bill for FY23 which will cost the state exchequer about Rs 14,000 crore. Failure to pay subsidy dues is a legacy issue that AAP will inherit from the Congress, which inherited it from the SAD-BJP government. The SAD-BJP regime left the state discom company, Punjab State Power Corporattion Limited with arrears of Rs 2,342 crore in 2017 which ballooned to almost Rs 10,000 crore under the Congress government by December last year.  How AAP tackles the sticky electricity subsidy and dues burden will be a key litmus test considering that Rs 14,000 crore subsidy bill slated for the next year is close to 10% of state budgeted expenditure of FY22.

Another roadblock in AAP’s way would be the mounting fiscal deficit which in the budget estimates for FY21 was sized up to at Rs 24,240 crore or at 4% of the Gross State Domestic Product but in the revised estimates has been changed to Rs 28,465 crore or 5.26% of the GSDP. The state ran revenue deficit of  Rs 14,284 crore in FY20 and in the next FY this figure grew by a troubling 45% to Rs 20,729 crore.

Also read: Is AAP Set to Replace the Congress as India’s National Opposition?

Another major problem that will challenge AAP when it attempts to revive the sinking economic fortunes of the state will be the crippling amount of debt Punjab finds itself under. For FY22, its total effective outstanding debt is expected to touch the mark of Rs 2.73 lakh crore.

In fact, as per an annual RBI publication on state budgets, by this March end, Punjab’s total outstanding liabilities will reach Rs 2.82 lakh crore, which will be a dire 53.3% of the GSDP. Only Arunachal Pradesh and Jammu and Kashmir, two territories that have never historically been looked as economically robust, fare worse than Punjab. Take them out of the picture and one finds that out of all the major economically advanced states, Punjab has the worst track record.

What’s worse is that the debt situation keeps worsening by the day. As per FY21 revised estimates, the state’s revenue receipts barring borrowings were chalked up to be Rs 72,052 crore. At the same time, the debt servicing expenditure- debt repayments & interest payments- have been reported at Rs 58,071 crore. What this means is that debt servicing is eating away at a whopping 80% of the revenue receipts net of borrowings. No surprise then that the Punjab government has to rely on borrowings to support its revenue stream. Consider, for instance that in FY21, the borrowings (at Rs 70,167 crore) were almost as high as the revenue receipts (Rs 72,052 crore).

Amping up AAP’s populist measures – the kind that worked wonders in Delhi – will only deteriorate the economic prospects of Punjab further unless the Bhagwant Mann-led government finds a way to dramatically raise revenue receipts for the state or cut down on the expenditures. Executing any of the two prospects will come with a financial bite for the people and run against AAP’s poll pitch. What will AAP do?