The Budget After Demonetisation: How to Better Plan Government Expenditure

In the 2017 Budget, the government has the opportunity to correct its misguided approach to spending and focus more on the social progress side of development. 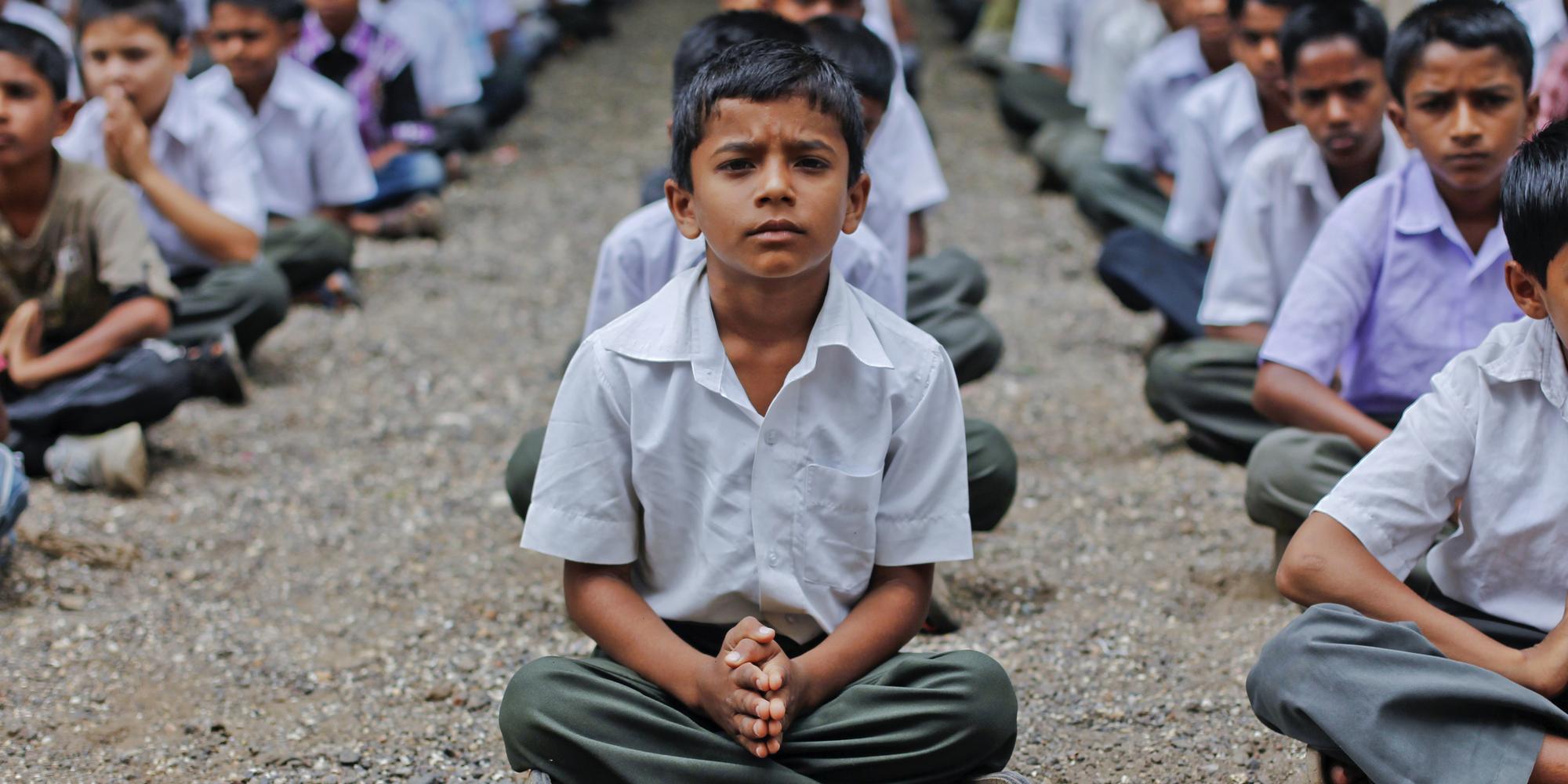 Will expenditure on primary education increase in this Budget? Credit: Danish Siddiqui/Reuters

This is the second article in a two-part series on possible Budget scenarios after demonetisation. Read the first part here.

“I cannot undertake to lay my finger on that article of the Constitution which granted a right to Congress of expending, on objects of benevolence, the money of their constituents.”

For a large developing country like India and as one of the most unequal countries in the world – currently marred by sharp differences in income inequality (acknowledging that less than 1% of Indians hold almost 60% of the country’s wealth) – I would rather bend more towards a more New Keynesian school of academic thought, attributing more faith in the effectiveness of a countercyclical monetary policy or fiscal policy in correcting for fundamental issues behind swelling rates in income inequality.

The previous article in this Budget series looked at some of the structural fault lines visible in India’s tax structure that could potentially be addressed by the Union finance minister in his upcoming Budget presentation on February 1. In this part, I turn my attention to discussing some fiscal questions emerging from the government’s somewhat misdirected approach in allocating and executing budgetary outlays over the heads of developmental and non-developmental expenditure.

Some of these pertinent questions are: Do the outlays of budgetary allocations necessarily transform into effective outcomes under these allocated areas? What could be some of the key prospective areas for the government in 2017 and ahead to focus on while increasing its targeted spending? To what extent does an increase in government spending causally relate to improving economic efficiency?

The first question on outlays vs outcomes is critical for a number of reasons. While the process of budget management in India may involve a more intensive exercise of budget formulation, budget execution and budget reporting, the effectiveness of the entire process ultimately lies in the execution of outlays reported in the budget presentation through the outcomes achieved. For India, where projected outlays on anti-poverty programmes, literacy programmes and other social welfare schemes are closely monitored, it is inexplicable how few questions are asked on targeted outcomes achieved from the actual expenditure disbursed by the Union finance ministry to the respective ministry and the expenditure incurred by the given ministry.

The outcomes lying in anticipated, tangible results cannot merely be defined in terms of monetary units, but require a more in-depth qualitative and quantitative assessment listing the achievements and failures involved with an increase or decrease in budgetary outlays. The process of outcome budgeting remains key for maintaining transparent accounting standards and improving economic efficiency in the financial service delivery process as well.

Let’s take an example here to explain what I mean by outcome assessment: if ‘x’ amount of money has been allocated for constructing ‘y’ number of primary schools to educate ‘z’ number of children, it becomes prudent to both qualitatively and quantitatively assess if the ‘x’ money allocated has actually led to the construction of ‘y’ number of primary schools and whether ‘z’ number of children are able to seek education up to the primary level. In a step ahead, the effort can then be to qualitatively assess the learning outcomes attached with the primary school education received by these ‘z’ number of students. Therefore, unless these outcome metrics are formulated and analysed, it becomes extremely difficult to put any faith in the announcements made during the presentation of the Budget.

If we closely observe two of the sub-overheads – medical, public health, family welfare and education, and sports and culture – both these overheads see a significant decrease in overall spending between the 2010-14 period in comparison to 1990-98. As the need for primary education and medical healthcare coverage expanded, the allocated expenditure in the Budget outlay has not kept pace with these overheads even after taking into consideration the fact that over the last decade the private sector has increased investment in both these segments significantly.

However, an increase in private sector expenditure only partially deals with the low public expenditure ratio problem (for education and healthcare) as a percentage of GDP; as one of the critical problems of a lack of access of primary healthcare and education in rural and remote areas still subsists, warranting a visible hand of the state (discussed in an earlier article).

These trends also further explain why India ranks dismally across all most social progress measurement indices, because of a poorly nourished, illiterate human capital lacking access to adequate primary healthcare. Facts in this regard are hardly cited in any macro-policy discussion or is a part of any mainstream media coverage.

As per the Social Progress Report 2016-17, India is listed under the category of “Low Social Progress” countries of the world with a score of 53.92 (out of 100) in the Social Progress Index; and is ranked at 98 below countries like Cambodia (97), Senegal (96), Botswana (62), Nepal (95) and others. The figure below helps us in capturing India’s low social progress scenario in relative comparison with other global economies (on a scale comparing a country’s GDP per capita with its social progress performance). 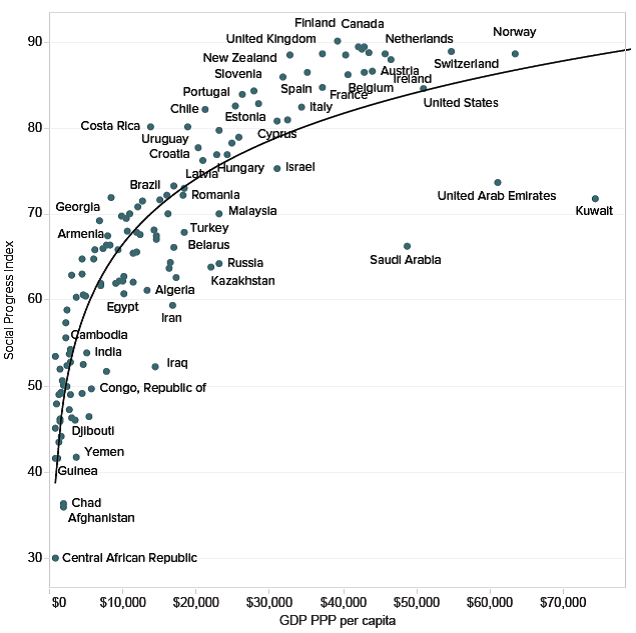 The third question on whether increasing outlays necessarily guarantees increased efficiency has been an important academic debate, not only amongst the (New) Keynesians vis-à-vis other academic scholarships but in the overall public finance literature. It is extremely hard to provide any kind of a black and white answer to this.

A mere increase in healthcare funding does not necessarily ensure intended outcomes to be in place without addressing the structural weaknesses in governmental institutional capacities. A robust growth in per capita income, infrastructural support, literacy rates and so on all drive health outcomes. What matters is a good, transparent and accountable public sector management system that seeks to build on enhancing institutional capabilities in making government expenditure effective. This is critical for the state in addition to acknowledging answers to both: the first question (via outcome budgeting) and second question (substantially increasing public expenditure in primary healthcare and education).

As the central government in India clearly emerges as the one of the country’s largest corporation in India Inc. (if it expands to include public sector) running on resources collected from an average citizen’s income, it is vital to account for and study whether an increase in government spending across various social welfare schemes remains causally linked with an increase in socio-economic performance within the targeted areas. The use of word causal here is important as a mere correlation between increased spending with increased efficiency may or may not necessarily be backed by empirical validation or proof.

Additionally, decentralisation of key functions strengthens public sector management by improving organisational capacity building amongst all stakeholders involved (all central, state and municipal governments). Albeit, while decentralisation may generally involve a diminished role for the central government in the service delivery mechanism, certain functions are likely to be most efficiently undertaken at the central level: research and dissemination of research findings, health information, regulation, standards, accreditation. Therefore, even the process of decentralisation requires a strong central capacity to transparently monitor and enforce the requisite standards and regulations.

A rate of higher economic growth is indisputably a strong measure of a country’s economic performance. However, a model of development based solely on economic progress without social progress is incomplete. The visible hand of the state remains vital in accumulating adequate revenue through a robust tax structure (discussed earlier) to provide for basic human needs, protect the natural environment while equipping citizens with a dignified quality of life (through access to healthcare and education). Any other model projecting “development”, while excluding this inclusive social process in action is likely to remain marred under a state of exacerbating socio-economic inequalities in the future.