The government seems to have put all its eggs in the infrastructure investment basket to revive growth and employment. 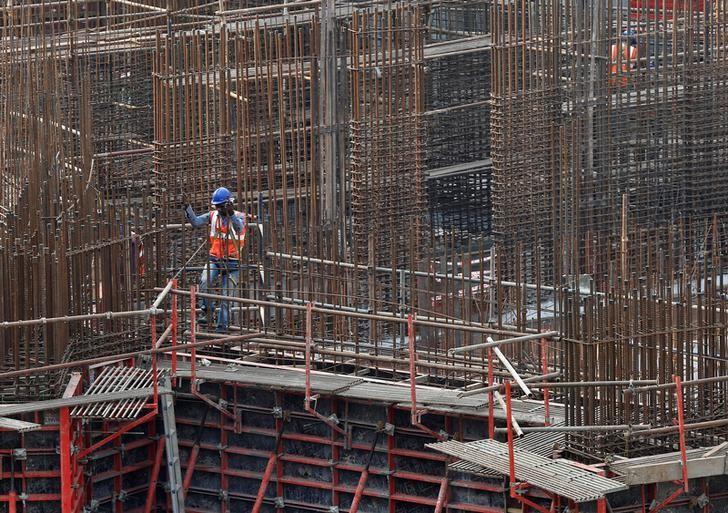 Representative image. A man works on a construction site of a residential building in Mumbai, India, October 31, 2016. Photo: Reuters/Shailesh Andrade

The Union Budget for 2022-23 can be seen as Prime Minister Narendra Modi’s last-ditch attempt at reviving private sector investment, which has stagnated for eight years. It must be worrying Modi that he is close to finishing a decade as prime minister, and his legacy could be remembered for poor growth in incomes, private investment, employment, savings and capital formation ― the most unenviable record for any prime minister since reforms began in 1991.

With higher revenue mobilisation and the government asset monetisation programme, the Budget aims to give a big push to public investment in infrastructure under the National Infrastructure Pipeline programme, which has identified specific projects in which Rs 20 lakh crore is to be invested annually for five years. This is the cornerstone of what finance minister Nirmala Sitharaman described as “crowding in private investment” through massive capital investment by the government. This is the core initiative to revive growth and employment. But will it succeed?

The budget allocates a 35% increase in funding for infrastructure, with Rs 7.5 lakh crore for 2022-23. It hopes that state governments will contribute their share of infrastructure funding under the PM Gati Shakti project, which aims to monetise government assets to fund new infrastructure projects earmarked in the National Infrastructure Pipeline. But to what extent will the “crowding in of private investments” be triggered by the government’s big public investment push?

The key risk flows from rising global inflation, which is at 30 year highs, and moves by central banks in the developed world to rein in liquidity and raise interest rates rapidly in 2023. The US Federal Reserve intends to raise interest rates three or four times to combat inflation, which can be the biggest dampener for growth and employment. India cannot be insulated from this broader trend and assumptions of GDP growth and employment generation based on massive infrastructure investment cannot but be impacted by global liquidity conditions and inflation.

Also read: In Budget 2022, the Worst of Both Worlds

Keep in mind that of the Rs 20 lakh crore earmarked for annual infrastructure funding, only half comes from the central and state governments. The rest has to be garnered from the private sector, largely from foreign direct investments. India may need nearly $100 billion annually from long-term pension funds and sovereign funds to finance its National Infrastructure pipeline. Such foreign financing may not be easy to come by in a year of hyper global inflation with the US Fed raising interest rates and simultaneously accelerating the withdrawal of its bond-buying programme.

The years 2020 and 2021 were sweet spots for Indian companies, which raised billions of dollars of cheap money on the back of unprecedented injection of liquidity by global central banks responding to the pandemic. That liquidity honeymoon is over, for all practical purposes. For instance, one doesn’t really know to what extent global pension funds will participate in India’s asset monetisation programme, which is linked to financing new infrastructure projects.

The other weakness in the Budget is that it remains highly dependent on oil tax for revenues. Last year, the government told the Lok Sabha that the Centre’s annual revenue collection from petrol and diesel taxes had increased 300% in recent years. If global oil prices go up to $120-130, which many experts have forecast, the government would be forced to reduce oil taxes to ensure that domestic prices of petrol and diesel don’t hit stratospheric levels. Already, domestic prices are highly elevated. Further increases may become politically counterproductive as 2024 approaches. This is another big risk to the revenue assumptions in the budget.

The rising energy and commodity price cycle could derail all key budget numbers. Inflation has a way of eating into everything. For instance, the budget projects a nominal GDP growth of 11% in a year of hyper global inflation. If inflation (a GDP deflator in this case) turns out to be 7-8%, which is quite likely, then real GDP could slide back to 3-4%. The finance secretary hopes the GDP deflator may not be so high in 2022-23. But that’s just hope!

Finally, the government seems to have put all its eggs in the infrastructure investment basket to revive growth and employment. The economy is badly hurting after the pandemic and survey after survey show income losses among the bottom 80% of the population. Even pro-market economists openly concede this. CitiGroup Chief Economist Samiran Chakraborty said the top 20% of India is in a virtuous cycle and the 80% below are in a vicious cycle. The budget hardly addresses this schizophrenic behaviour. There is nothing in it for the immediate needs of the bottom 80%, hit badly by the pandemic.

The Budget simply hopes the big infrastructure investment push will eventually lift all boats. The finance minister talked about India being in a 25 year virtuous cycle of “Amrut Kaal”. The more important question is whether the poor will survive this slow-release dose of Amrut.