Income and corporate tax collections are likely to miss FY'2020 targets by as much as Rs 1.5 trillion, while indirect taxes may fall short by about Rs 50,000 crore. 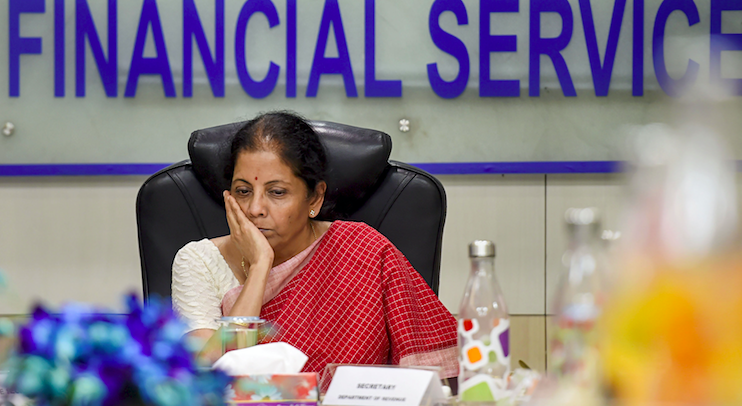 New Delhi: Tax collections in the current fiscal may fall short of targets by as much as Rs 2 trillion on faltering economy, leaving a very little room for finance minister Nirmala Sitharaman for offering any meaningful reduction in personal income tax rates.

Sources with direct knowledge of the development said income and corporate tax collections are likely to miss FY’2020 targets by as much as Rs 1.5 trillion while indirect taxes may fall short by about Rs 50,000 crore on drop in the Goods and Services Tax (GST) in a sluggish economy.

Expectations were that Sitharaman, who had in September 2019 cut corporate tax rates to their lowest to boost economic growth, would announce similar sops for individual taxpayers.

In October 2019, senior economist Bibek Debroy, who serves as chairman of the Prime Minister’s Economic Advisory Council, told The Wire in an interview that sizeable cuts in income tax rates would happen sooner rather than later.

Business TV channel CNBC-TV18 reported this week that the finance ministry is considering various options, some of which include raising the exemption limit from the current Rs 2.5 lakh.

The problem however is that lower than expected tax collections and the government missing uts disinvestment target by a wide margin would limit Sitharaman’s largesse.

The exchequer was shaved off Rs 1.45 trillion as the government slashed corporate tax rates up to 10 percentage points, the biggest reduction in 28 years.

Base corporate tax for existing companies has been reduced to 22% per cent from 30%, and to 15% from 25% for new manufacturing firms incorporated after October 1, 2019, and starting operations before March 31, 2023.

Besides, the government withdrew the enhanced surcharge on long- and short-term capital gains for FPIs as well as domestic portfolio investors. This resulted in revenue implication of Rs 1,400 crore.

Since August 2019, the government announced other measures having some revenue implication in its effort to stimulate the economy.

Also read: Budget 2020 May See Even Official Fiscal Deficit Targets Loosened, but by How Much?

There are constraints not only on direct tax side but indirect tax collection is also under stress due to slowdown, sources said, adding, the moderation in demand will surely have bearing on the Goods and Services Tax (GST) collections and customs too.

The shortfall on the indirect tax side would be at least Rs 50,000 crore by any conservative estimate, sources added.

Several experts including former finance secretary S.C. Garg have indicated at tax shortfall between Rs 2 lakh and 2.5 trillion during the current fiscal.

Of this CIT is expected to contribute Rs 7.66 trillion and PIT Rs 5.69 trillion in 2019-20. With regard to indirect tax, total amount budgeted as receipts for GST is Rs 6.63 trillion for the current fiscal.

Total customs revenues were budgeted to bring in gross receipts of Rs 1.56 trillion while excise expected to garner Rs 3 trillion during 2019-20.